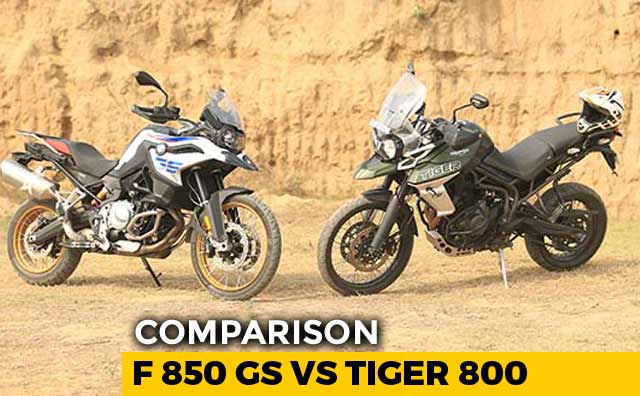 BMW Motorrad has launched two middleweight adventure bikes - the BMW F 750 GS and the BMW F 850 GS at the Auto Expo 2018. The F 750 GS is priced at Rs. 12.2 lakh (ex-showroom, Delhi) and the F 850 GS is priced at Rs. 13.7 lakh (ex-showroom, Delhi). The deliveries will begin in the second half of 2018 while BMW Motorrad has started taking the bookings for the bikes. Both bikes share a new 853 cc, parallel-twin engine but have different states of tune and will have slightly different personalities. According to BMW Motorrad, both bikes will be targeted at different buyers and will be offered as completely built units (CBUs) in India. The F 750 GS and F 850 GS are compact and lightweight and offer a slightly smaller and lighter alternative to big adventure touring bikes like the BMW R 1200 GS.

The new 853 cc, parallel-twin engine has a 270-degree firing order giving it a torquey feel with low- and mid-range grunt. With two balancer shafts, the engine is also expected to be a smooth and refined mill, with the torque spread out over low- and mid revs. On the 750, the engine is tuned to produce 77 bhp and 83 Nm, while on the F 850 GS, the engine makes 85 bhp of power and 92 Nm of peak torque. The F 750 GS gets alloy wheels, while the F 850 GS will get wire spoked wheels. Both bikes get an all-new frame, new suspension set-up with the option of semi-active electronic suspension which constantly adapts and changes to the changing surface on which the bike is ridden on. The BMW F 850 GS weighs 229 kg. It gets ride by wire, offering a choice of two riding modes (Road and Rain), with optional packages extending the riding modes to Dynamic, Enduro and Enduro Pro.

The BMW F 850 GS gets two riding modes - Rain and Road, together with ABS and automatic stability control (ASC), and these features are carried over to the Adventure variant, but it adds more customising options, including Dynamic, Enduro, and Enduro Pro riding modes. There's also electronic suspension, dynamic traction control, as well as a 6.5-inch TFT colour display, and an intelligent emergency call system. The BMW F 850 GS offers four seats with different heights. The standard model is 860 mm while the other options are 815 mm, 875 mm and the tallest seat, which has a height of 890 mm.

BMW Motorrad showcased the F 850 GS Adventure a few months ago which is more off-road and touring friendly variant of the F 850 GS. On the F 850 GS Adventure, the differences are more in features than purely technical, adding more comfort and capability. The new Adventure model gets a 23-litre fuel tank, and at the front is an adjustable windscreen, along with adjustable gear and brake levers. The engine is protected by a crash bar, and also standard is a luggage rack at the rear. There is no word on whether BMW will launch the F 850 GS Adventure in India or not.