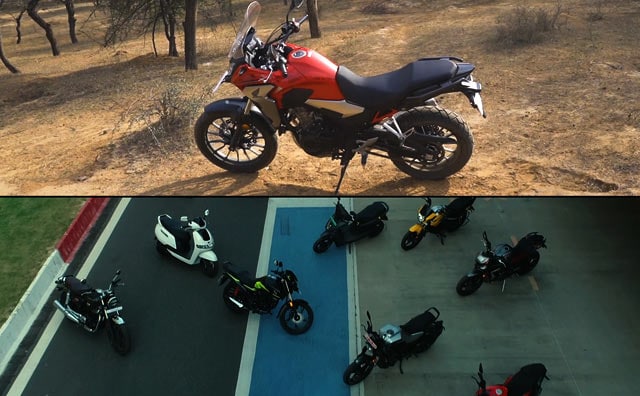 The Honda CB500X is a mid-size adventure tourer from Honda which has been launched in India. Internationally, Honda has several different models, including a Honda CB500F sport tourer, as well as the Honda CMX500 Rebel cruiser. The CB500X is designed to be an easy-to-use, accessible and approachable mid-size adventure bike, built for new riders. Primarily to be used for touring, the CB500X is also designed to take on mild off-road work. The Honda CB500X promises to be a capable touring option, built for both the urban commute, as well as long distance adventures. Equipped with an upright riding position, a tall windscreen, and decent ground clearance and suspension travel, the CB500X is not meant for hard-core off-road riding, but can take on the occasional ride into the unknown, even when the tarmac ends.

The Honda CB500X is powered by a 471 cc, parallel-twin engine which makes 47 bhp at 8,500 rpm and 43.2 Nm of peak torque at 6,500 rpm. The eight-valve engine is expected to be refined, and with a slick-shifting 6-speed gearbox, aided by an assist-and-slipper clutch, the CB500X should be easy to ride in traffic, or will be up for some sporty and aggressive downshifting as well.The Honda CB500X gets a 181 mm ground clearance, which should be adequate for all kinds of adventures, and even the occasional gravel road venture. The 830 mm seat height is complemented by narrow seat shoulders near the fuel tank to help riders of different height become comfortable with the stature. Kerb weight is 199 kg, and with a fuel tank capacity of 17.7 litres, range is expected to be quite good.

Priced at Rs. 6.89 lakh (Ex-showroom, Gurugram), the Honda CB500X isn’t exactly the affordable adventure tourer. If it had a slightly lower price tag, possibility around Rs. 6 lakh, it could have had lots of takers lining up at Honda Big Wing showrooms. The CB500X will primarily go up against the Kawasaki Versys 650, which is priced at Rs. 6.94 lakh (Ex-showroom). But at that engine size and price bracket, the Honda CB500X will also face competition from the Benelli TRK 502 which is priced considerably lower at Rs. 4.79 lakh (Ex-showroom).