Renault K-ZE is essentially the production version of the Kwid EV, which was revealed at this year’s Auto Expo in February. Before making its India debut, the car was initially revealed at the 2019 Shanghai Motor Show in China. The new K-ZE is based on the Kwid’s CMF-A platform. Though the electric version is limited to the Chinese market, it is being evaluated for the other global markets like European. However, the carmaker won’t be launching the EV there any time before 2021.

When compared to the regular Renault Kwid, the City K-ZE electric car undergoes some changes to the underpinnings for housing an electric motor as well as the battery packs. The electric hatch gets a 33-kW motor that is tuned to produce 120 Nm of peak torque. The carmaker also claims that the car can be charged via standard 220V charging port as well as plug charging points.

The City K-ZE EV can be charged up to 80 per cent in just 50 minutes by employing fast charging mode. On the other hand, the slow charging mode will take at least four hours to fully charge the batteries. The company also claims that the estimated range of the EV is around 240 km when fully charged.

Aesthetically, the Renault City K-ZE is very similar to the Kwid small car. And, it also borrows several elements from the concept version. The company has slightly tweaked the grille sporting a large diamond logo at the front. Further complementing the design are sleek yet sharp LED headlamps. The Kwid EV also uses the split headlamp design which has become very popular. The profile of the SUV is highlighted by elegantly styled alloy wheels. The City K-ZE is offered lower ground clearance of 150 mm in comparison to the standard Indian version.

As far as the interiors are concerned, the cabin of the K-ZE EV is very identical to the India-spec Kwid. It comes with an 8-inch touchscreen infotainment system, 4G internet with navigation and voice control. The overall layout of the cabin also remains the same. However, the K-ZE gets the drive selector between the front seats instead of the centre console, which seen on the AMT version of the Kwid. 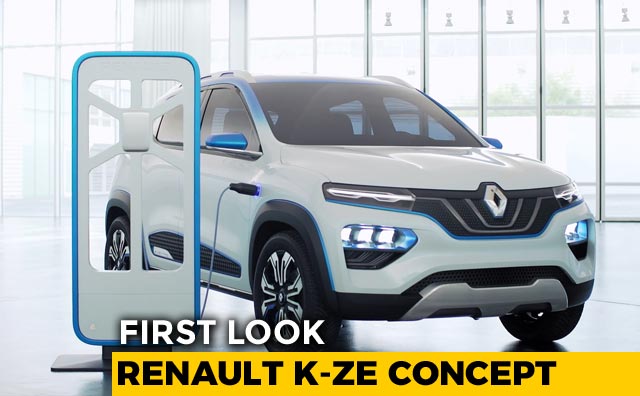