The race-only 250 cc sportbike is priced at 9,700 Euros, and designed for Italy's aspiring two-wheeled racers. 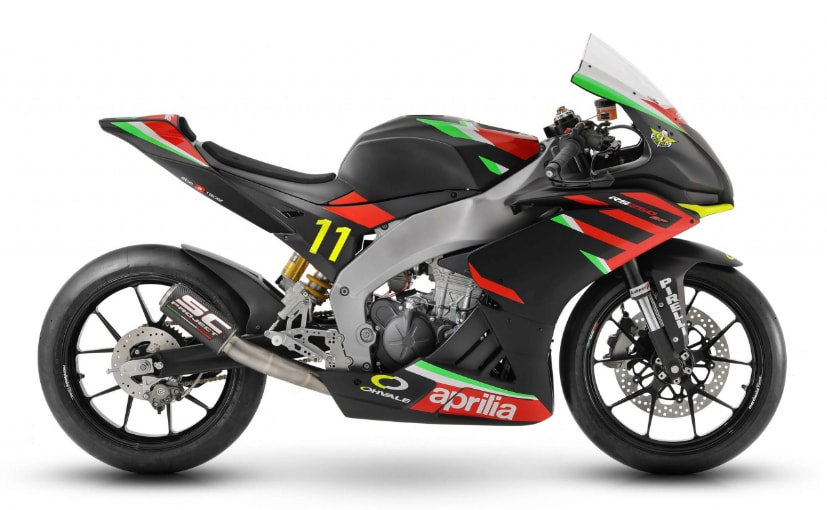 Aprilia has announced prices for the company's quarter-litre track-only sportbike, the Aprilia RS250 SP. The 250 cc sportbike, which was showcased at the EICMA 2019 show, will be sold in Italy for 9,700 Euros (around ₹ 8 lakh), plus additional taxes. The race-spec motorcycle has been built by Aprilia in collaboration with Ovale, as well as Italy's motorcycle federation, the FMI, and targeted at budding motorcycle racers, looking to establish a career in two-wheeled racing. The RS250 SP will compete in a spec-series in Italy next year, a sort of one-make series.

For the price, what is offered is forged aluminium wheels from Marchesini, a rear shock from Ohlins, forks from Andreani, an exhaust from SC Project, Brembo brakes, a racing slick tyres from Pirelli. The 250 cc, single-cylinder, four-stroke engine makes around 28 bhp, not eyebrow raising performance, but still adequate for beginners on a racetrack, and for training. But being a track-focussed racebike, the RS250 SP skips usual components like headlights, turn indicators and rear view mirrors.

With 105 kg dry weight, the Aprilia RS250 SP is quite light, the one-make championship the bike will be used for, will provide a stepping stone for young riders to move into Moto3. So far, there's no word on any plans of Aprilia introducing a road going version of the RS250 SP, and considering it's designed to be ridden by riders from ages 11 and over, it's expected to be a compact, and relatively small package for full-sized adults to have a go!