Aah well, the road to Spiti not less travelled anymore, but it was a first for a Hyundai Venue! As part of 2019 Hyundai Great India Drive, we took the Hyundai Venue subcompact SUV to Spiti in Himachal Pradesh! And what a blast it was. 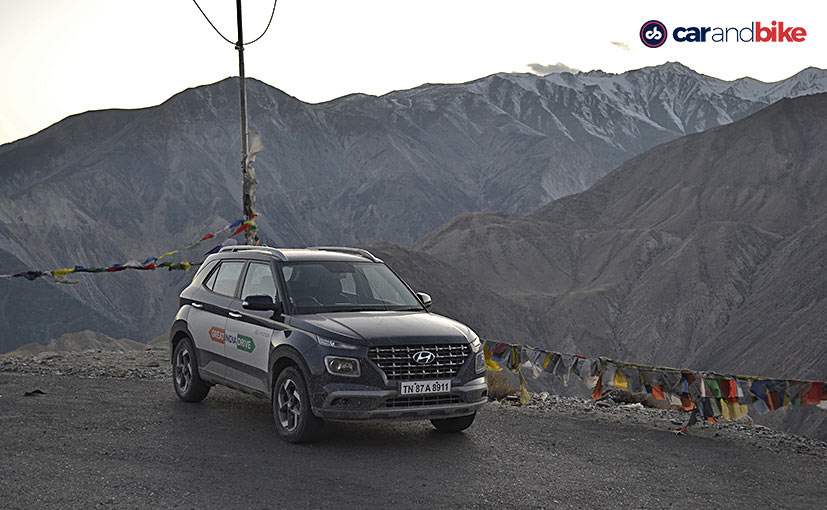 India is a country blessed by the gods! There is so much to see, so much to experience, so much to share across the length and breadth of our great nation. And a sincere attempt to document this phenomenon is the Hyundai Great India Drive! For the 2019 edition, we had the capable Hyundai Venue subcompact SUV as our ride. There were 17 different locations across India that had to be covered and we were the lucky ones to have gotten one of the most scenic drives of them all. The Spiti Valley!

As I moved my luggage into the Hyundai Venue, I was thinking to myself, only a madman would drive up to Spiti thrice in a year! Yes! It was my third time to Spiti in 2019 and somehow, I was only looking forward to it! I like the sea but the mountains! They have my heart and soul. I can't possibly string words together that could meaningfully describe the elation in my heart, when I see mountains. 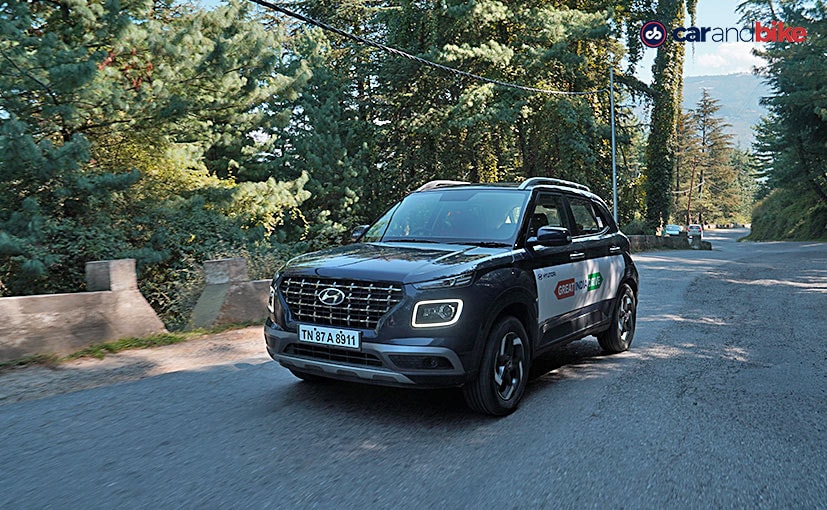 So, out of my reverie, I start the engine, engage the first gear, put the pedal to the metal and start driving off in the direction of Shimla, the queen of the hills! While Shimla itself is pretty, the process of getting in and getting out is quite a challenge. Narrow road, spilling over with cars, two-wheelers, pedestrians is not something one would like. Our true journey started once we crossed Shimla and took NH-05 that went to Kaza via Kinnaur and Spiti districts. On the way, we saw the Apple orchards starting from Kufri and continuing till Narkanda. This is where one sees mountains dotted with firs, pines and deodar trees, making for a sensory delight. The idea was to cover half the way till Kaza, shoot on the go and get enough rest for the night! We stopped at a restaurant with a view for a late lunch. A quick supper of crispy parathas and piping hot chai later, we made our way to Rampur Bushahr, which was our stop for the night. 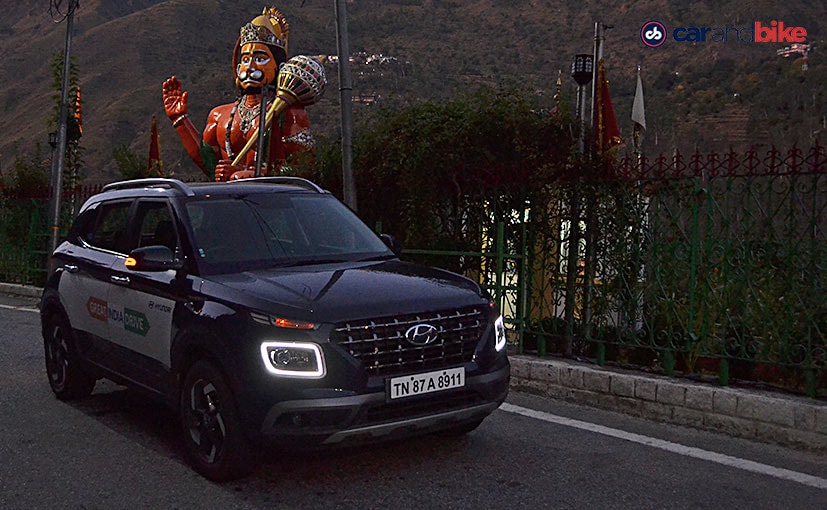 (We took blessings of Lord Hanuman, praying for a safe journey, getting out of Rampur early in the morning)

Getting a good night's sleep was essential because the next day was going to be a rather long one. Well rested, we began early in the morning, snaking up NH05, taking the blessings of the mighty Lord Hanuman on our way to Kaza. The roads in Himachal are metalled till one crosses over to Spiti district. One of the highlights was to go through the iconic tunnel carved out of the mountain. 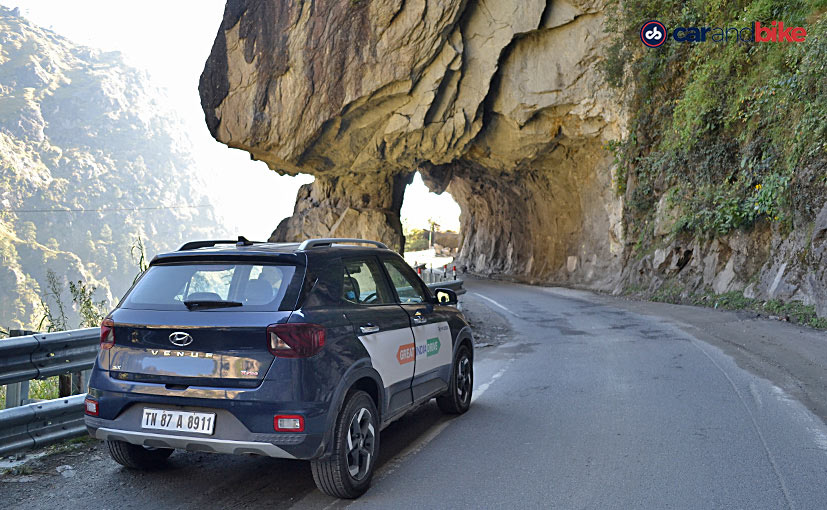 (The famous tunnel carved out of a mountain on NH-05 in Kinnaur district. We had to stop and take a photo here!)

The NH05 turns into the old Hindustan Tibet road from Powari onwards and once you reach Ribba, a small village on NH05, the roads till Kaza are more or less non-existent. As you reach Karcham, a tiny town, one sees a strong army establishment, thanks to the Baspa and Rampur hydro-electric projects and the sensitive tri-peak area as well. No photography allowed meant that one could only take in the sights and store them in memories. We had the Sutlej/Baspa flowing right beside us all throughout as we made our way to upper Kinnaur Valley and then to Spiti. 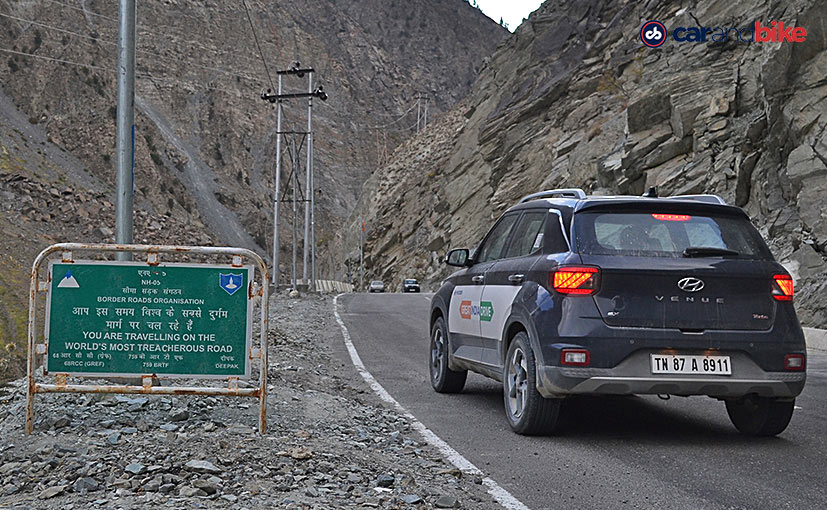 (While driving from Kinnaur into Spiti district, one comes across this terrifying road sign many times. Although the roads might be world's most treacherous, but the views took your breath away as well)

Our next photo stop was the Khab Bridge, which was also the spot where Sutlej and Spiti rivers met and joined to form the Sutlej, flowing towards Shimla. We were closest to the China border at this point, considering the distance as the crow flies. From Khab till Nako, we had to cross the Ka loops, where you start climbing the mountain and the roads narrow down, accommodating just one car, barely. But the view, it was beyond breath-taking! 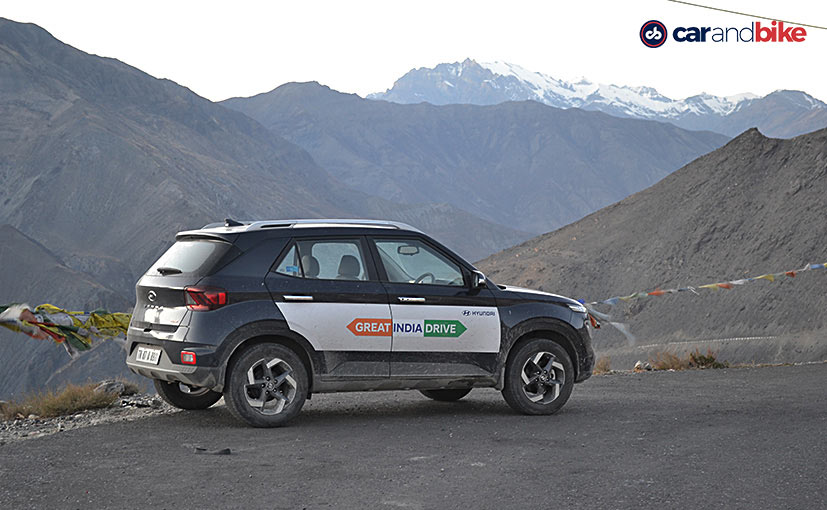 (Once you cross Pooh and make your way towards Nako, the drive is not only thrilling but you are surrounded by snow clad peaks all around)

We were surrounded by snow clad peaks all over and as one crossed Nako, believe it or not, the view got even better! Our camera crew became obsessed with the views and were determined to get some gorgeous shots of the Venue, till we reached Sumdo, the point where we finally cross into Spiti Valley and leave upper Kinnaur behind. Pooh to Sumdo is about 72 kilometres and this was perhaps the most dangerous stretch of them all. 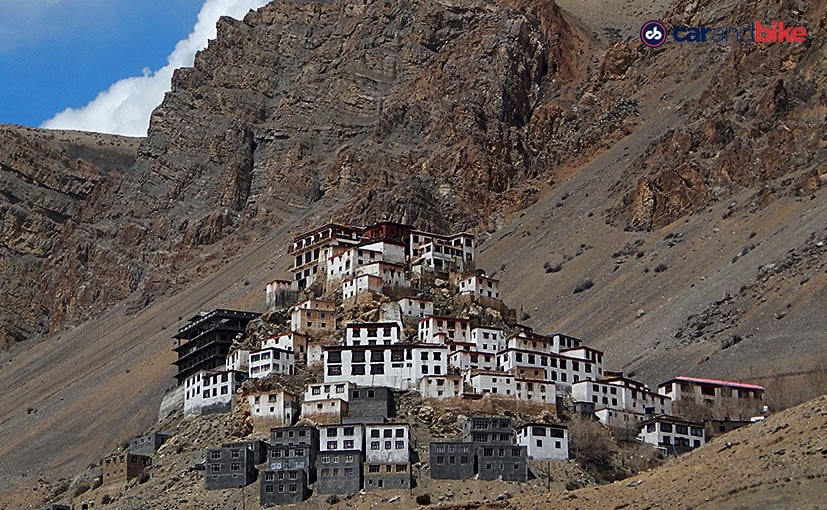 (The famed Key Monastery, nestled in the mountains! It is a sight to behold and is one of the most beautiful monasteries in Spiti Valley)

Sumdo to Kaza was a four hour drive and unfortunately, we had to do this in the dark as all of us got carried away by the fantastic views we just left behind. Although we strongly suggest that you stay back at Nako, if you feel you won't be able to reach Kaza before twilight. The cold, crisp mountain air felt refreshing and kept us going, even in the dead of the night, till we reached Kaza at about 9pm. The night drive in the mountains was worth it! 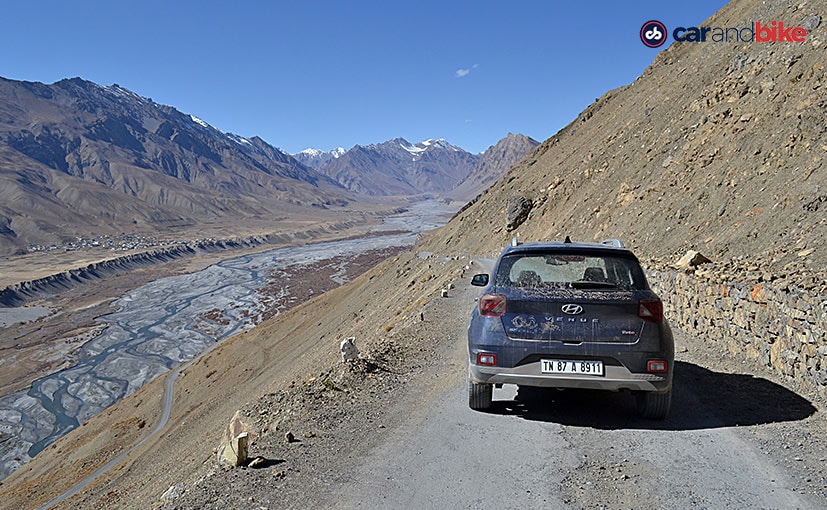 (The climb up from Kaza to the three villages of Komic, Langza and Hikkim literally makes you feel on top of the world )

The previous night we checked into a lovely hotel, run by a former automotive journalist and had our fill of food and rest! The next morning, we woke up fresh and early, heading towards the villages of Komic, Hikkim and Langza! Even though the distance from Kaza to Komic is just 20 odd kilometres, the climb itself is quite deadly. 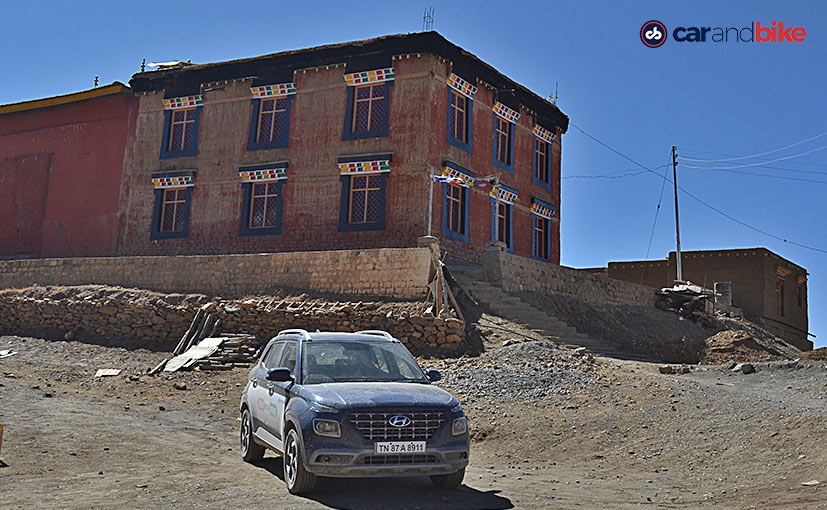 (The Hyundai Venue poses with the Sakya Tangyud Monastery in the backdrop! It is one of the highest monasteries in the world, built at 13,943 feet above mean sea level)

But, once you break through the clouds, the view is literally to die for. First we headed straight to the Sakya Tangyud Monastery, which was our final destination of the entire drive. At 4,250 metres or 13,943 feet, it is also one of the highest monasteries in the world! Built under Mongol patronage sometime in the 14th century, it is an 800 year old monastery which is one of the only two monasteries belonging to the Sakya sect of Buddhism in the Spiti valley. 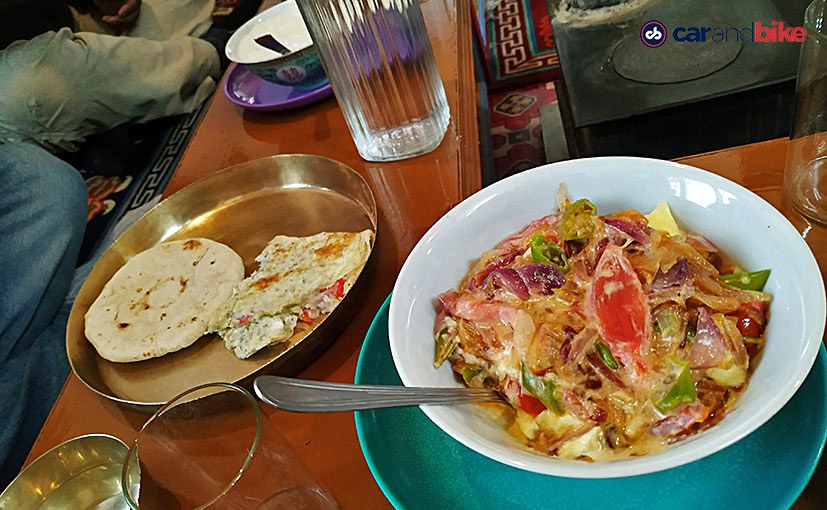 (Once at Kaza, we also tried some local delicacies. Seen here is a yogurt chutney with vegetables and a local variety of bread)

Inside, there is a stuffed snow leopard which is said to ward off evil spirits and bless the travellers and it is definitely a spectacle! We spent some time inside, listening to the chants and incantations recited by the chief Lama or the head priest. We thanked Lord Buddha for keeping us safe on our journey till here left to finish off our shoot of the Hyundai Venue and the monastery. 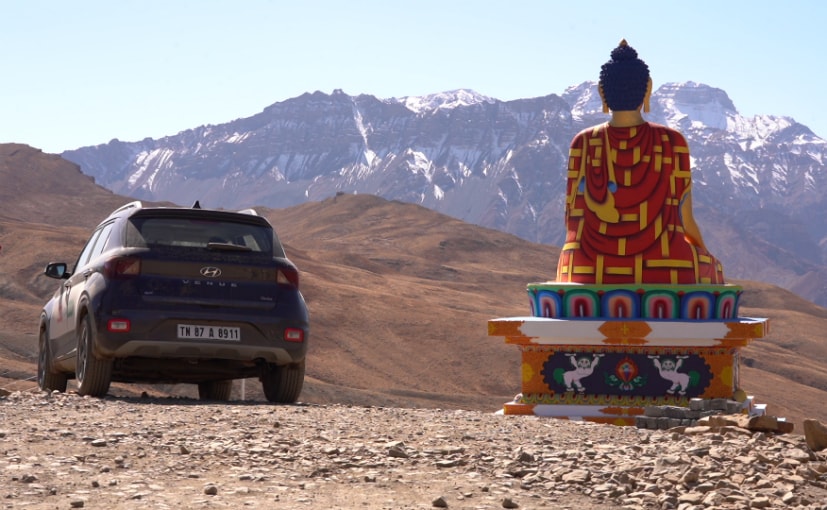 (The Hyundai Venue with the giant 'Medicine Buddha' statue at Langza village, which is famous for its fossils)

Next on our agenda was to head out to Langza, just a 15 minute drive from Komic. The giant medicine Buddha statue at Langza is world famous and even though it was built in 2013, it has become synonymous with the trio of villages up on the mountain. Locals say that it is the best place to see the sun rise and while we didn't have that opportunity, the Venue definitely looked pretty with the mountains and the Buddha in the backdrop. 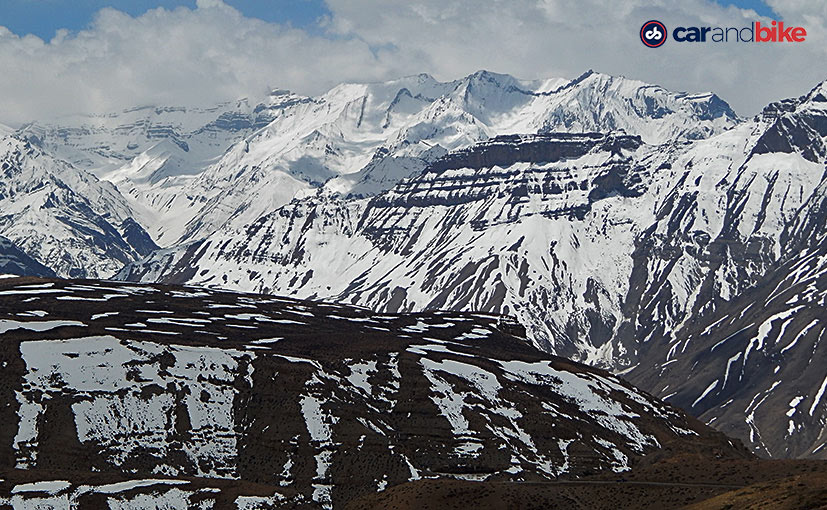 (Snow clad peaks, as seen from the Komic village, the highest village in Asia)

The other highlight was the fossils one finds in and around Langza. You would be surprised to know that Langza is known as the fossil village. The mountains in and around Langza and the Himalayas in general were formed because the Eurasian and the Indian tectonic plates clashed against each other many millions of years ago. The space between these two tectonic plates was the Tethys Sea. When the plates collided and Himalayas were formed, the abundant and rich marine life in the Tethys Sea ceased to exist. And the fossils of marine life can be found strewn around Langza like common pebbles. 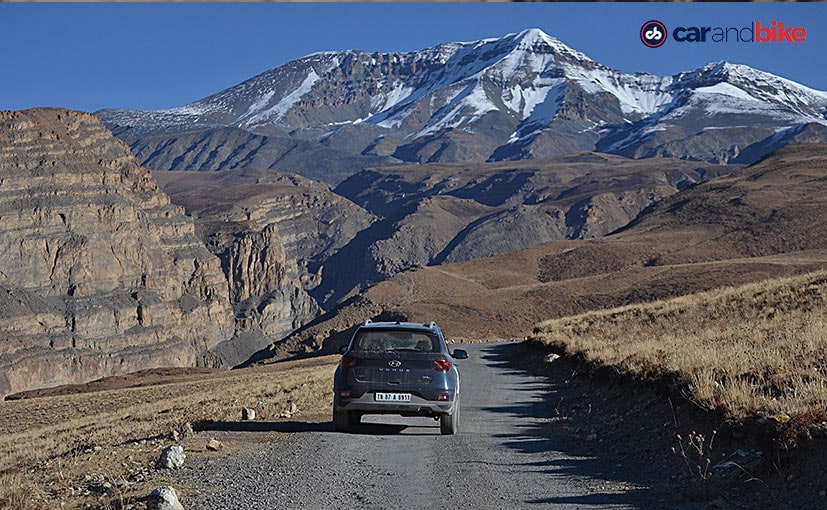 (With such views in front of you, one truly understands how insignificant we are, in the larger scheme of things)

Do remember that if you do find a fossil, do not carry it home with you as it is prohibited under Indian law. You will find locals selling you fossils which are easily over 150 million years old, for a few hundred rupees. It is best to refrain from buying them. Once we were done with the shoot, we still had half a day left and we thought it best to go back to our hotel and relax for the evening. 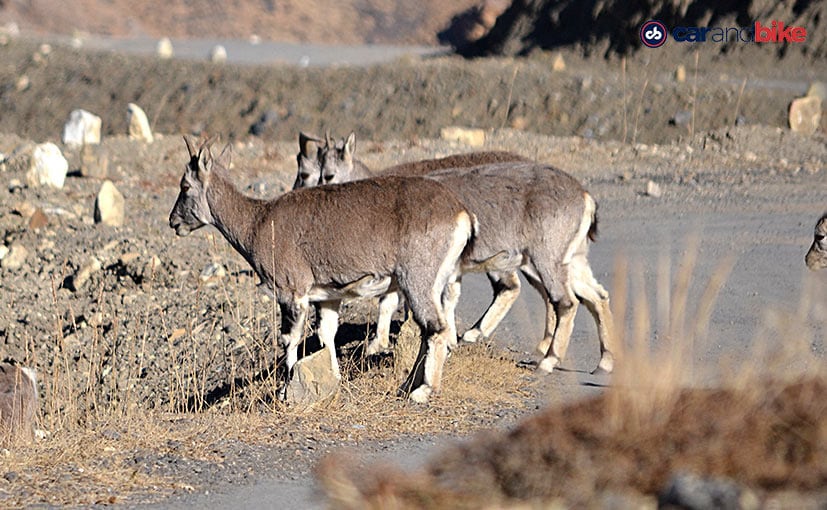 (Seen here are a couple of Himalayan Blue Sheep or 'Bharal'. They have significant population and are indigenous to the region)

As a wise man once said, times seems to fly when you are having fun and we had a whale of a time shooting in and around Spiti valley. It is still one of the few places which is relatively untouched from rampant commercialisation and we hope it stays that way for a long time to come. After our fun in the sun, it was time to head back to Delhi. We took the same route going back and this time we weren't stopping for the sights and sounds. The office beckoned and we had to heed its call! It was time to return to the dreaded drudgery of office life. 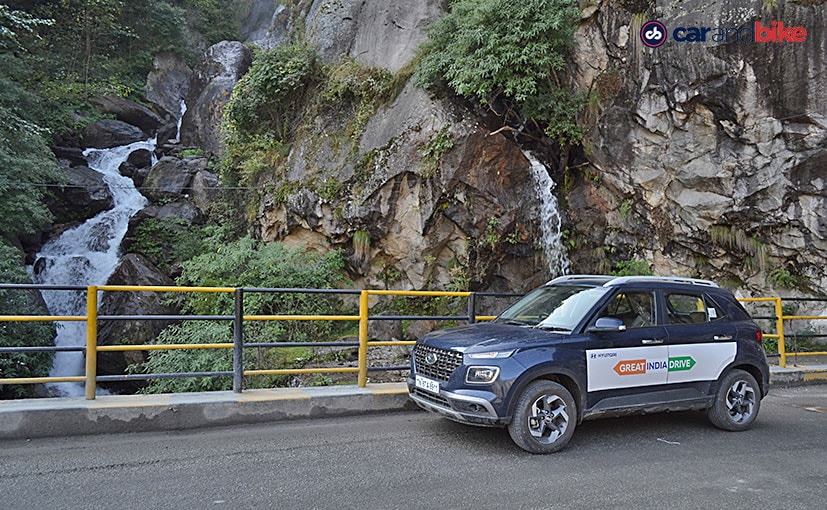 (The Hyundai Venue pleasantly surprised us with its capabilities, especially on tougher terrain)

The Spiti valley is tough and unforgiving! The temperature, the terrain and the altitude become one and in the blink of an eye, they can lay waste to best laid plans. But the mountain gods and Lord Buddha were kind and we made to Spiti and back without a hassle. The Hyundai Venue, it trundled along on bad roads, it didn't falter at those dizzying heights, there wasn't a rattle anywhere and it went in whichever direction we pointed it at. It speaks a lot about the quality of the Venue and yes, there are a few minor faults which can still be ironed out but the Venue proved to be a loyal companion and not once did we found ourselves tending to the car. Our 2019 Hyundai Great India drive was a smashing success and now we can only cross our arms and wait till the next edition of the Hyundai Great India Drive comes along.