We spend time with the flagship SUV from the BMW M Performance Division, in Arizona. Putting the new 3rd generation BMW X5 M Competition through its paces is easy - with a host of features designed to make this car a true M model. 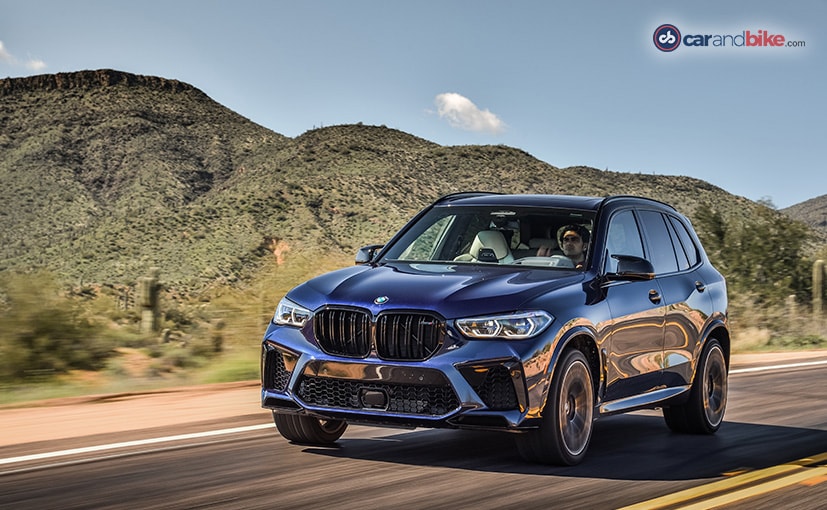 View Photos
We expect the BMW X5 M to be launched in India this year itself, probably around the festive season

The potent and powerful SUVs from the premium brands have been a growing market segment worldwide - yes even in the era of going green - more and more buyers seem to also want the adrenaline-enhancing, higher-riding cars, like the all new BMW X5 M and BMW X6 M. BMW's M Division had its most successful year in 2019, with sales up by 32 per cent over 2018. The new X3 and X4 M - as well as the M8 family arrived in 2019 too. So as the new BMW X5 M and X6 M hit the market, the expectation is that 2020 should better last year's numbers. The two SAVs as BMW likes to call them (Sports Activity Vehicles) are indeed the more powerful versions of the stock cars they are based on. And yes they are designed to take on everything from the Audi RS Q8, Mercedes-AMG GLE 63 S (and its coupe alter-ego), to the Porsche Cayenne/ Cayenne Coupe, and the Range Rover Sport SVR. Yes it is a formidable lineup of rivals. And so, it is important to see if they have the goods to match up - right? 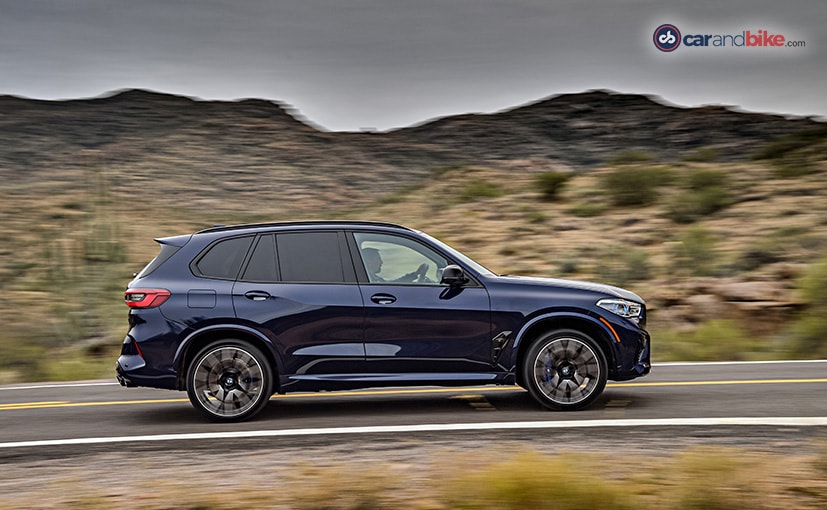 (The all-wheel drive system on the BMW X5 M is rear-biased, in order to keep the sporty driving character of the car intact)

I am in Scottsdale, Arizona in the southwestern United States to test these beasts. The two cars have identical drivetrains and are based on the exact same platform anyway - so there's little to separate them on numbers. In fact, the 4.4 litre V8 motor is tuned exactly the same in both. And they will both give you nearly 600 horses. But that's the X5 M and X6 M - what I have with me are the Competition models - so even more powerful - 25 additional horses. All the models use the 8-Speed gearbox and yes - adaptive dampers as well as the variable M xDrive or all-wheel-drive are also standard. The AWD is rear-biased to keep true to the BMW character, but you can opt for maximum traction to all four wheels. 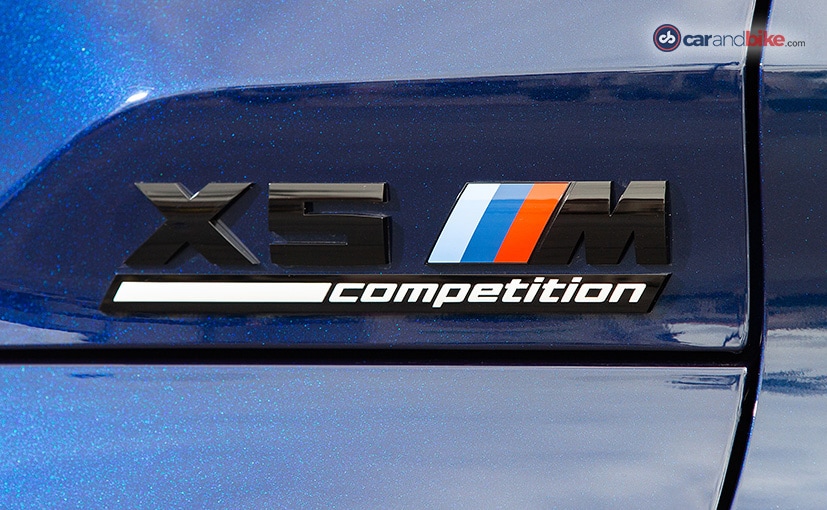 (The BMW X5 M does stand out, with 'M' badging strewn all around the SUV)

Now given that it will be the X5 m that is tipped to come to India, and not the X6 M - I shall be focussing more of my attention on the former. But I promise a bit on the latter too! So, the test car with me is the Tansanit Blue X5 M Competition. The car's looks build on the regular X5 but adds the M appeal and promise of performance in its styling. This means larger air intakes, M-badged gills on the side panels, new aerodynamic mirrors, rear diffuser, two pairs of twin exhaust tailpipes, a rear spoiler, and 21-inch wheels up front, 22-inch at the rear. The large kidney grille, and all the window garnish, and even the badging are all finished in black - to keep the car's sinister and potent feel going. 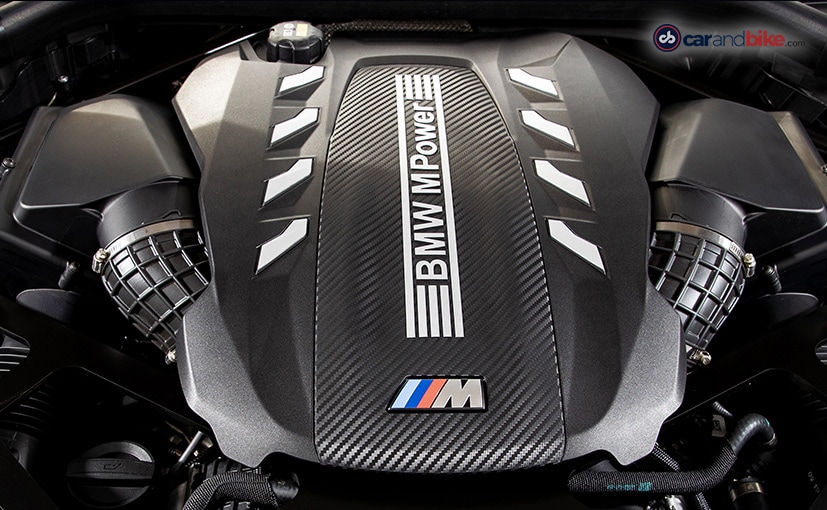 A quick look at its specs reveals not just all that power at 612 bhp, but also a meaty 750 Nm of peak torque that is available from 1800-5800 rpm. The car gets an M-specific chassis, and so like I told you already that means the Adaptive M suspension with variable damper control, M xDrive, Active M Differential, the M compound brakes with ABS and stability control, active roll stabilisation and the M Servotronic steering. Get it out on to the road and all of that comes to life. It does not take long for you to realise that this is a special car. 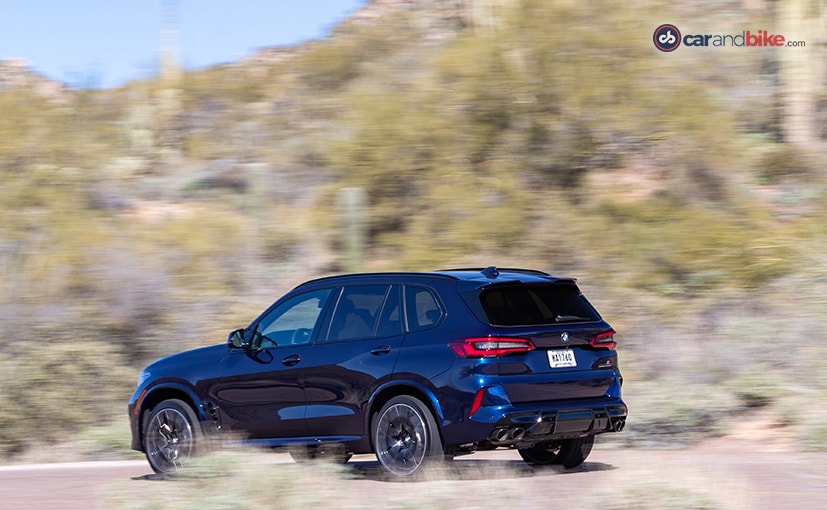 (With the X5 M, you get a very precise, sporty and dynamic car that loves being thrown around corners)

The engineering is near flawless, and its size belies its driveability. Yes, once again BMW has pulled off the kind of performance that you'd typically expect from a much lower riding car, with lesser weight and overall height. Defying physics seems to be the preoccupation of SUV developers these days - recent examples that have impressed and astounded - the Lamborghini Urus, Audi RS Q8 and the BMW X7. With the X5 M as well you get a very precise, sporty and dynamic car - which will hug corners, take on bends and fast lane changes, and move very quickly with no hint off hesitation. 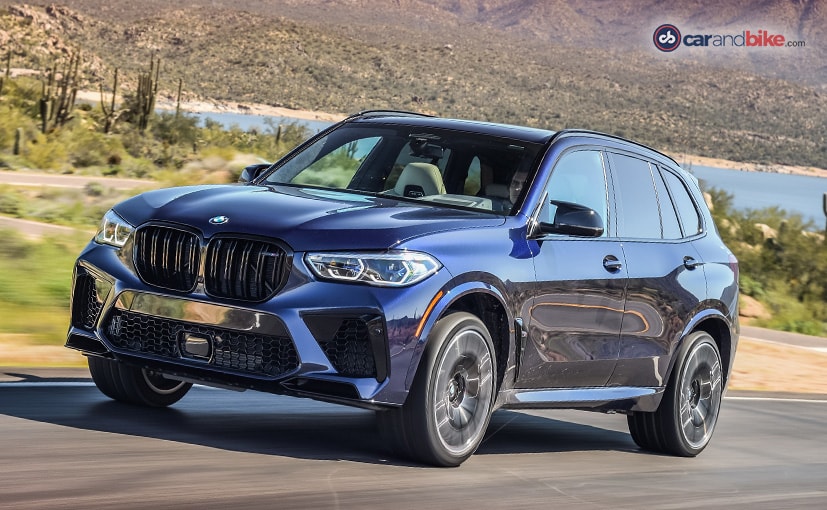 (The steering on the BMW X5 M is a delight and feels quite responsive. The SUV itself feels agile and nimble on its feet, for its size)

The car's steering is a delight - it will allow you to nip about with ease, and precision - while giving you the sporty stiffness you want from a car like this. You can customise everything from the throttle response, gear changes, steering feel, suspension and braking - since each of those has various degrees of sportiness or comfort that can be individually manipulated. In addition to that are the road, sport and track modes that you can control with the M mode button on the central console. You also have a setup button that lets you individualise it all. 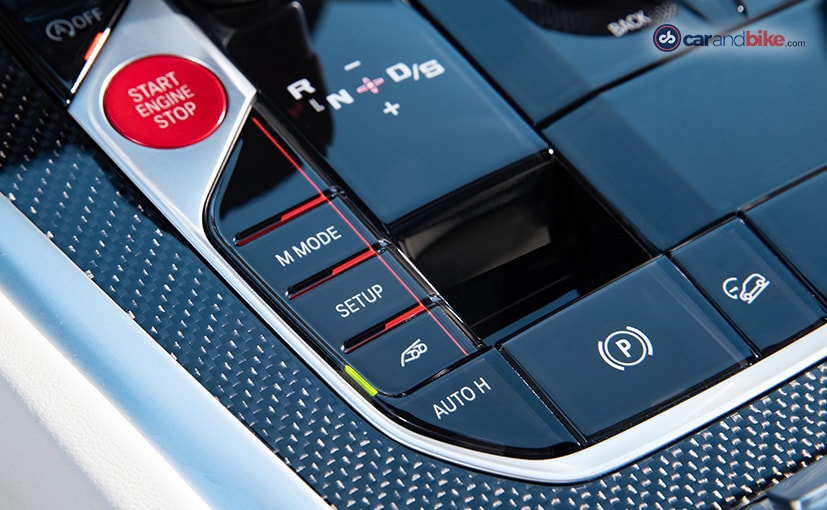 Besides this there are the customary M1 and M2 buttons on the steering wheel that let you save two customised shortcut settings that let you quickly flip into the desired mode, without going into the setup menu. In the event that you are in comfort, but want instant dynamic or sporty response, having a shortcut helps. Having said that - even in its most tame settings, the X5 M is a beast - it will leap ahead, the paddle shifters are very effective, and the car is an absolute pleasure to drive. It also does not feel heavy or held back by its heft or proportions whatsoever. The X5 M Competition does 0-100 kmph in 3.8 seconds flat. Its 3.9 seconds on the X5M. The car allows you to announce your arrival with the engine providing the exhaust a most delicious, sporty growl. 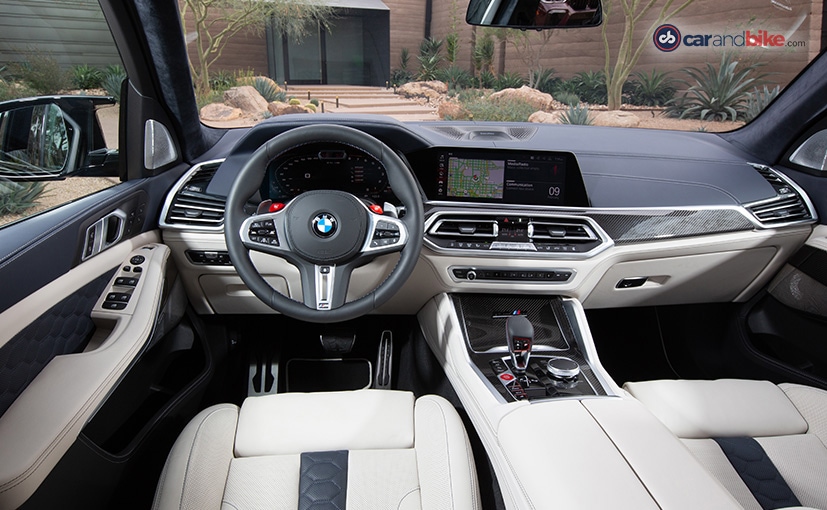 The car's cabin is impeccably finished, and it will offer you a sense of both sheer luxury and fine craftsmanship, as well as the sporty theme expected with a car like this. The quilted leather seats, optional colour and material palettes, and the latest tech including BMW's voice assistant and 7th generation iDrive touchscreen interface - are all standard of course. 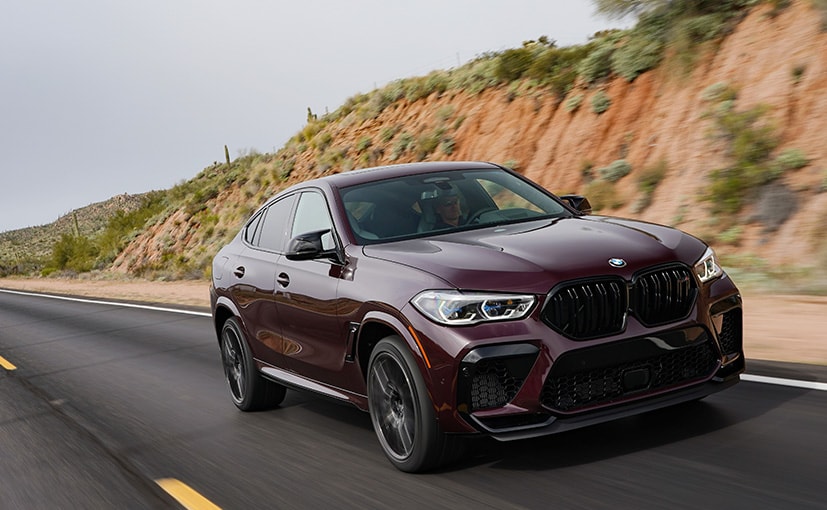 (The BMW X6 M that we were driving felt more like an everyday car over the X5 M. But maybe, that could be a result of driver settings. We don't see the BMW X6 M coming to India)

I also hopped into the X6 M Competition for a bit. The teams at BMW M will tell you two cars are identical - and in numbers they are - yet they say the X6 M will be the slightly sportier, stiffer of the two. Strangely I found the opposite to be true - the X6 M felt like its more tuned to the everyday driving needs, while the X5 M just felt stiffer - especially the steering. So, I will have to put that down to customising the various individual settings differently in both the cars - so as to be believe them! But like I said earlier, the X6 M is unlikely to come to us. The regular X6 will mind you - as the new 3rd generation car is also headed to India in 2020. But that will be a separate story. 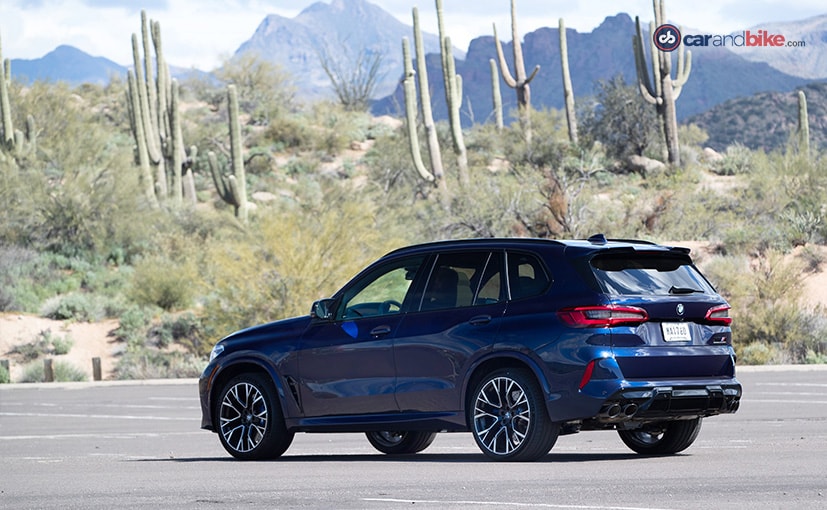 (We suspect that BMW will get only the X5 M Competition variant to India, which is the top-spec model in the X5 line-up)

So the X5 M will come in 2020 too, and I do think BMW India will opt for only the Competition variant. I expect a launch to happen just ahead of the festive season. The expected price range for this monster is ₹ 1.82 Cr - and so it is clearly not for everybody. But then you knew that even at the start of this story, didn't you?