Can a tyre still provide efficient braking at the end of its life cycle? We test this claim in a wet braking test on the new Michelin Energy XM2+ tyres. 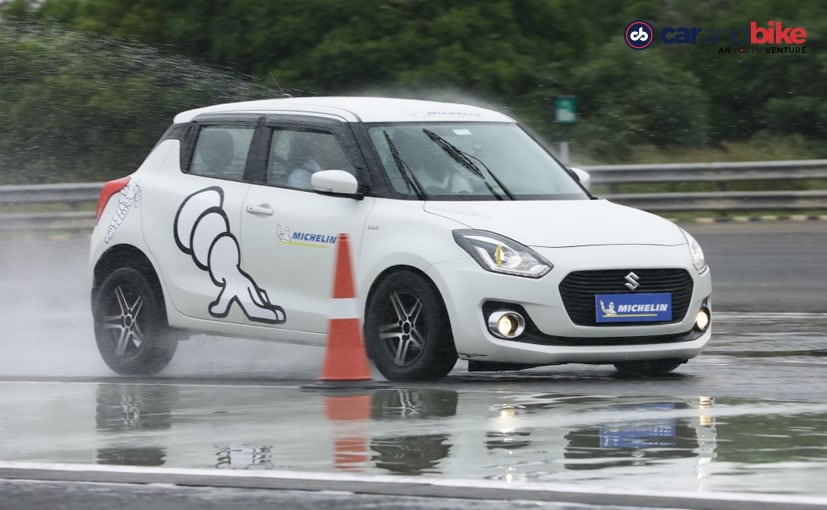 When buying a car, we pay all our attention to the design, performance, fuel efficiency, ride and handling, comfort. Even the cover on the antenna at times. But little attention is paid to the tyres. The four-inch rubber carries the weight of the car and connects the vehicle to the road. We can't stress enough then how much you need to ensure that the tyres are in the right shape and offer consistent performance through their lifecycle. So, when Michelin India invited us to Chennai to test tyres, it was just the perfect opportunity to see how capable they are. The new Michelin Energy XM2+ series promise to offer efficient braking in wet conditions even at the end its lifecycle and we had a chance to put this claim to test. 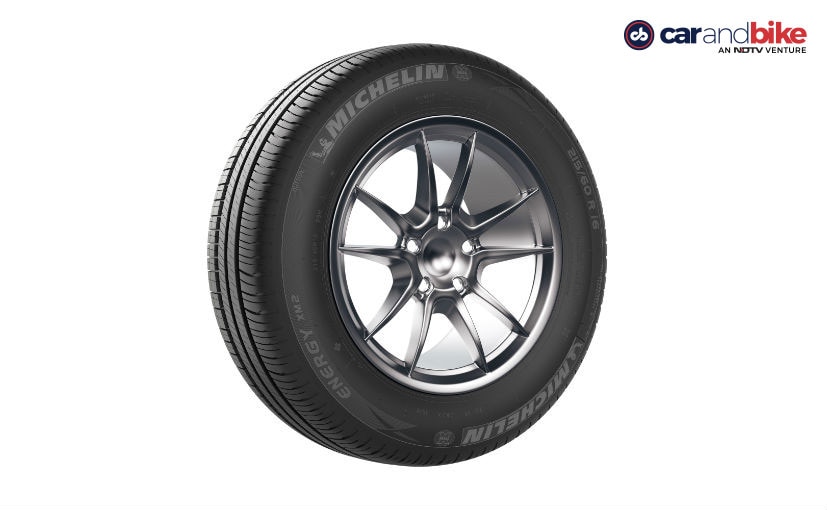 The new Michelin Energy XM2+ tyres are the new budget offerings from the French manufacturer and replace the XM2 series that were on sale for the last eight years. Michelin says that the tyres retain their performance when close to balding, and in fact offer better braking despite being at the tyre wear indicator. The tyres use full-silica rubber compound in its construction with a strong link of filler molecular bond, along with Alternate Bridge Technology that ensures lesser shuffling in tread block. All of this is intended to minimise wear and tear and reduce rolling resistance, thereby enhancing fuel efficiency on the vehicle. 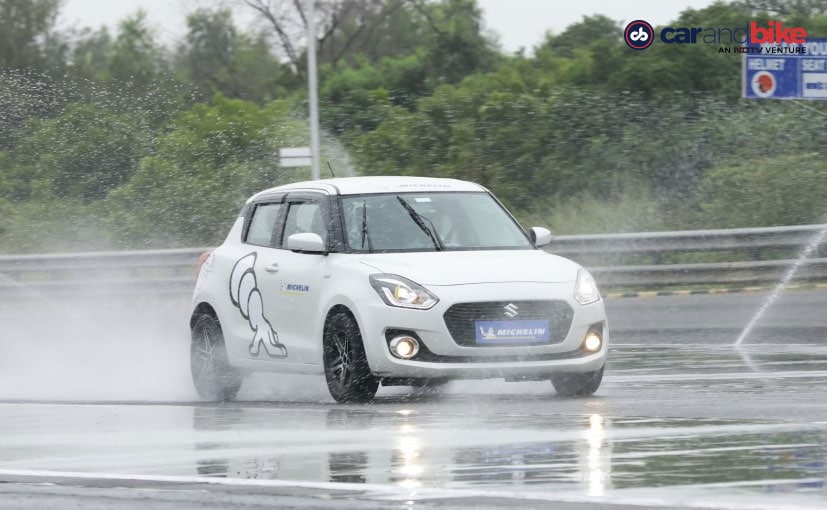 Braking at 100 kmph, the Energy XM2+ tyres remained stable under wet braking over the Bridgestone B290s

Our first test of the day was taking the Energy XM2+ tyres on a wet braking set-up. To prove its point, Michelin brought in two identical Maruti Suzuki Swift diesel cars with ABS and airbags. While one was the shod with the XM2+ tyres, the other were equipped with the Bridgestone B290s, the direct rival to the Michelin. To make things more interesting, both the tyres were worn down to the end of their lifecycle at 1.5 mm or the 'tyre wear indicator' in a laboratory. Automotive engineering, design and homologation services company Applus IDIADA India was conducting the tests to keep things non-biased. The task then, was to gauge which tyre provides better braking in wet conditions at the end of the lives.

Our first run was in the Michelin-equipped Maruti Suzuki Swift. Starting from a dry patch on the test track, we locked speed at 100 kmph in fourth gear in a straight-line entering the wet section. Arriving in the braking zone, we stomped on the brakes and held our breath as the car came to a halt. The ABS kicked in almost immediately and the Swift stopped within the stipulated distance. The major difference was the ease with which the tyres controlled the high-speed stop. The car remained stable at the front and rear, despite the wet surface and at no point did it feel like we would be moving sideways. A big relief! 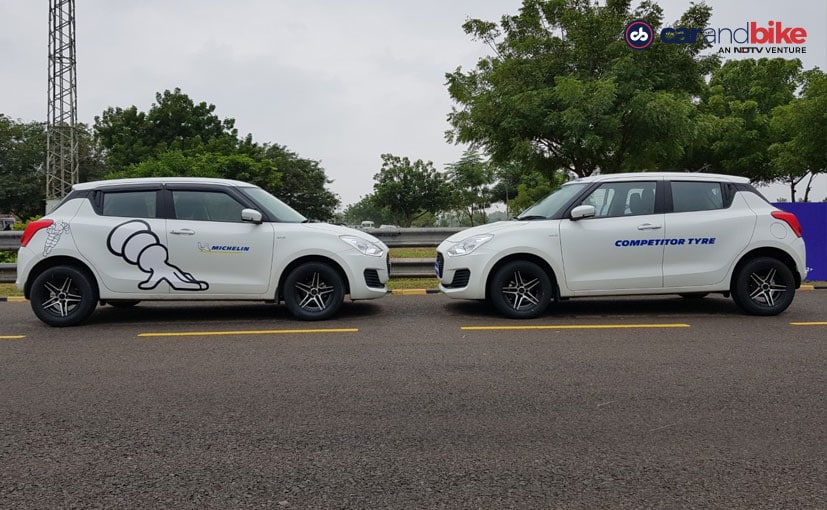 Both tyres were worn down to identical levels in a laboratory, equipped on identical Maruti Suzuki Swift diesels

Now, Michelin promises the XM2+ tyres reduce the braking distance by 3.3 metres over its competitors, at near-balding levels. It was now time to see if the Bridgestone tyres were any good. We did a similar run in the other Swift running the B290s at the end of their lives, braking at 100 kmph. As the ABS worked harder to not lock up the wheels, the unstable rear wheels were apparent on the competitor car. The stopping distance was way past the 40-metre mark that was the benchmark for both tyres brands. To ensure that we tested these tyres right, we had another go in both cars. The results were similar with the worn-out Michelins proving to be far more effective and consistently so, on the wet surface. The competitor tyres needed a lot of input to remain as we braked hard, only to stop way past the marked cone.

The Michelin tyres also come with side treads that are intended to push the water out of the tyre in order to avoid aquaplaning. The feature is not only thoughtful but a lifesaving one and helped maintain control under the simulated conditions at WABCO. 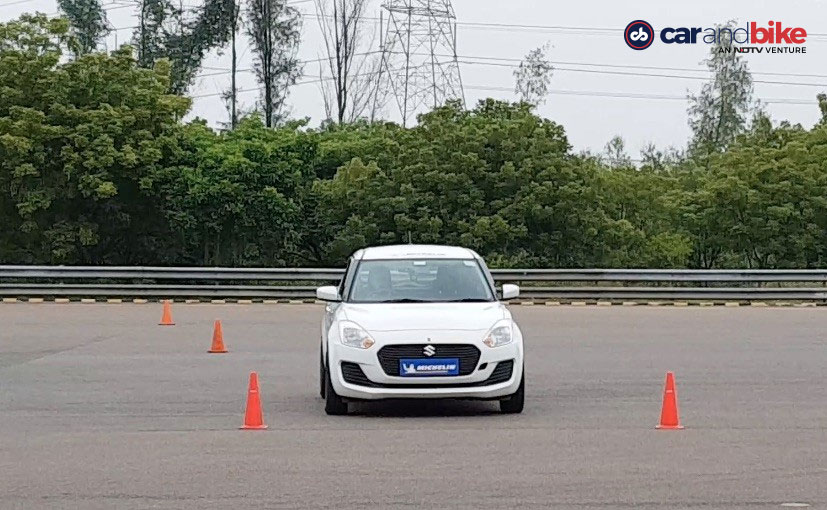 The all-new Energy XM2+ offer excellent traction at high speeds, while there is a noticeable reduction in tyre noise over the OEM wheels

Test 2 - Around the WABCO Grounds

Our second test was with only the Michelin Energy XM2+ units around the WABCO proving grounds. Unlike a racing circuit, the proving ground is a narrow track that does not allow you to be too aggressive on the pedal. With next to nothing for a run-off, we had a little chance of escaping a high-speed crash. The task then was to see how all-new Energy XM2+ tyres perform on dry tarmac. A couple of laps on the circuit and the grip levels felt better than the stock tyres on the Swift. These, of course, have a wider track at 185/70/R14s as compared to the stock Swift's 165/80/R14s. The more evident change was a dramatic reduction in tyre noise, and the Michelins managed inspire confidence even around the banking section at over 100 kmph, way past the recommended speed. The tyre offers excellent grip levels and gives you the assurance to carry more speeds with ease. It will be appreciated by drivers that do highway runs more often. The slalom section also helped us gauge the tyres under quick direction changes and the XM2+ turned out to be impressive with no squeals to complain about. 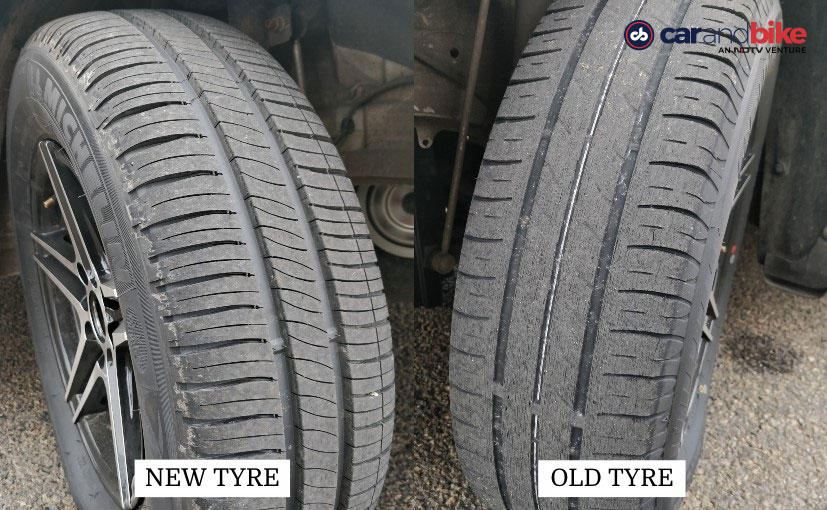 What About Tyre Life?

We can't harp on enough about how important tyres are on your vehicle. With the Energy XM2+, Michelin says the tyres can last up to 29 per cent more in terms of the total tyre life despite the softer rubber compound when compared to the competition. That translates to a lifespan of about 1.25 lakh kilometres, which is beyond the average life span of a car with a single owner. While older tyres were recommended to be changed at 50,000 km, the new tyre options have a longer residual life and can easily clock up to 100,000 km, and that's exactly what Michelin tried to prove with its series of tests. Fewer tyre replacements also go easy on the pocket and are good for the environment as well. 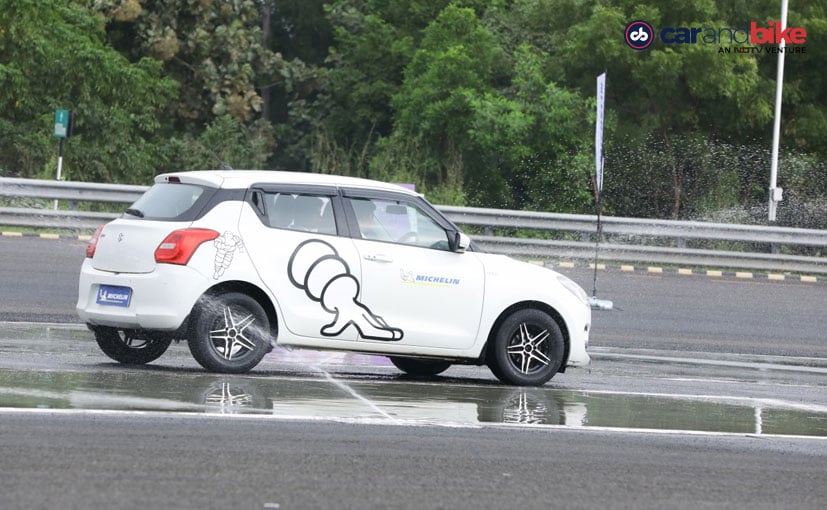 The Michelin Energy XM2 were always competent tyres from the brand the new XM2+ series builds on the same with better grip levels, longevity and efficiency. The XM2+ tyres are currently available in 14 and 15-inch sizes with prices starting from ₹ 4735, which is at a premium by about 10-15 per cent over rivals. The manufacturer plans to bring the XM2+ range from 12 to 16-inches in 30 variations this year, which makes it compatible with everything from the Maruti Suzuki Alto to the Kia Seltos. While the Michelin Energy XM2+ tyres proved their mettle on the track, using them on the open road will offer better clarity on long-term usability. Having said that, if you are in the market for a fresh set of rubber, do give XM2+ tyres a close look.