The Toyota Vellfire is a luxurious MPV and is the perfect vehicle for celebrities, movie stars and the likes. It is full-sized panel van and it is loaded with all sorts of creature comforts. We drove the new Vellfire at Toyota's plant in Karnataka and see what it is all about. 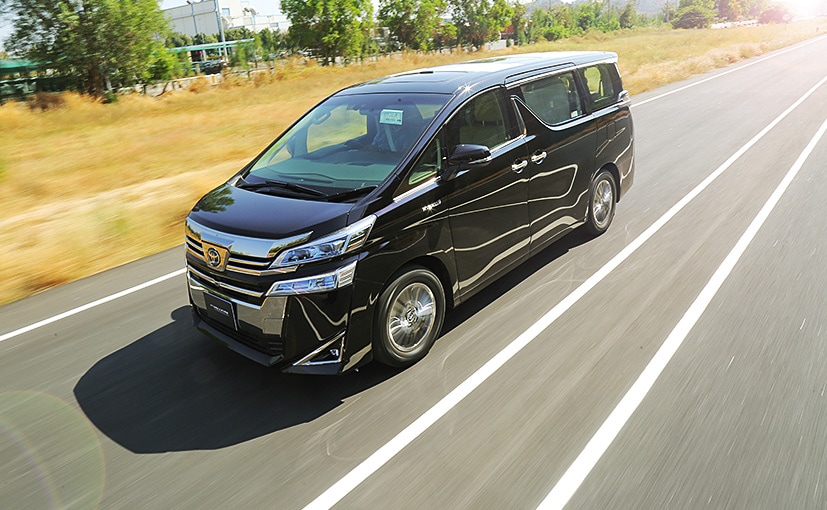 The Toyota Innova has been the long standing champion in the MPV space! For 15 years in fact! And now, with the launch of the Kia Carnival, Toyota did get a sense of things getting competitive as the Carnival feels slightly plusher! Which is why, Toyota decided to up its MPV game and go for the uber-premium Mercedes-Benz V-Class segment with the new Toyota Vellfire! But a quick disclaimer here! We experienced the Toyota Vellfire for a rather brief period of time and that too at Toyota's test track at its plant in Karnataka. So, these are just first impressions. Keep watching this space for a comprehensive review, which will be coming very soon! 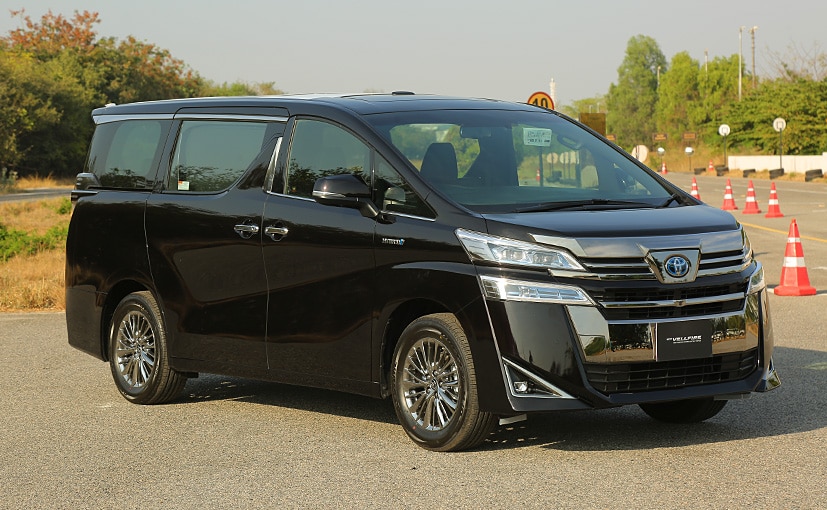 (The Toyota Vellfire is proper panel van. It has solid presence and definitely stands out of the crowd)

It is a boxy panel van, with little visual relief on the sides. The front end though is quite a thing! The face of the Vellfire makes you believe that this car used to be a transformer robot at some point in its life. It is big, bold and full of bling! The bling in question here is the unabashed use of chrome. The grille design by itself is quite nice but the amount of chrome may not be to everybody's liking. Or it just could, considering it give the car massive presence, be it a parking lot or on the road. 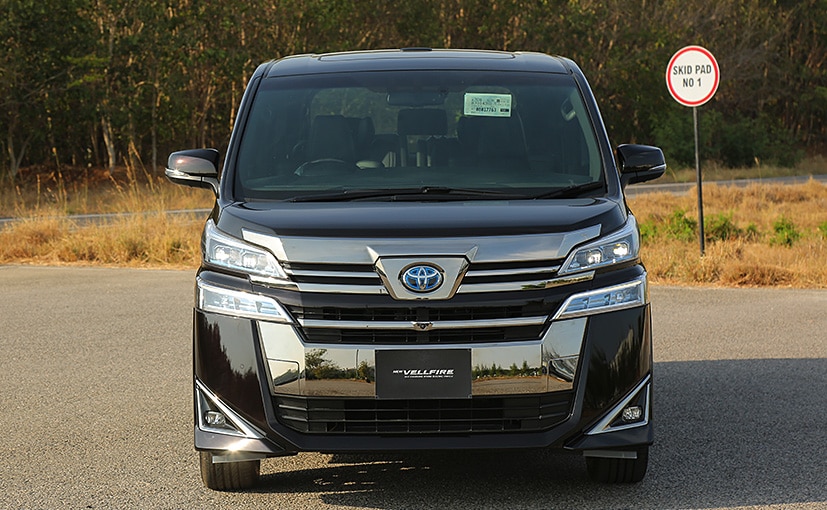 (The front end gets a bold design and there is lots of chrome, perhaps a bit too much for our liking)

There is a lot of symmetry and angles which give the car a cool, edgy look. The badges and the door handles are done in chrome too and the roofline gets a dash of chrome as well. At the rear, again, there is an ample amount of chrome in the form of a thick strip running across the length of the tail-gate, right above the triangular tail-lamps. Overall, the Vellfire may not be a thing of beauty but it definitely doesn't get lost in the crowd either. It stands out! 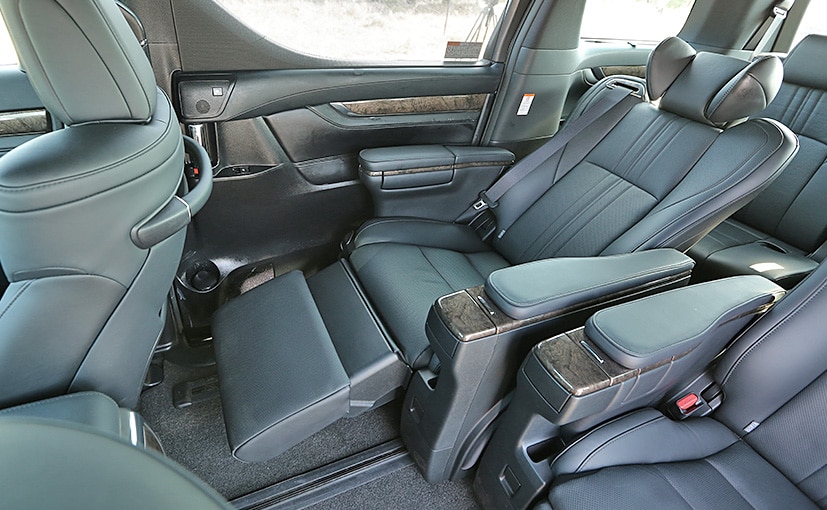 (The middle row seats are quite luxurious! The upholstery is done in plush leather)

Now, this is where things get really interesting. As you step inside the cabin through the rear sliding doors, you realise that the space inside is cavernous. It is a 6-seater, the Vellfire, but it is mainly for people who like to be driven around. The two captain seats, draped in sumptuous leather are perhaps the most comfortable seats I have sat in, in a long time. The upholstery is plush and there are gazillion configurations available for the seats, be it the backrest, the head bolsters or even the under thigh support. There are small trays popping out of the arm rests along with cup holders. If you want to really unwind, with a coffee and a snack, there is a screen for rear passengers as well, which can be coupled with smartphones and play your favourite movie. 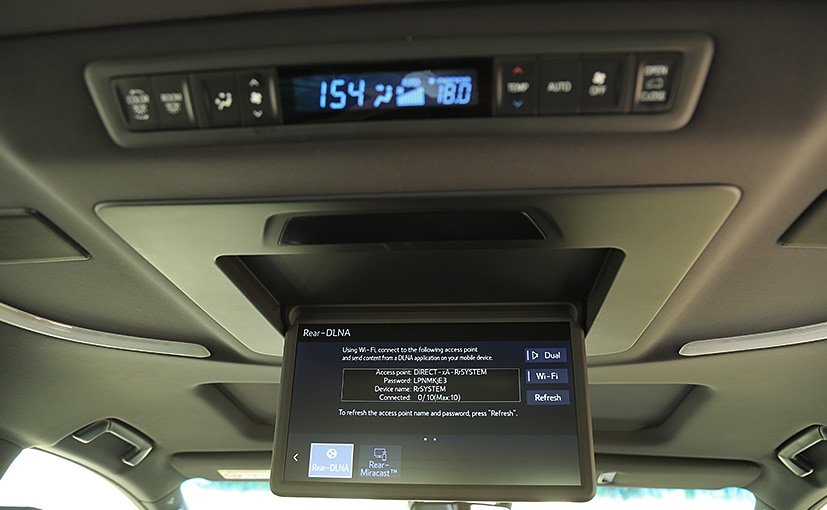 The middle row seats can be slid forward too, for those who would be occupying the last row and trust us, they won't be uncomfortable either. They get plush leather seats along with armrests, dedicated AC vents and blinds as well. Most importantly, the back rests can be reclined to a certain degree, offering maximum comfort. The Vellfire has been designed in such a way that all of its passengers will be comfortable including the driver and the co-passenger as well. The front seats are heated and cooled and the chauffer has the option to adjust the co-passenger seat, moving it forward, liberating maximum space for middle-row occupants. 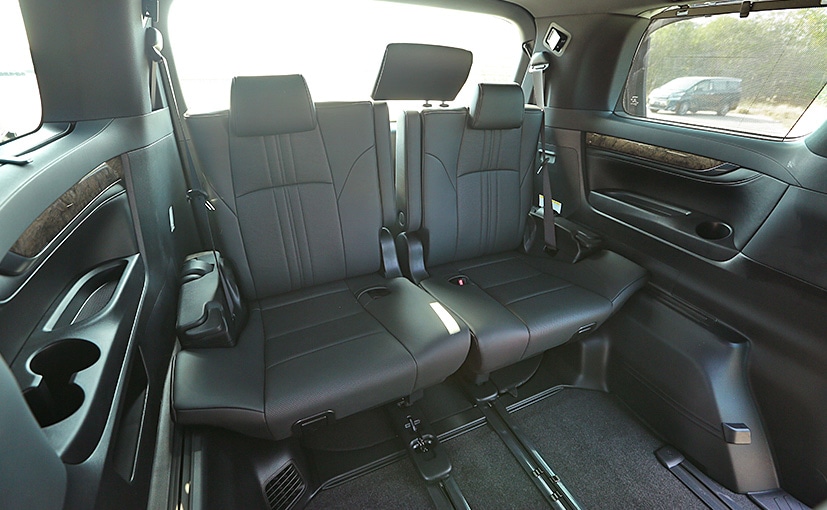 (The third row seats are perhaps one of the best in the business. Sitting in those doesn't feel like punishment)

Then there are features like ambient lighting, smartphone connectivity and a plethora of reading lights too. What we really missed are middle seats with a massage function and ventilation! I mean, why not offer the full package when it comes to comfort? The addition of these two features would have just catapulted the Vellfire to whole new level! 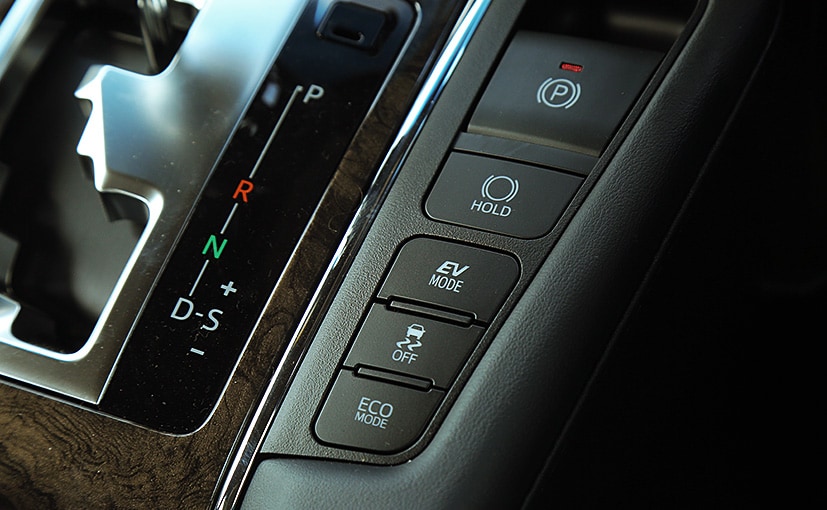 (At some places inside the cabin, the fit & finish is not up to the mark! It could have been better)

Now, coming to the few bits that we did not quite like! The fit and finish on certain areas inside the cabin feel is not up to the mark and feel plasticky. For example, the whole panel around the gear lever and the buttons accompanying it. Toyota could have done better to offer a more premium feel inside. The other eyesore is the touchscreen infotainment system on the dashboard, like on most Toyotas, this one too feels like an aftermarket fitment. 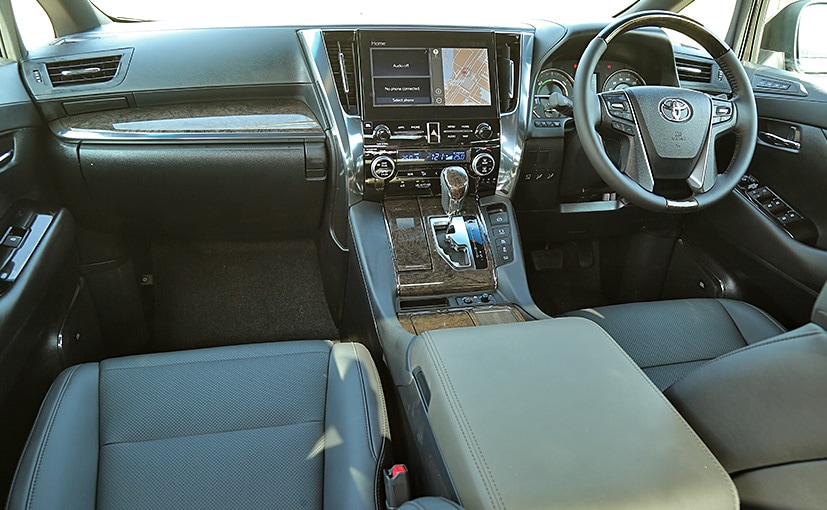 (The Toyota Vellfire gets a bucket load of features inside the cabin!)

Like we mentioned, the Vellfire gets a bucket load of features which include LED headlamps with cornering function, two sunroofs and a 17-speaker JBL system. As far as safety is concerned, the Vellfire gets 7 airbags along with ABS and EBD, panoramic view monitor and parking assist alert as well. (The Vellfire gets a 2.5-litre petrol engine along with two electric motors on each axle. The total power output is 198 bhp)

The Toyota Vellfire hybrid electric vehicle and it gets a 2.5-litre petrol engine which pumps out 115 bhp at 4,700 rpm and has a peak torque output of 198 Nm between 2,800 - 4,000 rpm. Those numbers sound underwhelming? By themselves yes! But the Vellfire also gets two electric motors at the front and rear, making 105 kW and 50 kW respectively, with the total power output rated at 196 bhp. Now, the front wheels are driven via an e-CVT gearbox but the Vellfire also gets electronic 4WD which helps the car stay stable when driving at high speeds. 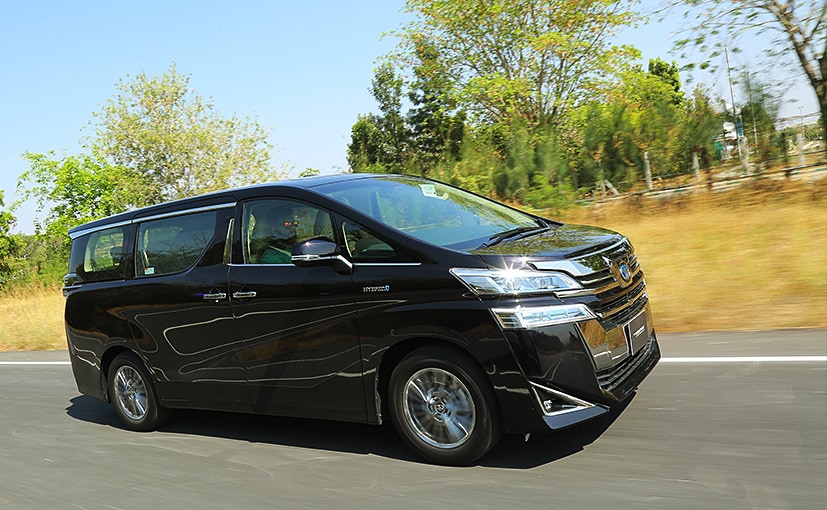 We had the Vellfire for a very brief window and that too at the company's test track in its plant at Bidadi, Karnataka. In accordance with the rules laid down by the company, we weren't supposed to exceed 60 kmph on the test track and had just a 45 minute window to drive the car. Our brief time driving the car revealed that the Vellfire does have the power to build up speeds quickly but a complete feel of the performance is something we hope to get soon. We will also reserve our comments on the ride quality and the handling of the van as our test schedule permitted us to drive the car only on the test track consisting of smooth tarmac and flowing turns. 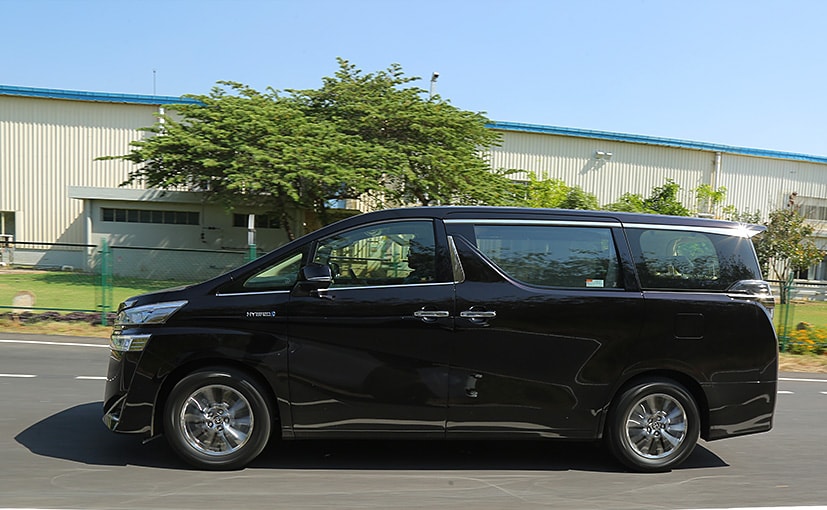 (The Toyota Vellfire is a big van, at nearly 5 metres in length. Plus it has cavernous space inside too)

The Toyota Vellfire is a massive vehicle, no doubt about that! At 4,935 mm, it is nearly 5 metres in length, is 1,850 mm wide and 1,895 mm tall. It has a wheelbase of 3,000 mm and weighs nearly three tonnes. But our limited experience, driving the Vellfire told us that the car does manage to hide its heft when building up speed initially and during turn-ins as well. 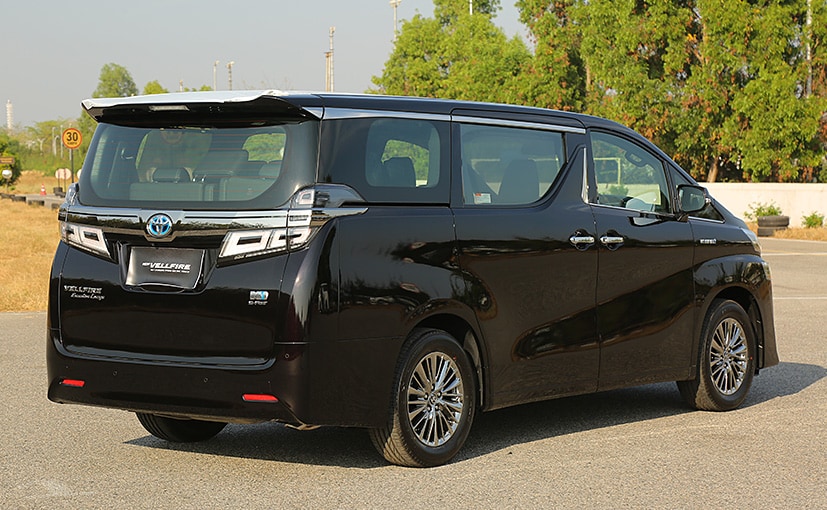 In case you were wondering about the rivals of the Toyota Vellfire, it isn't the Kia Carnival. The Vellfire will go up against the Mercedes-Benz V-Class and we expect it to be priced at around ₹ 85-90 lakh (ex-showroom). Toyota is billing the Vellfire not as a people mover but as a premium luxury car. The car has a lot to offer and is genuinely comfortable, especially for the rear passengers but it has its work cut out as it sits between the Kia Carnival at one end of the MPV spectrum and the Mercedes-Benz V-Class on the other. Both cars offer solid value-for-money and Toyota Kirloskar Motor really needs to price it well in order get its hand on a substantial slice of the MPV pie in the Indian car market.