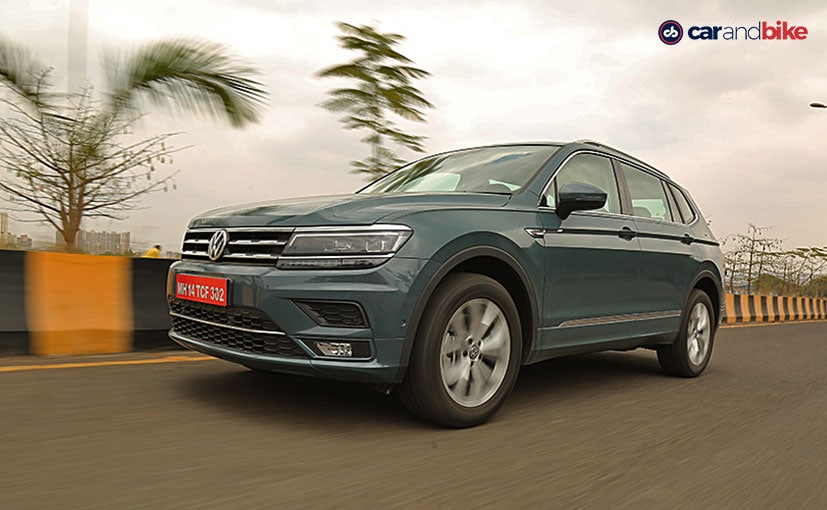 We exclusively brought you news of Volkswagen bringing a host of SUVs to India right from the T-Roc to the Taigun and we even told you about the one we've finally got our hands on and the one which we told you would replace the 5-seater Tiguan - yes, we've driven the Tiguan AllSpace. The name Tiguan is familiar to most of us but this one, the Allspace, clearly tells you there's more 'space' on offer. It's a seven-seater and bigger than the 5-seater Tiguan. To be precise, it's 335 mm longer, 2 mm taller while the distance between the wheels is 110 mm more than the 5-seater version. The width however, is the same. 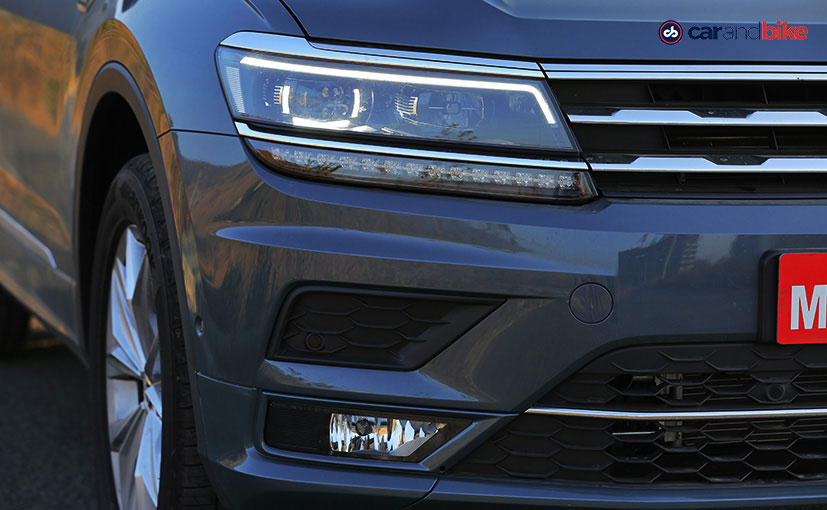 The Volkswagen Tiguan AllSpace gets LED headlamps and LED DRLs

As far as looks go, it isn't flambouyant but the new LED DRLs and the LED headlamps do attract some attention. The clamshell design of the bonnet doesn't add much to the drama but there's enough chrome on the car to suggest how premium it is. There's chrome on the grille, the fog lamps, there's even a line below the grille and of course it spreads to the sides, and the rear. the roofrails too add to the lifestyle element of the car. 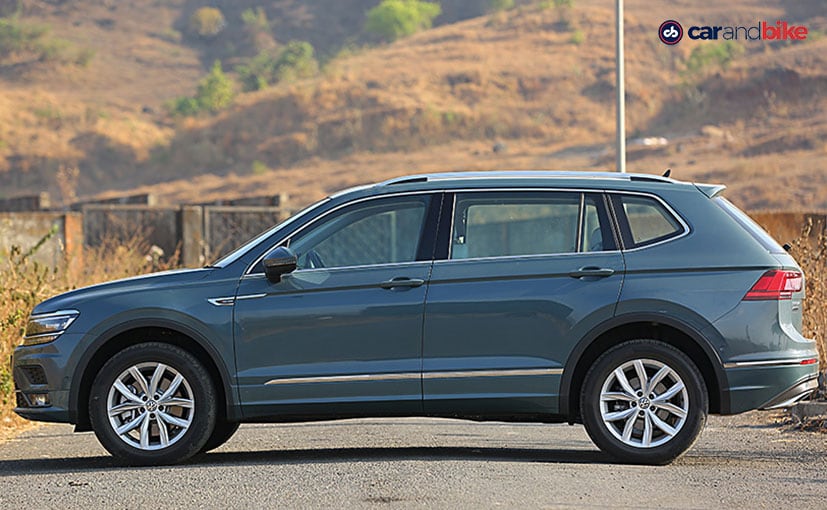 The wheelbase of the Tiguan Allspace stands at  2787 mm which is 110 mm more than the Tiguan 5 seater.

Volkswagen brings the Tiguan Allspace to India as a completely built unit and there's just one variant on offer, so it is filled to the brim with features. There's a panoramic sunroof, full-digital instrument cluster with active info display so you know everything about the car, three-zone automatic climate control, hands-free boot opening, beige leather seats, keyless entry, a touchscreen infotainment system and eight speakers. 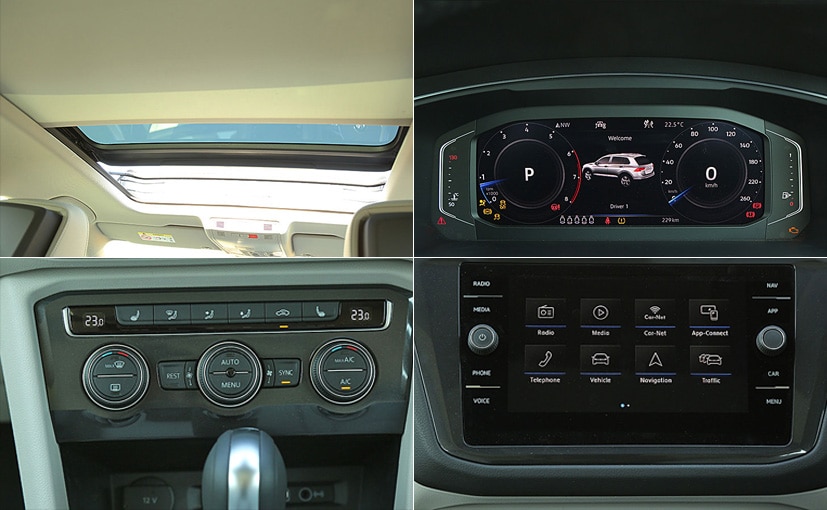 There's Apple carplay android auto and the even mirrorlink. But it could have done with a wireless charging unit, considering it's the trend now. Then there's this sporty looking flat-bottomed steering wheel and of course there are paddle shifters. The dashboard comes with soft touch material and the two-tone cabin beige and grey adds to the opulence. The driver seat can be adjusted electronically and it offers good lumbar support as well. There are two more rows behind, as you know so let's get to it. 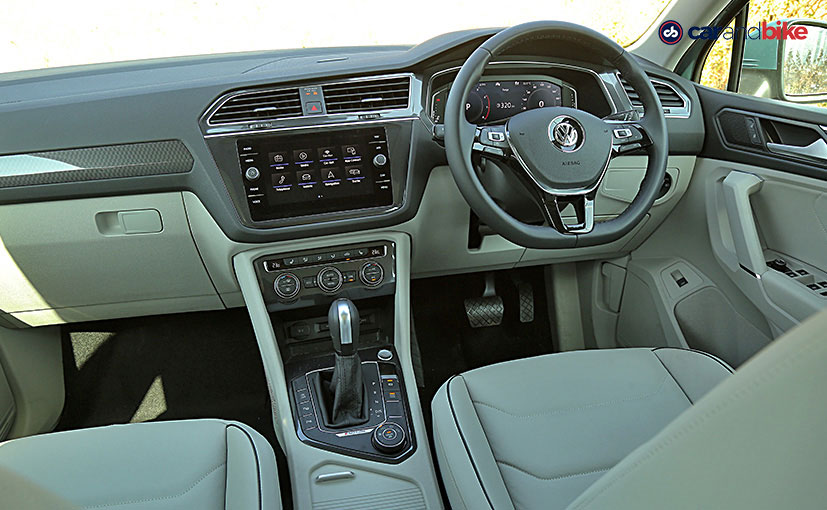 There's good enough space at the rear especially in terms of leg, head and shoulder room but the rear passengers get some convenience features too. You get a centre armrest and even these folding tables on the back of the front seat. You can place your laptop on it and have your own workstation back here and there's a cupholder too. Then there are the AC temperature controls at the rear and a charging point too. The seats offer good underthigh support and that's really good for long journeys and you will have quite a few of them in this car I am sure. This row has a 60:40 split and you can slide the seats to create some room for the passengers in the third row. 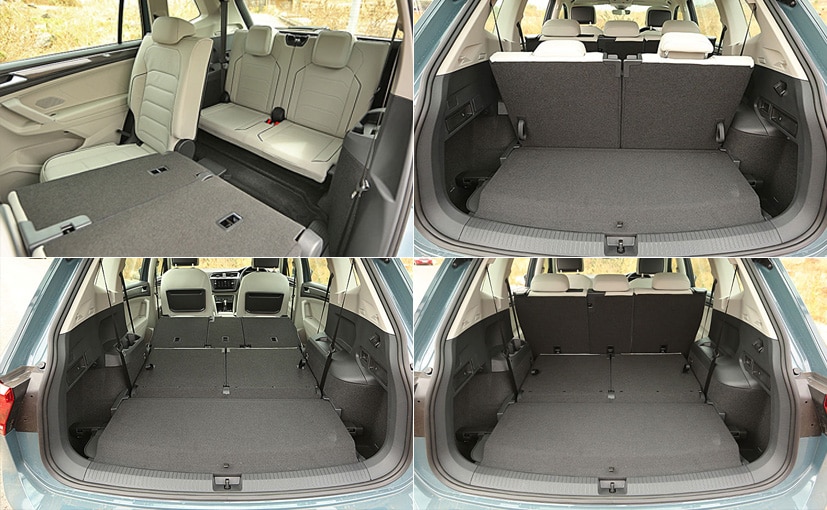 There's 340 litres of bootspace with all the rows up, 1274 litres with the two rows folded down

The third row - that's one place I was dreading to go. An attempt to get into the third row took every ounce of skill and well I fit in, well almost. Even if I slide the second row seat a bit, I am not at all comfortable here. It is meant for kids then and not for anyone above 5 feet 4 inches for sure.

Trying to get out of the third row proved to be even more challenging, but with all the seats of the 3 rows up, the Tiguan Allspace still provides 340 litres of bootspace and that's impressive. There's even enough room for the spare tyre. 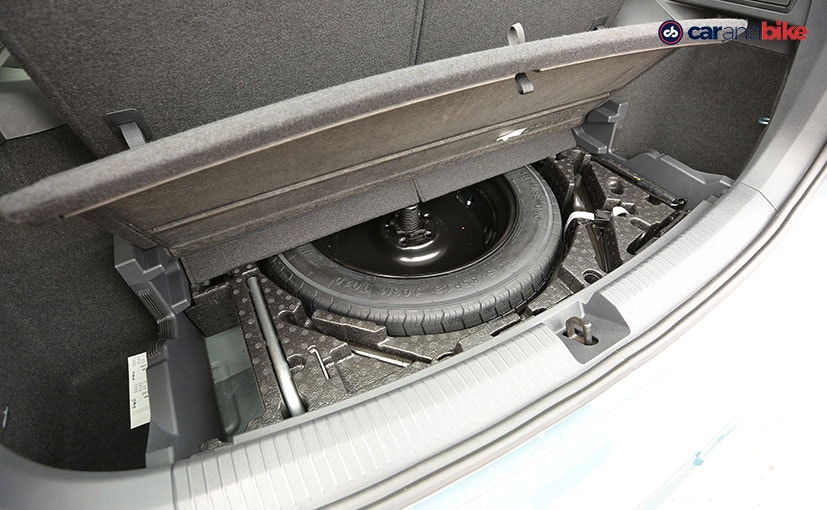 With the 3rd row down there's 1065 litres on offer and with the second and third row down it's a cavernous 1274 litres. You could probably fit more than half of India's cricket team in there!

If you do manage to kidnap half of the Indian cricket team, you would need this one to go fast and the petrol only model does not disappoint. VW's petrol only strategy starts with the Allspace. This one gets a 2-litre TSI petrol motor which punches out 188 bhp and 320 Nm. It's refined and in fact quick off the mark too. That 7-speed DSG gearbox really helps in delivering the power at the right time. It's seamless and precise. In fact if you want to take matters in your own hand, then there are paddle shifters too which respond quickly to your inputs. 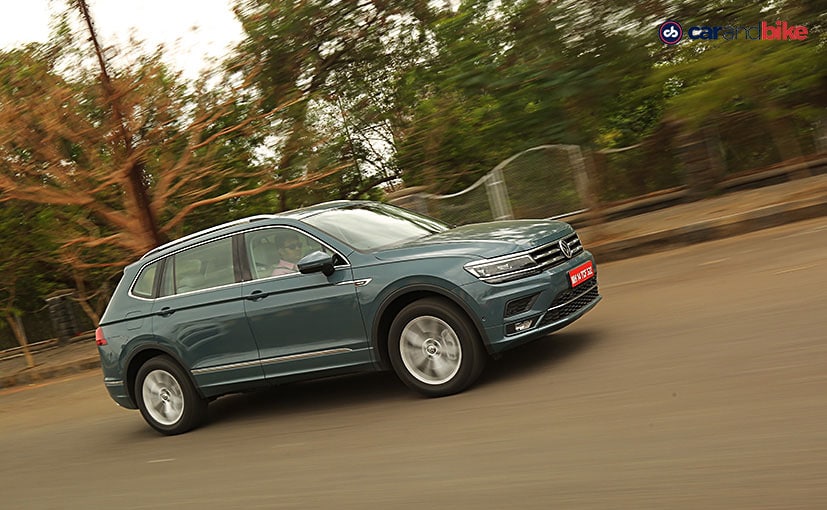 There are various modes you can shift to, Eco, Sport and Individual, so the obvious choice here was to opt for the Sport mode. All of a sudden the responses of the engine and gearbox quicken and the exhaust too makes a bit of noise. It just comes alive and it's only after 4200 rpm that there is a visible drop in power and the engine has no more to give. But I have to say this, it does not feel like an SUV when you drive, it's more hot hatch territory. 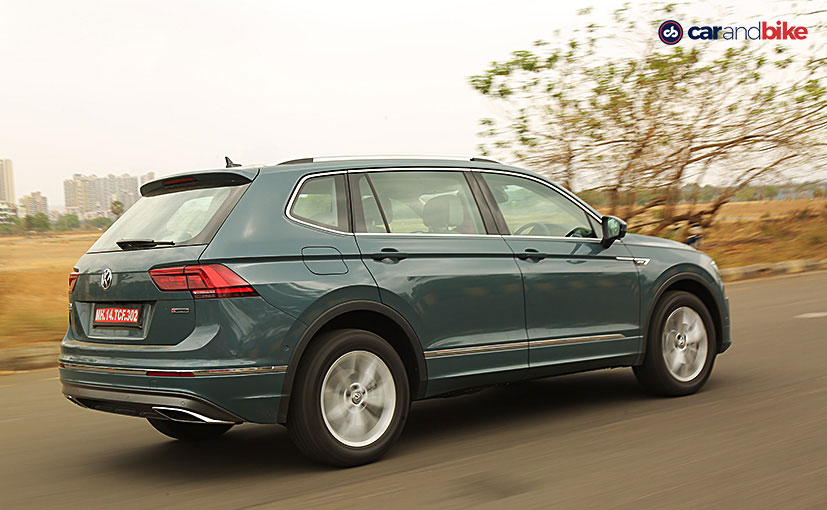 And you have to give credit to the 4Motion all-wheel drive system, which we have seen on the Tiguan already. The gearbox feeds power to all four wheels and that's how it's quick off the mark too adding to the experience of it all.

For those wondering what the ride and handling is like, well it creases out everything that the road throws at it, be it potholes or broken road surface. The deep ones do rattle it but there's no lateral body movement and the passengers won't feel thrown around. The suspension setup is on the stiffer side and that helps with the undulations on the road, it's steady and has little upward or downward movement. Then there are the modes on offer, snow and off-road which basically can tackle any terrain you throw at it. In fact, I can say this, that it drives better than the Kodiaq which its closest rival. 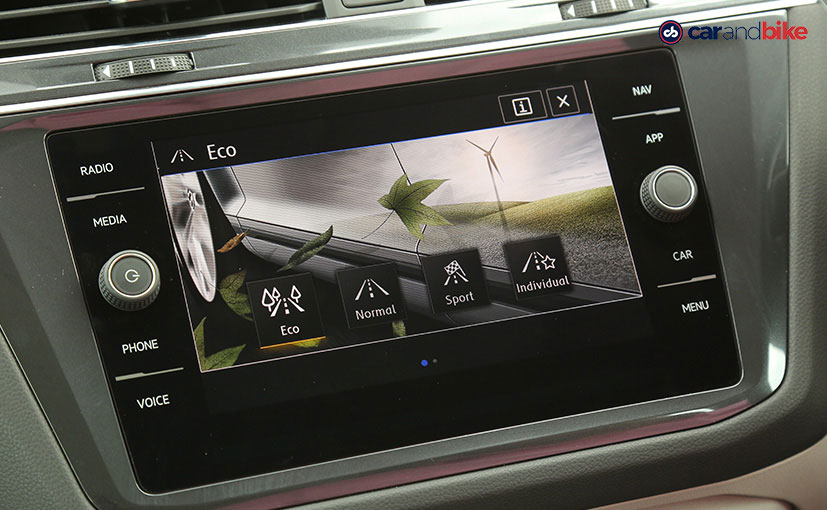 There are different driving modes available on the Tiguan AllSpace

It has a lot going its way then, it's got the features, the engine's powerful enough and you feel like you're driving a hot hatch when you're behind the wheel. But it is pricey. At ₹ 33.12 lakh (ex-showroom India), the AllSpace is ₹ 1.50 lakh more expensive than the top-of-the line Tiguan. It is however, more than ₹ 3 lakh cheaper than the Kodiaq L&K variant but then again, both the models are diesel. 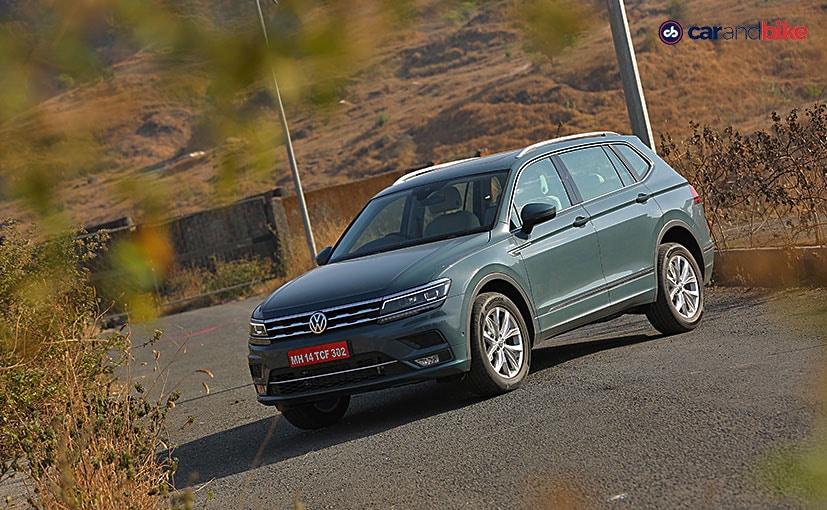 If you compare the AllSpace to SUVs like the Ford Endeavour than it is ₹ 13000 cheaper than its 4x4 variant but costs ₹ 3 lakh more than the Mahindra Alturas G4.

The introductory price is competitive considering it comes as a completely built unit to India and also because all its rivals have just the diesel offering. There's a fair bit of interest in the car already as Volkswagen has received more than 200 bookings for it. So, while it may not become a top-seller for the company, it will strengthen its SUV portfolio. The Allspace ticks all the boxes then and it is a car you'll enjoy driving everytime you get into it!