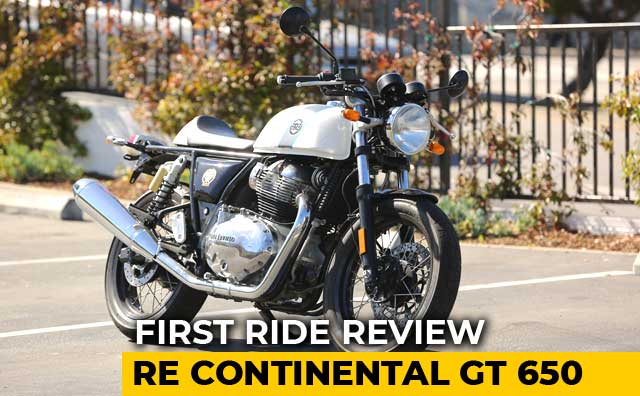 The Royal Enfield Interceptor 650 and Continental GT 650 borrow heavily from the original motorcycles of 1960-70s. The bikes are retro in design, underpinned by an all-new frame developed by RE subsidiary Harris Performance in the UK. The chassis has been optimised to offer excellent handling without compromising on comfort. Both the Interceptor 650 and the Continental GT 650 measure 1024 mm in height, and have a ground clearance of 174 mm. The Royal Enfield Continental GT 650 will have a fuel tank capacity of 12.5 litres, while the Interceptor 650's fuel tank will be slightly larger at 13.7 litres. The twin pea-shooter exhausts finished in chrome add the retro touch on the motorcycles.

The Royal Enfield 650 Twins are based on the brand new 649 cc, air and oil cooled, parallel-twin engine that belts out 47 bhp at 7250 rpm and 52 Nm of peak torque at 5250 rpm. About 80 per cent of the torque is available from 2500 rpm and a flat torque curve results in ample power all thee way till about 6000 rpm. Sending power to the rear wheels is a 6-speed gearbox that comes with a slipper clutch, for a lighter lever operation. The bikes are capable of speeds in excess of 160 kmph.

An integral part of the RE-verse in today's times, both new offerings will come with a host of additional gear on offer. This includes apparel, accessories, merchandise, motorcycle safety gear and more. Royal Enfield will not only sell you the motorcycle but a lifestyle around it that you can flaunt in more ways than you think.