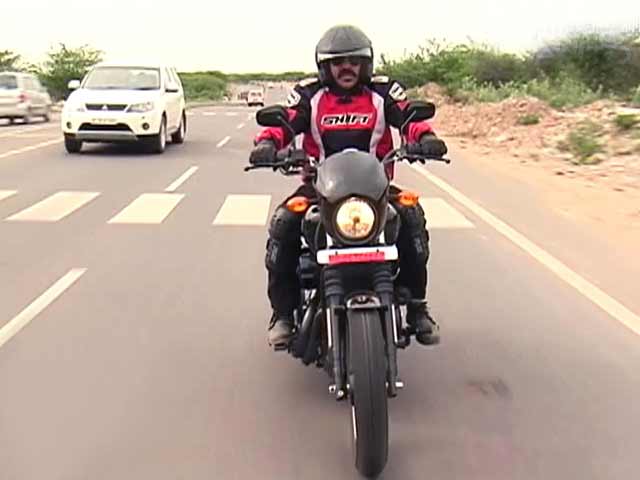 Harley Davidson, the Street 750 cruiser was launched in India at the 2014 Auto Expo. Having been around for quite a while, the iconic two-wheeler manufacturer came up with the premium cruiser that is available at an affordable price. Moreover, the company has worked upon the loop holes making Street 750 a viable choice in the premium cruiser segment. The 2225mm long bike gets a fairly large seat placed at a height of 710mm (unladen). The ground clearance and wheelbase stand at 145mm and 1535mm respectively. Power comes in from a high displacing engine with a capacity of 749cc

Harley Davidson Touted as the most affordable bike; hence the price has not lowered the game for this cruiser. Up front it gets a rounded head lamp and wide handle bars. The visually appealing dual tone colour theme is overpowered by black and a contrast colour. The large seat is placed a tad low which offers comfortable riding position, moreover the pillion seat is positioned slightly upwards and the grab rail is missing, hence there is no support for the pillion at the back. The design on the whole is leaner yet muscular and the tear drop fuel tank looks neat. Centre placed instrument cluster features speedometer and other switches but it appears sub-standard unlike other Harleys. Rear gets LED tail lamps along with indicators.

Power is derived from the 749cc, liquid cooled, Revolution X V-Twin engine capable of developing max power of 47bhp and top torque of 59Nm at 4000rpm. A six-speed transmission is coupled to the engine which directs torque to rear wheel via a belt drive. Fuel economy isn’t imposing; the Street 750 pulls off around 17 kms in a litre.

Braking force isn’t as robust as it should have been which leads to low traction at high speeds. Although, the cruiser does well around the corners and handles well along the wide turns.

The cruiser rides on MRF tyres offered specifically for the domestic market. In front 100/60 R17 and at back 140/75 R15 tyres are employed. The tyres offer good amount of grip on road but lack friction at high speeds.

In the premium cruiser segment, Harley Davidson Street 750 takes on the likes of rivals such as Kawasaki ER-6N and Triumph Bonneville.

Harley-Davidson Street 750 Price in Other Cities

Harley-Davidson Bike Dealers in Other Cities