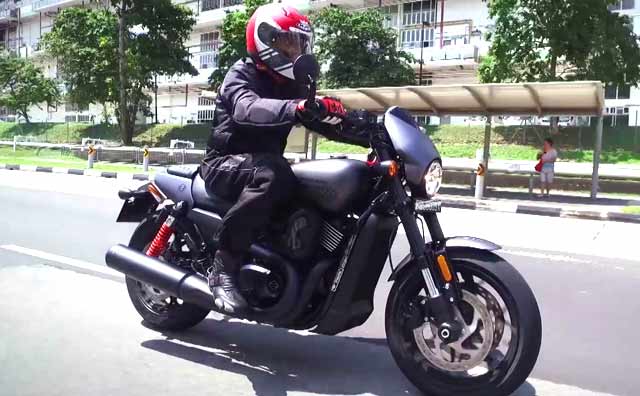 Harley-Davidson has introduced the 2017 Street Rod in the country priced at Rs 5.86 lakh (ex-showroom, Delhi). Based on the Street 750, which is Harley India's most popular offering, the Street Rod offers a modern, aesthetic looking motorcycle coupled with a more powerful engine. The hardware on the Street Rod has also seen a massive improvement over the standard Street 750.

The HD Street 750 is targeted at a young and urban demographic and the new Harley-Davidson Street Rod will be adhering to a similar customer base. The new cruiser looks sportier with the flat, drag-style handlebar which makes for an aggressive riding position and new foldable bar-end rear-view mirrors. The overall design takes inspiration from Harley's older XR1200X, while the blacked-out theme gives it a menacing appeal. Compared to the Street 750, the Street Rod also gets a new seat shape to hold the rider firmly, while the seat height has been raised to 765 mm for a better view.

The 2017 Harley Street Rod also gets forged brake and gear levers, aluminium rear set footpegs and an aggressive lean angle up from 28.5-degress left and right, to 37.3-degrees right and 40.2-degrees left. With respect to power, the new Street Rod 750 uses the 749 cc liquid-cooled, single OHC, 8 valve, 60-degree V-Twin High Output Revolution X engine that produces 11 per cent more horsepower and 5 per cent more torque than the Street 750. Harley says that peak power arrives at 8250 rpm while peak torque of 62 Nm is available at 4000 rpm. The motor is said to offer a strong mid-range with the surge available between 4000 and 5000 rpm. While the bore and stroke are similar to the Street 750, the new Street Rod is 5 kg heavier.

Harley-Davidson Bike Dealers in Other Cities