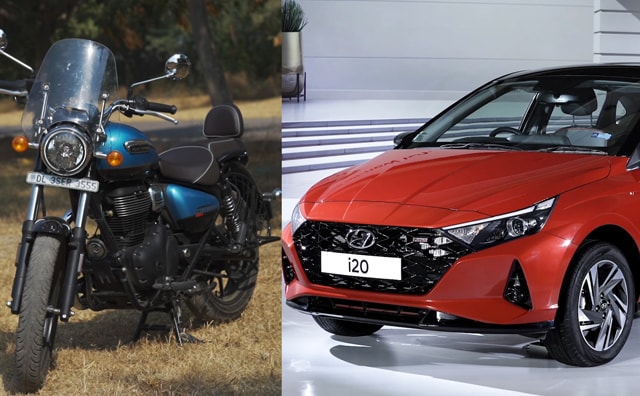 Royal Enfield has finally introduced the all-new Meteor 350 cruiser motorcycle in India. The new Royal Enfield Meteor 350 replaces the Thunderbird 350 globally and is underpinned by a new twin cradle frame, powered by a newly-developed engine and packs new connected features as well. The Meteor 350 traces its origins to the Royal Enfield Super Meteor 700 that was built during the 1950s until the early 1960s in the UK. The new offering shares little with the original barring the name. The new Meteor 350 has been launched in three variants - Fireball, Stellar and Supernova - priced at Rs. 1.78 lakh, Rs. 1.84 lakh and Rs. 1.93 lakh respectively (all prices, ex-showroom Chennai). In terms of competition, the Meteor 350 will compete with the likes of the Honda H'Ness CB 350, the Jawa, Jawa Forty-Two and the Benelli Imperiale 400.

The new Royal Enfield Meteor 350 is underpinned by a newly-developed twin cradle frame and draws power from the all-new 349 cc, single-cylinder, four-stroke, SOHC engine that develops 20.2 bhp at 6,100 rpm and 27 Nm of peak torque at 4,000 rpm. The new motor replaces the traditional pushrod design on the older Royal Enfield engine with a primary balancer shaft with an overhead camshaft, allowing for higher revs and more refinement. The engine is paired with a new 5-speed gearbox that offers more seamless gearshifts compared to the older models. The bike has a kerb weight of 191 kg, which makes it about 6 kg lighter than the Thunderbird 350. It also gets a longer wheelbase than the Thunderbird 350 allowing for improved straight-line stability.

Suspension duties on the new Royal Enfield Meteor 350 is carried out by 41 mm telescopic front forks with 130 mm of travel, and twin-tube shock absorbers with 6-step preload adjustability at the rear. Braking performance comes from a 300 mm front disc with twin-piston floating calipers and a 270 mm disc on the rear wheel with a single-piston caliper. The bike gets dual-channel ABS as standard. The Meteor 350 rides on alloy wheels with a 19-inch unit at the front and a 17-inch wheel at the rear, both of which are wrapped in tubeless tyres.

The Royal Enfield Meteor 350 will be sold in global markets from Australia to North America, with the model produced at RE’s Chennai-based facility. The bike has been developed by the brand’s global team with inputs from the UK Technical Centre along with Royal Enfield’s India R&D Centre. The cruiser will also come with a host of personalisation options right from the factory with the new ‘Make It Your Own’ mobile app allowing customers to add the accessories and colours, according to their liking, at the time of booking the motorcycle.

The Royal Enfield Meteor 350 Fireball will be offered in two colours, while the Stellar version will get three colour options on offer. The top-spec Supernova gets two colour options to choose from. Bookings for the Meteor 350 are currently open online and at dealerships.