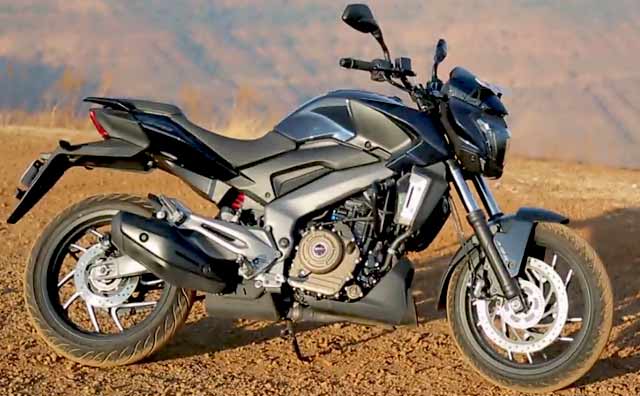 Bajaj Auto has introduced the Dominar 2018 collection with the launch of new 3 colours namely Rock Matte Black, Canyon Red and Glacier Blue. The new collection also comes with Gold Dust alloy wheels which give the bike a more upmarket look.

The new Bajaj Dominar 400 is very affordable as compared to the rivals in this space. It was first revealed as the CS400 concept back in 2014 at the 12th Auto Expo. Having undergone several name changes, the company finally sealed the Dominar moniker for the cruiser-sport motorcycle that defines the power and strength of the prowess. Touted to be the next flag bearer from Bajaj, it gets various features, missing in other models in the line-up. Power on the new Dominar 400 comes from the 373.3cc, single cylinder engine that complies with the BSIV emission norms that will come into effect from April 2017.

The Bajaj Dominar 400 is powered by a BSIV compliant, 373.3cc, single cylinder engine with Triple Spark technology, fuel injection, liquid cooling and 4-valve head. This is the same engine that does duty on the KTM Duke 390, but it has been tuned to churn out 34.5bhp of power at 8000rpm and 35 Nm of torque at 6500rpm. The 0 to 100 kmph mark is achieved within 8.23 seconds and the top-speed attained it 148 kmph. Bajaj Dominar 400's engine is paired to the six-speed gearbox. Here is a quick look at the specs:

The design and styling of the 2018 Dominar 400 is largely similar to the CS400 concept with some key additions made to the bike. It has a sculpted body and an aggressive stance that gives it a muscular look. Equipped with the LED headlamp in front, it is the first model from Bajaj to get that. The muscular fuel tank, broad handlebars and well-designed engine cowl completes the brawny look. One of the other firsts on the bike includes the all-digital LCD instrument cluster that provides all the necessary information required by the rider.

The cruiser gets a host of features including some of the tech that has been introduced in a Bajaj model for the first time. The list of features includes LED headlamps, digital LCD-instrument cluster with tachometer, odometer, speedometer, fuel gauge, clock and ABS indicator. Other than the aforementioned equipment, it also gets automatic headlamp on, dual channel ABS, telescopic front forks, monoshock absorbers at rear and dual disc brakes.

Equipped with advanced technology and a BSIV compliant powertrain with Triple Spark technology, the bike will take on the likes of Mahindra Mojo, Royal Enfield Classic 350 and Honda CBR250R in the premium motorcycle space.