The 2019 Bajaj Dominar 400 gets updated, with cosmetic changes and more power. We spend some time with it to see what exactly has changed. 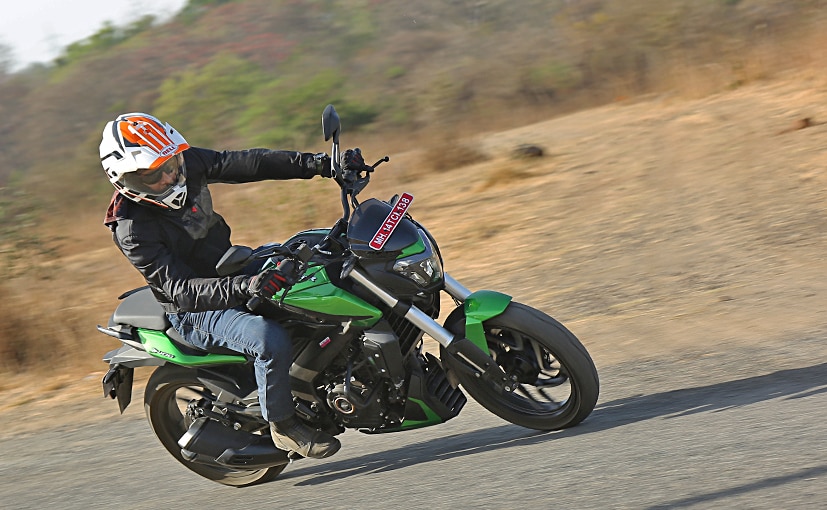 The Bajaj Dominar 400 has been around for a little over two years now. The flagship motorcycle from Bajaj Auto, the Dominar 400 was launched in late 2016 as a 'do-it-all' power cruiser, with butch and burly looks, and the performance and handling to tackle both commuting and touring duties. In these two years, the Bajaj Dominar has gone on to have its own fan following in India, although it didn't become as much of a commercial success as Bajaj had hoped it would. 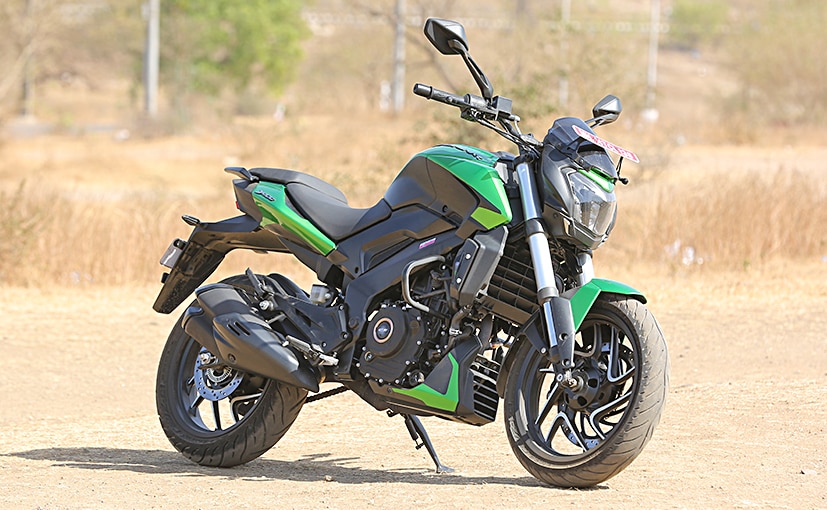 The 2019 Bajaj Dominar gets upside down front forks, a 5 bhp bump in power, and minor cosmetic updates

At the time of launch, senior Bajaj officials were optimistic that the Dominar will bring in sales numbers of around 10,000-12,000 bikes every month. Now, the 250-400 cc motorcycle segment alone accounts for sales of around 90,000-100,000 bikes every month, and getting a significant slice of that pie is good business, isn't it? Two years later, on an average, only around 3,000 Dominars are despatched every month, with half of those numbers coming in from international markets. 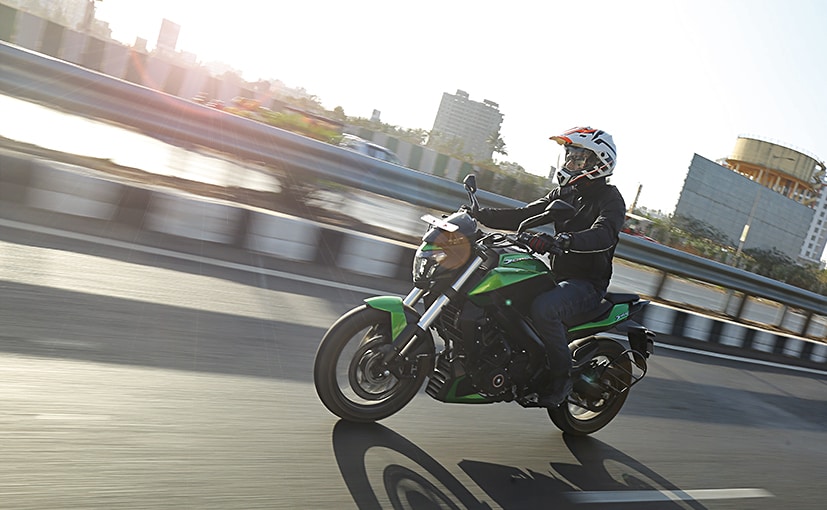 And feedback from the Dominar's international customers is what led to the development of the updated 2019 Bajaj Dominar 400. So, now it gets some minor cosmetic updates, new front suspension, updated instrument console, and some tweaks in the engine as well, resulting in an almost 5 bhp increase in power. The feedback apparently was that the outgoing Dominar 400 lacked the punch and performance expected from a motorcycle with an engine displacing more than 350 cc. So, enter the 2019 Dominar 400, and it promises to address those concerns, and make it more appealing, both to domestic customers, as well as consumers in international markets. 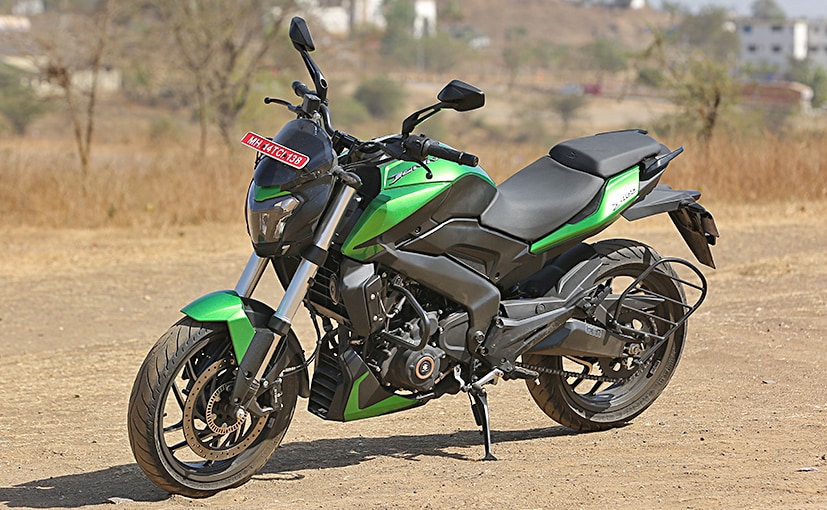 The overall silhouette of the 2019 Bajaj Dominar 400 remains the same. Look at it from a distance, and you will see no change, but there are some obvious giveaways that this is the updated Dominar. The front suspension now employs 43 mm upside down forks, and the exhaust is a double barrel unit, which enhances the muscular appeal of the bike with and also belts out a bassier exhaust note. Up close, there are some more changes. The headlight is visually smaller, although the overall design and shape remains the same. The taillight internals are also updated to give it fresh appeal, yet retaining the signature design identity of the Dominar 400. 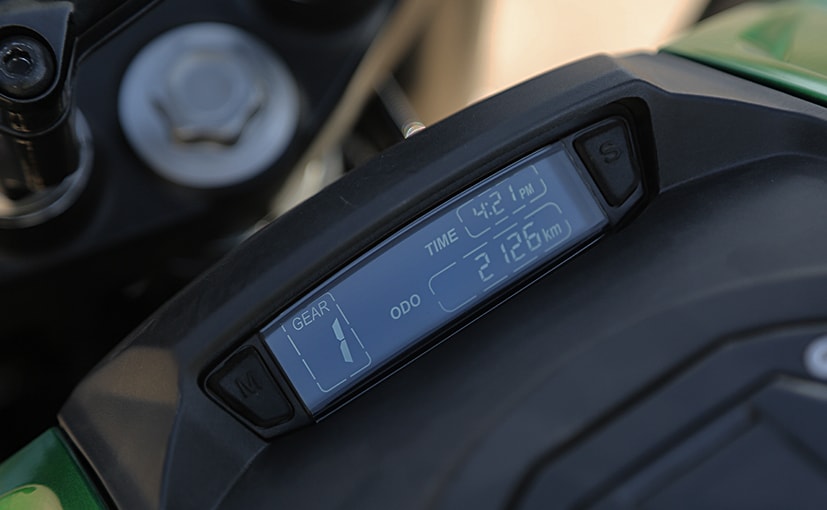 The dual display instrument console features more information now, with the secondary display on the fuel tank replacing the tell-tale lights with a gear position indicator, clock and trip information. Visibility of the secondary panel while riding is not very convenient though; you will have to take your eyes off the road to look at the secondary display panel. The primary display panel now features average fuel economy, dynamic fuel economy, as well as distance to next service. The rear view mirrors are new with cast aluminium stalks and the handlebar-end weights are slightly wider. 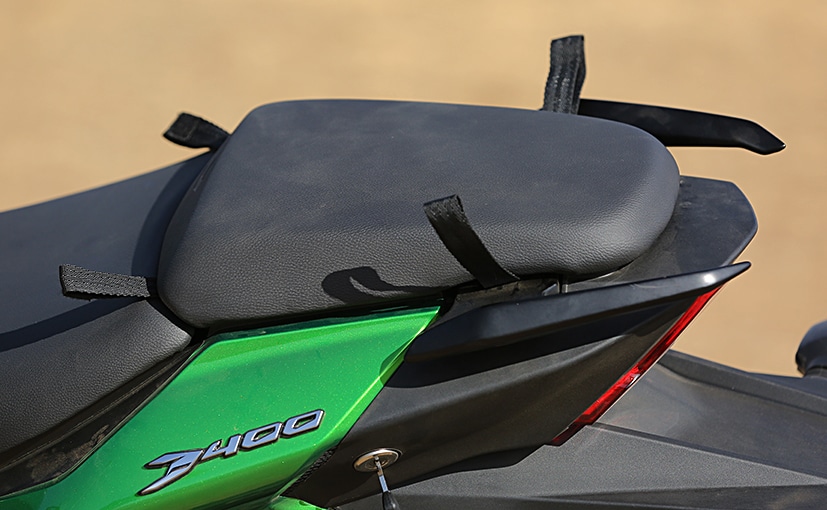 There's also a handy new feature under the pillion seat which features bungee straps which can be used to tie luggage for long distance tours. There's a new decal on the fuel tank, as well as a D logo embossed on the pillion seat. And the side stand is also new, with a broader print for additional support. And for 2019, the Dominar also gets new colours, what is called the 'Auroral Green' of our test bike and a black and grey dual-tone shade. The white and red shades will no longer be available. 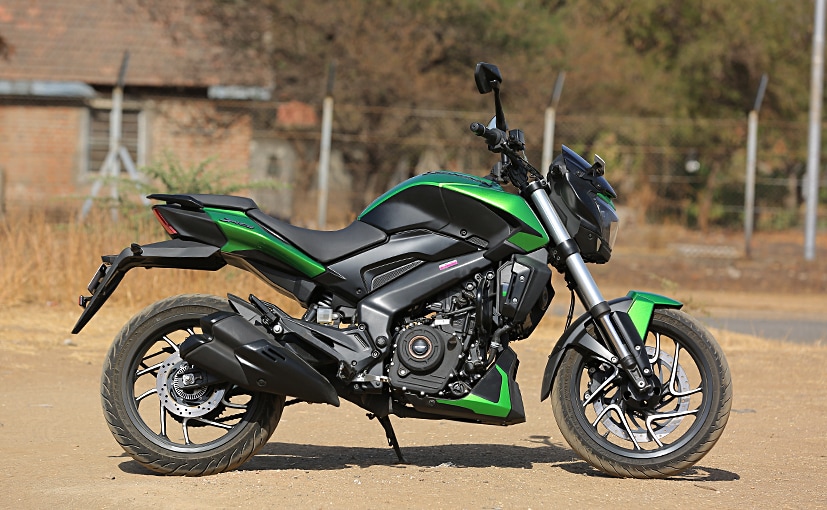 More than the cosmetic changes, there are more significant changes in the engine's performance and handling, which justify the 'new Dominar' tag. Right from the moment you thumb the starter, the bassy exhaust note sounds throatier and fuller, and it's immediately likeable as you accelerate through the gears. In terms of pure figures, the 2019 Dominar gets a 5 bhp bump in power; the KTM 390 Duke sourced 373 cc, single-cylinder engine now gets a dual overhead cam layout, re-tuned ECU, and together with the new exhaust design, it puts out 39.4 bhp at 8650 rpm. While peak torque remains the same at 35 Nm, it now peaks slightly higher in the revs, at 7000 rpm. 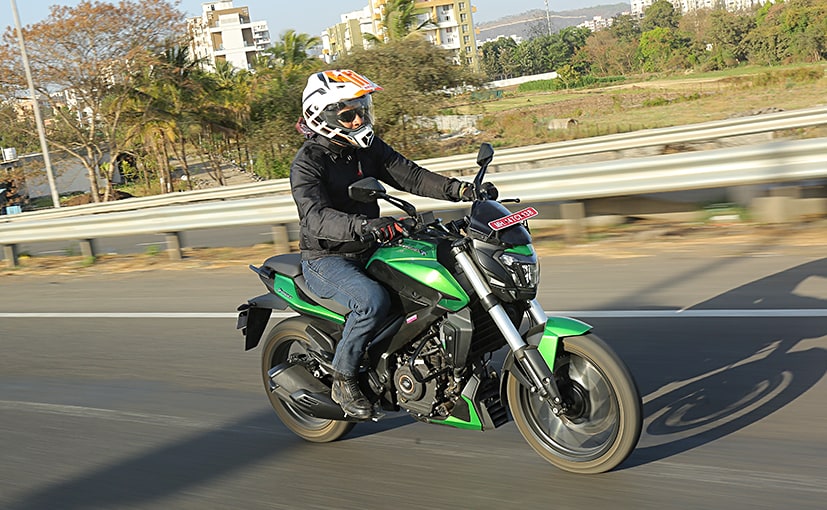 The 2019 Dominar feels eager to go, and 100 kmph in achieved with brisk pace

What that translates to in the real world, is that the new Dominar feels like it has slightly more go, with a higher redline, and the torque spread out over a slightly wider rev range. Sixty kilometres an hour comes very quick, and the acceleration to 100 kmph is achieved at just over 7 seconds. If it's highway cruising you're looking for, the new Dominar 400 can happily cruise at 120 kmph all day long. The engine's vibrations are still there, and you will start feeling them at around 3,000 revs and again at around 6,000 revs or so, on the seat and footpegs, but there's no sense of any vibes on the handlebar, thanks to the bigger, and wider bar-end weights. The new front suspension, changes in the engine and the exhaust also make the 2019 Dominar put on 2 kg, with kerb weight rated now at 184 kg. 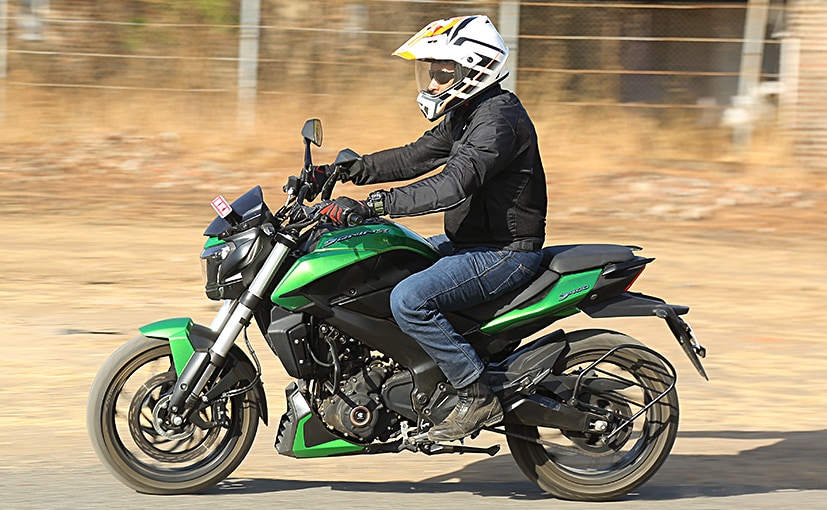 Given a long enough stretch of road, the 2019 Bajaj Dominar will hit 160 kmph

If the old Dominar needed some more punch, the new one does try to address that. The run up to 100 kmph is fairly quick, but if you're looking for quick high speed overtakes, then the Dominar still lacks the urgency to increase its pace quickly from, say 100 kmph to 140 kmph. Given a long enough stretch of road, it will easily hit 160 kmph, but if you're in a hurry to overtake other traffic going in a fairly good clip, you may be left wanting for more. That said, the throaty exhaust note, eager acceleration and high speed stability is impressive though. But what's a definite improvement is the way the new Dominar handles and its ride quality. 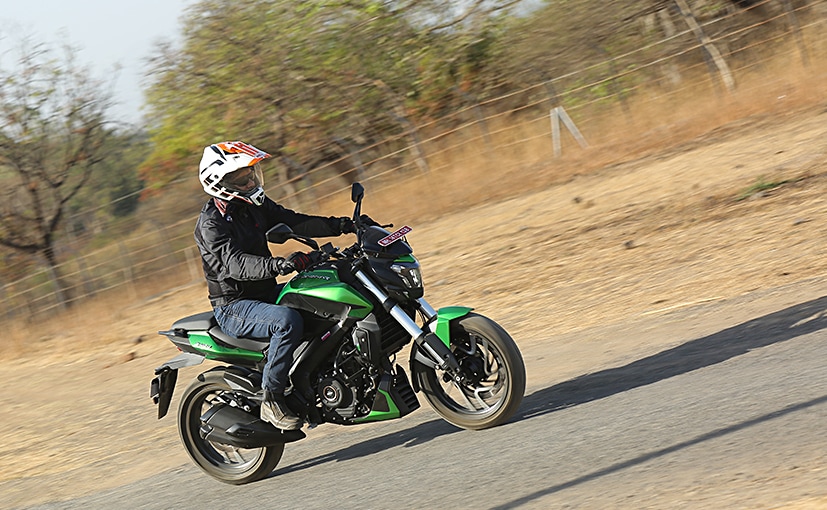 The USD fork on the 2019 Dominar lends it impressive stability, and ride quality is plush yet manages broken tarmac very easily

Bajaj Auto takes customer feedback seriously, and most of the updates to the new Dominar have been done keeping in mind customer feedback. The outgoing Dominar had a slightly stiff suspension to make its handling crisp and taut, but that resulted in a slightly stiff ride, particularly over bad, broken roads and the like. The rear suspension has been softened on the new Dominar and the 43 mm upside down forks from Endurance (again sourced from the KTM 390 Duke) have significantly improved the bike's handling. On our brief test ride, the Dominar retained its composure around the few corners that we threw at it, and it does so with remarkable poise and stability. 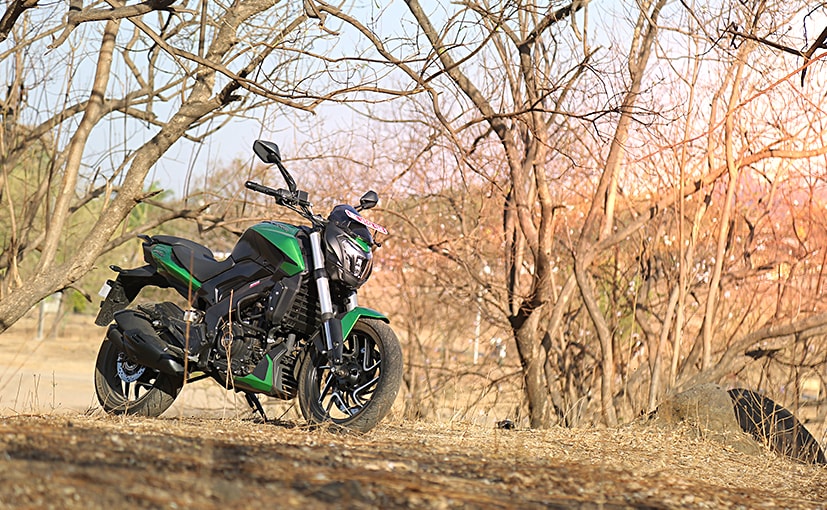 The updates to the suspension also include a softer setting on the rear shock, and ride quality and stability is quite impressive

Even more impressive is the ride quality. Our test route included a fairly broken down stretch of tarmac, with surface resembling many a Himalayan mountain road. We're happy to report that even at high speed, the Dominar retains excellent straight line stability, and the suspension gives the rider no cause for complain, and never did once it bottomed out or crashed while going over decent sized potholes and broken tarmac. The new Dominar certainly will satisfy the touring crowd, with decent highway speed, great stability and a sorted ride quality which refuses to bow down to harsh terrain. 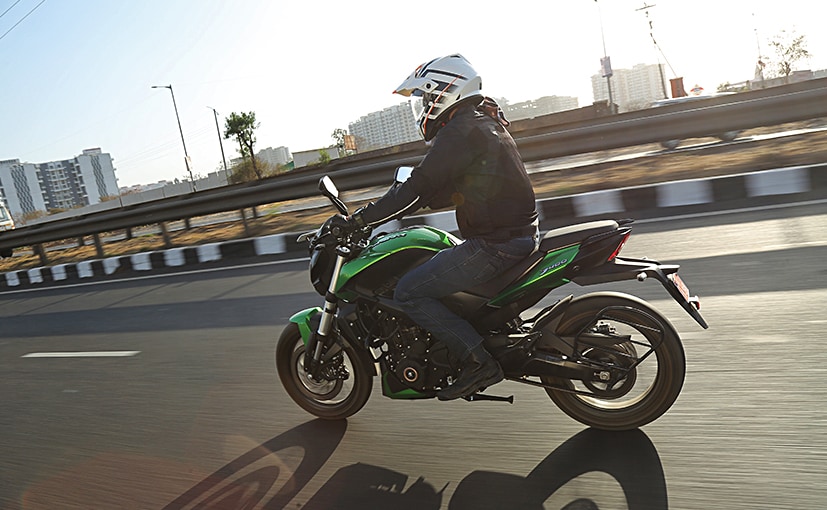 With the updates, the 2019 Bajaj Dominar 400 is likely to be slightly more expensive. The outgoing model retails for ₹ 1.63 lakh (ex-showroom) and the updated Dominar should be priced somewhere in the region of ₹ 1.8 lakh (ex-showroom). For that kind of price, you still get a well-rounded motorcycle which can be used within the city for the daily commute, take on long distance duties, and at the same time, take a fair amount of beating on gravel roads and the like. 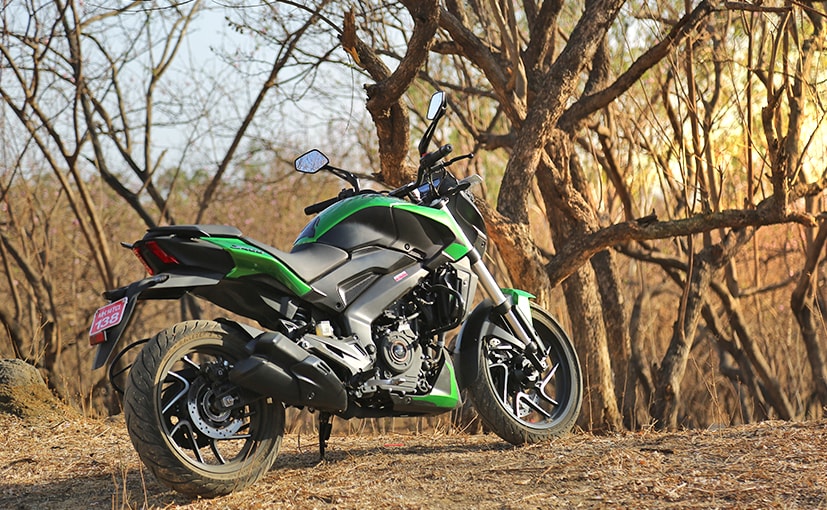 The 2019 Bajaj Dominar 400 does get improved and makes a strong case as a 'do-it-all' bike, including touring

As a touring bike, the 2019 Dominar certainly makes for a very good case, and at under ₹ 2 lakh, the Dominar 400 makes for a well-rounded, well-engineered product. Now, the question remains whether the updated Dominar 400 will be impressive enough to make Bajaj raise its sales volumes than what the previous generation did. But before you look at sales numbers, you should definitely check out the new Dominar, particularly if you're in the market for a 'do-it-all' motorcycle, and you have a budget of around ₹ 2 lakh. By all means take a close look, and a test ride of the 2019 Bajaj Dominar. It certainly deserves that, and could very well impress you.