The Isuzu D-Max V-Cross coming to India will be the new-gen model that was showcased in Thailand last year, and it will come with new premium exterior and interior, along with a new BS6 compliant engine.

A teaser image of the upcoming new-gen Isuzu D-Max V-Cross has leaked online. Reportedly the teaser image was briefly uploaded on the company's official website, however, Isuzu has now removed it and replaced it with the teaser for its soon-to-be-launched D-Max and D-Max S-Cab models. The D-Max V-Cross is Isuzu's premium, off-road-oriented 4x4 pick-up vehicle, however, like the other models in the company's line-up, it's yet to receive a BS6 upgrade. Having said that, this new teaser indicates that the company is ready with the new model, and the SUV could be launched in India, this year itself.

The BS6 Isuzu D-Max V-Cross coming to India will be the new-gen model that was showcased in Thailand last year. In fact, we even get to see the new, larger double slat grille, LED projector headlamps with LED daytime running lights, and the twin LED foglamps of the new-gen model in this leaked teaser image. What we do not get to see are the new muscular lines, new skid plate, beefy wheel arch cladding and black roof rails, along with matching black ORVMs and door handles. At the rear, the new V-Cross will feature vertically stacked LED taillamps that get distinctive dual-square lamps that stand out, while the tailgate design has also been completely revised.

The Thai-spec Isuzu D-Max V-Cross was introduced with a newly developed 3.0-litre turbo-diesel, producing 188 bhp and 450 Nm of peak torque. And, the company will likely introduce the same engine in India as well. The BS4 version, however, was powered by a 1.9-litre four-cylinder engine mated to an all-new six-speed automatic gearbox which in turn, was paired, with a shift-on-the-fly four-wheel-drive system. 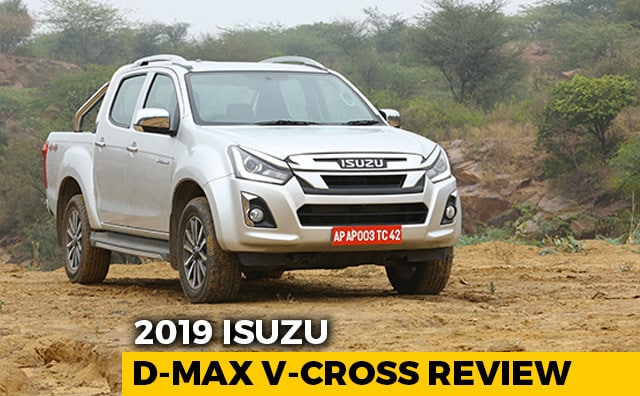 Isuzu Car Dealers in Other Cities