Audi has revealed the facelift of the Q7 and it sees a new design which is more in line with the Q family. The update to the Q7 is both visual and technological, to make the SUV a more feature rich offering. Big change comes to the front where the Q7 now gets a large octagon-shaped single frame grille with six upright slats providing the structure. This helps in adding a bit of aggression to the look of the SUV. The two-part side air inlets have a much more expressive line, just like the sill area that underscores the large SUV's ground clearance. Customers will have the option of going for HD Matrix LED technology with Audi laser light. 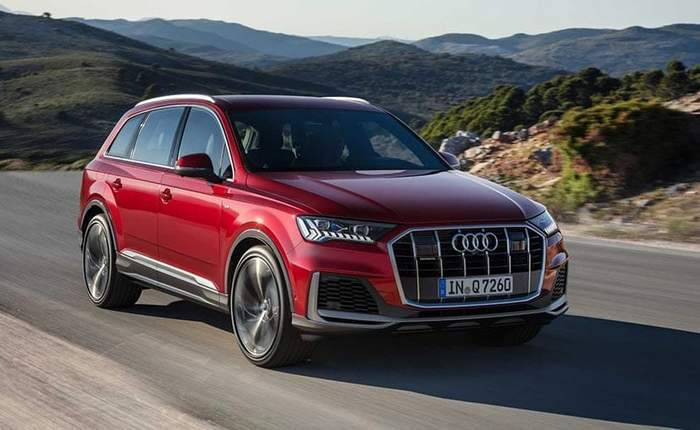 The rear of the Q7 too has been restyled and there's a striking chrome strip creates the visual connection between the flat rear lights with their technical-looking graphics. The Q7 will also be available with the optional S line exterior which comes with a blade in the front bumper, sportily accentuated underbody protection at the rear along with full paint finish and 19-inch wheels come standard. 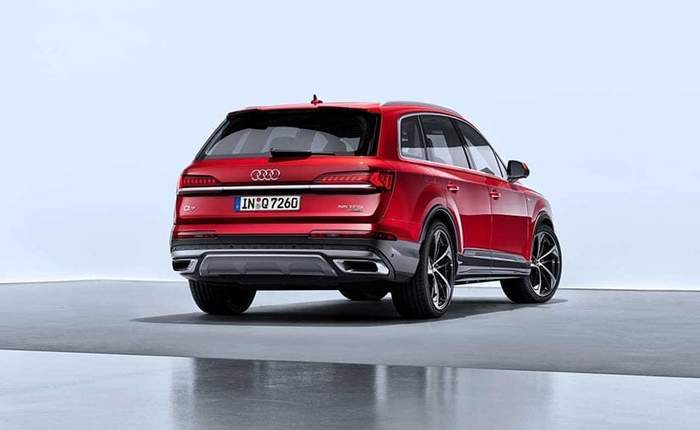 The Q7 gets an electromechanical active roll stabilization which is available as an option. The adjustable stabilizers reduce the body movements on uneven roads when driving in a straight line. With a sporty driving style, the focus is on optimum roll compensation - the tendency of the car to lean into the bend is reduced substantially. All-wheel steering is also optionally available: The rear wheels turn by up to 5 degrees in the opposite direction at low speed, which increases agility. On the highway these wheels steer slightly in the same direction to promote stability. All of the engines in the Audi Q7 are coupled to an eight-speed tiptronic and permanent all-wheel drive. Audi will give consumers a choice between two diesel engines while a petrol will soon follow. There will also be a plug-in hybrid model that will join the lineup. According to Audi, the mild hybrid technology reduces consumption by up to 0.7 litres per 100 kilometers. Its central component, the belt alternator starter (BAS), powers a 48-volt main electrical system in which a compact lithium-ion battery stores the energy. During braking, the BAS can recover up to 8 kW of power and feed it back into the battery. If the driver takes their foot off the accelerator at speeds between 55 and 160 kmph, the Audi Q7 recuperates energy, rolls in idle or coasts for up to 40 seconds with the engine switched off. The BAS restarts the engine the next time the accelerator is depressed, and does so faster and more gently than a conventional starter. The start-stop range begins at 22 kmph. Whether with five or seven seats - the Audi Q7 has ample space inside. Through its new design, the large SUV has now grown 11 mm to 5,063 millimeters in length. It's 1,970 mm wide and 1741 mm in terms of height. Depending on the position of the rear seat backs the luggage compartment on the five-seater version offers between 865 and 2,050 litres. The cockpit sees a digital operating concept, which incorporates two large touchscreens. They provide haptic and acoustic feedback when clicking on the touch controls. When off, the top display slots almost invisibly into the large black decorative surface. All elements refer logically to one another, from the flat air vent strip to the wide console on the centre tunnel.

Other Upcoming Audi Models are the New Q3, New A3, E-Tron and New Q5