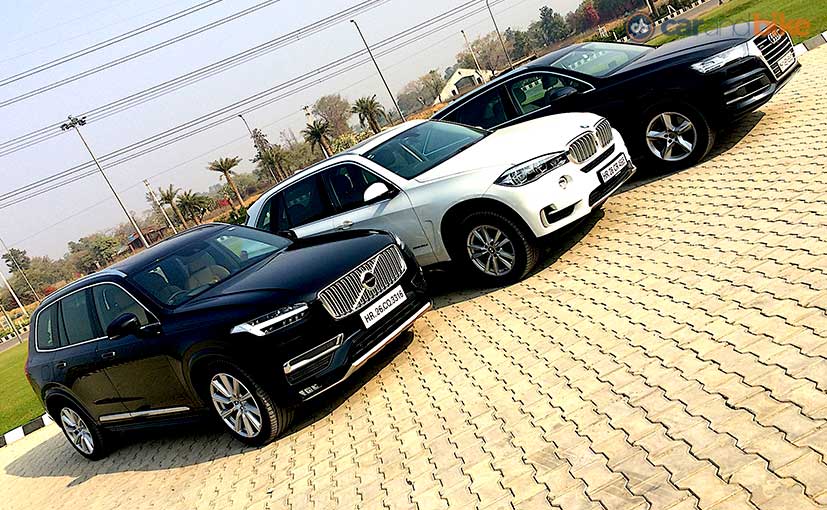 The new 2nd generation Audi Q7 has been hailed as a very well engineered and well executed product. The new car is a massive 325 kgs lighter than its predecessor, is 28% more fuel-efficient, is roomier, and delivers on performance, dynamics, technology and to a large extent - on design too. So just because it's the newest of the lot, is it the best?

So I have got a hold of the new Q7. But in my parking lot alongside it are the imposing BMW X5 and the stunning Volvo XC90. Are there other choices in this segment? Yes of course there are - the Mercedes-Benz GLE and GL, Land Rover Discovery and the Porsche Cayenne & Range Rover Sport at the high end. But the three cars I have picked rank as the most relevant rivals in my book - as each one really brings something unique to the table (and I don't mean just their individual style or brand appeal). They are also popular the world over and in India. 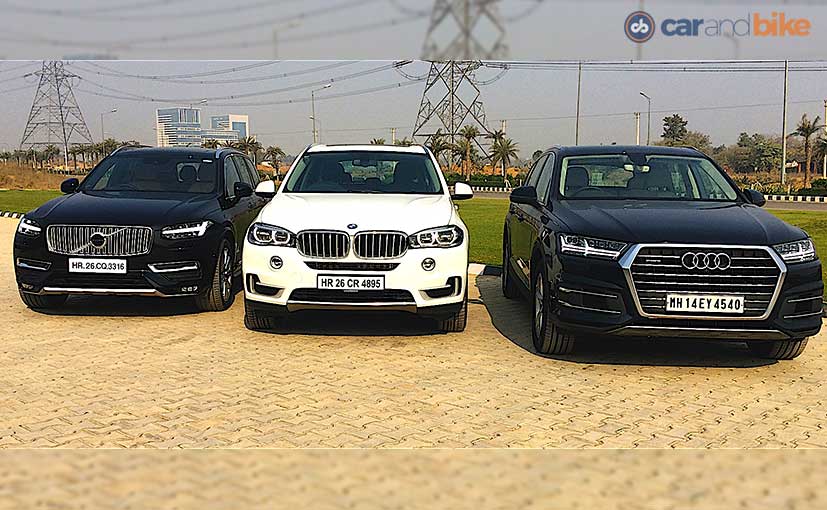 The BMW X5 is the car that sparked the premium SUV craze in many ways. The 3rd generation Sports Activity Vehicle as BMW calls it debuted in 2013 in its 3rd generation. In India we get the 30d engine only, which is the 6-cylinder/258 bhp diesel powerhouse. The 8-speed Steptronic sport transmission is quite quick and on the whole I really like this BMW drivetrain.

The Volvo XC90 came last year, and like the Q7 this second generation was also majorly delayed - more so in fact. But the wait was well worth it. The car is beautifully designed, has impeccable interiors, and follows Volvo's new philosophy of moving away from 6 cylinder engines to greener 4 pots. The XC90 currently offers just its 2 litre diesel in India. The 225 bhp output is good, but the 470 Nm torque is what really gets my attention. AWD is standard and so is the 8-speed auto gearbox

The Q7 has ample torque too. Its large proportions and massive hood signify power and brutish force. The chiselled face and flanks work well, but yes it's very typically Audi looking still - and looks like the previous car a bit too much. The 3 litre engine churns out a generous 245 bhp and 550 nm of torque that kicks in nice and low at 1500 rpm. And yes we have another 8-speed here too. 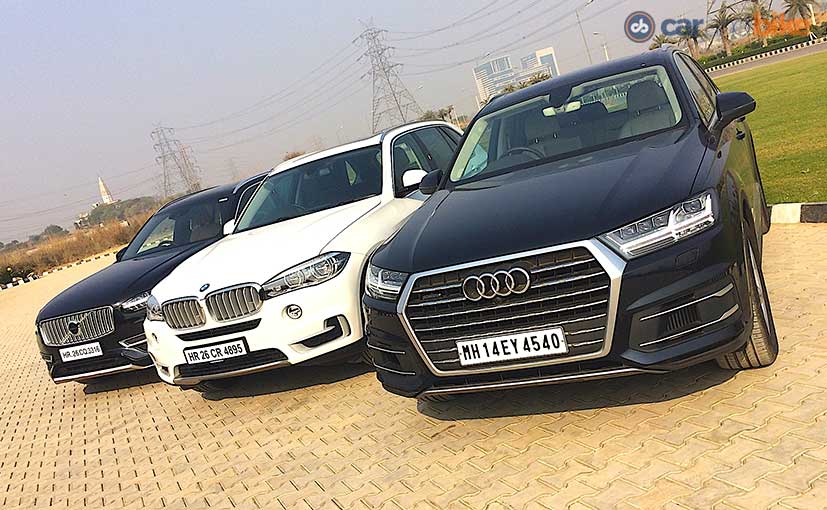 BMW X5 is the Most Powerful Among All Three with 258bhp

The first generation Q7 had the flowing coupe roofline. It was certainly a pretty car and it got all that attention for its good looks, courtesy Mr Walter De Silva while he was still at Audi. The new Q7 is a definite evolution of that but it takes one criticism of that last Q7 into account. It's not just trying to be pretty now. It's also looking mean, butch, big and muscular. It has got a huge, wide mouth up front - and it almost looks like it can have the others for dinner! The BMW X5 is all about macho good looks. The last generation X5 was also brawny but this one brings sophistication to that brawn. It certainly defines the quintessential truck image that an SUV is supposed to have, and I like it for that. The XC90 is so unique and definitely the prettiest of the three. Throw in Thor's Hammer and you got me completely hooked onto the looks of the XC90. 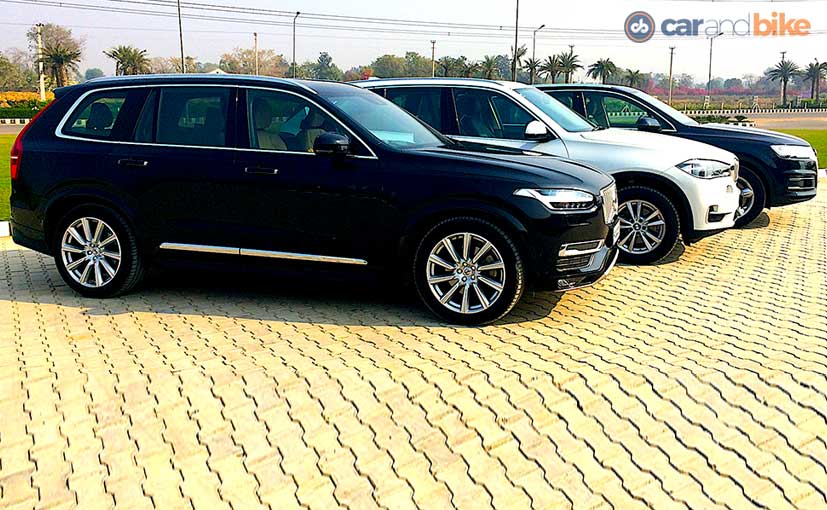 On the inside the three are very different too. While the X5 now looks the most dated, its subtle use of colours and lighter materials is still fresh. The material quality is impressive too and it has mostly all the equipment you can think of. The sound system is Harman Kardon. On the XC90 you get a Bowers & Wilkins, and the big highlight of its Scandinavian design is the Sensus touchscreen central console. The iPad-like screen is just terrific, with lots of easy to navigate features and commands. No buttons and switches in this car - it is all very minimalist and sleek. The seats too are very comfortable and you get a great sense of space. The new Q7's cabin is also very roomy and everything feels and looks solid and chunky. The gadgets are great, the music system is Bose - but what really grabs your attention right away is what Audi calls the virtual cockpit. This means that the instrument cluster is virtual and the screen is highly customisable - complete with full screen navigation. Very cool indeed. 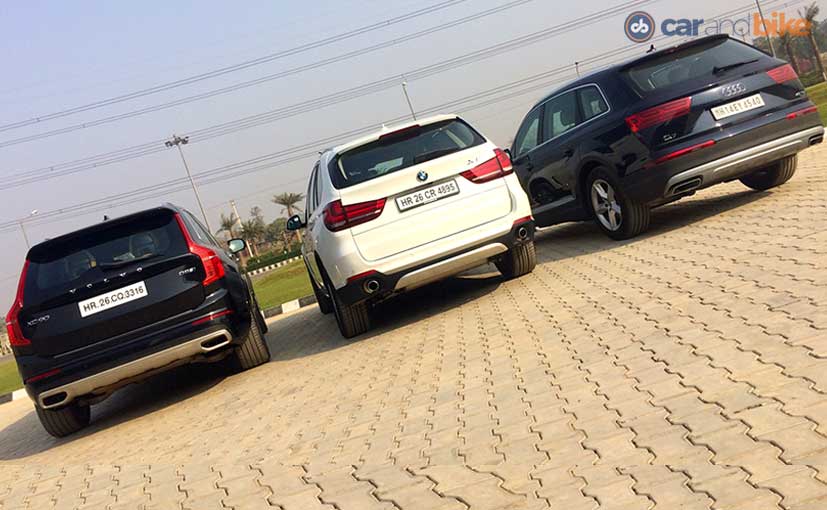 On the road too the three are very distinct. Sure the XC90 has the smaller engine, but still feels smooth and fun. That is until you get into the X5. It's definitely an ample engine, but you don't get the brutish sense of power which is surprising given the figures. It is very well mated to the gearbox though. Having said that the USP on the X5 is not so much the engine performance or the numbers, it's got to be the sheer strength of the BMW as a brand which comes forth in the X5 too - Driving dynamics. This is the best drivers' car around! The X5 is so precise that it's a treat to drive. The engine could've been punchier and so the car at times feels a bit heavy. But the steering and handling are super.

The Q7 though is the surprise package. It is not only dynamically capable but also has terrific ride quality. The car feels big, powerful, and ample and yet feels athletic too. The gearbox is a pleasure to operate using the paddles, and also in auto mode and the cabin is remarkably quiet. Each brand promises to bring us petrol variants of these cars over the next 4-10 months. The XC90 T8 plug-in hybrid will get here first in August. 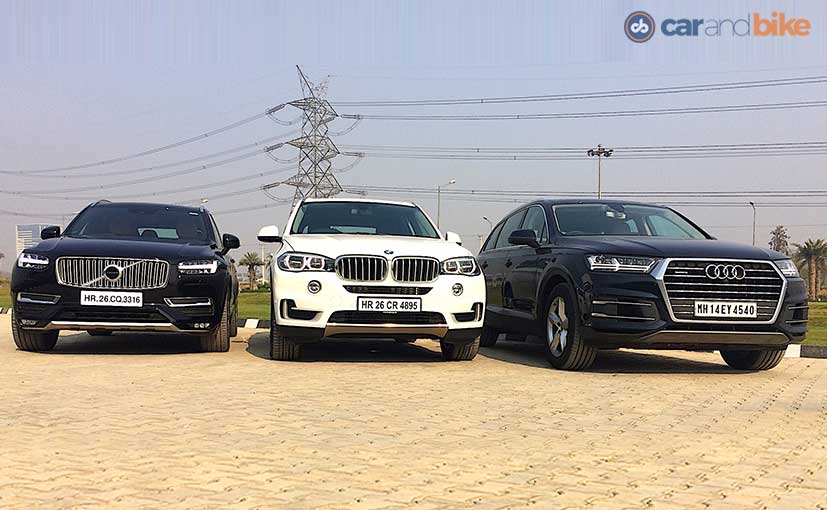 So now time for my verdict! Which SUV is practical for you to buy? And more importantly which one is just bloody good? Now this is possibly more true in a western context of how today an SUV is supposed to be different from before. It is supposed to be a more efficient and greener car. And be more practical as well. The fact that Volvo downsized its engine, well it certainly becomes the thinking man's SUV in that sense. So yes if I was thinking and therefore going with my mind the XC90 becomes possibly the obvious choice to go with. But in India people in this segment are looking to not just tick certain boxes on the practical side. They really want to go with something that announces their arrival, and so it must have the status symbol sort of attribute as well. Also remember these cars have to be big brutes. That's what SUVs are meant to be, So the BMW definitely has my heart because it's the car that is the driver's car that appeals to my more emotional sensibilities for obvious reasons. It is also good looking; well both the X5 and XC90 are good looking. So then where does that leave you? Now it's always almost a cliche when the new car is always thought of as being the best one. In this context it becomes important to actually accept as a bit of a truth, because when you are talking about the rivals they are always trying to best the last car. So because the Q7 is the newest, of course it is studded with the newest technology as well. So what has Audi managed to do with this car that the last Q7 couldn't quite get right? I was talking about how the XC90 has my mind. The X5 has my heart. This car is the meeting of both. The new Audi Q7 wins on both heart and mind.