Chasing Snow In The Hyundai Venue

Winter is all about the outdoors and impromptu plans are always the best! So, keeping that in mind, we took the Hyundai Venue to a quaint, less-known village up in Uttarakhand where we ended up chasing winter snow. 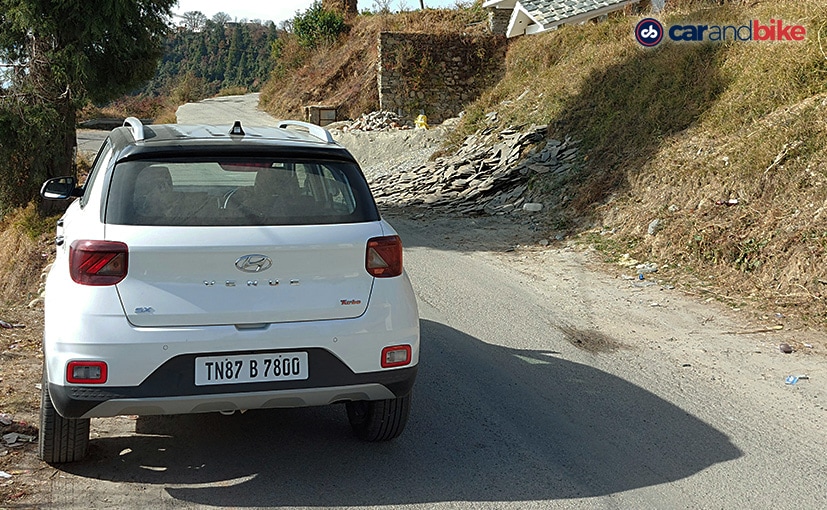 View Photos
The Hyundai Venue proved to be a mountain goat in the valley.

'Lockdown anxiety' is a thing and let's admit it, to an extent, most of us have had a harrowing time while staying indoors. One missed meeting friends, those warm hugs from our loved ones and weekend banter in general. This is why Delhi citizens try to go to the hills in the weekends, especially during winter. That said, it was really important for me to get a grip on my work-life balance as well and this is where a quick road trip comes into play! After all, few things are more rejuvenating than road trips with a bunch of old friends.

With the COVID scare looming, we were looking to go up to the hills but to a place which was less touristy, less people and better options to be at one with nature. 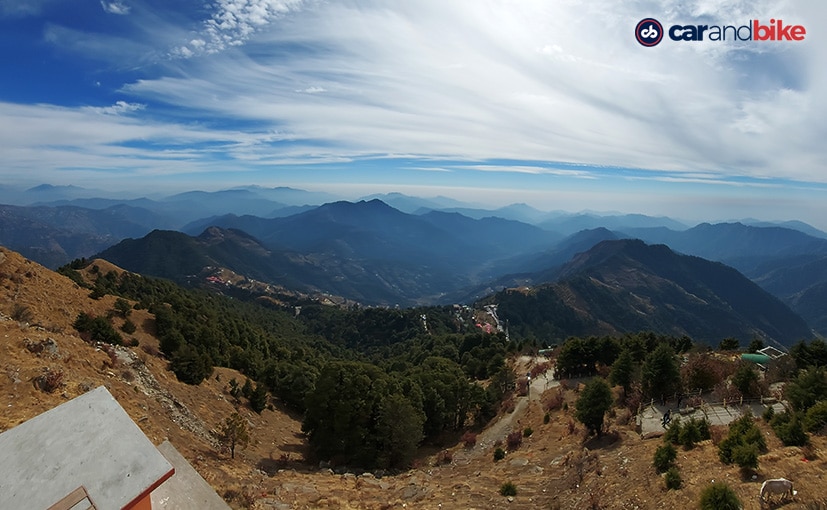 Kanatal is around 340 km from Delhi and 40 km from Mussoorie.

A dear friend, who hails from Dehradun, suggested one such place called Kanatal in Uttarakhand. It happens to be the highest place in that region, at about 2,590 metres above sea level. It's around 320 km from Delhi and is a 40 km elevation from Mussoorie, also involving a steep climb of 12 km from Dhanolti (PS: Go for 'DHANOLTI' on Google maps and NOT 'DHANAULTI'- that's a different village). For further reference, Kanatal is located just below Tehri Dam, which is the tallest dam in India. 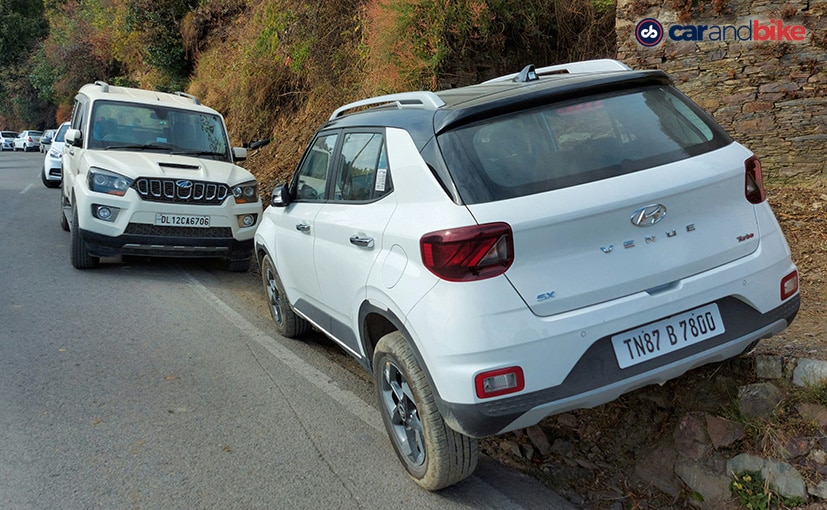 The compact size of the Hyundai Venue really comes to advantage while parking in a tight spot.

Also you have certain perks of plannig a trip with close friends who know you well. Here! I was promised an exhilarating drive involving equally challenging single lane roads and oodles of twists and turns up in the valley. I was just not in the situation to let it pass. But my friends scoffed at the thought of taking the Hyundai Venue uphill. "Thodi chhoti hai! Paharon pe problem to nahi karegi" and all. But I first drove the Venue in the tough terrains of Himachal Pradesh where we took it to Komic (Spiti) last year and never did it disappoint. So I was rest assured. 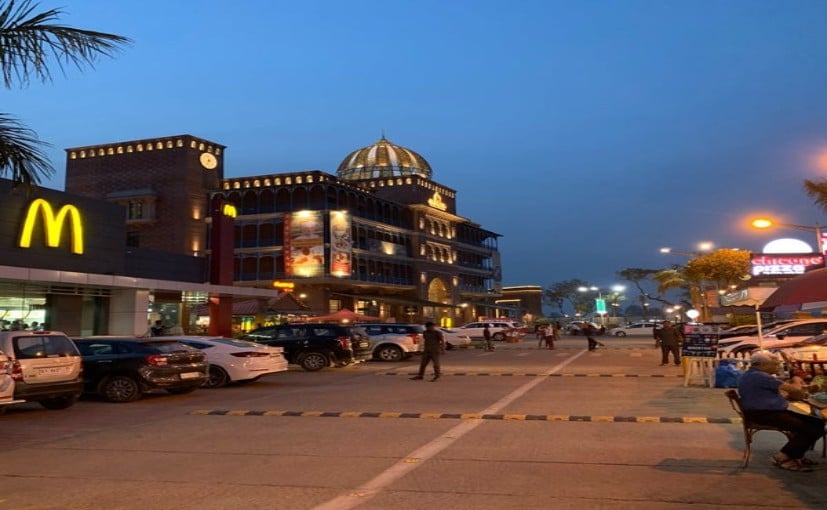 The Midway Subway is a must stop after Muzaffarnagar if you want to taste some lip smacking food from a cluster of dhabas.

Delhi to Dehradun obviously is a familiar route for many of us and honestly we're so used to it that more than the drive itself, we were excited about our stop at 'Midway Subway', a few kilometres after Meerut. It's a cluster of multiple outlets serving lip smacking food, and to top it all, it treats you with the best 'kulhad wali chai' in that region. So we got full enough not to take a second stop till Dehradun and I was really excited for the drive beyond, being promised of some mystical views. 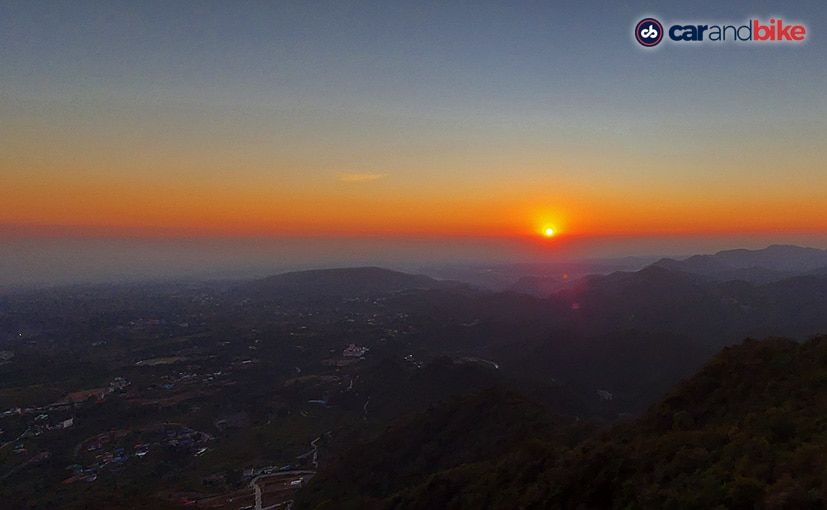 The skyline after mussoorie gets fascinating in the evening when you get to see the 'Winterline' between October and February.

Well! It was scenic indeed! The moment you head towards Mussoorie the mountains and weather calm you down and just before we took the right turn towards Dhanolti, we stopped for a tea break not because we needed it, but for the surreal skyline. You can see Mussoorie and Dehradun down the valley and 'winterline' over the sky. And it's difficult to describe that scene in words, but I'll try. It's like a beautiful blanket covering the setting sun with its radiance peeping out and throwing soft light on the valley. 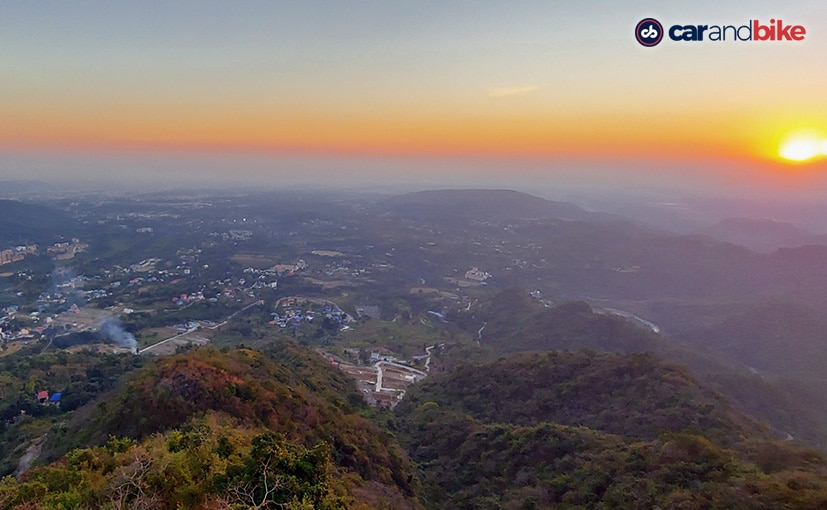 The 'Winterline' is a rare phenomenon seen only in the Dhanolti-Musoorrie valley and in the Swiss Alps.

Now that's something usual for the locals who enjoy the view from their rooftop but rarely anyone knows that the 'winterline' is a rare phenomenon. It's an amalgamation of hot gasses coming from down the valley and combining with the freezing sky. It's seen only at two places in the world. First, of course, is the Dhanolti-Mussoorie valley and second is Swiss Alps. And we were just fortunate to reach around 6 and get a scenic view for a good 30 minutes, sipping in hot coffee at the 'View Point' from where you get a panoramic view of the skyline. 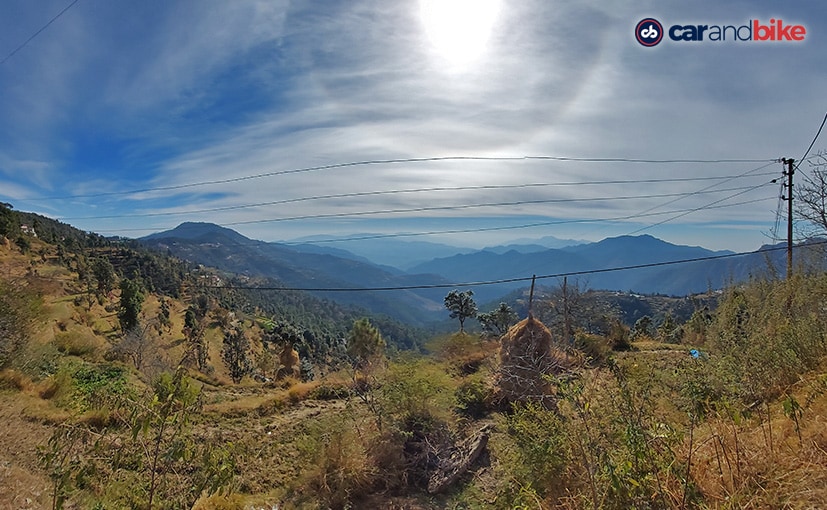 The roads leading to Kanatal are equally challenging and engaging to drive.

Well! With that done we finally took the right turn towards Dhanolti and this is where the most exciting part of my drive starts. What you encounter is a narrow and elevating stretch of road tapering at every bend and speaking of bends, hardly you'll find even a 50 m straight stretch! Now that was really the kind of twisties I was looking forward to and needless to say it made for quite an engaging drive. I have to say the Hyundai Venue again proved to be a mountain goat on this challenging stretch of tarmac. Okay you take a little time getting used to that tiny little bottom end lag, but you quickly learn to plan your move and its compact size comes to advantage while overtaking in the narrow valley or darting in and out of corners . This 1.0-litre turbo motor with the seven-speed DCT has enough grunts and never feels underpowered and that coupled with decent handling and fabulous ride quality keeps you happy all along. You even aren't as fatigued after a day long drive thanks to its comfortable seats, impressive NVH levels and overall ride quality. 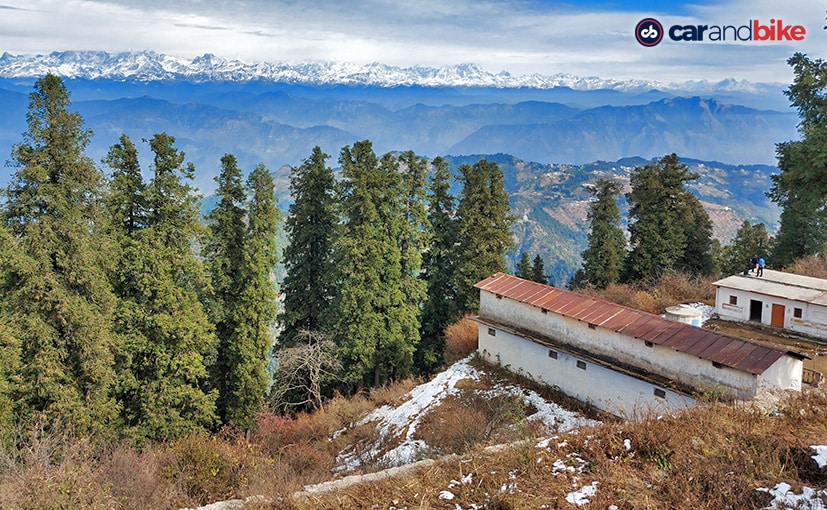 You will be just in awe of the snow-capped Himalayas and the splash of freezing winds just calms you down.

There's also a thing about driving in the valley. It actually gets easier to drive at night as headlights help spot oncoming vehicles and rarely will you find rash drivers here. And that made it really easy for us to reach Dhanolti in an hour or so. We still had some time on the clock and decided to stretch up to Kanatal and put up at a Bamboo homestay camp we looked up for on the internet. Actually! We were so done being confined within the four walls that we really didn't want to put up in a hotel and be as close to mother nature as possible. To our luck, we managed to negotiate the entire package at a pretty reasonable rate and found a safe parking spot inside the homestay as well. The package included snacks along with cocktail at the bonfire, dinner and the morning breakfast. 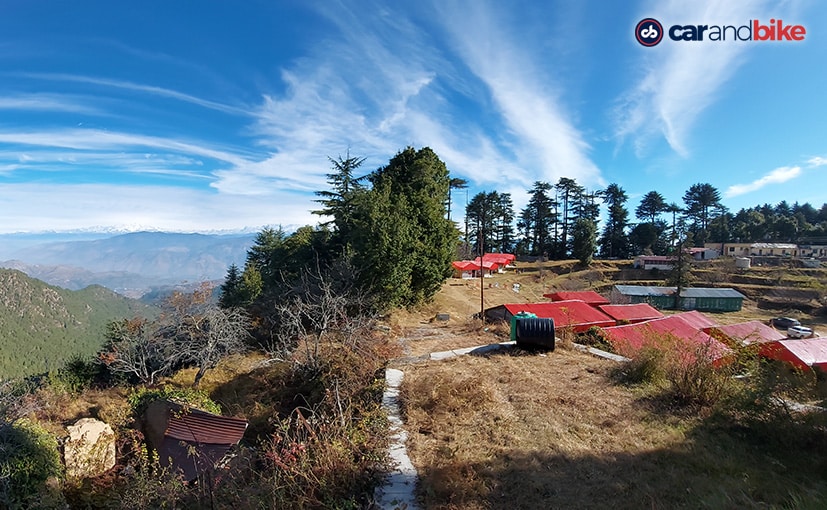 Our Bamboo homestay camp was surrounded by the Himalayas.

We thought that night would be just about relaxing and easing off around the bonfire with our drinks and soothing music playing in the background that gave its own high. But as they say! 'God plans better.' We were joined by two different groups including locals and Delhiites and in no time we all became mates, having our own little party all night. Just couldn't have asked for more. 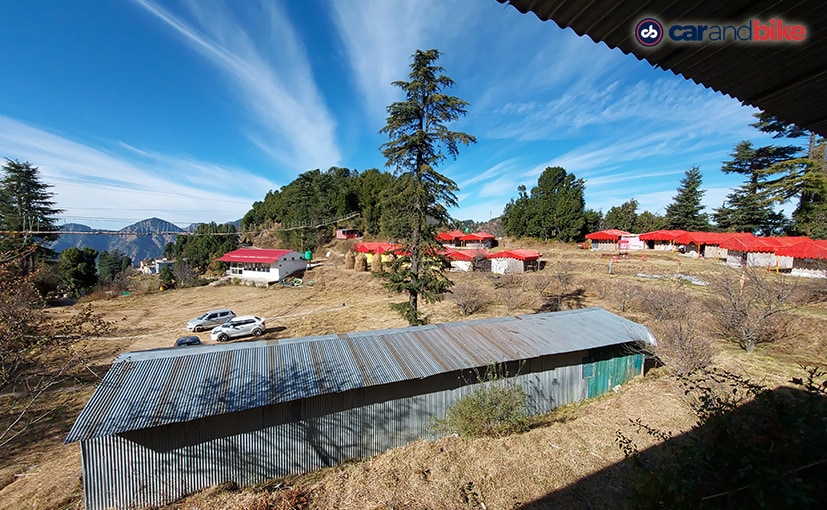 You can actually relax out in the open even in the freezing temperature of Kanatal when the sun is shining in all its glory.

The next day we took our own time to wake up and that's okay as we had our list sorted. The moment you step out of your little cozy bamboo room you feel a splash of cold wave on your face and get a crystal clear view of the snow-capped Himalayas. Kanatal is actually surrounded by the mighty Himalayas and honestly pictures don't completely justify the mesmerizing views our naked eyes saw of the vast Shivalik Himalayan expanse. Also, it's now you actually feel the drop in the temperature. But then the sun was generous on us and soaking in some sunlight with breakfast and tea in such a panoramic landscape has its own delight. 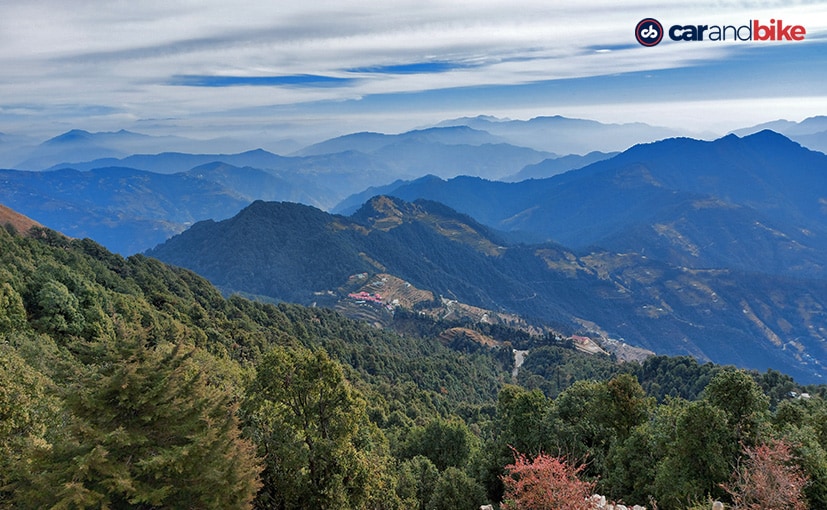 The 7 km long trek to the Surkhanda Devi temple is worth every step, promising a mesmerizing view of the entire valley.

Everything was all hunky-dory so far but then we were told that we can't make it up to the Tehri dam that day due to some work going on. It really disappointed us as that was said to be the best of all we would see in our short expedition. Now to cover up for the misfortune, we were told to take a small 7 km trek to Surkanda Devi Temple which gave a proper view of the entire valley and the Himalayas. Well! It did and the trek was worth every step and to our fortune, there had been a nominal snowfall the last night. You know, you can find peace in strange ways and sometimes it's just about being in the right moment. This was one of those. 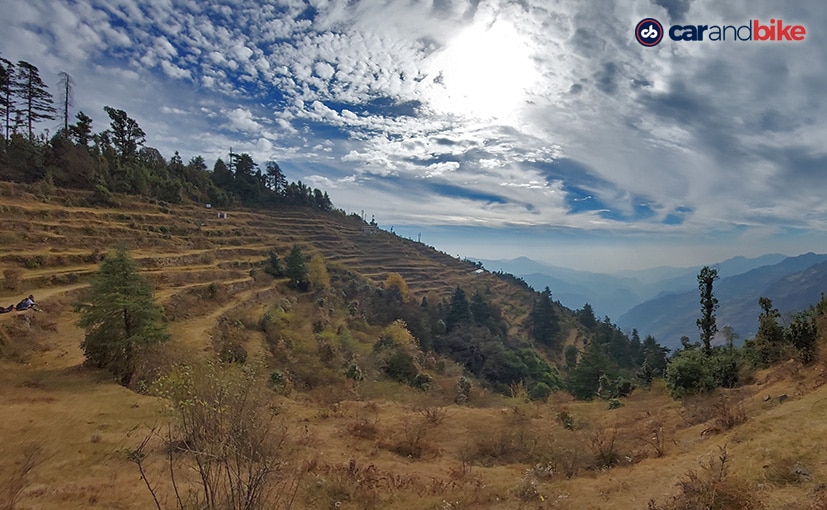 The famous Eco-Forest in Dhanolti promises another picturesque view after a short 2 km trek to a huge nursery in the hills.

And with that we were off from Kanatal. On our way to Delhi we had to stop in Dhanolti as well to visit the famous Eco-Forest that promised yet another picturesque view after a short 2 km trek to a huge nursery in the hills. At this time of the year the temperature here is moderate as per mountain standards and sitting under the sun on the supple grass of the peak will make you lethargic and you may doze-off. Really didn't want to move but then few restaurants along the sides of these mountains were serving delicious food cooked in Pahari spices and we surely didn't want to miss that.

We could have just not have imagined that such an impromptu plan could turn out to be such a gratifying trip being indulged in some really fun activities with new company while mystical views of the mountains were our constants. It was one of those excursions that brought a healthy dose of peace and pleasure and on our way back to Delhi I was just thinking of one good reason to come back. Well! Tehri dam it is.