New 2018 Jeep Wrangler Unveiled: All You Need To Know

The new-generation Jeep Wrangler has finally been unveiled on the lines of the ongoing LA Auto Show. It is the perhaps one of the most iconic and most well-known automobiles ever! The Wrangler will be available in the Sahara and Rubicon variants and get a whole bunch of updates to the exterior and the interior as well. 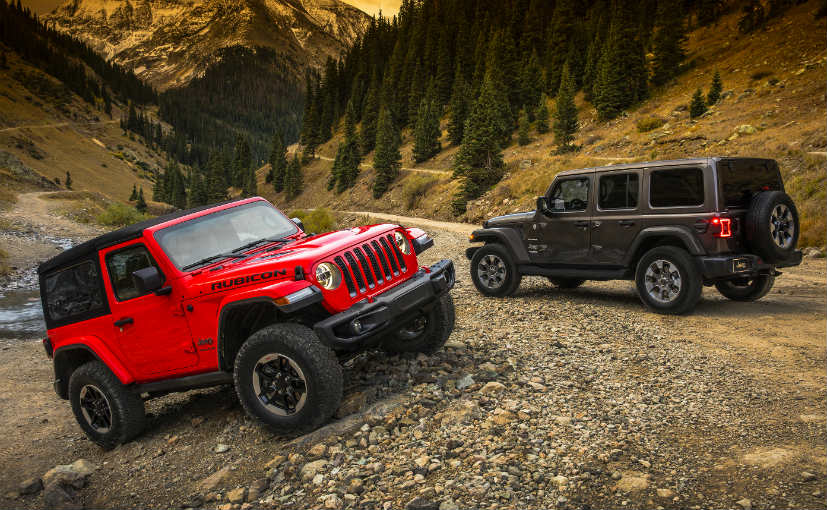 Its official. Jeep has finally taken the wraps off the brand new 2018 Jeep Wrangler at a private event before the Los Angeles Auto show and we were there to witness the iconic SUV in its brand new avatar. The Jeep Wrangler is possibly one of the most recognisable automobiles in the world with its basic design language staying almost unchanged since the Willys Jeep of early 1940's. The new Wrangler, while having its own identity has borrowed a fair few references to Jeeps from the past and as always, the attention to detail on this new Jeep offering is truly impressive. The Jeep Wrangler in its new avatar will also be making it to India eventually with both petrol and diesel engines and will replace the current generation Wrangler that has been on the market since Jeep's official India entry in 2016. 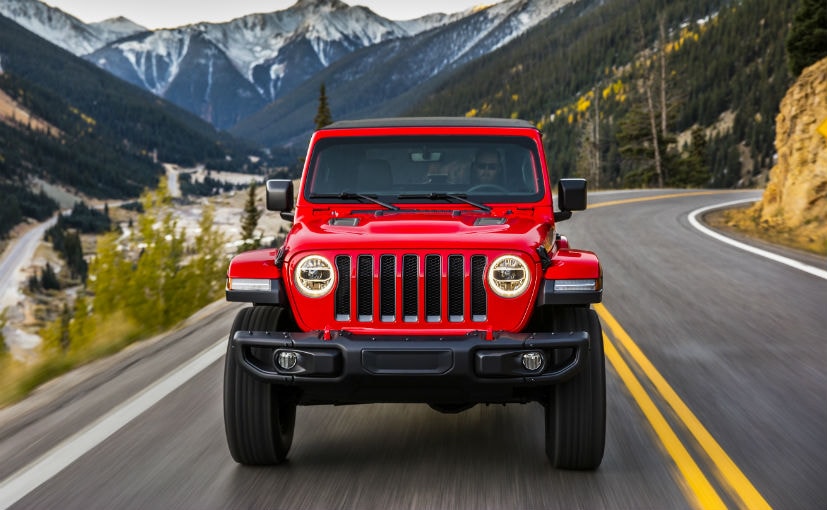 So lets start with design. The new Jeep Wrangler now gets a new platform that is lighter, larger and at the same time, as capable off-road as the ones in the past. The new Jeep Wrangler's biggest change from generation to generation in terms of design has to be the front grille and headlight setup. Just like the original CJ5, the new Wrangler gets the iconic 7-slat grille with the curved slot (that was needed to fit larger headlamps back in the day). The new grille is also no longer just flat but now features a more angled approach that actually makes it a lot more aerodynamic as compared to the older cars. The new Wrangler's headlamps are now full-LED units on the top spec variants along with LED daytime running lights inbuilt into the front fender. The headlight itself also has a halo LED daytime running light setup that runs in unison to the secondary DRL that we mentioned earlier. 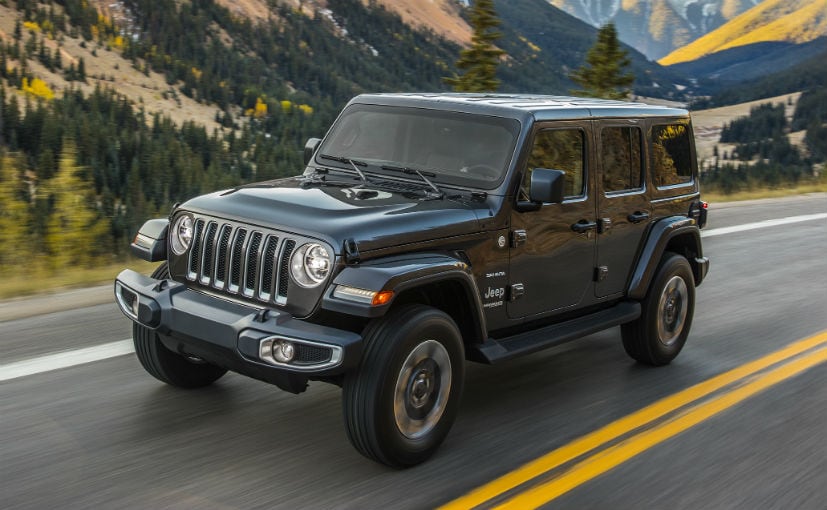 The new Jeep Wrangler also gets a completely redesigned set of wider and more detailed fender flares as compared to the last generation and the fender itself - for the first time, is vented and has slightly inset design element to it. This new fender design is not only functional but also gives the Wrangler a lot better stance. The 3-door Rubicon is also offered with a vented bonnet that adds even more aggression to the overall design. While the overall shape is pretty much familiar and very recognisable, the Wrangler does have a lot of changes when placed side by side with the older gen model. The windscreen for example is now raked a little more to aid aerodynamics, the wheels are further apart than ever before and the Wrangler gets a small built in spoiler at the rear too.

The rear too has been completely redesigned. You now get the tailgate mounted spare tyre set a lot lower than earlier and for the first time, the Wrangler now also gets a reversing camera. The new Wrangler also gets a new LED tail lamp setup which, true to tradition, is a separate unit that seems to be attached to the car and not a part of the sheet metal itself. The new tail gate is also larger and is more contoured now than ever before. The number plate mounting area has also moved to the rear bumper as compared to the tailgate. 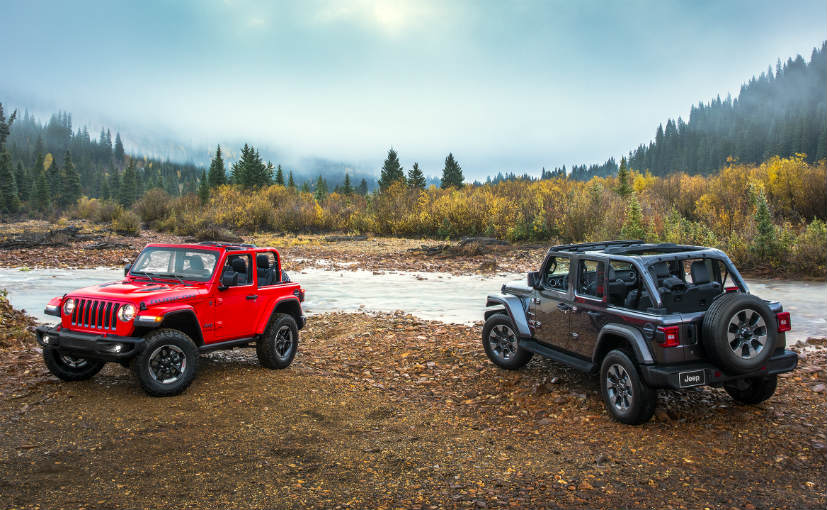 The Wrangler is available with a set of 17-inch wheels or 18 inch wheels (on the Sahara). While in the past, buyers who wanted to customise their cars had to opt for a lift kit or new fenders to mount larger wheels and tyres, Jeep this time around has instead given the Rubicon or the 3-door wrangler a set of different and slightly higher fenders with more internal space to be able to take 35-inch tyres with no issues. The Rubicon also gets additional features like a different metal bumper that has removable ends to offer better approach and entry angles and the iconic red cast tow hooks that are usually available on the Trailhawk model. 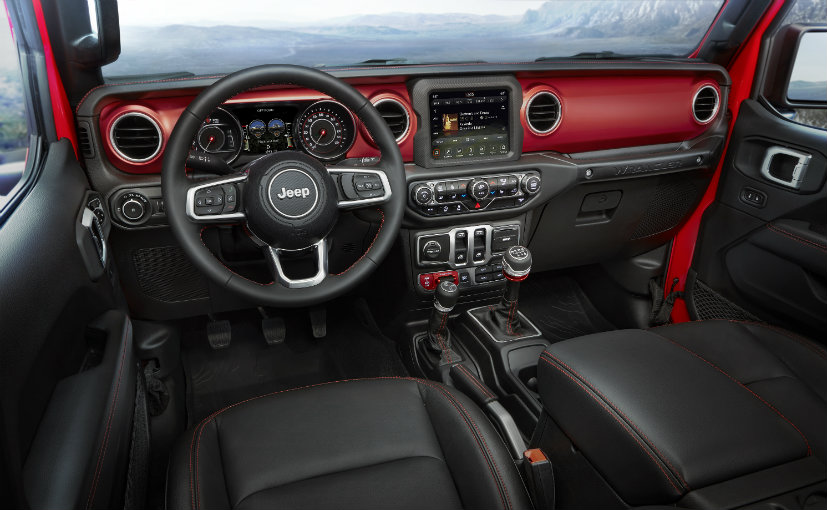 While the exterior on the new Jeep Wrangler is evolutionary, the big leaps in terms of technology and in terms of quality have been made on the interior of the car. Fit and finish along with the quality of all the materials is now a lot lot better as compared to the previous generation - especially on the 4-door version. The new Jeep Wrangler gets large touchscreen infotainment across the variants with the top spec getting a high resolution and very responsive unit that comes packed with features like Apple CarPlay, Android Auto, satellite navigation and satellite radio. The new Jeep Wrangler also now gets a large information screen in the instrument cluster that helps out with vital driving data.

While the seats are still mechanically adjustable, the new Jeep Wrangler is more spacious and as we mentioned earlier, comes with better quality materials. You have the option of cloth or leather seats (depending on the model) and the rollcage is now body coloured instead of being wrapped in a black vinyl. The Wrangler also gets a completely new dashboard design - that can also be ordered in a leather wrapped option or in a special silver or red painted panel. Jeep also offers a red interior package to go along with the Rubicon variant's red exterior detailing.

Rear seat space has been increased due to a longer wheelbase and rear seat comfort is now much better due to a slightly more reclined seat back angle. The Wrangler also comes with both a soft top or a hard top version. Both are now much much easier to remove completely of manually fold into the back of the Wrangler. The Jeep Wrangler will also be offered with a powered roof option that can slide back, which can then be taken off completely. The doors too can be taken off with just two bolts on each door and Jeep will be offering a special tubed door accessory next year onwards as a part of its Mopar catalogue.

The Jeep Wrangler is now considerably lighter than its predecessor. While the body is still made out of steel, the doors, bonnet and fenders are now made out of aluminium. The tail gate structure is actually made out of light weight magnesium and is skinned with an aluminium body panel. Under the skin, the Jeep Wrangler was designed to be a dominant force off-road. With four wheel drive as standard on all Wranglers, the Jeep DNA clearly has not been diluted here. The Jeep Wrangler also gets diff locks that can now be activated by an electronic switch on the central console and a button to disconnect the sway bars for extra articulation. Obviously, as always, the Jeep Wrangler will have a 4-wheel-drive high and 4-wheel-drive low mode along with a new 4-wheel-drive auto mode that will work based off sensors that measure traction slip.

Other off-road equipment will include skid plates both in the front and rear along with built in tow hooks. The front and rear bumpers are both winch ready and as we mentioned earlier, some models will get removable end caps on the bumpers to improve approach and departure angles. The Jeep Wrangler offers 276 mm of ground clearance with a 44 degree approach and a 37 degree departure angle. The Jeep Wrangler Rubicon will also be offered with a first ever 33-inch tyre package on a 17-inch off-road wheel. The Jeep Wrangler will also have a water fording capacity of 30 inches!

Under the hood, the Jeep Wrangler will get a 2.2-litre, 4-cylinder, turbocharged petrol engine that features mild-hybrid technology for the first time ever. The Wrangler will also get the tried and tested 3.6-litre V6 naturally aspirated Pentastar engine, which will be the top spec petrol model. On the diesel side of things, while international markets will get a 2.2-litre diesel engine, the United States market for the first time will get a diesel engine in the Wrangler in the form of the 3-litre motor that also does duty in the Grand Cherokee in India. The Jeep Wrangler will only currently be available with an 8-speed automatic gearbox - which is also brand new and no manual option will be offered.