Lamborghini says that the Essenza SCV12 was primarily born for the race-track and its engineering solutions are derived from the company's racing experience. 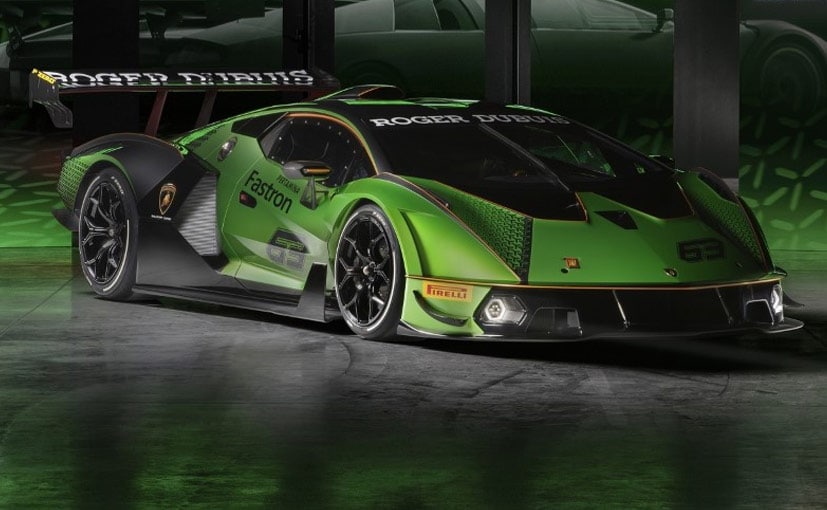 View Photos
The Lamborghini Essenza is powered by a 6.5-litre V12 engine.

Every time Lamborghini comes up with something new, we expect the model to push the limits and impress us to no ends. The Lamborghini Sian Roadster stumped us earlier this month with its striking looks and being the fastest road-legal Lamborghini in production and now the track only Lamborghini Essenza SCV12 goes a step further. Lamborghini says that the Essenza is born for the track and its engineering solutions are derived from racing which we earlier saw in the teaser images Lamborghini shared when the car was undergoing testing. 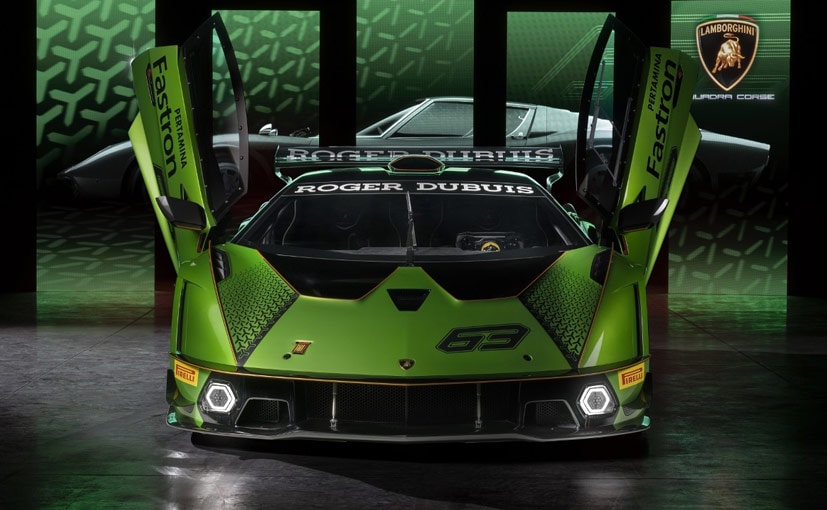 The Lamborghini Essenza SCV12 is powered by the 6.5-litre V12 engine, making 819 bhp with significant power uplift from the ram effect at high speeds. The exhaust pipes were designed by Capristo to reduce the back pressure, improving performance and its exhaust note. The power is channelled by a new X-trac sequential six-speed gearbox which is integrated as a structural element within the chassis and sends power to the rear wheels. The Essenza SCV12 features an impressive power-to-weight ratio of 1660 bhp/tonne. which is achieved using a new-generation carbon fibre monocoque chassis without internal roll-cage. It's also the first GT car developed to adhere to FIA prototype safety rules. 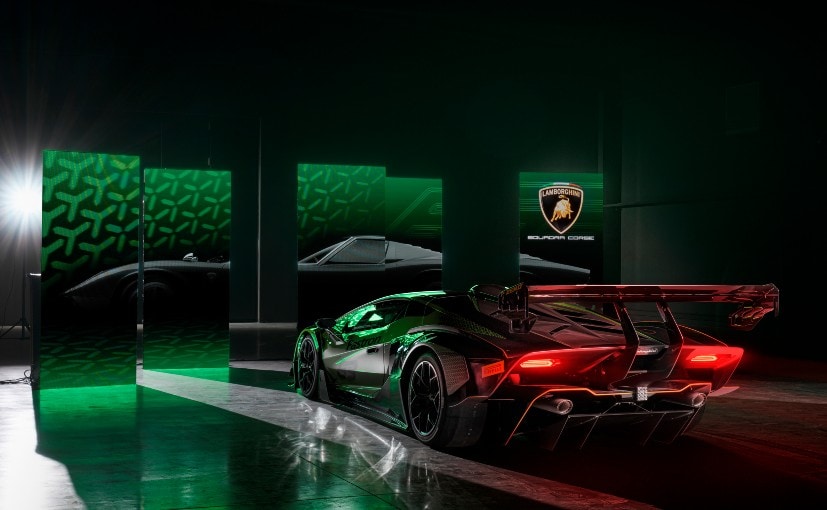 The aerodynamic package gets complete with the colossal adjustable double-profile rear wing.

In a bid to ensure maximum agility and stability on the most demanding tracks, Lamborghini has adopted kinematic suspension solutions inspired by racing prototypes. It includes a push-rod rear suspension installed directly on the gearbox and it is equipped with specific slick Pirelli tires mounted on magnesium rims - 19-inch up front and 20-inch at the rear. The disc brakes and callipers have been developed by Brembo Motorsport. Aerodynamics have been developed by Lamborghini's Squadra Corse GT racing experience to ensure a high level of efficiency and even higher downforce levels than a GT3 car, generating downforce of up to 1,200 kg at 250 kmph. The front hood has a double air intake with a central rib, typical of the Huracan racing cars, which separates the hot airflow coming from the radiator and transports the cold air to the airscoop located on the roof. The front features a splitter and two lateral elements on the sides. The flows for engine and gearbox cooling have been optimised through the use of vertical fins situated on the sides. The aerodynamic package gets complete with the colossal adjustable double-profile rear wing. 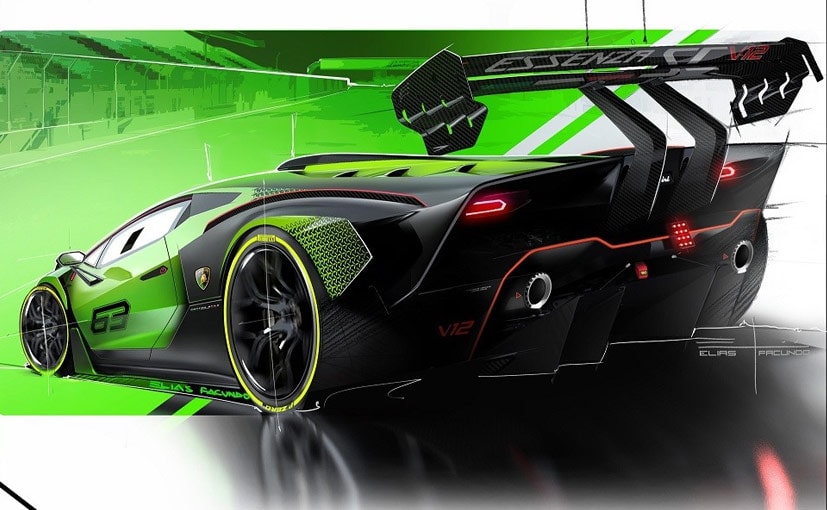 The Italian brands says that it's engineers have tried to bring the best amalgamation of lightweight, functionality and design.

You'll be surprised to know that the design of this new-age machine is inspired by the 1970s prototypes and elements, like the hexagonal geometry that characterises the front headlights and the roof airscoop and air vents that frame the steering wheel. The "Y-shaped" elements which are so typical of Lamborghinis are apparent on the design. The Italian brand says that its engineers have tried to bring the best amalgamation of lightweight, functionality and design. In fact, the instrument panel and dashboard are supported by an asymmetrical carbon "Y". The design of the multi-function steering wheel with display was inspired by F1 single-seater steering wheel and it offers the best ergonomics, ensuring the driver does not need to remove his hands from the steering wheel. The FIA homologated OMP seat with carbon shell ensures comfort, safety and stability. 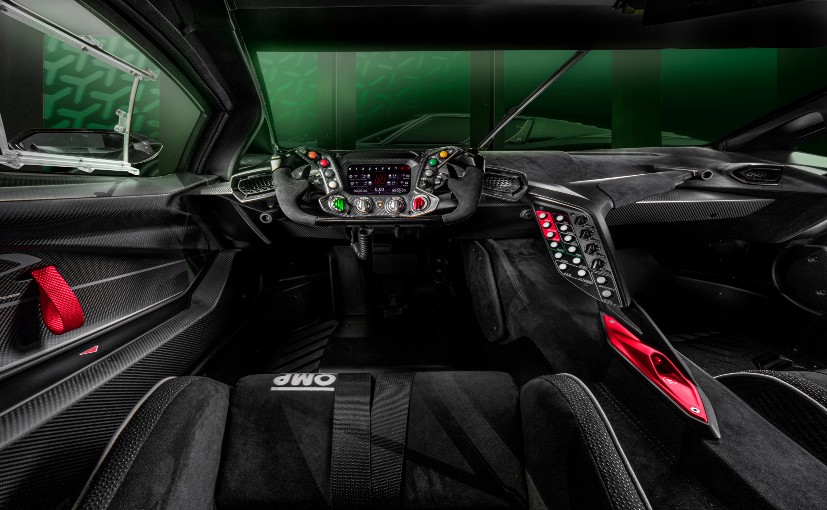 Lamborghini will manufacture just 40 units of the Essenza SCV12 and each car will have a personalised garage and dedicated services, including webcams allowing customers to monitor their cars 24 hours a day using an app. The facility also houses the "Lamborghini Squadra Corse Drivers Lab" by Tecnobody to offer athletic training programs similar to those followed by the official Lamborghini racing drivers. The track calendar will start in 2021 with "arrive and drive" events held at numerous FIA Grade 1 homologated circuits. Assistance will be provided by the Squadra Corse technical staff with the support of Emanuele Pirro, five-time winner of the 24 Hours of Le Mans and a tutor for the customer-drivers; and Marco Mapelli, Lamborghini Squadra Corse Factory Driver.