Italian brand 2electron uses technology which intends to emulate the experience of riding a motorcycle with different internal combustion engines.
By carandbike Team 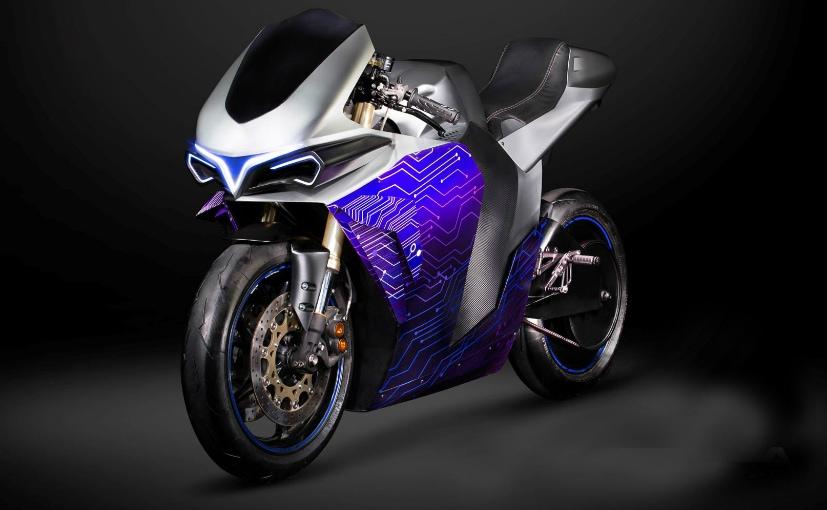 Italian company 2electron, a division of Zener, an automotive technology company based in Turin, Italy has introduced the innovative Emula Concept electric motorcycle. The firm has introduced highly innovative technology, called McFly, which intends to emulate the experience of riding a motorcycle with an internal combustion engine, but with electric power. 2electron's McFly system uses a virtual gearbox, faux gearshifter and clutch levers, adjustments to power delivery, and speakers placed strategically on the chassis to give the rider the choice of sounds from different kinds of internal combustion engines. 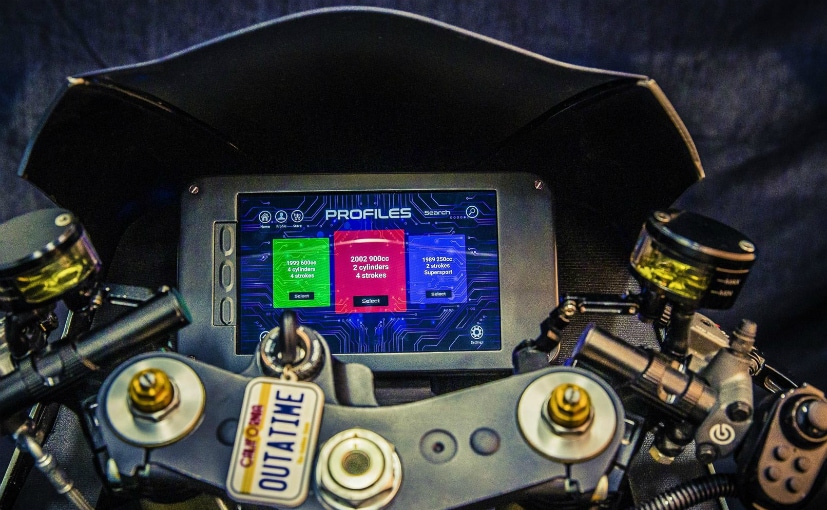 The McFly technology allows the option to select between various powerplants, and on the concept at least three different choices are available. There's a 1999, 600 cc in-line four-cylinder engine, a 2004 800 cc, four-stroke twin, as well as a 1989 250 cc two-stroke single. By the time 2electron makes a production-ready version of the Emula, the firm intends to have many more virtual engines to choose from, including a 1980s 125 cc two-stroke, or even a modern 200 bhp superbike. 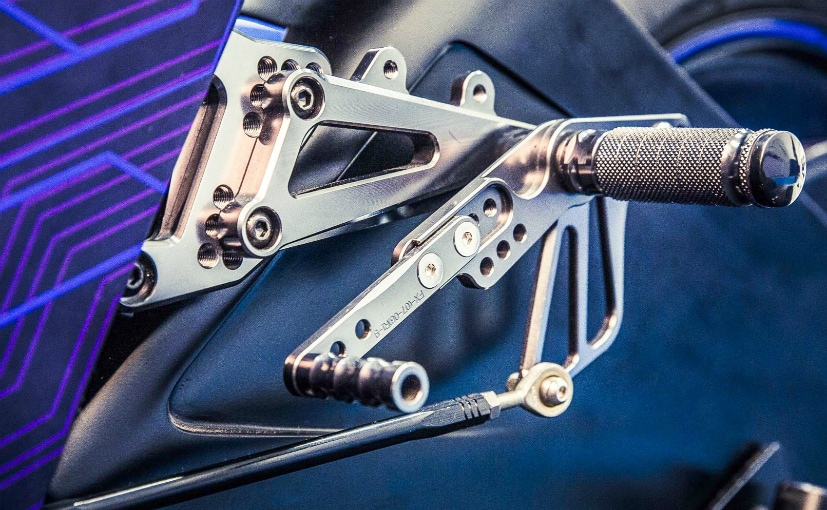 The Emula Concept has a gear lever, and gear ratios, performance and sound are manged by the McFly technology

To do this, the software manages the electric motor to copy the performance, gear ratios, powerband, sound and even vibrations of a conventional bike. And it also has a basic mode, called the Emula-Boring mode, which allows the user to ride it like a conventional electric bike, with just one gear and twist and go throttle operation, with a top speed of 250 kmph. 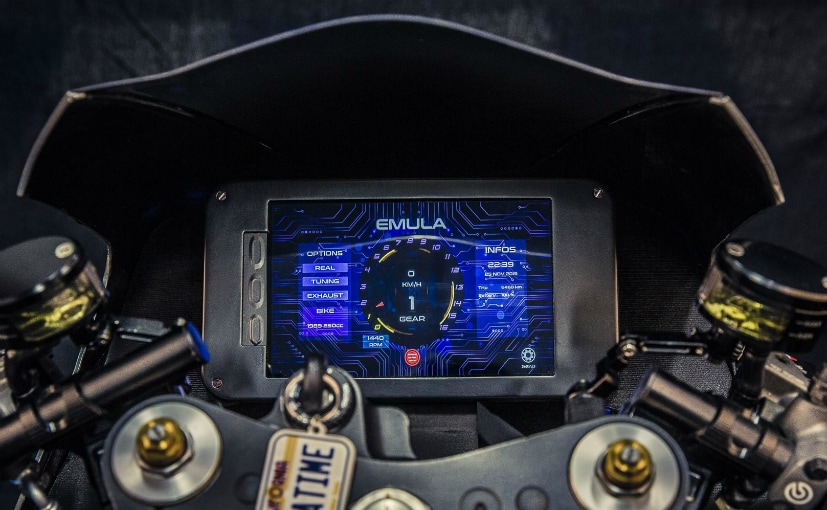 The 8-inch full-colour TFT touchscreen offers, what are different 'riding modes' if you will, but each mode emulating different engine architecture personalities. And there are four different sub-modes as well, which allow you to choose between Real Emulation, which allows almost real experience of an ICE motorcycle, Easy Emulation; which will not stall the bike even if you don't choose the right gear. In Arcade Emulation, the rider doesn't have to use the clutch lever, much like using a up/down quickshifter. In Beginner Emulation, the McFly system takes over gear selection, and the rider doesn't have to use the clutch lever, something similar to the Honda Africa Twin's dual-clutch transmission (DCT).

Check out the dyno test to see how it works:

The experience of an internal combustion engine is further improved with the Emula using speakers in the headstock to imitate induction roar and valve train noise, while speakers at the rear of the bike produce the equivalent of the exhaust note. Bass speakers create the appropriate vibration, based on which motor has been selected, as well as the engine speed. And for those who are also sensitive about contributing to noise pollution, the sounds can be routed to speakers in the helmet through Bluetooth in Silent-Fun mode. The McFly technology goes even further, with the software providing the rider optional performance enhancements, like with a real internal combustion engine, including the chance to enhance power delivery via a virtual high-flow air filter, different exhaust (think Arrow, or Akrapovic), and several other options. 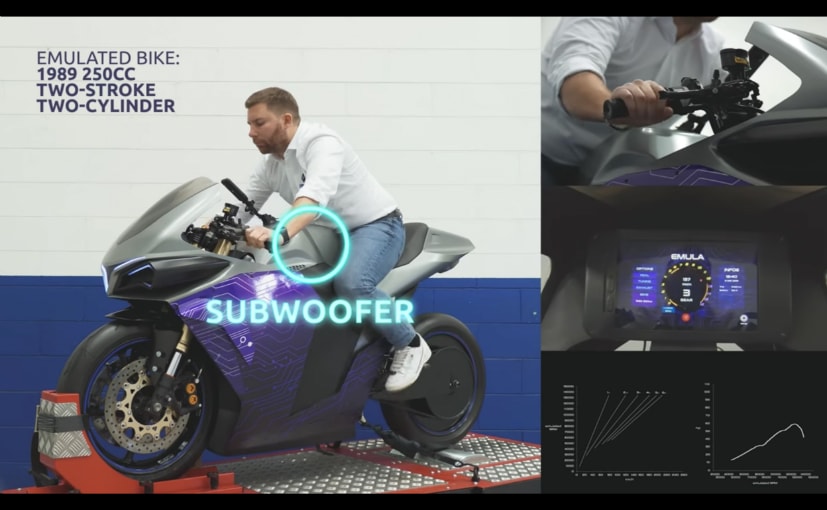 Emulating an internal combustion engine is not entirely new. Closer home, we have the Revolt RV400 which also has speakers which belt out sound akin to inernal combustion engines, but the Revolt RV400 does sound synthesised and not as close to a real engine as we would have liked. 2electron's McFly technology does sound like the real deal, and if it at all makes it to a production electric motorcycle, purists will no doubt be impressed. For now, 2electron doesn't intend to make the Emula a production model. The plan is to sell the technology to a major manufacturer, rather than build bikes. But from the possibilities the McFly technology offers, it may only be a matter of time before we see such a system on a future electric superbike.