Lewis Hamilton dominated the 2019 French GP winning the race with a margin of 18 seconds over teammate Valtteri Bottas. 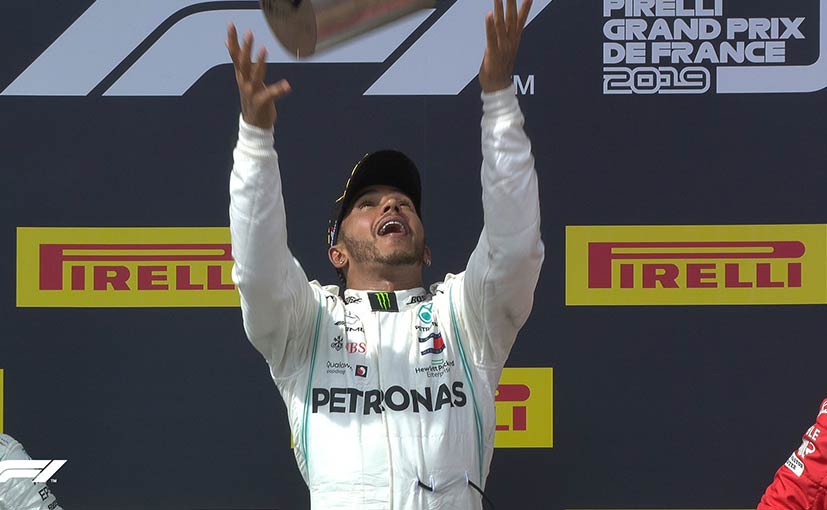 Mercedes driver Lewis Hamilton extended his lead in the championship with another win in the 2019 French Grand Prix. The British driver started on pole and absolutely dominated the race at the Paul Ricard circuit, while Valtteri Bottas finished a distant second, 18.056s off his teammate. Making a comeback on the podium was Ferrari's rookie driver Charles Leclerc taking third place after a disappointing few races. Hamilton now leads the championship by 36 points over Bottas, with the French GP being yet another 1-2 finish for Mercedes this season.

Hamilton led the race from the start and held the lead by a margin of a few seconds. However, as the other drivers started to put for new tyres, the Briton had the opportunity to build his lead. By Lap 23, Bottas, who was running second went into the pits, and was running 8 seconds behind his teammate. Hamilton pitted a lap later and the driver held on to his lead, ensuring they were far ahead since Ferrari's Sebastian Vettel stayed out longer. The former world champion though couldn't improve his ranking beyond fifth after starting seventh on the grid. However, he did bag an extra point for the fastest lap soon after changing tyres.

While the victory for Hamilton was hardly challenged, Bottas did face heat from Leclerc who was barely tenths of a second behind at the chequered flag. Leclerc too had to fend off attacks from Red Bull Racing's Max Verstappen on the last lap after the two drivers ran side-by-side into Turn 3. However, Leclerc edged clear soon after while Verstappen lost pace and concentrated on keeping Vettel at bay.

Finishing behind Vettel was Carlos Sainz Jr of McLaren in sixth place, as he passed teammate Lando Norris on the opening lap to take fifth. Norris ran behind his teammate in the early stages but soon started facing problems with his car's hydraulics, brakes and steering that got worse as the race progressed. He dropped to seventh by the last lap, but could not keep pace with Renault's Daniel Ricciardo, Kimi Raikkonen of Alfa Romeo and Nico Hulkenberg of Renault passing him.

Norris eventually settled for 10th picking up the final point of the race, ahead of Pierre Gasly of Red Bull Racing, followed by Sergio Perez and Lance Stroll of Racing Point. Torro Rosso drivers Daniil Kvyat and Alex Albon finished 14th and 15th respectively, followed by Antonio Giovinazzi of Alfa Romeo and Kevin Magnussen of Haas. Williams drivers George Russell and Robert Kubica were the final finishers of the French GP.