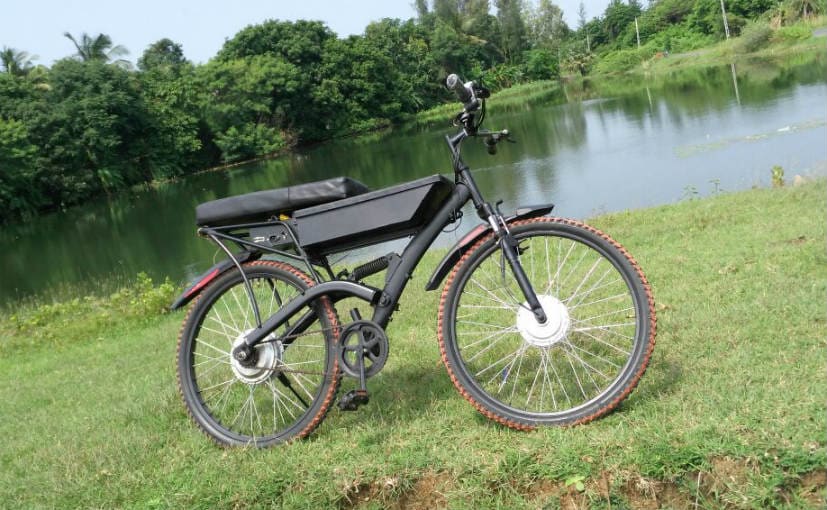 One of the first things we are taught in Physics is that energy is constant and can nether be created nor destroyed. And energy is what we need to move about from point to point, whether in the form of petrol and electric powered vehicles or your own two feet. The way you utilise energy can be the difference between how quickly and efficiently you get to a place and of course, in a world where energy needs are higher than ever and clean renewable energy is the calling of the day, there are bound to be a few good ideas.

The bicycle you see here might look like some sort of backyard project where someone has welded-in a box containing batteries and a motor, but the idea and concept behind it is important enough for us to sit up and take notice. In fact, this could easily be the future of cheap sustainable electric mobility for the masses and the idea behind it is so simple that we wonder why no one has thought of this before. The black box you see on the bicycle between the handlebar and the seat has two battery packs, each containing two lead-acid batteries. The hub on the front wheel has an electric motor and the one on the rear wheel has an ultra low-friction generator. Yes, this is a front wheel drive bicycle! Well, technically, if you use both electric and human power, it is an all-wheel-drive bicycle. But that is not why it is interesting. While one of the two battery packs power the 250watt motor on the front wheels, the 500watt generator on the rear recharges the second battery pack. And theoretically, this could result in unlimited range. But we do not live in a world where the rules of heat and physics do not apply so the range is limited as the batteries and the motor/generator both tend to heat up after a certain continuous usage cycle.

But the system actually works! While most commercially available electric scooters will give you a range of 50 odd kilometres, this electric bike actually gave us just over 30km on the first battery pack before we moved to the second one. And while we were riding on the second battery pack, the first pack was being charged up as we rode along the quaint costal roads of the Maharashtra-Gujrat border. If you really push it to its limits, this electric bicycle can give you a range of about 130kms, which is quite impressive. 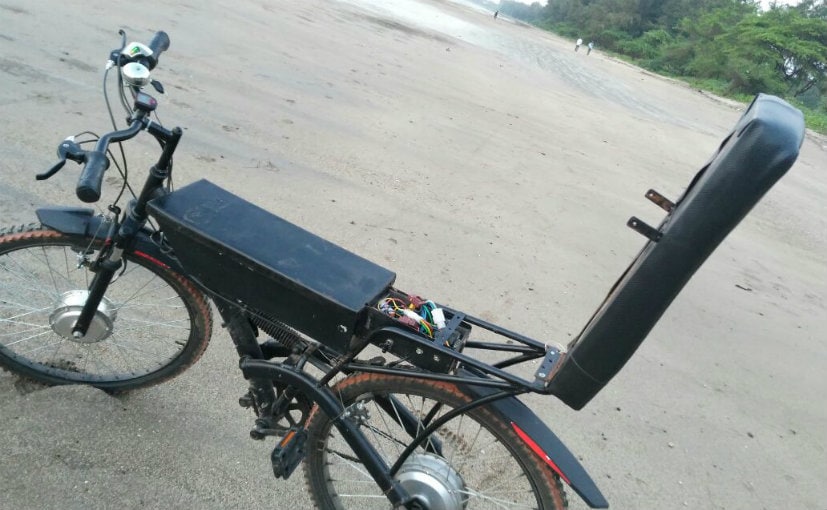 Just like in a normal electric scooter, there is a key to start the system up and a twist type throttle that propels the vehicle. The front wheel drive layout has literally no effect on the way this rides and if you are used to riding a bicycle or a motorised two-wheeler of some sort, you can easily ride this too. As we mentioned earlier, the current battery packs are lead-acid types but Punit Patel, the designer of this bicycle plans to move the concept to lithium-ion batteries and then eventually to super-capacitors to give even quicker charging, more range and more power.

But more powerful batteries isn't the only thing that Punit and his startup - Global Renergy intend to improve. The next step is to make a brand new scratch-built frame that can carry all the wiring and batteries inboard making the whole package much more compact, lighter and of course, more presentable to the public. As we mentioned earlier, the concept behind this bicycle is very simple and if the limitations of motor life and battery heat did not apply, this bicycle could technically go on and on forever making its own electric power.

In its current form, this rechargeable bicycle has cost Punit about Rs 2.5 lakh to build, which includes the cost of the generator, that he has designed himself. Although this seems expensive, small scale production would drive the costs down to about Rs 60,000 and imagine how much cheaper it could get if a large motorcycle or bicycle maker decided to put this into mass market production. This might just be a lowly bicycle with some batteries and a motor to some, but for us, this could easily be the future of mobility for India and the world. If you ask us, this is one of the best examples of 'Make in India' that we have seen so far.