Two friends made the plan to develop this project. Designer Ritsert Mans started developing the motorcycle while his friend, scientist Peter Mooji started growing algae to harvest it for oil. The motorcycle runs on fuel powered by algae oil and was taken out for its first test run on a beach. 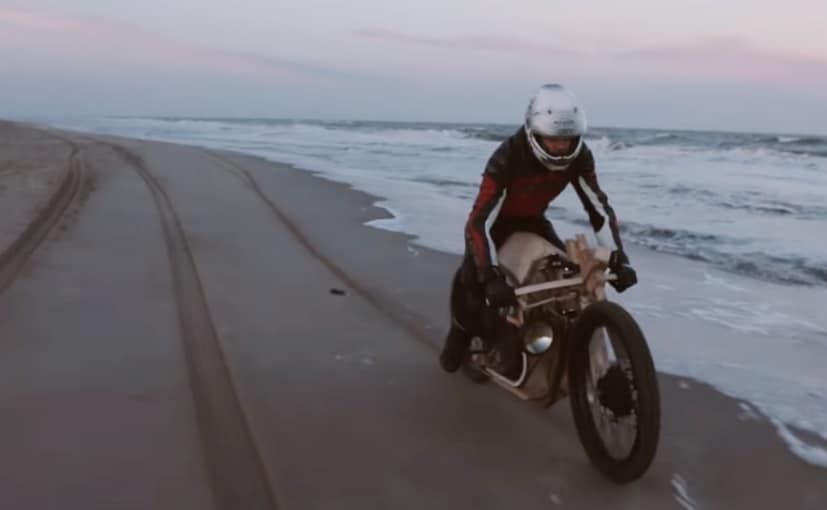 Two young men from Netherlands have built a motorcycle made of wood, and it's powered by an engine that runs on algae oil. Designer Ritsert Mans and scientist Peter Mooji started the development of the motorcycle as a project, to accompany Mooji's new book, titled "De Dikke Alg" or "The Thick Algae", which examines how algae could be used as fuel in a sustainable future. Mans developed the motorcycle while Mooji grew algae and harvested it for fuel. The chassis of the motorcycle is made of wood, as is the single-sided front end. Mans took out the motorcycle for its first test run on a beach.

This is not the first time algae oil has been used to fuel a motorcycle. In 2012, Scripps Institution of Oceanography alumnus Kristian Gustavson and team member Devin Chatterjie established the fastest (and only known) algae-fuelled motorcycle speed records at The Texas Mile land speed event in Beeville, Texas. Gustavson reached 94.6 mph (over 152 kmph) using a 50-50 blend of biodiesel derived from algae and cooking oil waste. Team member Chatterjie reached 96.2 mph (154 kmph) on 100 per cent algae-derived Green Crude diesel fuel supplied by Sapphire Energy Inc., one of the world's leaders in algae-based oil crude production.

What makes algae appealing as an alternative "green" fuel is that algae can be grown in salt water. And what also makes algae ideal is that it can be grown in non-arable land. While algae does burn carbon dioxide like fossil fuels, it also requires carbon dioxide to photosynthesise, making it carbon neutral. But currently, the development of algae oil is in a nascent stage, and it's three times as expensive as petroleum.