Much like the budget hatchback space in India, the sub-compact sedan segment isn't easy to crack. Despite earnest attempts by several carmakers, Maruti Suzuki Swift Dzire remains the undisputed king. As a matter of fact, the Swift Dzire still clocks-in more sales than that of other sub-compact sedans combined. One must know, no one except Maruti Suzuki has been able to amass sales numbers over 4 digits in this segment. In fact, the Indo-Japanese carmaker recently celebrated the 1 million sales of its sub-4 metre sedan. However, we must not forget that this space also fields products like the Honda Amaze, which still enjoys a decent user base. And yet, the sales of cars like the Hyundai Xcent and Tata Zest started falling soon after the initial hype surrounding these cars faded out.

The latest entrant in the segment - the Ford Figo Aspire - is banking on its great looks, several segment-first features, and a set of powerful engines to challenge the segment leader - Maruti Suzuki Swift Dzire. To find out if the Figo Aspire has what to takes to become a leading player in the sub-4 metre space, we took the diesel versions of both the cars for a spin.

Designing a sub-4 metre sedan isn't an easy task; the car must not only look good, but also offer a bigger boot than most hatchbacks and be able to accommodate 5 adults with ease. Compromise on either one of these three parameters, and there is a good chance the car will lose its sales. Alternatively, you need a dealership and service network like that of Maruti Suzuki India to be able to sell even an ugly looking car. 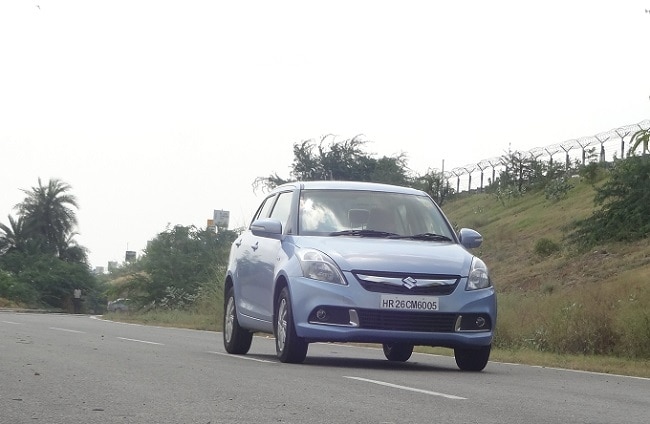 Most Maruti Swift Dzire owners would tell you that the sole reason behind their decision to purchase the car was not its looks, but the 'Maruti Suzuki' badge and an impressive after-sales network. Except for the new single-slat grille, the Dzire's front fascia looks quite similar to that of the Swift. Though the side profiles of both the cars look similar till the rear wheel arch, an out-of-sync boot design renders this otherwise good-looking car an ugly one. The rear profile is also quite plain and unimaginative. Now, the Ford Figo Aspire - it is probably the best-looking car in its segment, followed by the Honda Amaze. I must give credit where credit is due; Ford's design team has done a marvelous job making a proper three-box sedan in the sub-4 metre segment. Up front is Ford's new signature hexagonal grille with four horizontal chrome slats and a slim chrome lining. Other interesting elements are the sweptback head-lamps, plastic surrounded fog-lamps, and prominent lines on both sides of the bonnet. While the front fascia is quite aggressive, the side profile is decent, if not sporty, thanks to its sloping roofline and prominent shoulder line running through the door handles. Though the side profile of the Aspire may not look as good as the Amaze, it is certainly better and more proportioned than that of the Swift Dzire's. 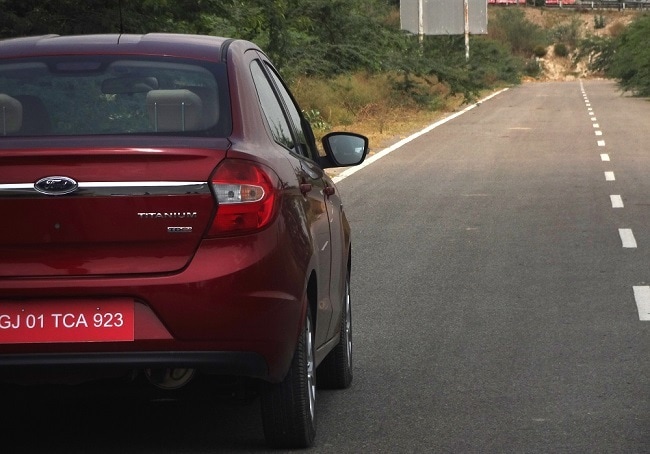 Coming to the rear profile, it looks simple with the rounded-off bumper with black plastic cladding at the lower lip, single-piece D-shaped tail-lamps and a thick chrome strip that runs across the width of the Aspire. I will have you know that the Aspire's short rear makes it looks disproportionate and more like a hatchback - quite like most sub-4 metre sedans.

Several studies show that today price and fuel-economy aren't the only deciding factors involved in the purchase of a new car; cabin comfort and features have also become equally important - which is also why Hyundai has observed much success in the last one decade.

I'll start off with the Maruti Suzuki Swift Dzire - it offers an extremely comfortable cabin for both, driver and passengers. The well-cushioned and soft seats were an absolute delight; in fact I would go so far as to say that no other car in this segment offers such comfortable seats. The interior quality is top-notch too, and with dual-tone dashboard and features like the engine-start stop button and the new infotainment system, the Dzire looks more contemporary than ever. 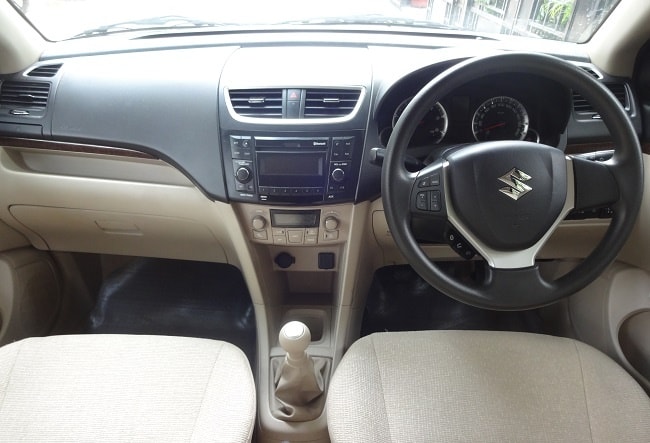 Moving on, the Figo Aspire's cabin feels familiar, perhaps because of the fact that the steering wheel, infotainment system and controls have been borrowed from the EcoSport. The vehicle's dual-tone colour theme ( charcoal black+ light oak) gives the cabin an airy feel, but the fit & finish is definitely not as good as good as the Dzire or even the Xcent for that matter. The quality of plastic, though acceptable, is no match to the Dzire's cabin. Nonetheless, the Aspire scores brownie points for its many cubbyholes, and the legroom in the rear row, which makes it a comparatively more practical car for both, the city and the highway. That said, the seats could have been slightly more comfortable. Though the Ford Figo Aspire misses out on the start-stop button, unlike the Hyundai Xcent and Swift Dzire, the top-of-the-line variant gets 6 airbags and leather seats. Interestingly, both these provisions are a segment-first. Also, with a boot space of 359-litre, the Figo Aspire offers about 40-litres of more space.

Long story short, though the Swift Dzire has the edge in terms of cabin comfort, and fit & finish, the Figo Aspire scores well for its features and space.

Now the most important bit - performance. Before we delve into details, I will have you know it is a hands-down victory for the Figo Aspire diesel, and not just against the Swift Dzire, but against all its competitors. The Ford Figo Aspire features the same 1.5-litre TDCi unit that powers the Fiesta and EcoSport, but with a tuned ECU and fixed-geometry turbocharger for more power and torque.

While this motor puts out 90bhp and 204Nm of peak torque in the EcoSport and Fiesta, it has been tweaked to develop 98bhp and 215Nm in the Aspire. Despite having an old-school 8 valve SOHC (single overhead camshaft) valvetrain, unlike the Swift Dzire's 16 valve DOHC (double overhead camshaft), the Figo Aspire is far more fun to drive. With segment-leading performance numbers, the Aspire offers healthy torque at even low RPMs - an occurence not observed in any other car in the segment. With linear power delivery and almost no turbo-lag, the engine is never out of breath - put the pedal to the metal at any point and you shall be supplied with enough power. Though the engine is prone to getting noisy above 3500rpm, it's quite refined below that. Then there's also the fantastic cabin insulation that makes it one of the quietest cars in its league. 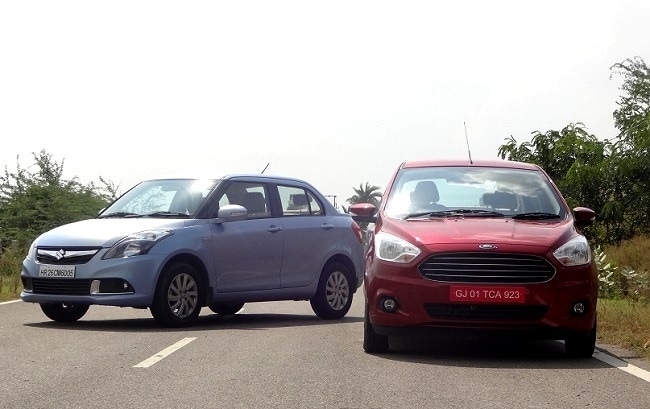 The gearbox, however, has a rubbery effect, and it may take some time to get used to - especially if you have been driving a Maruti or a Hyundai. With adequate throttle response at low RPMs and linear power delivery, you won't have to downshift very often on city roads. It fares even better on highways. The Aspire diesel further surpasses its rivals as it crosses the 140Km/h mark with utmost ease. On the other hand, the Swift Dzire's 1.3-litre multijet unit seemed to struggle a little. The Aspire diesel is really fast in straight lines, and with its sublime mid-range performance overtaking seems like cakewalk.

The Maruti Suzuki Swift Dzire diesel features the Fiat-sourced 1.3-litre multijet unit that is good for 74bhp and 190Nm. Though it is not as fast and fun as the Figo Aspire, the Dzire performs sufficiently on city roads and highways. Much like other multijet-powered cars, there is significant turbo-lag below 2000rpm, which leads to frequent gearshifting, especially in the city. Anyhow, there's ample power beyond the 2000rpm mark, and performs well in the mid-range. While overtaking in the Dzire isn't half as much fun, the ride comfort, easy gearshift and a well insulated cabin work in its favour.

Both the cars score well in the ride and handling department as they handle all sorts of bumps and undulations without any problem. While the Swift Dzire's suspension offers greater comfort on city speeds, the Aspire is marginally better on highways. Though the Figo Aspire does its job really well for most parts, its softer suspension setup and light steering may cause enthusiasts to miss the stability of old Ford cars - especially on open roads. Additionally, the Aspire also experiences body-roll around corners, thus leading the driver to feel disappointed with the 14-inchers. And yet, the Aspire still feels more planted than the Dzire.

Suffice it to say the Swift Dzire outclasses the Aspire as far as ride quality and cabin comfort are concerned. However, with the most powerful and capable engine in its league, several first and best-in-class features and a spacious cabin to boot, the Ford Figo Aspire is undoubtedly a better product than the Maruti Suzuki Swift Dzire.