With an exterior length of 4150mm and a width of 2150 mm, it stands tall on the 22 inch wheels which clearly distinguish the Audi AI:Trail is an off-roader. With a ground clearance of an impressive 343 mm it can ford through water more than half a meter deep. 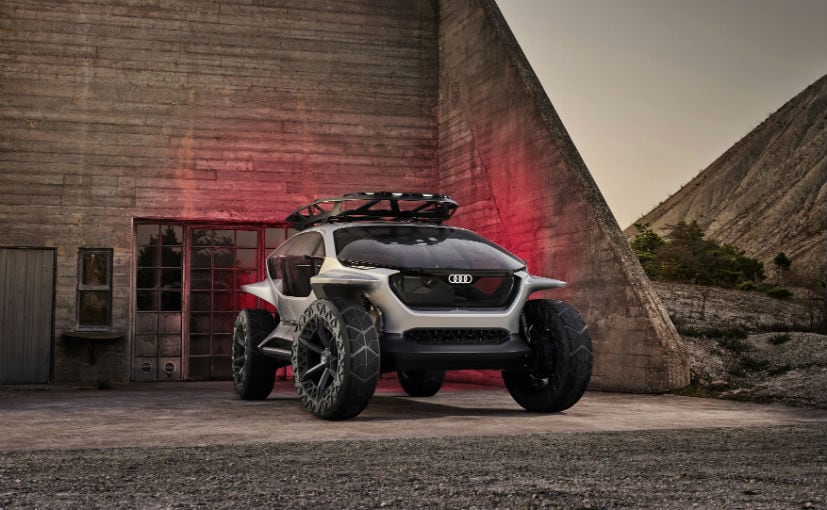 Audi is completing its quartet of visionary vehicles and will be at 2019 Frankfurt Motor Show and it's showcased an electric off-roader for the future. The company calls it the AI: Trail. The four-seater Audi AI:Trail quattro combines the capacity for automated driving with off-road capabilities. The glass surrounding the cabin extends all the way to ground level, providing all-round visibility. The battery capacity also ensures sufficient range even away from dense networks of charging stations. 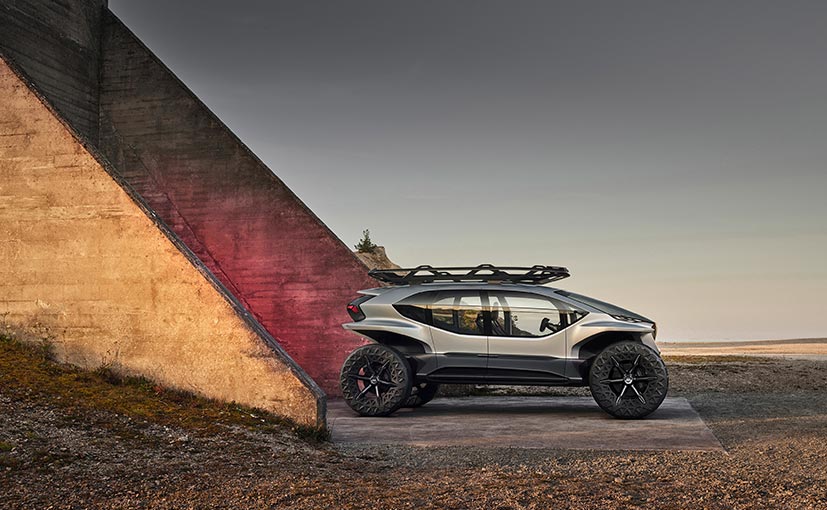 With an exterior length of 4150mm and a width of 2150 mm, it stands tall on the 22 inch wheels which clearly distinguish it as an off-roader. With a ground clearance of an impressive 343 mm it can ford through water more than half a meter deep. On rough, rocky terrain, this architecture provides plenty of agility without the battery unit integrated in the floor coming into contact with the ground. 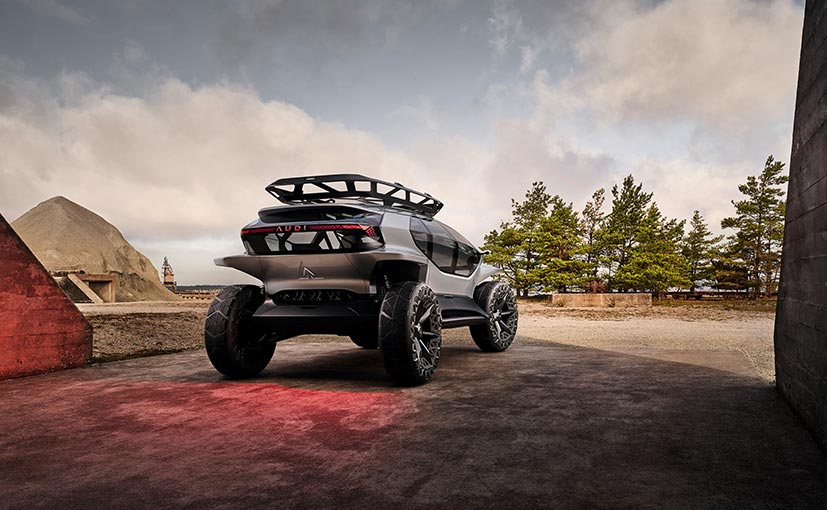 The AI:Trail concept gets a massive 343 mm ground clearance and has water wading capabilities up to half a meter

The cabin itself sees space for four people and it gets the protruding ridge halfway up the side windows, which we've seen in concepts like the AI:ME and even the Aicon. This line continues to both the front and rear and acts as a waistline uniting the entire body in one monolithic whole. With the electric drive system arranged around the axles and the battery in the floor, there is no need for overhanging sections or separate attachments for the motor or batteries.

Light weight and maximum body stiffness are what off-roaders need and the Audi AI:Trail is made of a mixture of high-tech steel, aluminium and carbon fiber. As a result, it weighs just 1,750 kilograms, despite its high-capacity battery. 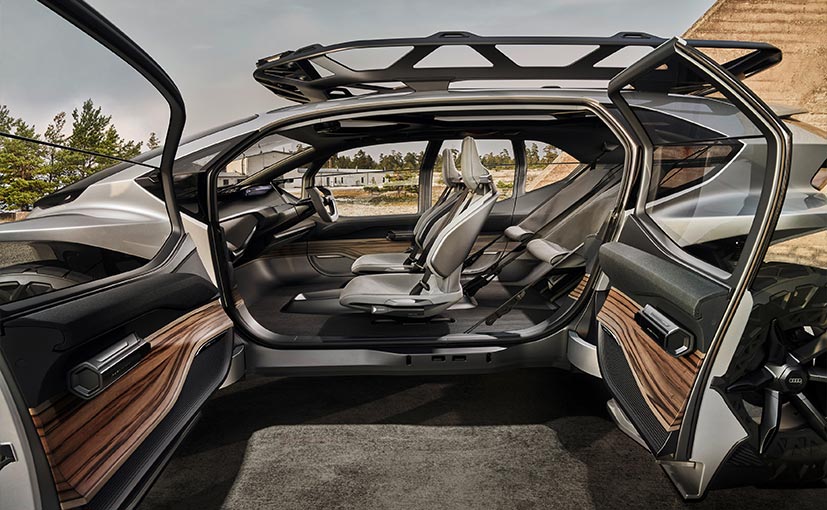 In the cabin, the side window ridges give passengers space where they objectively need it the most-around their shoulders and elbows. They also provide extra space where they subjectively perceive it most acutely, as the way in which the side windows extend down low opens up a clear down to the ground, even between the wheels. The aim of the designers here was to give those inside the vehicle the best possible view of nature and their surroundings, breaking the boundaries between the interior and the world outside. When the car is moving, the occupants' gaze is not merely focused on the terrain ahead but is free to wander and happen upon little details in the open spaces around them. In the AI:Trail, passengers can relax without even having to think about it.

The windshield wraps around the front of the vehicle, give the passengers a clear view of what's on the ground and on the front and sides. Almost the entire roof, from the top of the windshield to the rear spoiler, allows a clear view of the sky and the landscape. Even the vertical Singleframe is glazed, with only the four rings of the badge sitting in their customary position in what is otherwise a glass octagon. 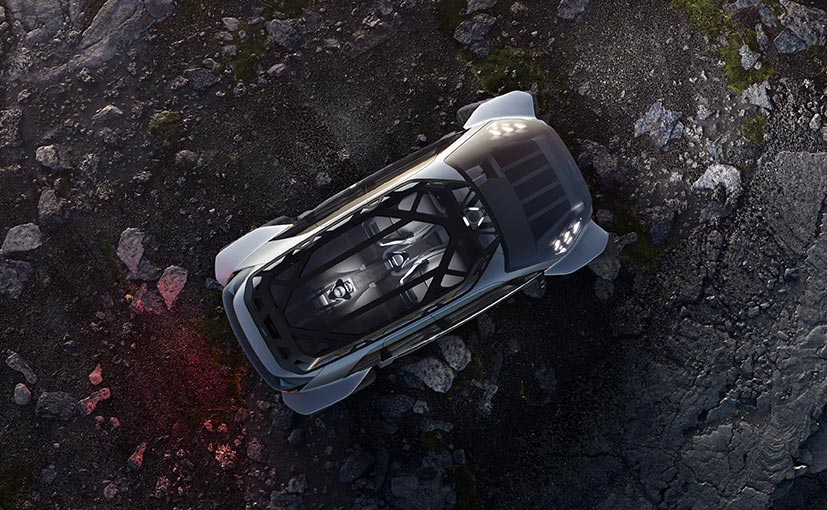 Almost the entire roof allows a clear view of the sky and the landscape on the Audi AI:Trail concept

Both the windshield and the tailgate open wide, providing easy access to large storage compartments with straps to keep luggage secure in transit. Integrated in the bumper at the rear is another separate compartment for dirty items such as hiking boots, climbing gear or wet clothing.

Up front, instead of conventional headlights, self-contained light sources sit below the A-pillars and can shine both outward and inward. These LED elements are dimmable and adjustable and can be used as interior lighting as well as for lighting the vehicle's path. The rear light operates in a similar way. Extending across the full width of the rear section, this element can be used to illuminate the luggage compartment and as distinctive signature lighting for the exterior. 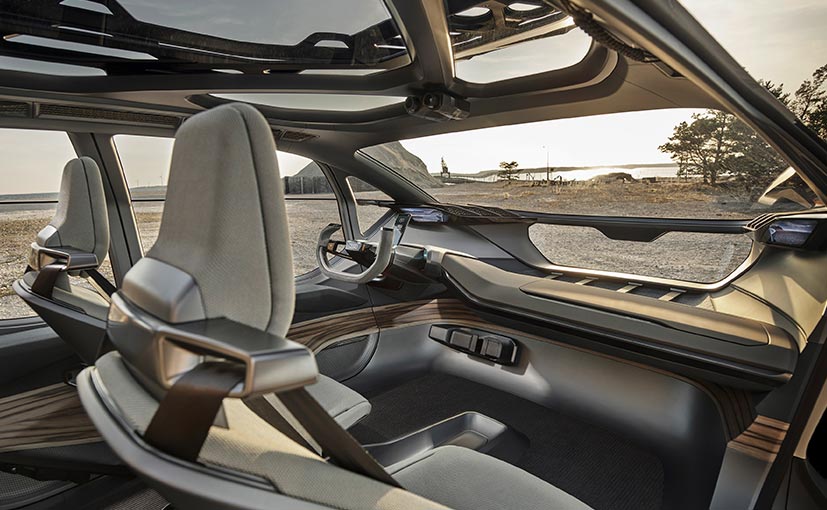 Both the windshield and tailgate open to provide easy access to storage space on the AI:Trail concept

Instead of conventional low beams and high beams, the Audi AI:Trail is equipped with a total of five rotorless, triangular, electrically operated drones with integrated matrix LED elements. They are capable of landing on a roof rack or directly on the roof of the vehicle, and docking onto the inductive charging elements.

The flying objects are Audi Light Pathfinders, which generate their lift in the same way as bladeless fans produce their air flow. Thanks to their markedly lightweight design, they can fly ahead of the AI:Trail, consuming comparably little energy in the process, and illuminate the path ahead, thereby replacing headlights entirely. If desired, the on-board cameras generate a video image that can be transmitted to the display in front of the driver via Wi-Fi, turning the Pathfinders into eyes in the sky. 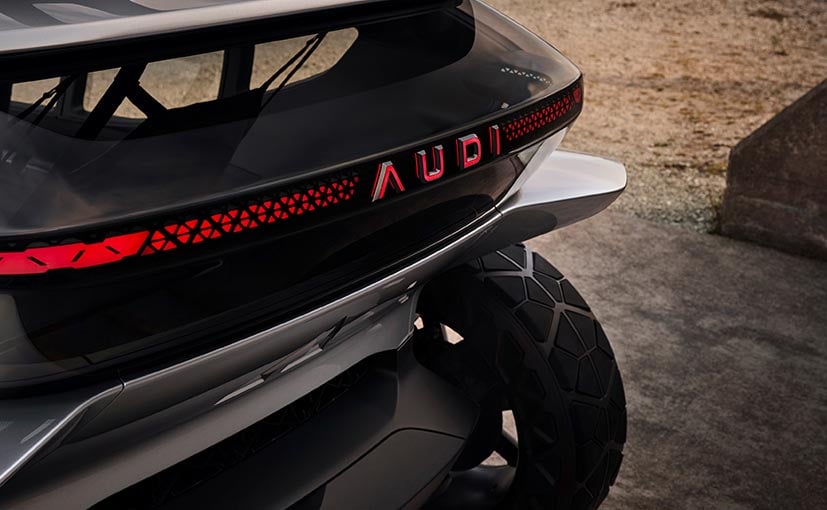 The autonomous driving tech works with a host of optical systems such as cameras and lasers, as well as with ultrasound and radar

When the AI:Trail is stationary, the drones can also illuminate the surrounding area from their position. The drones, which are coordinated fully automatically by the AI:TRAIL, usually fly at least in pairs. If necessary, they can also provide additional light intensity or illuminate the area around the vehicle by coming together to form groups of up to five drones. The occupants can simply use control software on their smartphones to set their desired scenario.

The Audi AI:Trail is designed for driving on roads up to level 4 of autonomy. But the sensors and assist systems don't leave the driver of the AI:Trail alone, even off-road. There is the tried and tested sensor system for the ESP on board, of course. The data for friction values and slip, longitudinal and lateral acceleration provide the electronics with all necessary parameters they need in order to optimize drive stability. There is also a whole range of sensors that can detect both the road surface and obstacles; they work with optical systems such as cameras and lasers, as well as with ultrasound and radar. The data that they provide enables the central driver assistance system to avoid collisions by intervening with the steering and braking as needed. 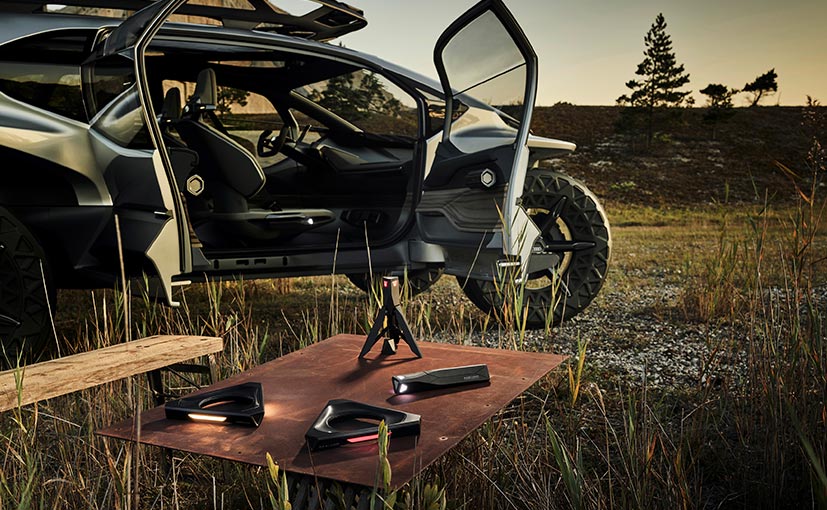 The Audi AI:Trail Concept promises a range of 400-500 km on road or easy off-road terrain

Given that the AI:Trail is intended for use in areas without charging infrastructure, the thing it really needs is range. The stated target with its lithium-ion battery is 400 to 500 kilometers on roads or easy off-road terrain. On rough ground, where the almost constantly elevated wheel slip alone means that energy consumption is higher, the limit is still 250 km.

In order to meet these requirements, the vehicle is designed to reach a maximum speed of 130 kmph on the road. The vehicle electronics continuously monitor the energy flow and consumption, thereby ensuring maximum economy even during off-road drivingThe Audi AI:Trail is equipped with four electric motors installed near the wheels, each of which propels one wheel directly. Yes, it gets the quattro all-wheel drive system. The maximum system output is 320 kilowatts and the maximum torque is 1,000 Nm

Audi RS5 Coupe
₹ 1.11 Crore *
View More
Subscribe to Our Newsletter
Over 1.5+ Lakhs subscribers
Thank you for Subscribing to Us