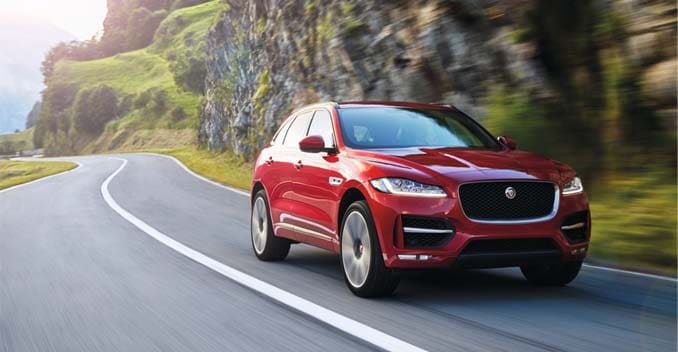 Ian Callum who heads design for Jaguar had told me this when we last met in New York in April - "I never thought I would ever design a Jaguar SUV, but here we are!" And that pretty much sums it up. Times are changing, and success in the auto business means different things now. Having an SUV or Crossover in your portfolio is now key to some of that success. Jaguar understands it and despite having Land Rover, JLR management green lighted the SUV project too. The CX-17 concept shown at the 2013 Frankfurt Motor Show is now the F-Pace, making its global debut at the 2015 Frankfurt Show.

The F-Pace will take on the likes of the Audi Q5 and Porsche Macan - both benchmark vehicles for Jaguar when developing the F-Pace by the way. The Macan for its performance prowess and the Q5 for its popularity and large volume sales globally. So has Jaguar been able to pull it off? Well I cannot truly answer that question until I drive the car - and that won't be happening for some days still. But what I can tell you is that having spent time at Jaguar's technical briefings on the F-Pace (and seeing the car in the flesh), I do now want to drive it. Desperately so!

The F-Pace is sexy, sporty and manages to exude Jaguar-ness despite being exactly the opposite of what Jaguar cars have always been - low slung, aerodynamic designs. But the F-Pace manages to look the part, and you can thank Ian Callum for that. The obvious Jaguar family design cues (front grille, headlamps, bulge in bonnet) and the deliberate lifts from the F-Type (shoulder line and crease, taillights) make the F-Pace a Jaguar all right.

Callum says he has captured the F-Type and given it an SUV expression with the F-Pace. Given the competition this car has, I think it looks very pretty and will surely stand out in the crowded segment. The roofline implies speed, and the wheels are pushed out creating very short overhangs and a long wheelbase (2874 mm), which is the longest in its class.

The F-Pace uses the most aluminium of any Jaguar to date. The car is built on JLR's new aluminium architecture and is the third new product using it (after the XE and new XF). 80% of the car's body structure is made of aluminium making it one of the stiffest cars in the segment. Interestingly 33% of all the aluminium used in the car is recycled aluminium. The stiff chassis is complemented by a sports car suspension. Lateral stiffness in the front is 50% greater than the Macan's. At the rear it is 35% stiffer. That is saying something, isn't it?

The F-Pace uses adaptive dynamics that includes passive damping. This also implies that despite its sporty character and performance, the F-Pace does not lose sight of comfort. Jaguar promises better ride comfort than the rivals, with the ability to swallow many potholes and undulations. Now that is certainly good news for future Indian buyers, eh? The car also has the AWD (all-wheel-drive) option - and Jaguar says that this is an intelligent AWD system. That means that unlike usual all-time AWD systems the F-Pace has a rear-wheel bias in normal everyday driving conditions. but sends more torque to the front when the driver demands sportier performance. 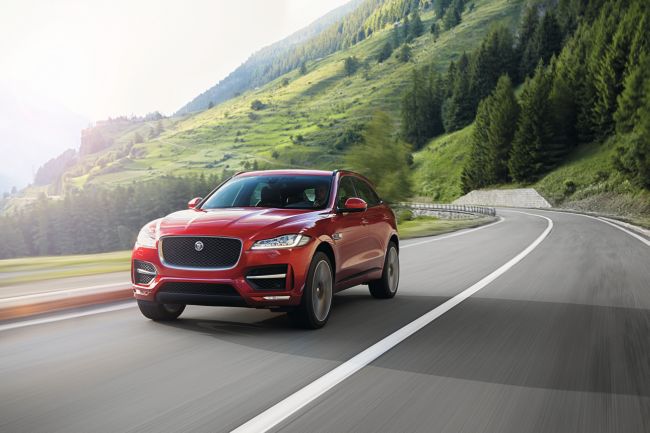 But what is new here are the Low Friction Launch and Jaguar Drive Control. This includes an adaptive surface response system that has 3 terrain modes. And yes you guessed correctly - this is very similar to Land Rover's Terrain Response system, only with fewer extreme condition settings. The car has 12 active safety systems, a new 4-colour laser head-up display, and a 12.3" TFT screen virtual instrument cluster that has a customisable display. You can also opt for a full screen view of the navigation map - just like the virtual cluster of the new Audi TT.

And finally I want to mention that the F-Pace comes loaded with connectivity and infotainment options. The list is endless, and you can customise and connect any screen to any device you can think of! There is a large touchscreen display in the central console, and enough USB and other ports and sockets to keep all passengers happy. The car can also be controlled through a smartphone app (to lock/unlock or turn on the aircon) and can also work through an Apple iWatch app. An innovation from Jaguar is the wearable Activity Key - a waterproof wristband that allows you to indulge in outdoor physical activities without worrying about carrying your keys. So the keys stay in the car, and the Activity Key allows you to lock and unlock the car. So surf, cycle or run and don't worry about the heavy key fob falling out or jingling in your pocket. Jaguar says it has taken care to provide comfortable second row seating. Rear AC vents, a 125mm wider cabin than the Q5's and seats that sit 10mm higher than the ones in the front give you a greater sense of space. A split panoramic style sunroof helps, and oh yes before I forget the rear seats are also electrically reclinable! So there is plenty here to impress the gadget or comfort seeking buyer.