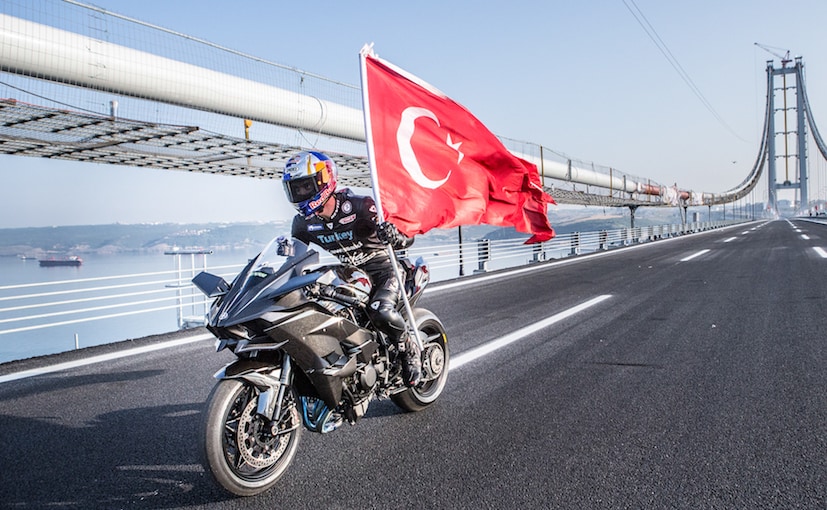 For all good that can happen to motorcycles, the  supercharged Kawasaki Ninja H2R was unveiled in 2014 boasting of 300 horses under its belly, while its closest rivals are still in the vicinity of 200. While that jaw-dropping power was enough to have smitten this writer, it would take cojones the size of wrecking balls to actually attempt to hit the top whack on the green monster. So, did someone dare to do the devil's deed? Well, the answer is yes and it has been Turkish rider Kenan Sofuoglu, who can now claim to hit the top speed of 400 kmph on the Ninja H2R.

Commenting on the achievement, Kenan Sofuoglu said, "When I asked for the motorcycle, Kawasaki said its maximum speed was 380 km/h and that their dream was to reach 400km/h. The first time I rode it, I felt its huge power and speed, and I made small changes to the motorcycle - keeping its original settings - and did not modify it. I reached 390 km/h in my last trials and today I beat this and reached 400 km/h."


Sponsored by Kawasaki, Kenan Sofuoglu is a pro motorcycle racer in the World Supersport (WorldSSP) series and clearly is the right man for the job, credited for being the most successful WorldSSP rider of all time having won four championship titles.  To give you perspective, the top speed in world championship races is 300 kmph.

Not for the faint hearted, the top speed run required extensive preparation right from getting the most accurate weather conditions to finding the right road to achieving the top speed run. Sofuoglu prepared for the feat for over four months with multiple practice runs, while the yet to be opened 8799-feet long Osman Gazi Bridge in his home country served as the playground. The speedometer indicated 400 kmph top speed was achieved in 26 seconds.

0 Comments
Multiple practice sessions determined that an early morning run would be highly advisable for the top speed record that led to the attempt being rescheduled at 5am. The Kawasaki Ninja H2R was also adjusted to meet Sofuoglu's needs; albeit, while keeping the bike settings stock. A special leather suit was also made for the record attempt. In a bid to avoid tyre blowout, the top speed had to be reached in less than 30 seconds.