SRK's Convertible Ride With AbRam Is Adorable, But Potentially Dangerous Too 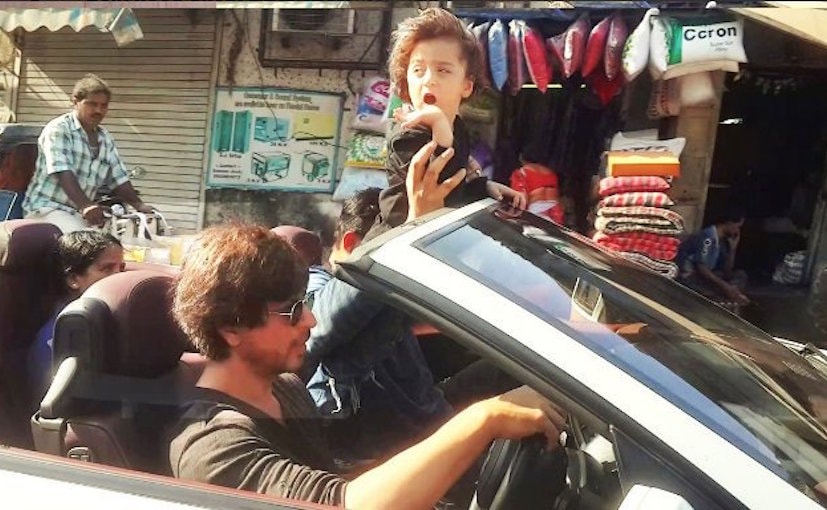 First, let us be clear that we are not trying to go after a father enjoying a precious moment with his child. This is also not about targeting Shah Rukh Khan because he is a celebrity. The adoration and love the internet has for Mr Khan's son AbRam only brings more attention to the much needed road safety reforms our country needs. It must serve a larger purpose then to highlight the lack of awareness when it comes to child safety in particular. Recently a video of the actor driving his toddler son in his convertible went viral and broke the internet. And we are not trying to play spoilsport on what was an adorable video. But the part that no one is talking about is the fact that AbRam, or any child his age should be safely in the back seat or at the very least strapped into a child seat at all times. Global in-car safety standards dictate that children under 12 years of age (varies by country) must be seated in the rear of a vehicle and never in the front passenger seat. And all occupants - children and adults must be belted up and not be standing/moving around in a moving vehicle. However in the said video - as harmless as it may seem - we see the toddler in the front seat and also being held up to stick out of the convertible itself. Yes its cute, yes it's probably fun and yes it's innocent. It is sadly also extremely dangerous.

The front seats of the car aren't designed for a child, and nor is any safety equipment that is built around it. This includes side impact protection, airbags and even the seatbelts. There are all kinds of certified child seats that are front or rear facing - taller and shorter models - that can afford not just comfort but also a great view of the road for young riders. Not everyone is aware, or can afford such equipment in a country like ours - this is something we accept. But that is where it would be terrific for people who have huge following to send out the right message - stand for what is correct, safe and not something that could be seen as reckless. Is what we see in the video against the law? The existing law - no. Well to be clear the law is ambiguous though a notification issued by the Indian government in 2015 does state that children below the age of 12 years need to be seated in appropriate child seats to protect them from injury in case of a collision. But this is not enforceable and is also a matter that can be interpreted differently by various state laws. So the idea is not to deem this particular drive illegal. You may also argue that Shah Rukh Khan was driving at a relatively low speed, and also had a police escort - and that it was harmless fun. Sadly that doesn't take away the threat a child can face in such situations as other reckless/faster vehicles could also be involved in a potential incident. The fact that celebrities are hounded by the paparazzi (who may also cause a distraction or dangerous situation) must also be noted. So why wait for an incident to happen before we recognize what should be the right thing to do? And in the case of a celebrity - to also project?

We've had many tragic incidents with children, involving sunroofs or convertibles in the past. Just last year on independence day we read the story of unfortunate incidents involving children and sunroofs too. Senseless deaths that could have been avoided by simply doing the right thing. It is our responsibility to spread the word and encourage awareness. And any celebrity that endorses and adopts these habits will just give a shot in the arm to that kind of message being dispersed quicker and wider.

We are very encouraged by the fact that India will move to stricter norms for passenger vehicle safety over the next 3 years. Some like market leader Maruti Suzuki have taken a lead and have begun to implement safety in the design of its cars ahead of the deadlines. And the premium cars like the 6 Series convertible SRK was driving, already boasts the safety equipment and world class crash worthiness. But none of that equipment would help if people aren't correctly buckled up in their cars. So it is good news that many manufacturers are also offering ISOFIX child safety restraints which allow child seats to be correctly anchored into a rear seat. Here's hoping for stricter regulation, enforcement of that regulation, and simply - more people adopting what is quite simply - the right thing. Knowing what a stickler SRK is for the law, and doing what is right, we are sure we can count on him for championing the cause of child safety and road safety too.