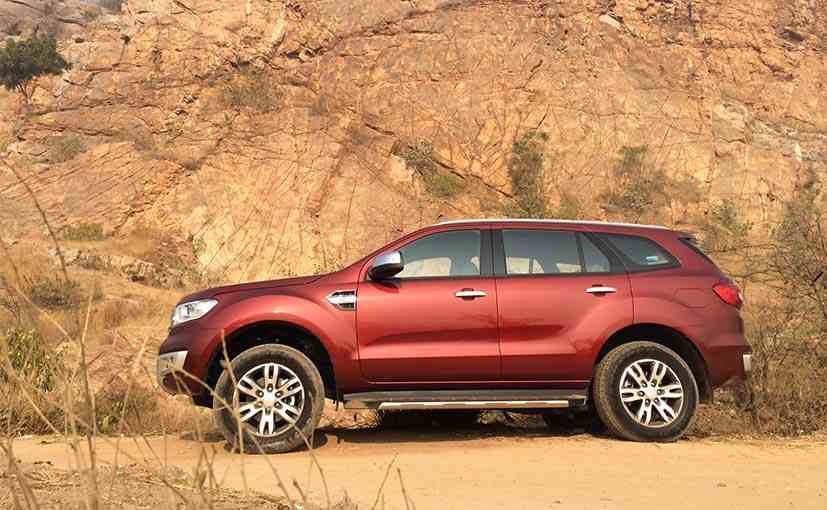 The very first Ford Endeavour we got in 2003 was everything the market lacked - a big old pickup truck style SUV. Traditional and all American - the car stood out and stood tall in the meagre SUV category at the time. By the very long time it's taken Ford to bring a new generation the entire picture has altered. And how.

Our first drive on the new generation Endeavour - also known as Everest in the south East Asian market - in September last year. At the time we told you what promise the car seemed to hold with contexts to India. Ford seemed to have gone after specific areas of improvement and also kept a clear focus on what customers today demand.

The car is now here and ready for launch and I can say that is indeed the case on the Indian version too. And yes it will take on the Toyota Fortuner as its main rival. We are not privy to how much better the 2nd generation Fortuner will be when it arrives, but I think that Ford is playing it smart by launching the car at the start of the year, as it will get a few months of a free run before that next Fortuner arrives. 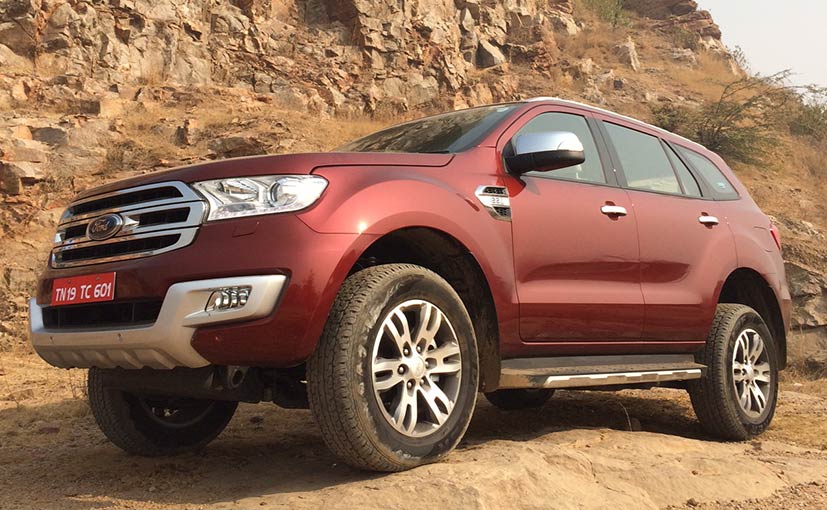 There are two engine variants on offer on the Endy - the 3.2 and 2.2 litre Duratorq. Ford will use the TDCi badging also in India to designate the common rail attribute clearly. There will be just two trims - Trend and Titanium in multiple combinations: The 2.2 TDCi is available in Trend 2WD/4WD manual or 2WD automatic and Titanium 2WD automatic. The 3.2 TDCi is only available in 4WD automatic in Trend or Titanium avatars. The 2.2 litre TDCi has 157 bhp, which kicks in at a reasonable 3200 rpm. Torque is great at 385 Nm. The manual gearbox is a 6 speed, and so is the AT - which is the 6R80 autobox from the new generation of Ford's F-Series pickups in the US. I have to say that the automatic is very good, and allows that huge torque to travel quickly to the wheels. The gearbox is also self-learning if you will, meaning it starts to adapt to your driving style, and alters its performance to provide optimal power and torque. And for the most part I found that to be true, as the car did start to feel better as I went. Unless it was simply growing on me, and I was adapting to it, rather than the other way around! The lack of paddles though is the sore thumb for me. 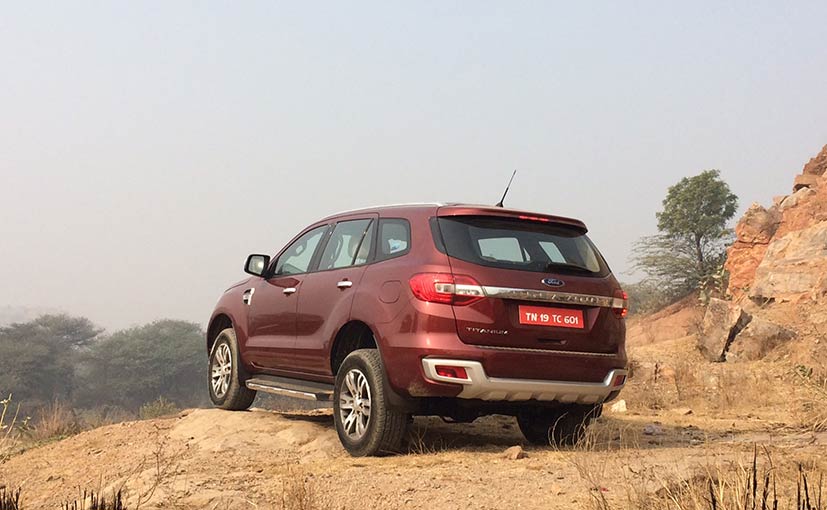 On the whole the 2.2 is not a beast, but feels adequate. I think there are two factors here that helped it to make a good impression with me - first the fact that the new Endeavour handles way way better than the last, and second that I drove it before I drove the 3.2 TDCi! Before I get to that second engine, a word on the handling and overall ride feel then. This car comes as close as you can get to a monocoque without being one! Roll is much lower than the predecessor's and the suspension swallows mostly anything. There is a fair amount of wheel travel and the 225mm ground clearance serves you well, especially when you put the car off the road. It does come through as a good off-roader, and yes I did test the 2WD version too - which also managed to get out of some sticky situations with aplomb.

The 4WD is a la Land Rover, with a dial that allows you to switch the car's character to respond to varying surfaces. This Terrain Management System has Rock, Snow/Mud and Sand modes, and works easily. I confess I didn't come across any snow, but did try it out on loose gravel, sand and wet surfaces. There is a display on the dash that shows you pitch and roll, so you know what's happening with the car at all times, when not on the road. The Endeavour gets going, oblivious of its massive bulk, and I have to say this car is so much better engineered than the last. The last one was the Hulk. This one is more Marvel's Avengers - the agility of Captain America, the flexibility of Black Widow, the sharp metal of Iron Man and the grunt of the Hulk of course! Now if it also had Thor's hammer it would be a Volvo wouldn't it?

The 3.2 litre powerplant is obviously the one you really want. It is a different character instantly, and you're immediately aware of the massive power at hand. The massive 196 bhp is evident - but the truth is that it is more exciting and roars very nicely at lower rpms. Try and push it past 4500 rpm and the roar starts to whimper a tad. I didn't find that kind of flagging feel on the 2.2 to be honest. But the 3.2 is faster, punchier and definitely more fun - since none of us wants to really go the fastest in a straight line in a car like this. The Endeavour is definitely a true sports utility and for that the engine does the job. The 3.2 is only available with the automatic though - so if it is a manual you are after, make do with the smaller engine. And in fact therein lies Ford's strategy I think - an aggressive sticker price on the 2.2 Trend manual to take the fight to the Fortuner, and a fully loaded - all bells and whistles 3.2 Titanium auto at the top - which can hold its own against the more luxurious Santa Fe. 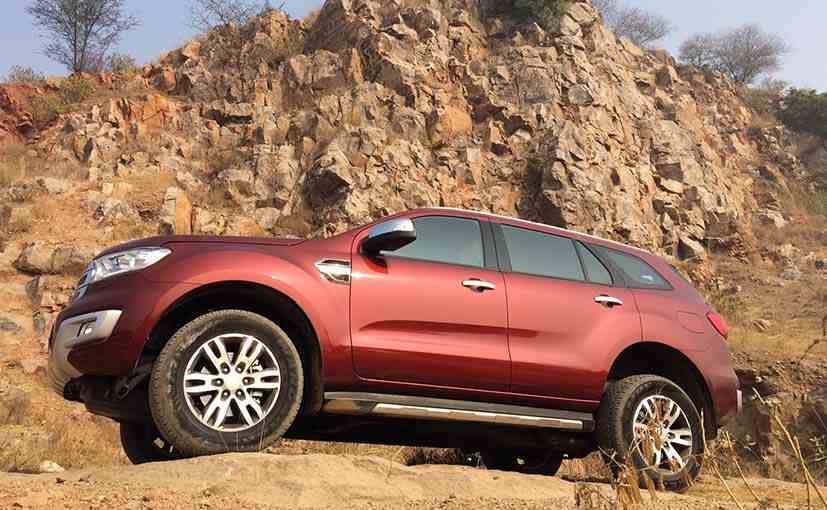 The fact that the Endeavour isn't trying to be pretty, but still looks good will also help that case. Unlike other SUVs who are all trying to be George Clooney in rugged jeans, the Endeavour is happy being Dwayne Johnson or perhaps a more flattering Channing Tatum. It is well appointed, with the leather and the gadgets, and yet gives you plenty of grunt and has the bulk to stand really tall in the crop of SUVs. I especially like the leather-stitched dash - very nice touch! It also has active noise cancellation - a system that uses microphones inside the cabin to detect the levels of noise coming from outside, and actually feeds opposing sound back into the cabin to cancel the excess sound. 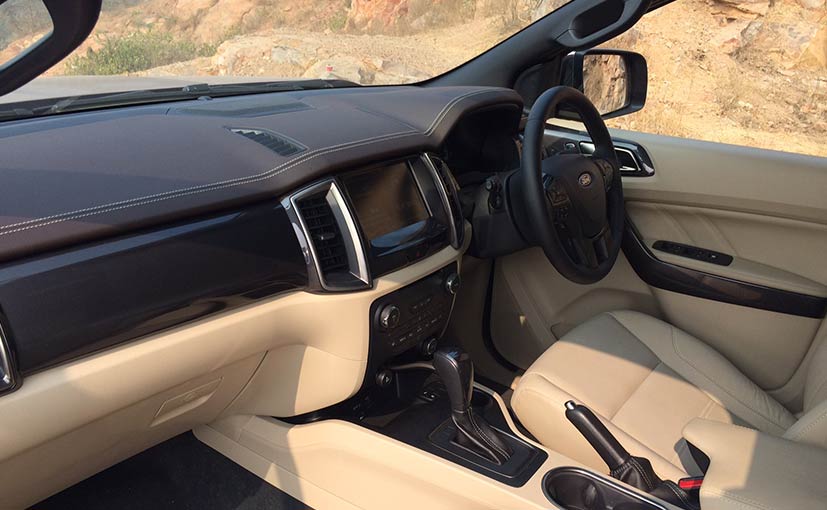 It is quite neat! The car's instrument cluster is also modern and feeds you plenty of info - using two TFT screens on either side of an analogue speedo. And then there is the fact that most of the fancy stuff is on the Trend variant too - including rear parking sensors, reverse camera and the power tailgate! The Titanium even has power-folding third row of seats - but even the manual seats are easy to fold and open. The 3rd row isn't the most spacious though, however there's loads of luggage space when you keep those seats folded. All variants have 3-row air-conditioning, while the tyre pressure monitoring, front parking sensors and the sunroof are only on the Titanium. 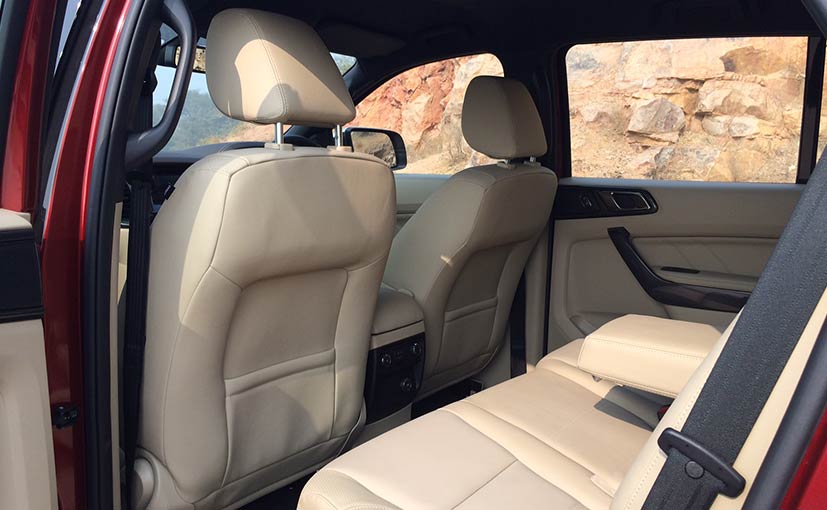 I had expected Ford to be very very aggressive on pricing by severely undercutting the Fortuner. But by offering prices that start just under Rs 24 lakh and top off at around Rs 28 lakh Ford has left plenty of room for Toyota to comfortably price it's upcoming next gen Fortuner with ease. A real miss I would think.

Class-leading ride comfort, good - no very good equipment, plenty of grunt and looks befitting the price tag. I think Ford has a very strong flagship for its SUV range. Now if only I could really call it that - so Ford can you please hurry things along and get us the compact SUV that can sit between the EcoSport and the Endeavour quickly?

Watch Our Review of the New 2016 Ford Endeavour Here -