One of the most distinctive elements of the Monster family, the steel trellis frame, has been given a miss, and replaced by a cast Aluminium frame. The Ducati Monster is about to get a major update, as latest spy shots of a test mule reveal. The all-new Ducati Monster has been spotted while undergoing test runs somewhere in Germany. And from what we can see from the spy shots, the bike features several changes, including an all-new chassis and swingarm design. The frame on the updated Monster seems to be a cast Aluminium frame, a clear departure from one of the signature design and structural elements of the Ducati Monster since its launch in 1992, the distinctive trellis frame.

Apart from the frame, one of the other key changes is likely to be a new engine, possibly a 950 cc engine borrowed from the Ducati Multistrada 950, which will give the bike a power, as well as displacement bump, from the current 821 cc engine, which makes 109 bhp of power and 85 Nm of torque. Also different is the front structure, housing the steering head, which looks screwed together in two parts. The rear sub-frame is also new, and seems to be a cast construction on the new Monster. 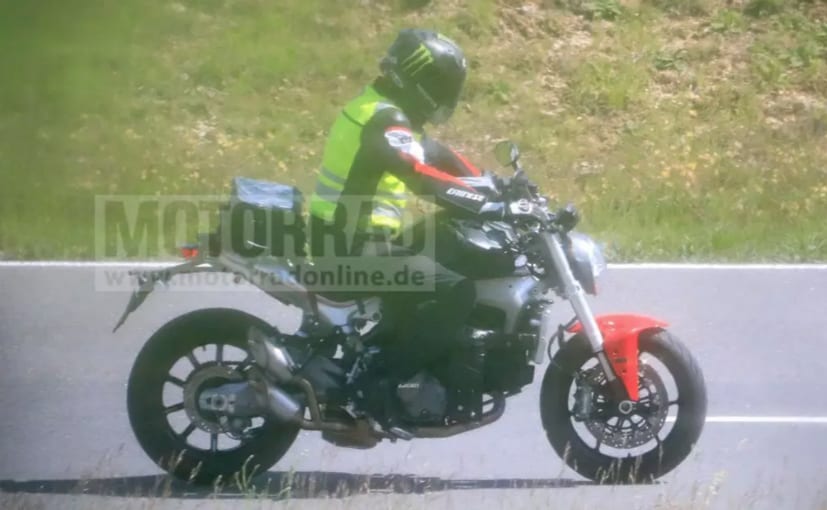 The alloy wheels seem to be different, as is the swingarm and exhaust design

The exhaust system also appears to be all-new, as is the overall appearance of the bike, which looks slimmer than the outgoing model. The chunky swingarm of the current generation Monster also is replaced by a slimmer unit, and the exhaust design also seems to be new, with two fat end cans. The new Monster is also expected to get a brand new electronics suite which will be more comprehensive than before, possibly featuring cornering ABS, and traction control system.

While there's no word on a launch date yet, with most motorcycle shows later this year cancelled or postponed, there could be an online or special unveil event for the 2021 Ducati Monster. From the looks of the bike seen in the spy shots, it doesn't look very far from production, so we can expect to see it in finished form, possibly sometime by the end of 2020. Ducati India has some new launches planned for later this year, starting with the Ducati Panigale V2, followed by the updated Multistrada 950. The new Ducati Monster can be expected sometime in the first half of 2021 in India.