Exploring The Land Of The Thunder Dragon On TVS Apache Motorcycles 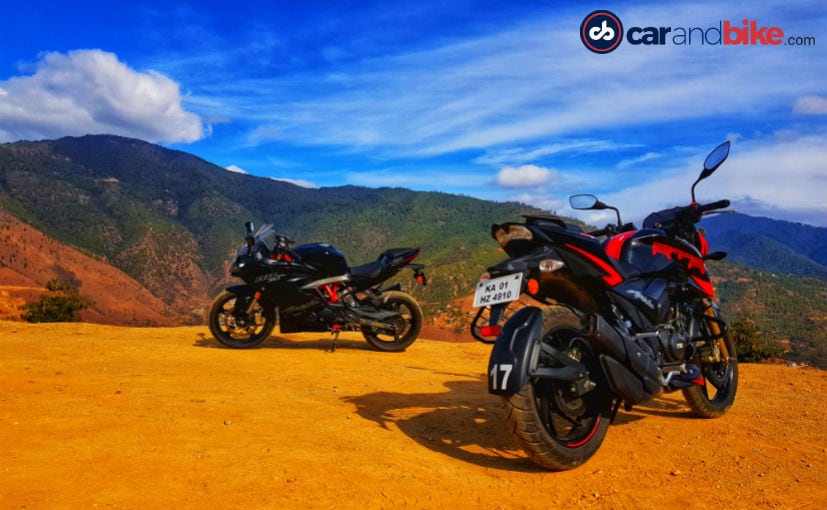 The temperature dropped below -3 degrees, and I'm holding on to the engine to get some warmth into my numb hands. The light is fading fast and I've still some distance to get to my destination for the day - Phobjikha, in the heart of Bhutan. The TVS Apache RR 310 is my companion for the day and the ideal mile muncher one could ask for. The cold isn't helping but the view is worth every bit. But what exactly am I doing in our carbon negative neighbouring country riding the flagship Apache? Read on to find out. 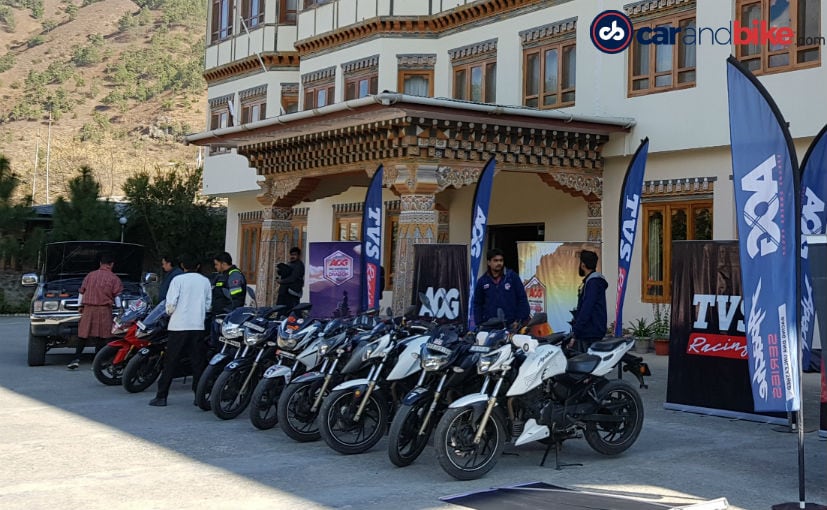 Curated and organised by TVS, the ride is supported by back-up vehicles and technicians

In a span of a little over a decade, the TVS Apache series has grown exponentially with bikes ranging from 150 cc to 313 cc. TVS has sold over three million Apaches globally and the brand has its set of followers beyond our borders too. The company sells these bikes in several countries, some of them in South Asia. So, it was about time that the Apache Owners Group (AOG) got a taste of an international ride, and what better place than the picturesque Himalayan kingdom of Bhutan? We joined the TVS Apache Owners Group (AOG) on its maiden international ride to the Land of the Thunder Dragon.

As many as 15 TVS Apache customers signed up for the ride, most of whom had ridden their bikes to the starting line of the Ride To Bhutan. The ride originally started from Siliguri in West Bengal, but we joined the riders across the border in Bhutan's capital, Thimphu. Over the next five days, we rode from Thimphu to Punakha and then Phobjikha, before culminating our journey in Paro. Entering the country is relatively easy on motorcycles, as long as your paperwork is in order. 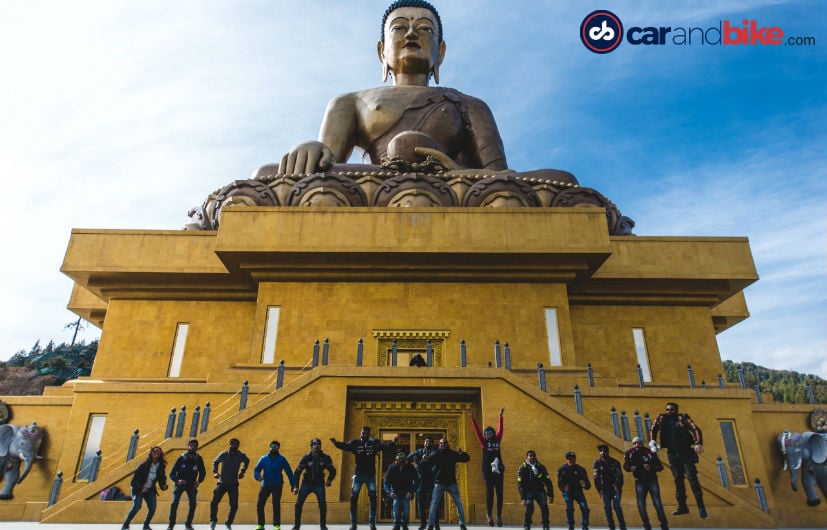 The first day of our ride was a relaxed one as we set out to explore Thimphu on our bikes. Having given the choice between the Apache RTR 200 4V and the Apache RR 310, I chose the former since it's a motorcycle I was familiar with. The RTR 200 4V was the perfect companion for the narrow roads of Thimphu, as we climbed towards the Buddha Dordenma temple, a gigantic Shakyamuni Buddha statue overlooking the city. After spending some time at the temple, we headed to explore the capital that is a melting pot of culture and development. The local cuisine is what we had to try and had some lip-smacking local dishes like Ema Datshi, keeping our bellies warm. 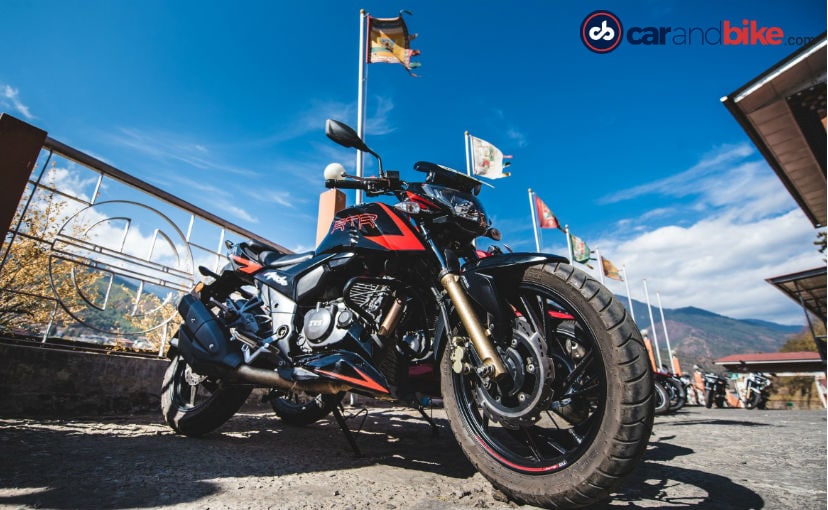 The Apache RTR 200 4V offers brilliant handling, while being comfortable for long hours on the saddle

The real ride began on the second day as we moved from Thimphu to Punakha via Dochula Pass. The Apache RTR 200 4V was my companion for the day and the mountain roads ensured that I was in for a treat. The well-paved roads of Bhutan are a motorcyclist's delight and helping the cause was the near perfect sunny weather. The RTR 200 4V is an excellent companion, both within city limits, and out on the highway, even on twisty mountain roads, and from the very beginning, I was right at home on the saddle. The 200 cc motorcycle with its 20 bhp of power and racing heritage performed brilliantly over the 80 km ride. Bhutan is full of roads carved out on the side of mountains and seldom do you get straight stretches to throttle away. The Apache's agility was just perfect for the roads here, as we swept left and right through the vast empty stretches without having to close the throttle. 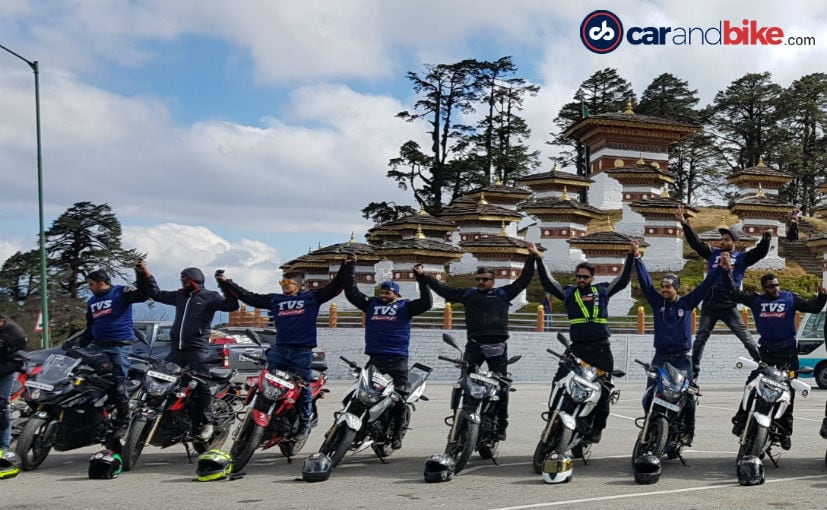 The Dochula pass is located at an elevation of 3,108 metres, and also holds the 108 stupas that were built as a memorial in honour of the Bhutanese soldiers who were killed in the December 2003 battle against Assamese insurgents from India. The stupas are a must visit and offer a panoramic of the eastern Himalayan range.

TVS Motor Company's first international customer ride had nearly the complete Apache line-up with the Apache RTR 160, RTR 180, RTR 200 4V and even RR 310 owners in attendance. As we gathered for dinner later that evening, the owners narrated anecdotes about their adventures and what brought them to Bhutan. It was heartening to see the love for motorcycles and travel bringing this fun group of individuals together. 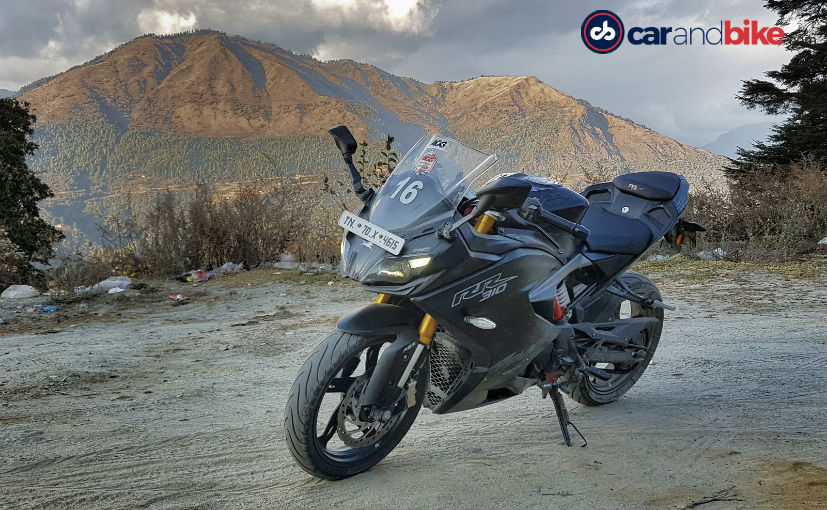 The TVS Apache RR 310 is surprisingly comfortable for long rides, despite its sportbike mannerisms

With Day 3 shining upon us, it was time for me to trade in the RTR 200 4V for the Apache RR 310. While I had briefly sampled the TVS flagship in India, this was for the first time we were to spend some quality time together. The Apache RR 310 was a revelation then and sailed through the winding roads of Bhutan with its 34 horses at play from that 312.3 cc single-cylinder engine. The bike packs in the practicality of the RTR 200 and amplifies it with more power, agility, and sheer ride-ability. The 310 does have a slightly dedicated riding position, but the flagship Apache manages to balance the riding stance well. At no point did it feel strained, but the real challenge was yet to come. 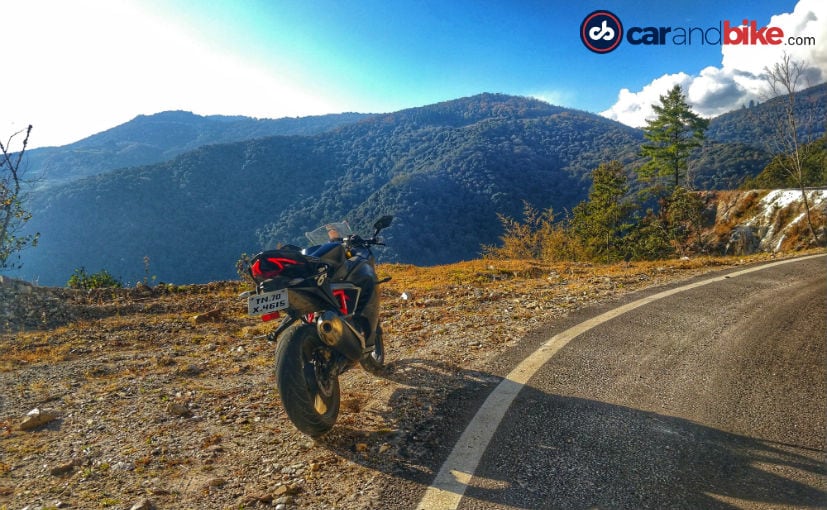 The Apache RR 310 grabs attention no matter where you go

Phobjikha, we were told, was one of the coldest locations on our ride and temperatures were dropping fast as we climbed higher. The organisers wanted us to have an authentic stay experience in the unknown, which meant we were lodged in a resort in the middle of wilderness and we had to go through some rough roads (at least it seemed so) to get to the destination. I was immediately regretting my decision to choose the Apache RR 310 for the day. Bad roads have seldom been friends with sportbikes and the Apache would be no different, or so I thought. 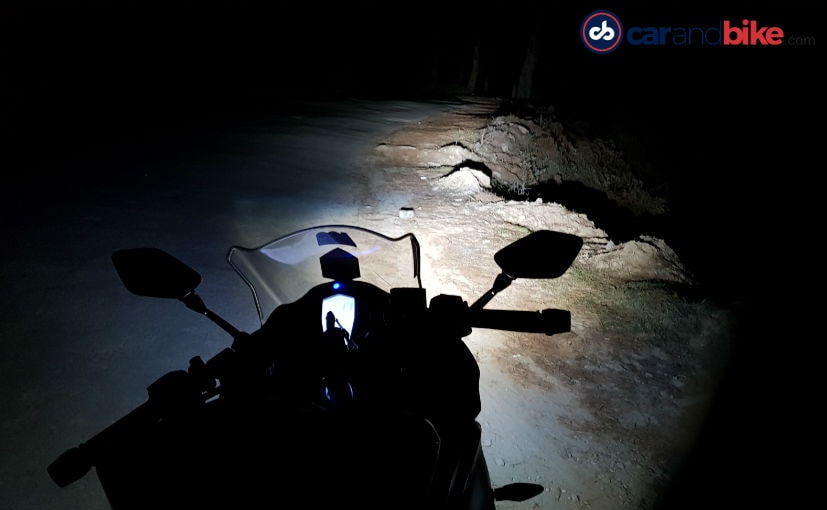 Bad roads and no light, the Apache RR 310 glided through it all

We were losing light fast and the mercury had dipped well below zero. For someone used to humid weather all year long, temperatures like these can get a little overwhelming. The roads went from bad to worse, but the supple suspension of the 310 ensured that I was gliding over the broken roads; now this is a sportbike with good ride quality! The bike just gobbled up the rough patches with barely a rattle from its body. The bike showcased its range of versatility as a track tool and a tourer, and it is this characteristic that makes you forgive the vibrations that otherwise plague the lovely motorcycle at high revs. While I have always rooted for the Apache RTR 200 4V as one of my more favourite Apaches, the Apache RR 310 now sits a very close second on that list. 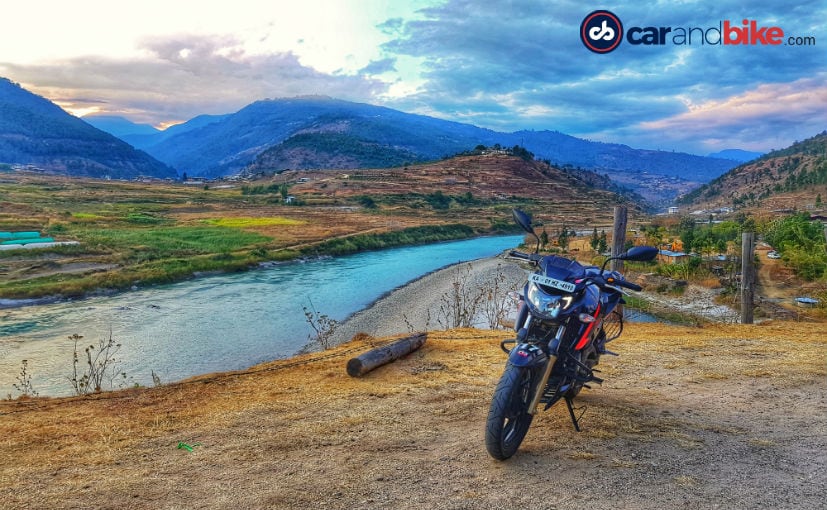 Having survived temperatures of -9 degrees overnight, we now had to prepare for the last leg of the journey. Starting from Phobjikha to Paro, this was the longest stretch of the ride with about 180 km to complete. I reluctantly swapped the keys with a fellow journalist and was back on the RTR 200 4V. Our convoy of 15 Apaches riding in near-perfect sync was one of the highlights of the last day's ride. Much to everyone's relief, there were no breakdowns or any untoward incident involving a fall or crash. And TVS ensured that the customers only concentrate on riding their motorcycles, with the luggage taken care of in a vehicle that followed. The technicians would also help out customers if there were a need. 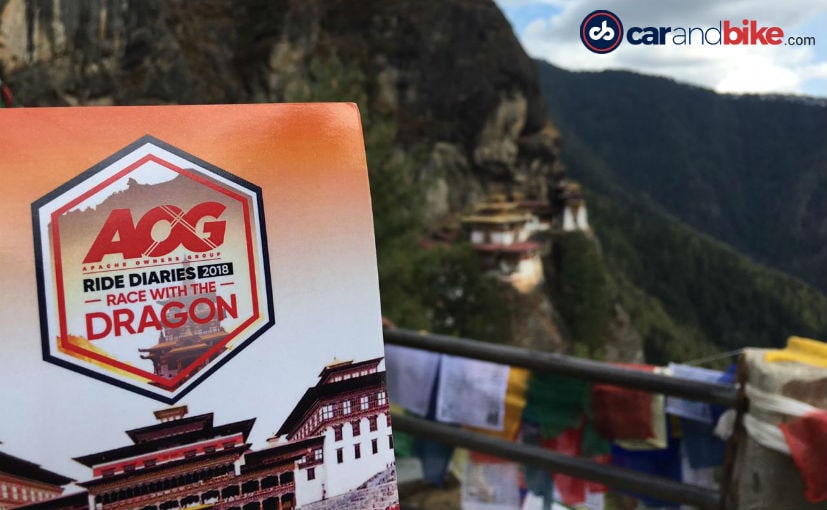 On our last day in Bhutan, we decided to give the bikes a little rest and instead let our feet do some climbing instead. We headed to the Paro Taktsang monastery, more commonly known as the Tiger's Nest, which is a three-hour climb one-way and definitely not for the faint-hearted. To say that the trek to the iconic Tiger's Nest monastery is steep is an understatement. In the end, I did manage to make it to the top, despite the constant huffing and puffing, and almost giving up once, but the reward was the magnificent view from the top. Over 18 kilometres and 25,000 steps later, the trek felt worth every effort even if it meant having sore legs the next day. That being said, I would prefer riding my way to the top the next time if that is an option. TVS couldn't have chosen a better country to kick-start its first international customer ride. With scenic views and friendly faces all around, Bhutan just leaves you in awe and wanting more. It's exactly the kind of country that should be explored on a motorcycle and I am fortunate that I got to do that in this lifetime. It's something ticked off my bucket list, and you should add it to yours too.