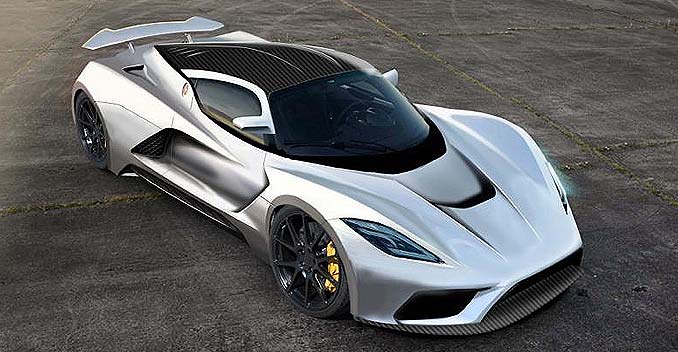 Hennessey has been in the news for the right reasons and they have also established themselves as the masters of speed. Therefore, it doesn't come as a surprise when they published details of the Venom F5. Long story short, Hennessey is gunning for the top speed world record with the Venom F5, yet again!

We've seen what the Venom GT can do, but there is more on offer with the F5. The Venom F5 will be charging towards attaining the top speed record as it can do an estimated 465Km/h. The Venom F5 features a more aerodynamic body that will reduce drag coefficient from 0.44 to below 0.40 while generating a high amount of downforce, thanks to a rear diffuser.

Under the hood beats a 7.0-litre, twin-turbo, V8 engine, which is the same as the one on the Venom GT, but the folks at Hennessey are looking to squeeze out more than 1400bhp. This will be achieved by increasing the size of the turbochargers and upgrading the intercooler and fuel system.

The car weighs around 1300 Kg; its lightweight construction can be attributed to the extensive use of carbon fibre and aluminium. The Venom F5 will be faster than the GT and that is what will make it a potent competitor for the top-speed prize.

The Venom F5 will be offered with a newly developed single-clutch paddle-shift gearbox that will enable the vehicle to accelerate quicker. Moreover, a GPS-based stability/traction control system will help channel the F5's immense power and provide an increased margin of safety, whether on a racetrack or a back road.

A minimum of 30 units will be built and production will start after Hennessey rolls out the final Venom GT.