Franco Morbidelli led the race right from the opening lap to take his maiden MotoGP win in the San Marino Grand Prix, while Fabio Quartararo's retirement has dropped him from the lead in the points table with Andrea Dovizioso taking over the championship standings. 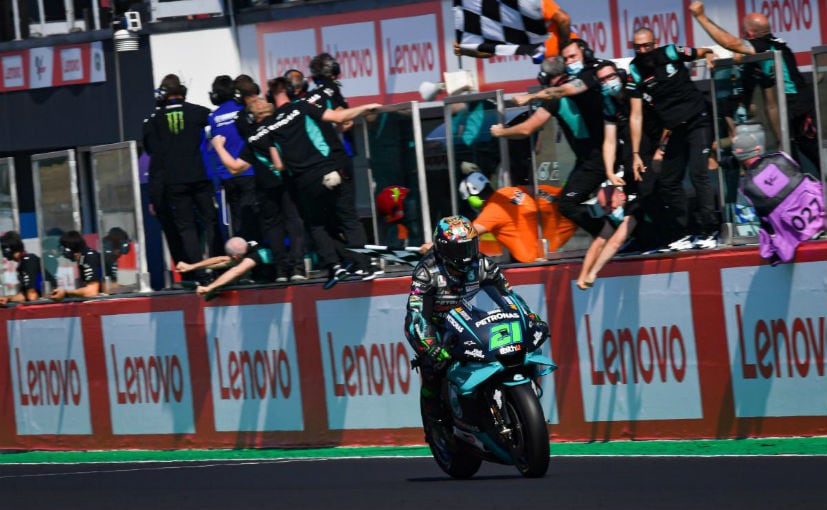 Petronas Yamaha SRT rider Franco Morbidelli took a smashing win in the 2020 San Marino Grand Prix, claiming his maiden victory in MotoGP. The rider managed to keep the competition at bay from teammate Fabio Quartararo, who eventually retired from the race, apart from fending off Francesco Bagnaia's late charge on the Pramac Ducati. The race also saw Suzuki's Joan Mir make some brilliant moves to claim the last spot on the podium at the end of the race. 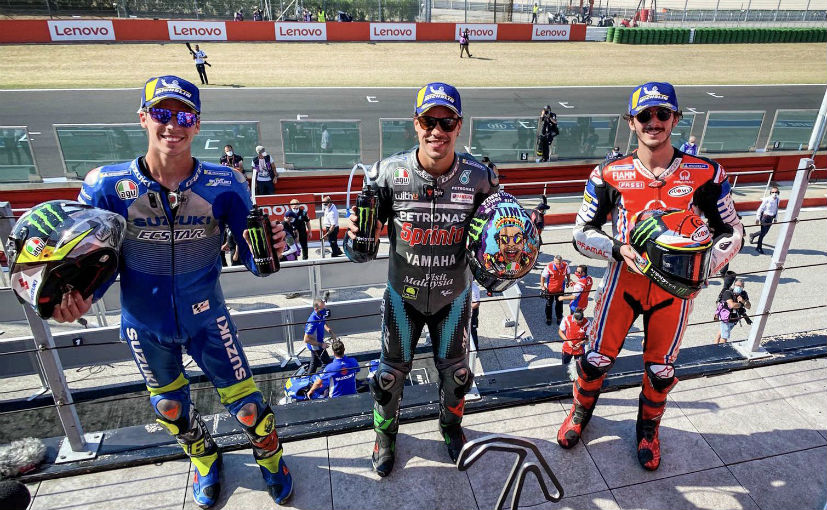 On the podium - Franco Morbidelli, Francesco Bagnaia and Joan Mir

Yamaha's factory rider Maverick Vinales started from pole position but dropped to third on the opening lap as the second-placed Morbidelli had a fantastic launch. The Petronas rider plummeted to the top on the first corner itself with Yamaha's Valentino Rossi moving into second. Meanwhile, Quartararo dropped to fifth on the opening lap. Rossi tried to pass Morbidelli on the following turns but the rider was at his defensive-best denying the top spot to his mentor.

Behind the top riders, Vinales struggled to keep pace and was soon passed by Jack Miller on the Pramac Ducati to take P3. Vinales was now facing pressure from the fifth-placed Quartararo who found a gap on Turn 4 of Lap 7 to take P4. However, as luck would have it, the rider crashed while attempting to make the pass but managed to join at the back of the grid after a trip to the pits on Lap 20. Just when it seemed that the rider just might recover to a decent position, Quartararo crashed once again on Turn 6 due to a cold front tyre, ending his run in the race for good. 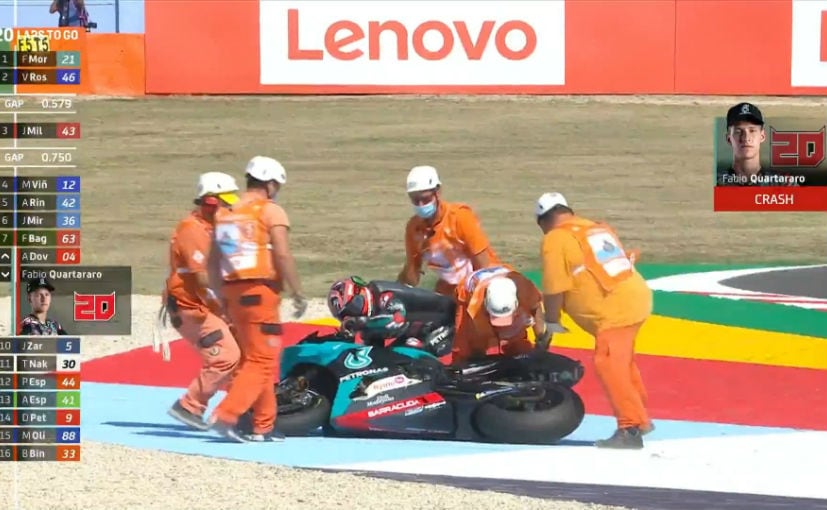 At the front, Morbidelli extended his gap by a second over Rossi by Lap 14, which increased to 2 seconds four tours later. At the back, the third-placed Miller was facing heat from Alex Rins and the Suzuki rider found a gap on Lap 14 to take P3 from the Pramac rider. Miller was passed by teammate Bagnaia on the same lap to take P4 dropping his teammate further in the order.

Bagnaia was now charging at the top order and pushed further to pass Rossi for P2 on Turn 11 of Lap 21. The rider was now looking at the top spot but couldn't catch up to Morbidelli's terrific pace. The Pramac rider was still taking heat from Rossi, Rins and Mir, all aiming for the podium. As the race entered the final lap, Suzuki riders Rins and Mir were breathing down Rossi's neck. Mir found an opportunity to pass his teammate at the start of the final tour and moved up to P4. He then went after Rossi, finding the space to pass the M1 on the inside of Turn 10 to take P3, denying the Yamaha rider his 200th podium finish. Morbidelli was comfortable up front and crossed the finish line 2.217s clear of Bagnaia and became the fourth new winner of 2020. While Bagnaia secured his maiden MotoGP victory, Morbidelli bagged his maiden podium finish in the premier-class. The season so far has seen 12 different riders on the podium.

Alex Rins completed the top five riders followed by Vinales, who suffered for choosing a hard rear tyre despite a brilliant run during qualifying. Andrea Dovizioso on the factory Ducati finished at P7, having started at P9 on the grid, and now leads the championship in the rider standings with a six-point lead over Quartararo. LCR Honda's Takaaki Nakagami finished at P8 but was demoted by a single spot for exceeding track limits. The decision promoted Jack Miller to P8 as a result, followed Pol Espargaro of KTM rounding up the top ten.

Tech 3 KTM's Miguel Oliveira moved up to P11 after a poor start finishing ahead of Brad Binder on the factory KTM. Aprilia's Aleix Espargaro finished at P13, with Iker Lecuona on the Tech 3 and Avintia Ducati's Johann Zarco taking the final points in the race. Danilo Petrucci on the factory Ducati finished at P16, followed the Repsol Hondas ridden by Alex Marquez and Stefan Bradl. Bradley Smith on the Aprilia rounded up the finishers in the San Marino GP. Apart from Quartararo, Tito Rabat of Avintia Ducati crashed out late in the race.