Royal Enfield Scramble 2018: Looking For Adventure With The RE Himalayan

We were recently invited to participate in the fourth season of the Royal Enfield Scramble, its adventure off-road riding event. Read on to know more about our experience. 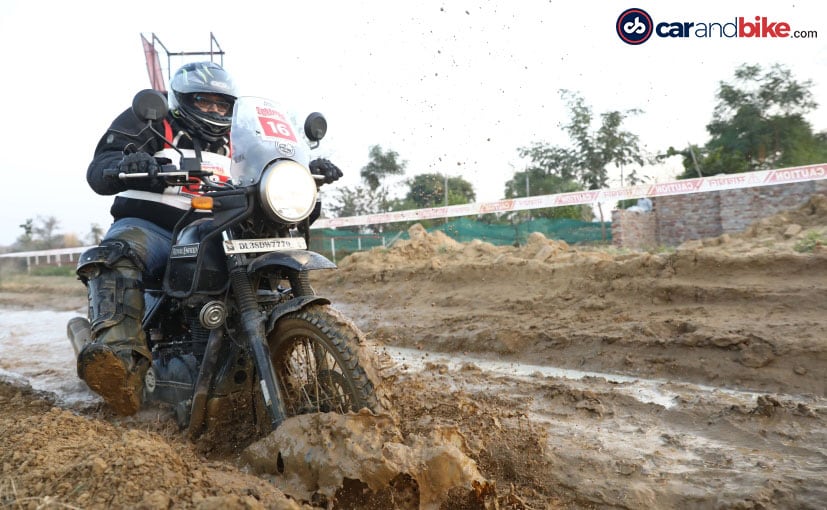 Royal Enfield, as a brand, holds quite a big value in the Indian motorcycling community and has been a crucial part of our automotive history. Despite several modern and technologically advanced offerings present today, one reason why many customers still go for a Royal Enfield motorcycle is purely because of the love and camaraderie its owners share for the brand. The company knows this very well, which is why Royal Enfield has been hosting some of the most popular customer-driven riding events. One such event is the Royal Enfield Scramble, a specially designed adventure riding competition that tests your riding ability, navigation skills, and teamwork. Luckily, this year, Royal Enfield invited us to be a part of the fourth season of this competitive riding event, which was held in Gurugram. 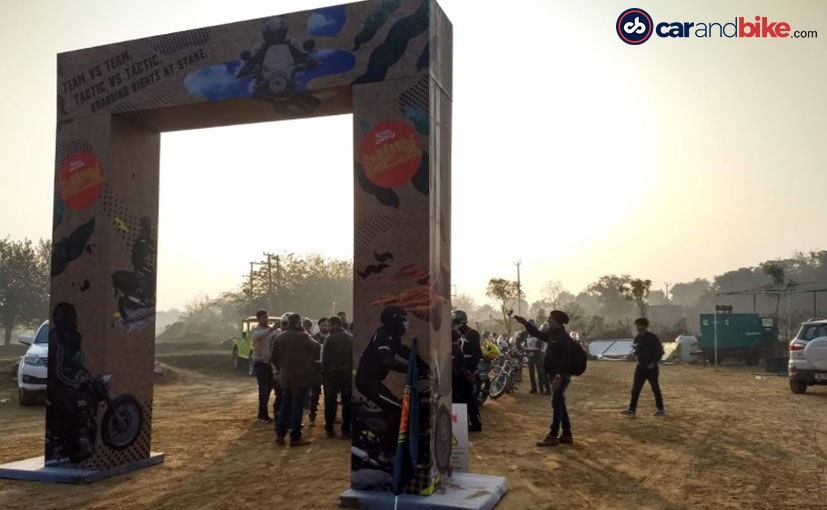 Organised by Himalayan Motorsport, the 2018 Royal Enfield Scramble offers three days of hard-core off-road riding, competitive adventure sports events, and more. A total of 10 teams participated, mostly from Delhi and NCR, and each team consisted of two riders, which includes the media team that I was part of. While the event is mainly suited for the Royal Enfield Himalayan, it did not stop many participants from entering the competition with bikes like the 350 Electra (now Bullet ES), Classic 350, Thunderbird 350, Classic 500, and even a Bullet 500. In fact, one of the riders from the winning team rode the Classic 350. I, on the other hand, was given the new BS-IV compliant, fuel injected, non-ABS 2018 Royal Enfield Himalayan. I was paired with a fellow journalist from AutoX magazine. 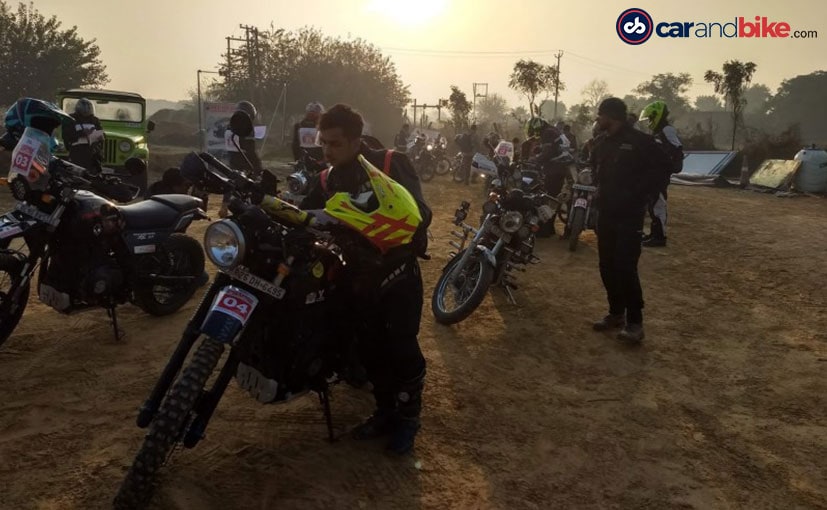 The base, the starting point, and the off-road arena, for all three days, was going to be the Off-Road Adventure Zone (ORAZ) in Gurugram. The first day or 'Day 0' mainly involved briefing for the main event and a few small technical riding tasks in the off-road arena. Before I get into the details, let me just tell you the only off-road riding experience I have had before this, apart from riding on the pothole infested roads of Mumbai, was a 3-hour adventure and off-road training session I got at the Triumph Adventure Training Academy. Little did I know that everything I learned there, were just baby steps compared to what I was going to experience here.

So, coming back to the technical tasks of Day Zero, it involved riding on this meticulously designed off-road track which included steep climbs up embankments, and downhill sections, sand tracks, gravel, and small ditches, and a bunch of other obstacles. Each participant was timed for each one of these tasks, and it was during one of these levels that my bike got stuck in a field of tyres, and I lost a massive amount of time, putting my team at the bottom of the scoreboard for the first day. However, I still had the chance to redeem myself during the main event which was going to take place during the following two days. 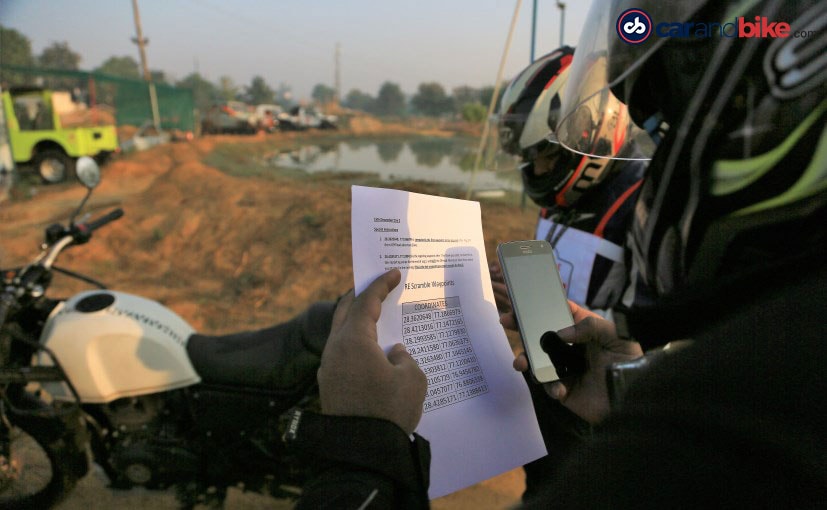 To give you a gist of it, the main event was divided into two days and each day the teams were to be given a set of about 9 GPS coordinates, located in and around the Gurugram area, which were essentially 'waypoints' to cover. Each one of these coordinates held a certain amount of points, and all the teams had to navigate to every single one of them, not necessarily in the given order, using Google maps. The first team to cover all waypoints and reach the final destination, within the stipulated time, will have scored the highest points for that particular day. The list also included a couple of dummy waypoints and a few bonus tasks, which were to be revealed to us only at select coordinates. Furthermore, at the end of each of these two days, the organisers planned another technical task, one more challenging than the previous day. 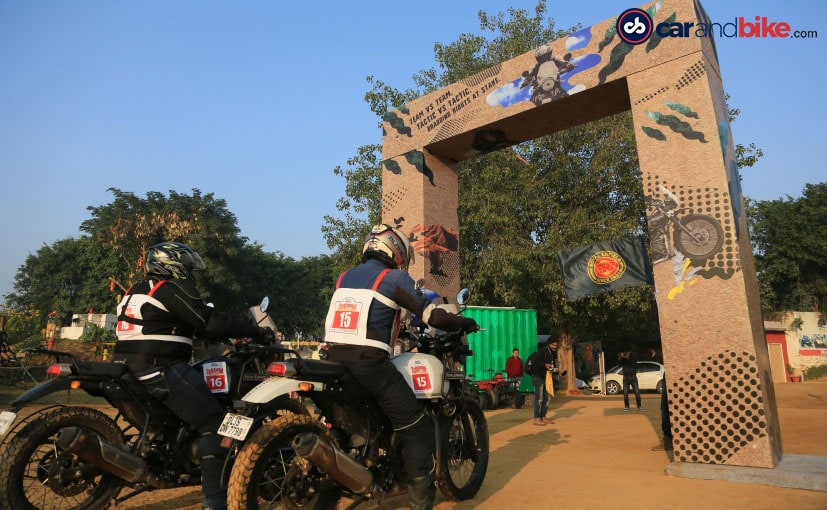 So, 10 minutes before the flag-off we were handed out the list of coordinates for the day, and that was all the time we were going to get to formulate a strategy to cover all the waypoints. The first coordinate on the list was a compulsory one, which means all the riders were heading out for the same location. As soon as I hit the road, I noticed a peculiar problem with my motorcycle, which did not allow me to go past 60 kmph because my clutch cable was getting jammed. While from a certain point on the route the speed limit was below 60 kmph, it was on the highway where all the riders whizzed past me, including my partner, making me the last one to reach the first waypoint. Lucky for me, by the time I reached the first destination, my teammate had already set a suitable course for us to cover the remaining coordinates. 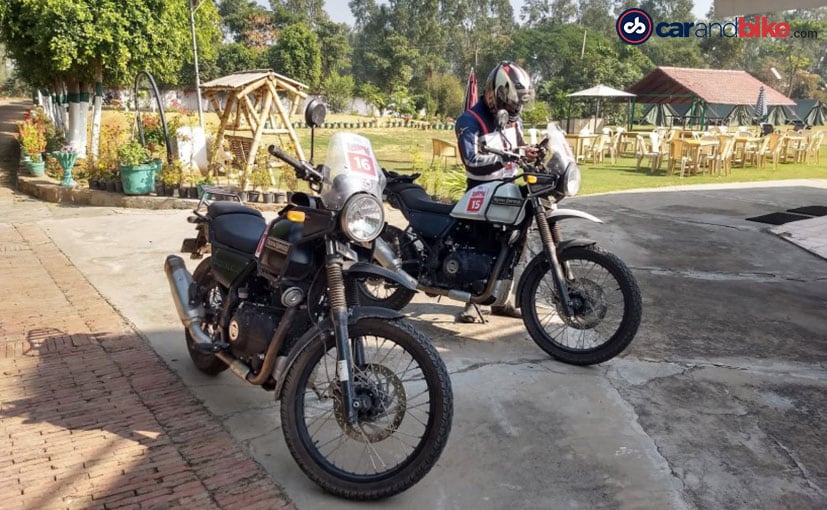 Within the first few hours, we had covered around 3 to 4 waypoints, and it was at one of these locations that we got a chance bag some bonus points as well. It was a simple task that involved searching and retrieving a blue sash from a nearby coordinate, but it took us about 10 minutes to complete. The next location on the map was around 32 km away and for the most part of it we were on the highway, which means I had to cruise at 60 kmph. Luckily it was at this next waypoint that I got some mechanical help and got my clutch cable fixed and now it was time to make up for the lost time. Or so I thought. 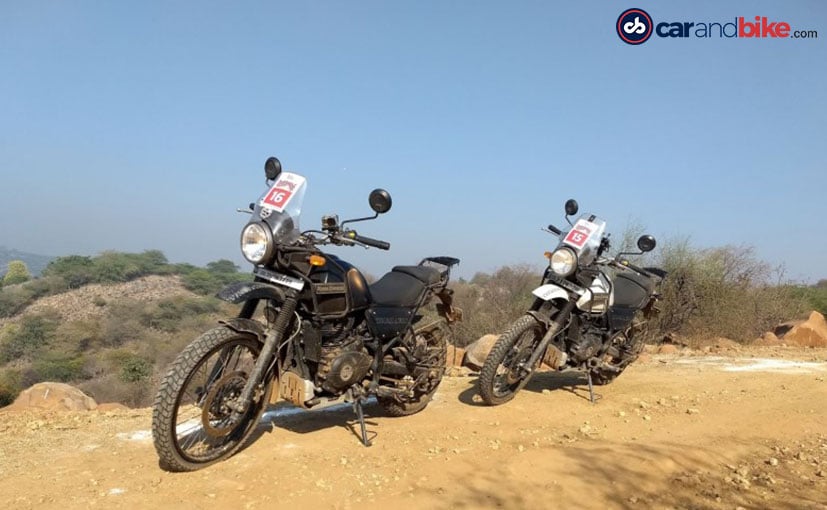 The RE Himalayan we had was the fuel-injected BS-IV model, and felt at home in the wilderness

At the next waypoint, which was practically inside a forest, we were given the option to achieve some bonus points again, considering we had lost few points already, we decided to make up for it here. As we had no network connection to find out where exactly the coordinates led us, we decided to keep following the trail till we reached the waypoint or the nearest network tower. Interestingly enough the trail had direction markers along the path and assuming it was made by the organisers so that we do not get lost, I and my teammate decided it would be ideal for us to follow the markers. Turns out it wasn't, and if you still haven't guessed it yet, yes, we were lost! Sadly enough, we realised this after almost an hour of going deep inside the trail. The route itself, however, was one of the most challenging off-road trails ever, filled with long patches of red soil, sand, gravel, stone paths, steep uphill climbs and downhill sections and much more. In fact, it took us almost an hour and a half to come out of the trail and into civilisation, and by that time we had already reached our deadline, missing out on about four more waypoints. 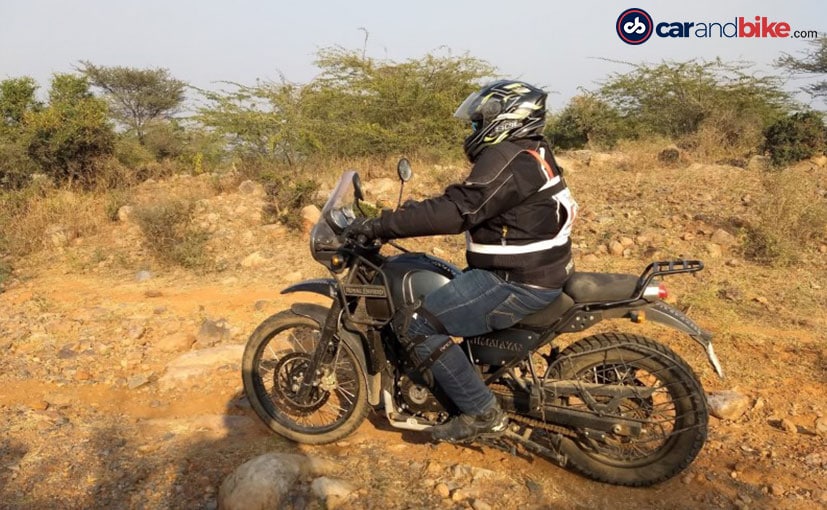 With no time in hand, we decided to head directly to the last coordinate, which was OTR Dirt Park, close to ORAZ, and it was here that we had to do complete Day 0's main technical task. The specially laid out track was equipped with patches of hard soil, loose soil, sand, ditches and much more, luckily for me, after spending most part of the day on a much tougher natural off-road trail, this one did not feel all that difficult, and I finished it in 1 minute and 44 seconds, not the best but at least better than at least 3 other participants. 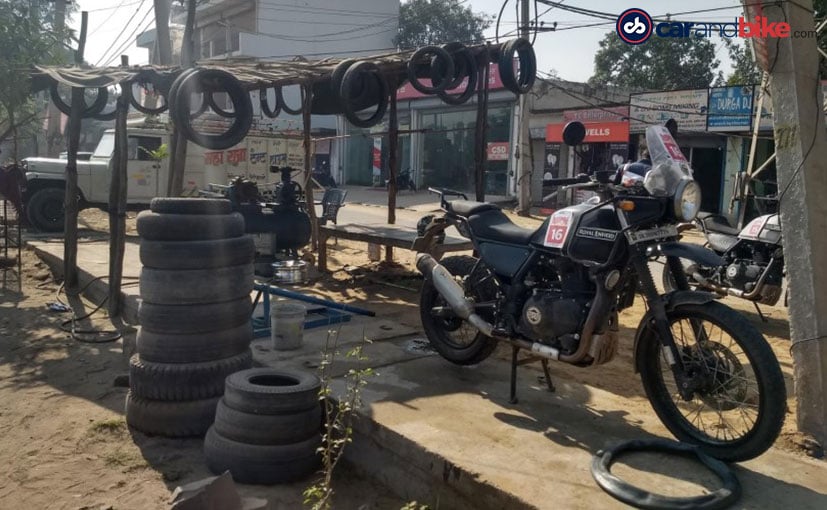 The Royal Enfield Himalayan was punctured twice on the last day

After an eventful Day 1, I was hell-bent on making up for all the points our team had lost the previous day. But, it was easier said than done. As I walked up to my motorcycle in the hotel parking lot I noticed that the front tyre was flat, turns out my off-road fiasco from the previous day had left a slow puncture in the bike's front tyre. To make things worse, it was a Sunday and there is no puncture guy to fix the tyre for me at 7:30 am nearby. By the time I got it fixed and reached the starting point, I was already over an hour late, which was the biggest setback for the final day. Or so I thought. 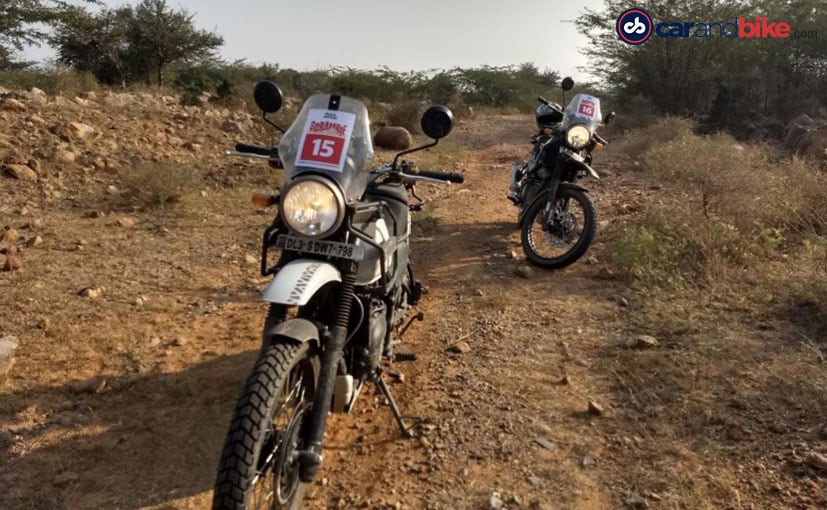 While the podium was nowhere on the horizon for us, we were eager to properly finish the race, and achieve all the waypoint. Making the best of the lost time my teammate had already devised the entire route based on the new coordinates, as soon as I punched in my start time at the flag-off point we sped to the first waypoint, which was only about 15 mins away. From there, the next waypoint was about 7 km away but the entire stretch was an off-road trail, the same section where we were lost the previous day. So, as I carefully manoeuvred my motorcycle to avoid another puncture, we came across a bad patch of rocks and at one point I could literally hear the tube in my front tyre burst and the air gushing out. So, here I was again, in the same forest we got lost the day before, and with over 6 km of off-road trail to cover with a punctured tyre. The only option for me at that moment was to ride the bike as slowly and carefully as possible and reach civilisation and get a new tube for the tyre. So, after wasting over an hour or more, we finally reached a puncture shop and put in a new tube. At this point, I and my teammate were so exhausted that we were ready to head back to the base and be done with it. But the competitive spirit in us had not died, and as we just had a couple of hours more before the deadline, we decided to reach as many waypoints as possible. The nearest waypoint was about 11 km away and in the opposite direction, so we skipped lunch, got back on the bike and headed out towards it, before heading back to ORAZ. 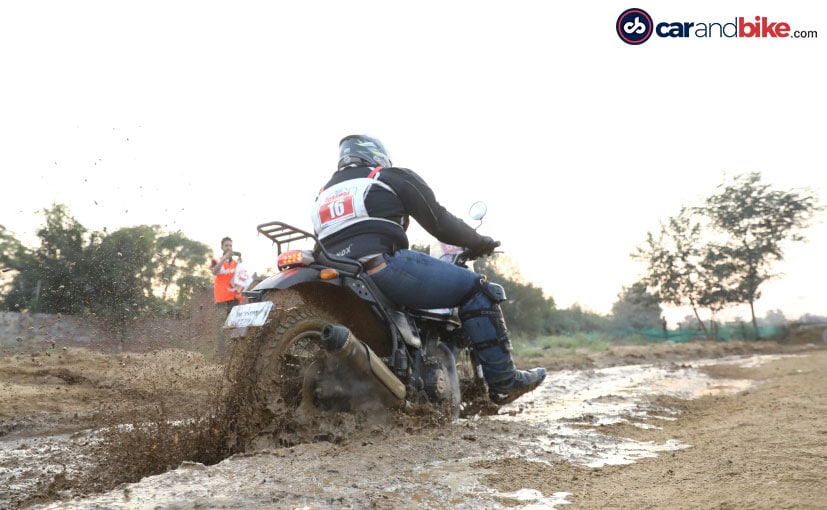 Finally, it was time for the final technical task of the event, which was possibly the most difficult one so far. This time around in addition to gravel, sand and mud, we also had to go through heavy muck and slush that was almost over a foot deep, along with many more obstacles. Lucky for me I was on a Himalayan and things were a bit easy for me, compared to other riders who were on their Classics, or Bullets, or Electras. In fact, I completed a course of the track in 5 minutes and 28 seconds, at the eleventh position. To put things into perspective, the longest it took someone to complete a lap of this off-road track was 12 minutes and 31 seconds. 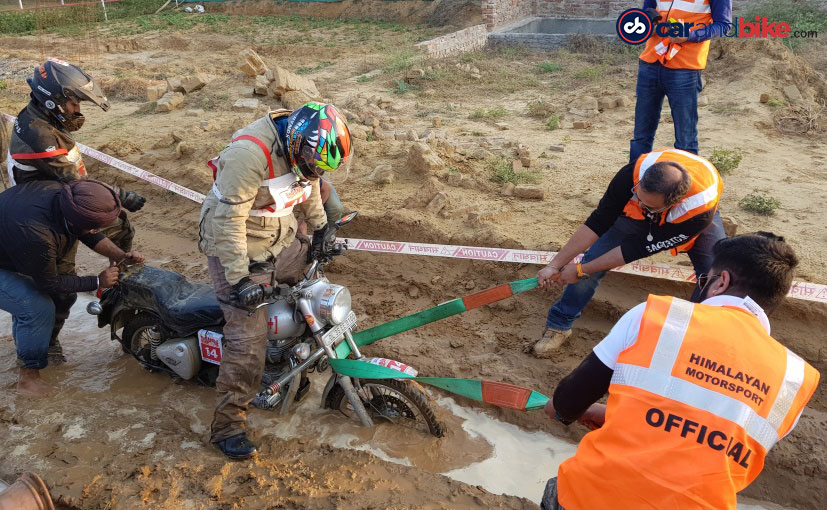 Despite the fact that we were not able to complete the race on both days, there is no doubt that the experience was unlike any other. After three days of hardcode adventure and off-road riding surely my body was aching in places I never thought I could feel pain in but all said and done, it was all worth it. So, Royal Enfield, do not forget to invite me again for the next season of the Scramble. It will be time for redemption!