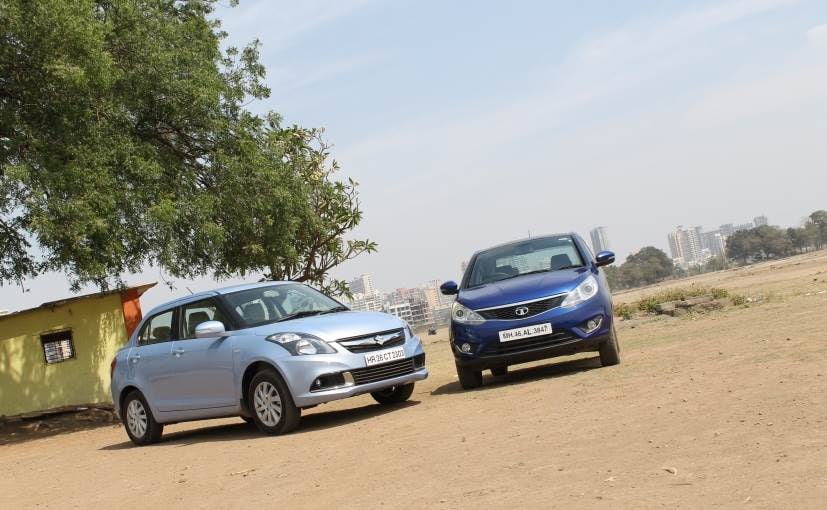 If you go back 14 years, in 2002, you'll remember seeing a sedan that was smaller and cheaper than every other sedan in the market. But it was equally spacious and decently equipped given the fact that it was the same size as a hatchback. Yes, I am talking about the Tata Indigo CS, the first sub-compact sedan from the home-grown auto major, which practically gave birth to the concept of sub-4 metre sedans in India.

But, you see, the way things work in any industry is that once you have a game changing product you have to keep on perfecting it to keep the trend alive. Tata was the first, yes, but didn't quite innovate the product further, which is when Maruti Suzuki India came out with a newer, stylish and better equipped sub-compact sedan - the Swift Dzire, in 2008. The Swift Dzire has ruled the market thereafter and it's been consistently selling over 18,000 units per month on an average, which are combined sales for the manual and petrol automatic version. 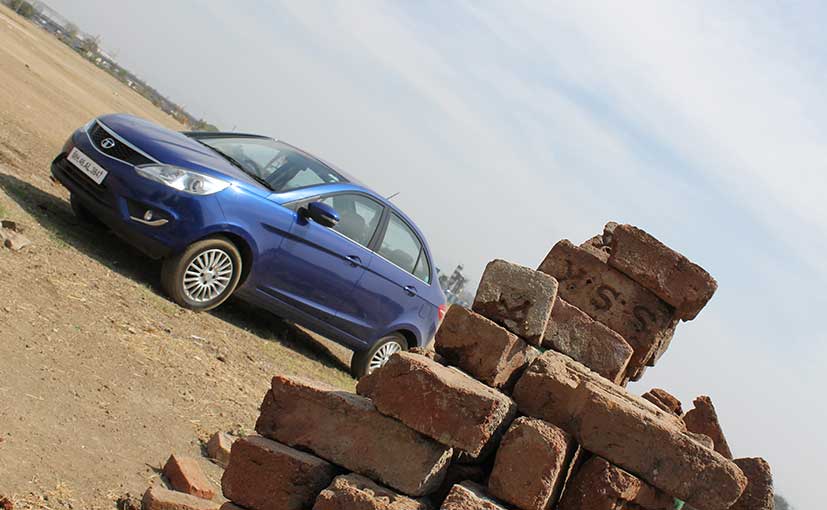 With HorizonNext however, Tata is seeing things differently and you can see it with the Zest. It's stylish, well equipped and powerful, even but that wasn't the biggest selling point of the car.

Tata Motors understood the need of the hour and launched the Zest with an Automated Manual Transmission (AMT) - F-Tronic gear box, making it the first diesel car in that category to get one. But as we know Maruti isn't someone to stay out of a competition and launched the Swift Dzire diesel with an Auto Gear Shift (AGS) transmission which is why it sees itself competing with the Zest, again. But has the Maruti Suzuki Swift Dzire managed to get it right? Obviously, we had to take both out for a spin to know more. 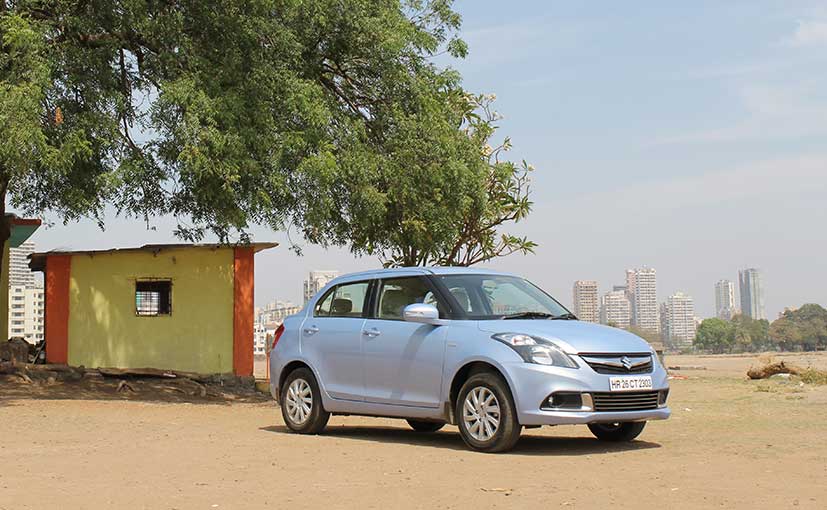 In many ways, the Tata Zest and the Maruti Suzuki Swift Dzire are the closest competitors in market. Well, yes they belong to the same sub-compact sedan segment but that is not the only thing they have in common. Both the Zest and the Swift Dzire have the same 1.3-litre diesel engine, they are similar in dimensions and most of all, both the cars come with the same 5-speed AMT gearbox. Yes, same, because their source is the same and this makes things a bit interesting. 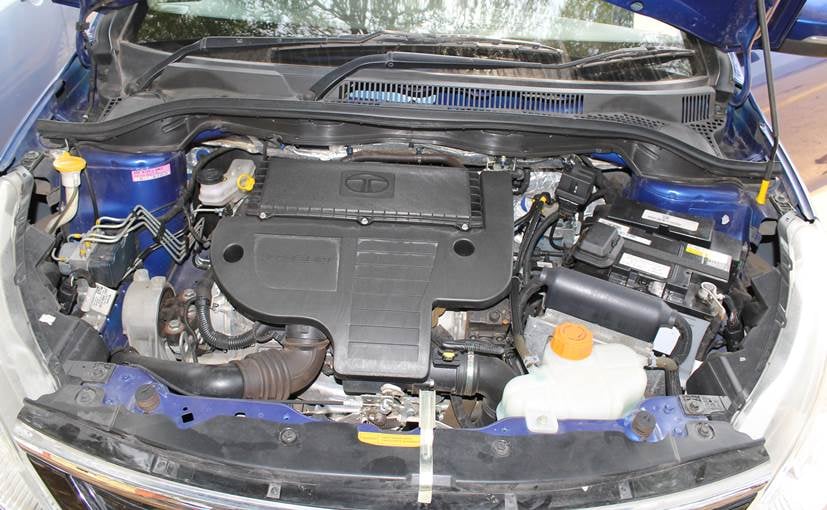 The Tata Zest comes powered by a 1.3-litre Quadrajet engine with VGT that churns 89bhp and 200Nm of peak torque, the Swift Dzire is equipped with Maruti's trusted 1.3-litre DDiS engine that makes 74bhp and 190Nm of peak torque, both of which have been sourced from Fiat and there's more. As mentioned earlier, both the Tata Zest F-Tronic and the Maruti Suzuki Swift Dzire AGS have the same five-speed AMT which is sourced from Magneti Marelli. That said, both the gearboxes are very uniquely calibrated which makes a huge impact on performance and the result of this battle too. 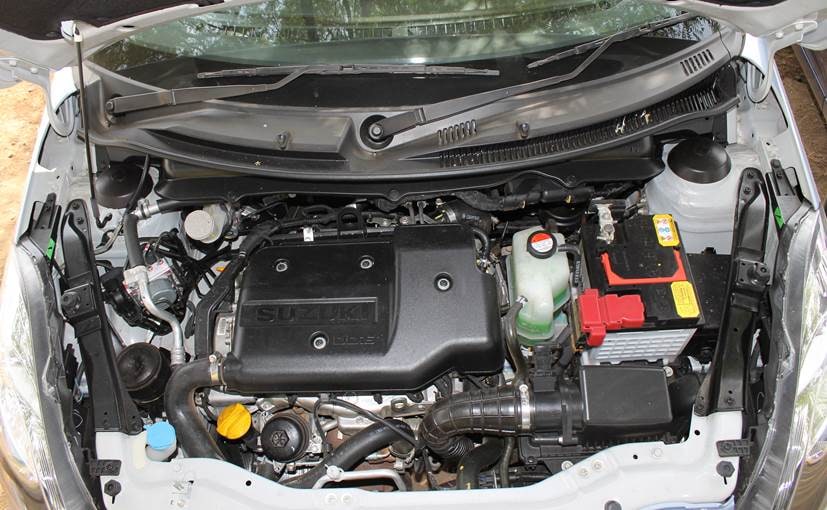 The Quadrajet engine in the Zest punches out more power, but it's available only beyond 1500 rpm. And that is a problem because gearshifts on the F-tronic system happen from as low as 1100 rpm while the car is still doing a speed of 21 km/h. So, clearly, you feel that though it is the powerful of the two, it isn't the eager one. Compare that to the AGS on the Swift Dzire and you immediately feel the difference. The gearbox is more alert and though it's got 15bhp and 10Nm torque less to deal with, it's the peppier of the two. In fact it's like those 'enthu cutlets' you find across the board, who want to be the first ones to do stuff. 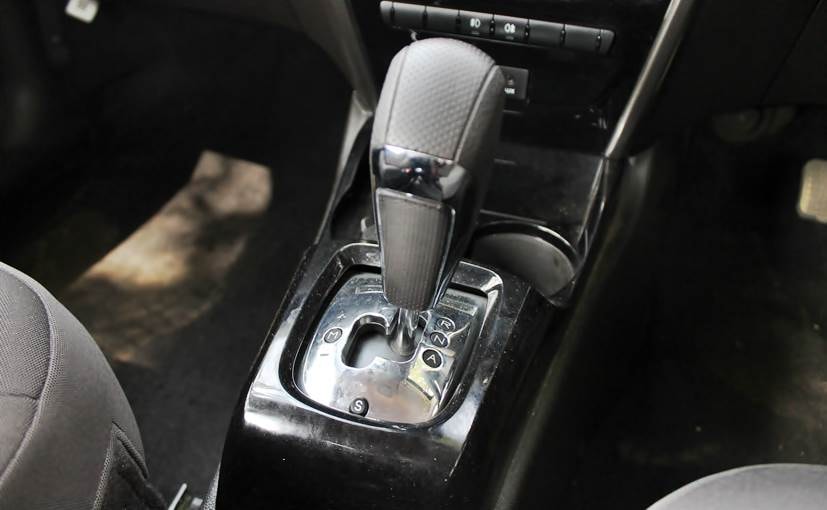 When you put the Zest into 'Drive' mode, it refuses to budge even an inch until you press the throttle which is a bit annoying, but the car has a strong mid-range and it is when you push it some more that you understand how good it really is. Put it in manual mode and it's a bit better but the engine feels a bit lethargic to attend to any of your inputs. 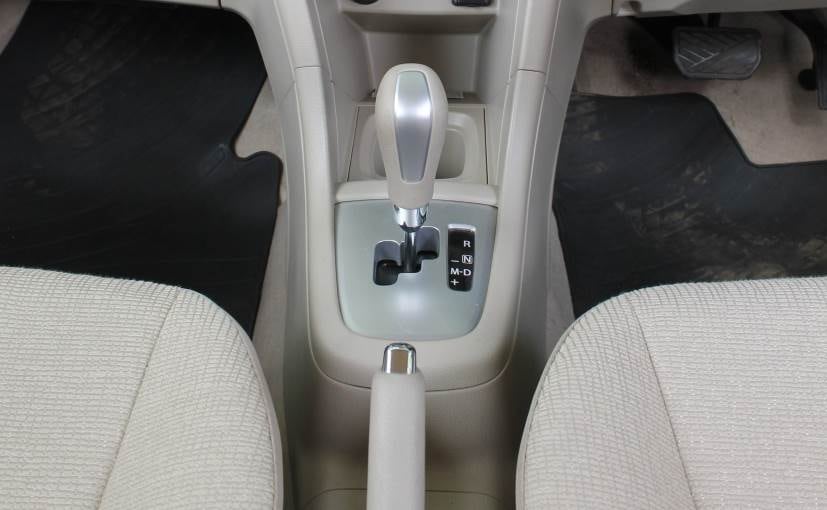 On the other hand, in the Maruti Suzuki Swift Dzire, power kicks in quite early and there is enough crawling power to get the car moving. The one place where Maruti did some fine work with the gearbox is that they have calibrated it pretty well. The power to gear ratio is better than the Zest, which makes the Dzire a much better car to drive. Moreover, Maruti has compensated for the less power by offering better fuel efficiency of 26.59 km/l as compared to the Zest's 21.58 km/l (both ARAI certified). 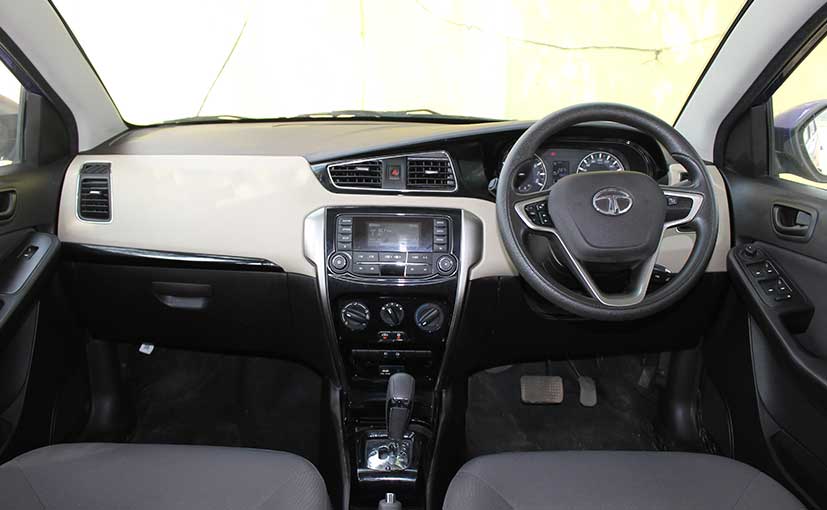 In terms interior and features, the Swift Dzire is quite at par with the Zest. While the Zest's all-black interiors makes it look premium, the Dzire's beige interiors have the same effect, in fact though the Zest offers better cabin space, it's the Swift Dzire that looks more roomy. While the Zest comes with the traditional key start system, Harman audio system with Tata's ConnectNext featuring Bluetooth and AUX connectivity and steering mounted controls, the Swift Dzire comes with an engine Start/Stop system, an audio system with Bluetooth, USB and Aux-In as well as a CD slot. 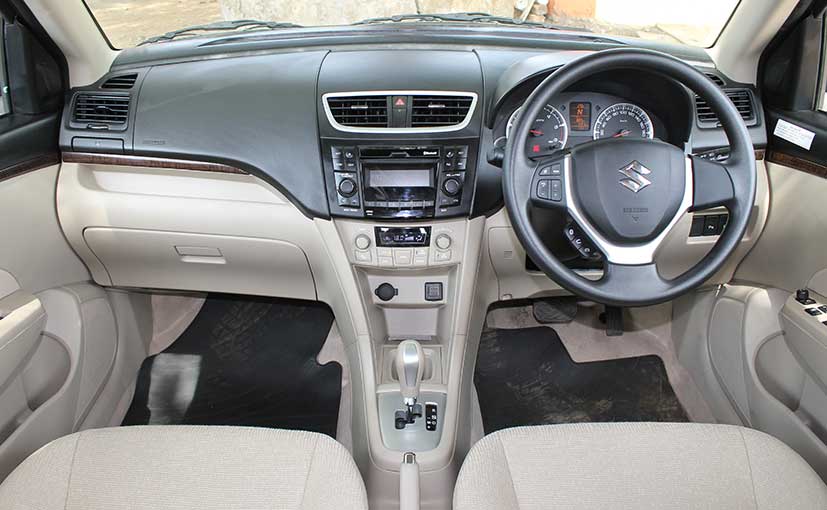 As far as safety is concerned it is the Swift Dzire that makes a much better package with dual airbags, ABS and reverse parking sensors, whereas the Zest comes with ABS with EBD, speed sensing automatic door lock and the variant we had received did not have Airbags. 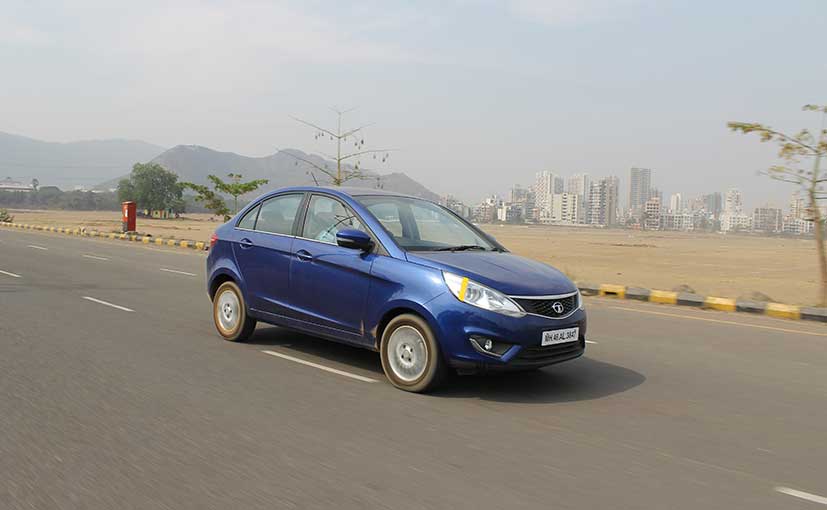 In a nutshell the Tata Zest is roomier, more powerful, offers a better music system and comes with a proportionate exterior design but we'd told you earlier that it'll all boil down to how both the cars will drive and this is where the Maruti Suzuki Swift Dzire wins. That said, the Swift Dzire AGS is priced at ₹ 8.39 Lakh , while the Tata Zest is priced at ₹ 7.02 Lakh (Both ex-showroom Delhi), which means the Swift Dzire is a good ₹ 1.4 lakh expensive than the Zest. 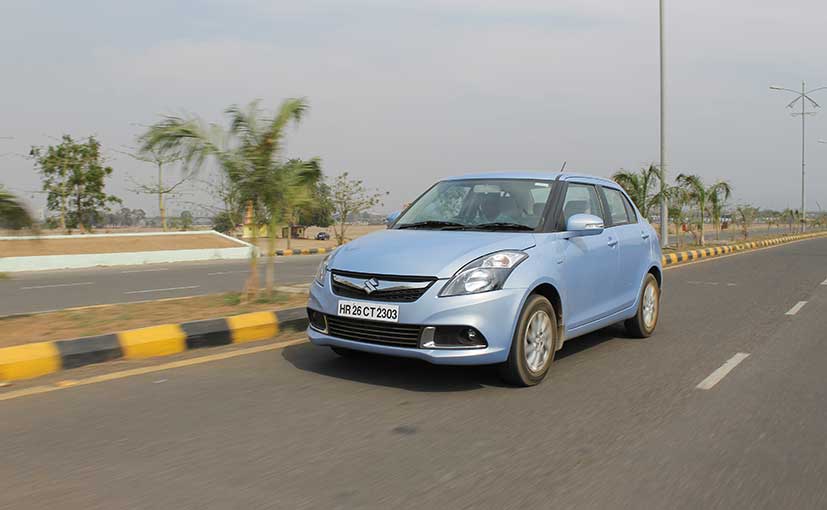 However, the Swift Dzire justifies that price tag by offering better driving dynamics and few extra features and that's the reason it wins this bout. We agree that the Zest is a big leap when it comes to a product for Tata Motors and is still a strong contender, but there are creases that still need to be ironed out. 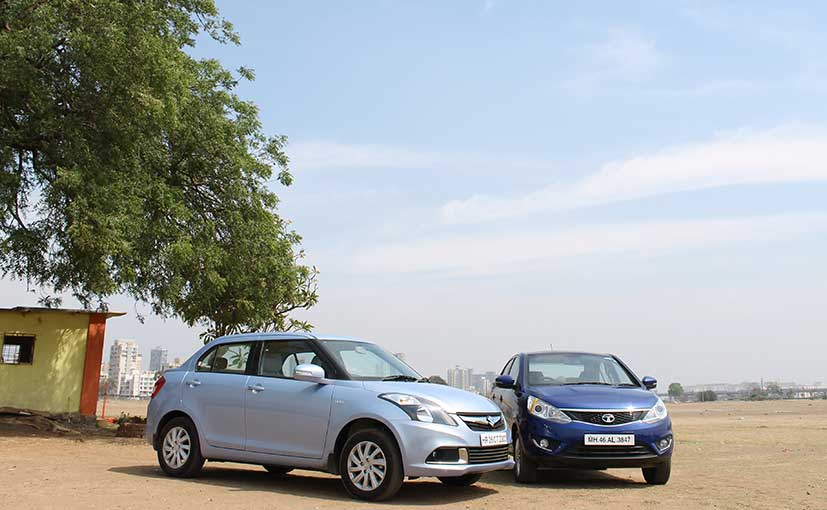