John Abraham took to social media to give his followers a quick tour of his garage, giving us a closer look at his exotic superbike collection. 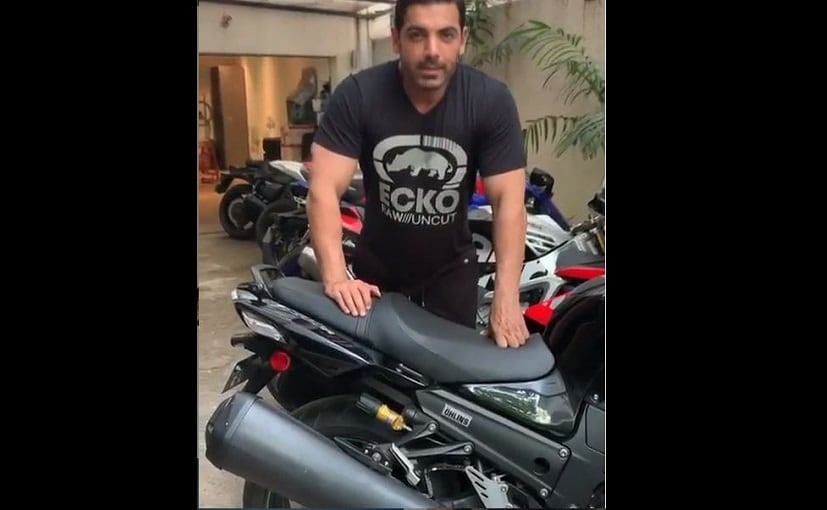 View Photos
John Abraham with his bikes, which include the Kawasaki ZX-14R, Aprilia RSV4 RF, and Yamaha R1

When we talk about celebrities and their love for motorcycles, the first name that pops in our head is none other than John Abraham. The model turned actor and film producer has always had a special love for superbikes and he has voiced it on many occasions. Recently, Abraham took to social media to give his followers a quick tour of his garage, giving us a closer look at his exotic superbike collection, which will surely make you envious of the Batla House-star.

Also Read: John Abraham To Produce And Star In A Movie About Motorcycles

John begins his tour with his Kawasaki Ninja ZX-14R, which is powered by a 1441 cc in-line four-cylinder liquid-cooled engine that is tuned to churn out about 208 bhp and develop close to 154 Nm of peak torque. The next one, of course, is the much-loved Aprilia RSV4 RF, equipped with a 999 cc in-line four-cylinder engine which makes about 195 bhp and develops 115 Nm of peak torque. John also mentions in his video that he has added an aftermarket SC exhaust system which has made the bike even lighter, from its actual kerb weight of 179 kg.

The next litre-class superbike we get to see in the video is the one we would all expect to be in John garage, given his long-term association with Yamaha - the YFZ-R1. He also mentions that it's the newest baby in his collection and that he plans to put an Akrapovic aftermarket exhaust on the motorcycle soon. The Yamaha R1 comes powered by a 998 cc four-cylinder engine, tuned to churn out 197 bhp and 112 Nm of peak torque. Next, he goes on to introduce us to his new Ducati Panigale V4, one of the most-desired superbikes from 2019. This Italian machine is powered by a 1,103 cc, 90-degree, V4 engine belts out 211 bhp and 124 Nm of peak torque from its four cylinders. The actor has also put an aftermarket SC exhaust on the bike. Interestingly, early this year John was seen riding a Panigale V4 at the California Superbike School in the UK.

John superbike collection also includes the MV Agusta F3 800, a 798 cc in-line three-cylinder liquid-cooled engine that can offer about 150 bhp and 88 Nm of peak torque. In the video, John also showcased his prized Yamaha Vmax, and the one he currently owns is the 60th Anniversary Edition bike. The bike is powered by a 1679 cc V-twin engine that makes 197 bhp and 166 Nm of peak torque.

We will soon see John Abraham's love for motorcycles translate into a movie as well, as he has announced that he'll be producing and starring in a new motorcycle-based film, which he says is about riders and human relationships. The movie was said to go on the floor later this year. As for his most recent ventures, John will be seen in the recently released Anees Bazmee's Pagalpanti.

Mahindra e-Verito
₹ 10.37 - 10.47 Lakh *
View More
Subscribe to Our Newsletter
Over 1.5+ Lakhs subscribers
Thank you for Subscribing to Us