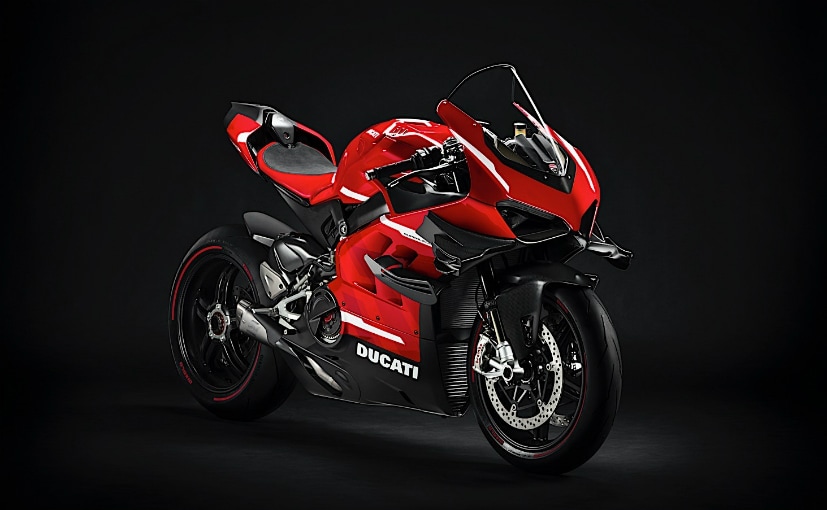 The first of the 500 limited edition Ducati Superleggera V4 motorcycles, has been officially delivered to its new owner from Belgium, Filip Van Schil. Ducati CEO Claudio Domenicali personally delivered model number 001/500 and the certificate of authenticity of the Superleggera V4 to Van Schil at the Ducati factory at Borgo Paniglae. Van Schil, who already owns nine other Ducati bikes, was invited to the Borgo Panigale factory for a special tour, in which he was able to see up close the line where his motorbike was built and meet the worker who built the engine. 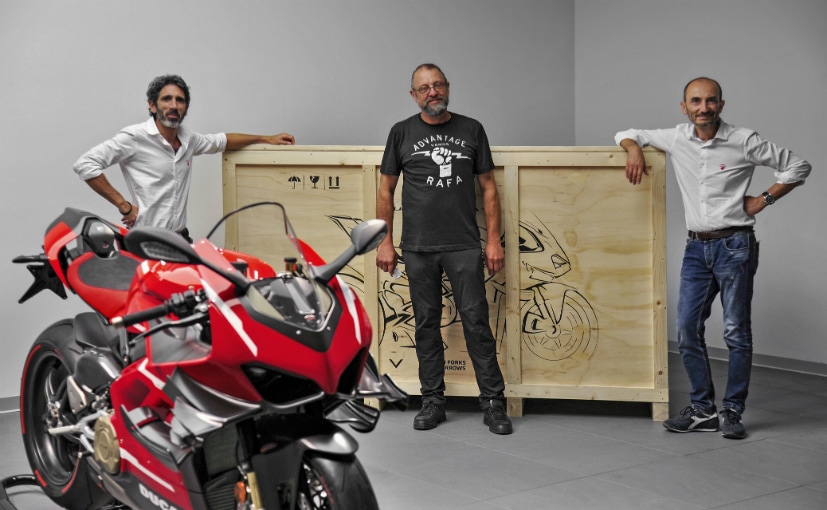 "When I received the call and the official invitation to come to Borgo Panigale to collect my Superleggera V4, the number 001 of 500, although I have always been a Ducatista, my legs trembled with emotion," said Filip Van Schil. "A welcome like this, even though I was the first to call and order the bike, is something unimaginable. Receiving it directly in the company and touching the passion of the people who work in Borgo Panigale is an experience that I will always remember. Days like this are what makes Ducati unique and different from all other motorcycle manufacturers." 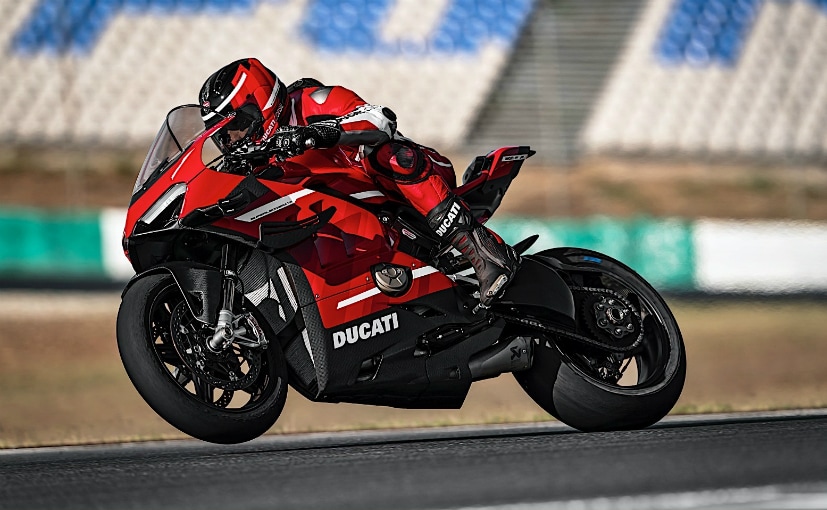 With the optional Akrapovic exhaust, the Superleggera V4 makes 234 bhp of power and 119 Nm of peak torque

The Ducati Superleggera V4 is the only motorcycle in the world approved for road use with a carbon fibre frame, subframe, swingarm and rims. The Superleggera V4 is produced by Ducati in a limited run of just 500 units, and is based on the Ducati Panigale V4, but the carbon fibre rolling chassis alone accounts for 6.7 kg weight. Going with the name, the 'super light' V4 weighs 154 kg dry and loses two more kg to 152 kg when the Akrapovic exhaust is installed. With those numbers, the Superleggera V4 has the best power-to-weight ratio from any production street bike ever built. 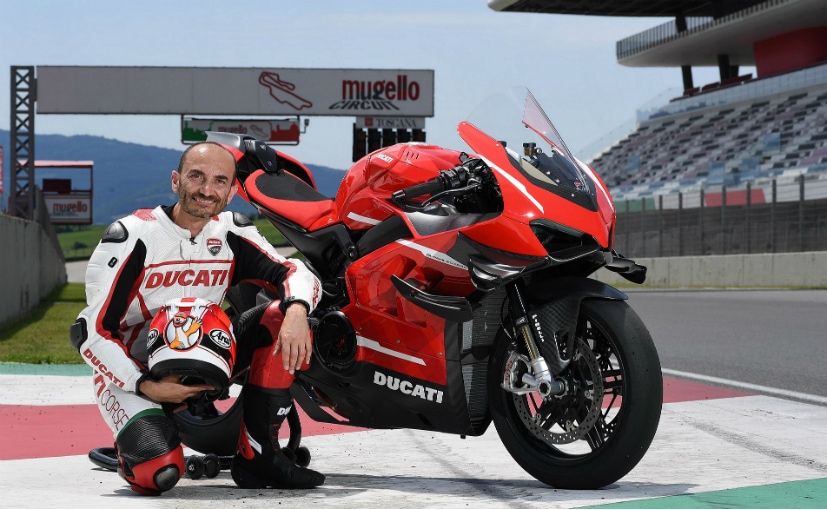 Ducati CEO Claudio Domenicali with the Superleggera V4 at Mugello

"Today is a special day. Experiencing on the track in the morning the incredible emotions that a Superleggera V4 can give at Mugello, and then handing over the keys of the 001/500 motorcycle to the first customer in the afternoon makes this day truly magical! Being able to meet and see the passion of our customers in person is always very exciting, and even more so is making them proud and allowing their dreams to come true," said Claudio Domenicali, CEO, Ducati Motor Holding. 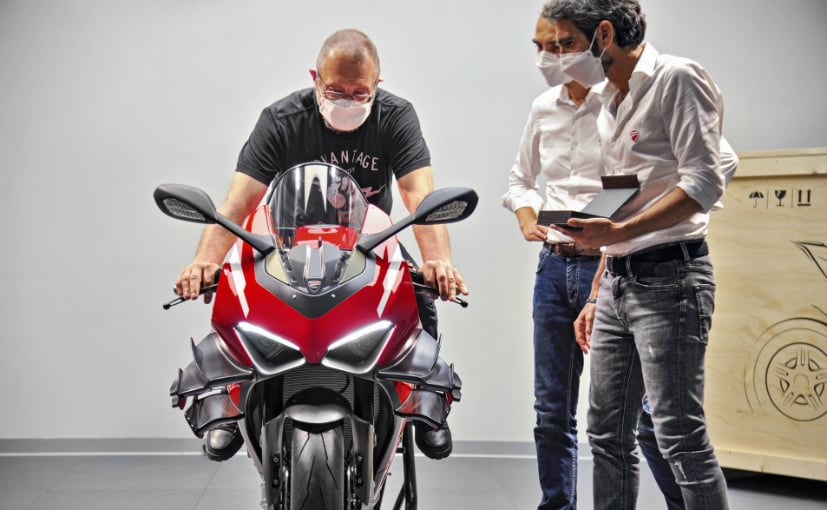 Ducati calls the new Superleggera V4 the most technologically advanced motorcycle ever, and when fitted with the optional Akrapovic track-only exhaust, the 998 cc, V4 engine produces 234 bhp of maximum power, and 119 Nm of torque. With the stock exhaust the Desmosedici Stradale R 998 cc engine makes 224 bhp of power and 116 Nm of peak torque. Pricing for the Ducati Superleggera V4 is somewhere in the vicinity of $100,000, which is around ₹ 76 lakh under current exchange rates.

Filip Van Schil, the first owner of the Superleggera V4, also visited the company museum, the Centro Stile Ducati and the Racing Department. In addition, as with all other Superleggera V4 owners, Van Schil will get an opportunity to test the Ducati Panigale V4R, which competes in the World Superbike Championship, on the track at Mugello as part of the "Superbike Experience." Additionally, 30 lucky owners of the Superleggera V4 will be able to purchase access to the Ducati "MotoGP Experience" where they will be able to ride the Desmosedici GP bike on the circuit, followed directly by Ducati Corse technicians.