In this second and concluding part of the Hyundai great drive, the i20 heads towards one of India's marvels of civil engineering, the recently opened Atal Tunnel. Beyond that we also witness the remote Lahaul valley in Himachal Pradesh for the first time in winters. 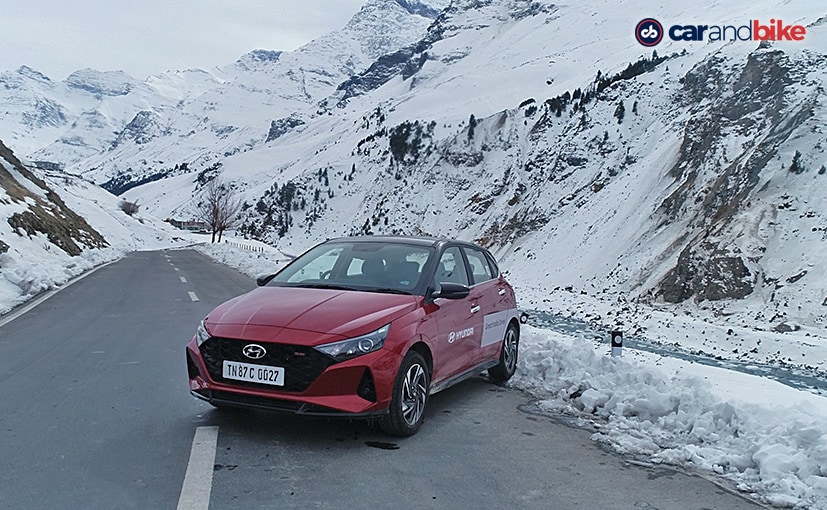 View Photos
The Hyundai i20 felt at home in higher altitudes and challenging terrains.

My travels on the 2020 edition of the Hyundai Great India drive got me to the tourist town of Manali in in the northern state of Himachal Pradesh . The theme for this years' drive was 'progress for humanity' and I was behind the wheel of the all-new Hyundai i20 trying to discover stories that stayed true to that theme. Almost two full days of driving had got me to Manali from Delhi and it was on the third day that I decided to move further up; into higher altitudes, more challenging terrains and colder climates. 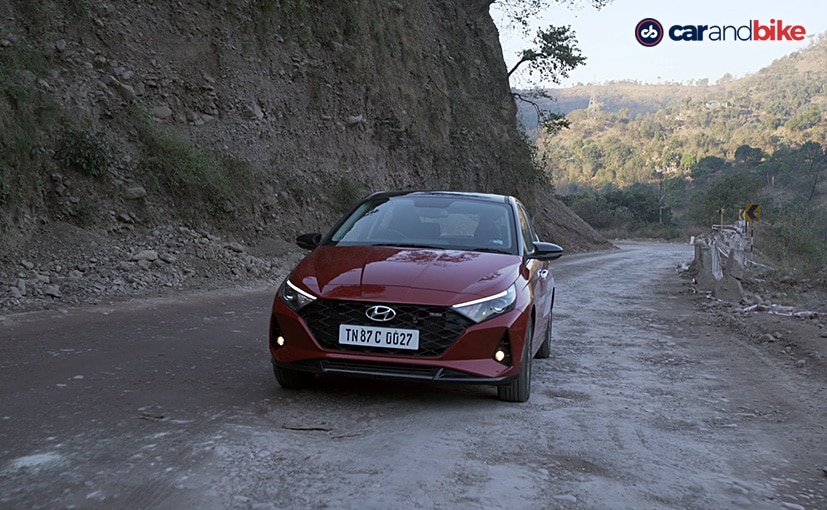 The road to Manali is broken in parts with widening work in progress.

As many of you know, a must visit place for all travelers who come to Manali is the Rohtang pass which connects the Kullu valley in Himachal Pradesh to the remote Lahaul and Spiti regions of the state. It is also the route people headed to Ladakh take and Rohtang has always been infamous to test the mettle of both the man and the machine. And to top it all during the winter the pass is closed for traffic leaving the residents of Lahaul stranded for close to 6 months every year. 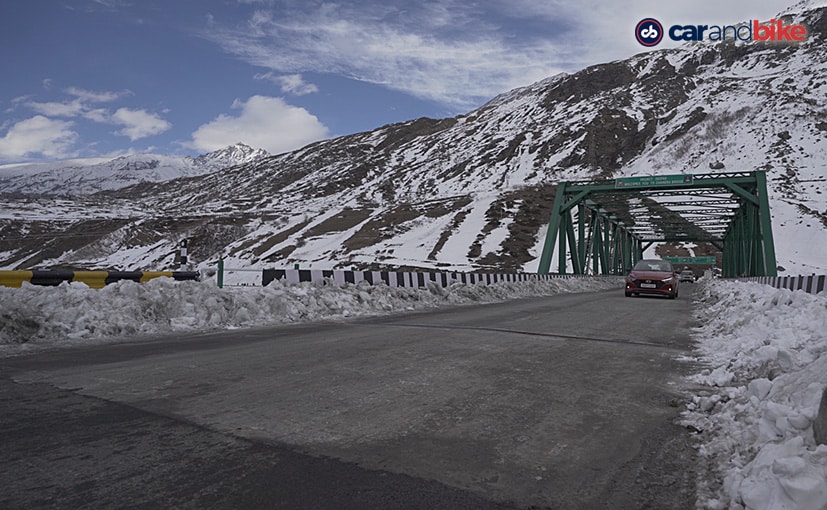 But recently the Border Roads Organisation completed what is being described as a true marvel of civil engineering, something that provides an all-weather access to the remote region and has become a lifeline to those who live there. The Atal Tunnel took more than a decade in the making, and the idea was first mooted almost 20 years ago. This was by no means an easy task which was finally completed late last year and voila suddenly the dreaded Rohtang just did not matter. 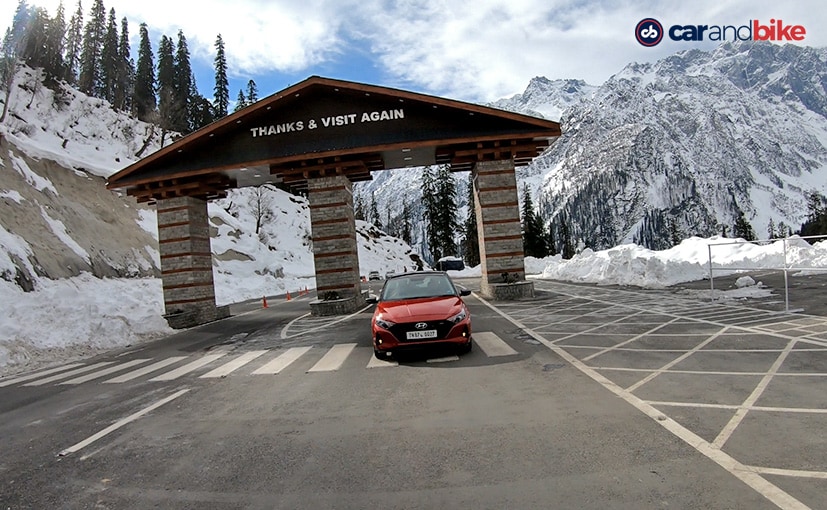 The entry point of the Atal Tunnel is an hours drive from Manali.

I started from Manali towards the tunnel. The south portal is around 30 kms from the town and the roads were in excellent condition and much wider than what I remembered from my last visit to the region around 4 years ago. It wasn't too long before I had some fresh snow for company and as it kept getting higher the amount of snow on the side of the road just kept getting increasing. Soon enough I was crossing the Solang valley that is a popular snow destination for tourists as well for paragliding enthusiasts. 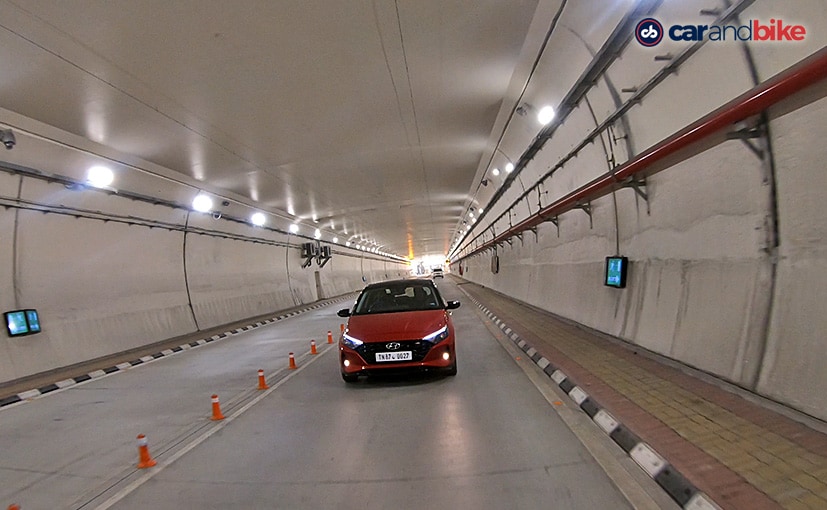 The 2 lane Atal tunnel is more than 9 kms long.

I was now driving 3,000 meters above mean sea level and it wasn't too long before I hit the entrance of the tunnel named after former Prime Minister Atal Bihari Vajpayee. This was absolutely surreal. Driving through what is the longest high altitude tunnel in the world. More than 9 kms long at an average altitude of more than 10,000 feet, these numbers are enough to make you understand the magnitude of this achievement. It surely is one the prime examples of how India has progressed in the last decade. 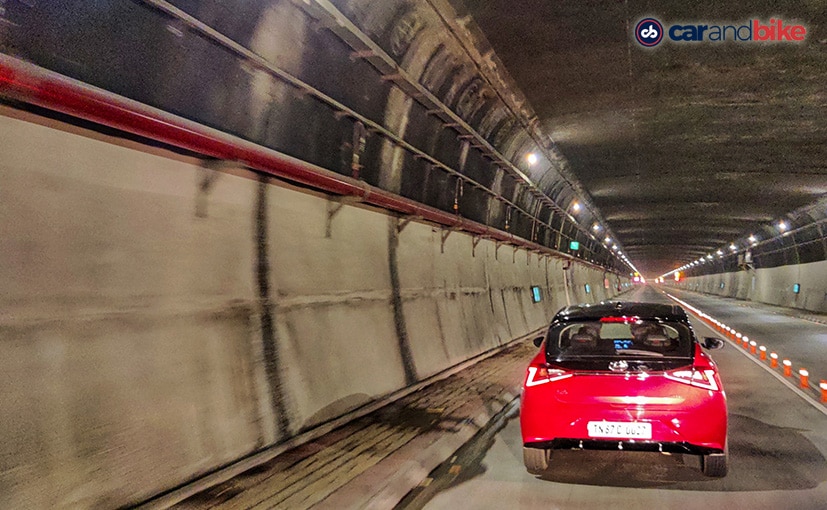 Hyundai i20 crossing the longest high altitude tunnel in the world.

The tunnel is extremely well lit and the surface is absolutely smooth. One has to adhere to extremely strict speed limits and overtaking is just not allowed as this is a 2-lane tunnel and traffic moves from both sides at the same time. As you keep driving through the tunnel it is gets very difficult to believe that you are driving in the Pir Panjal range deep in the Himalayas, the highest mountain range in the world. And it does make you realise how difficult this task must have been for those who executed it. Adverse weather conditions, heavy water ingress, collapsing roofs, the challenges were many but the brave-hearts of the Border roads Organisation just did not relent. 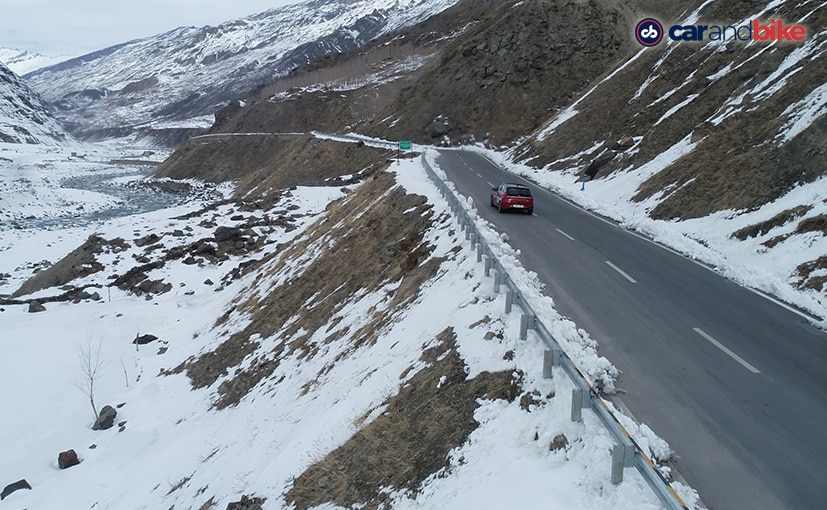 Getting to the Lahaul valley now takes just 10 mins instead of almost 4 hours.

I have crossed the Rohtang several times before and earlier it used to take at least 4 hours to get to the other side. This time it was just about 10 minutes. The exit towards the Lahaul valley was breathtaking to say the least. With snow covered mountains for company the i20 surprisingly felt at home. No high ground clearance, no all wheel drive, snow on the road but it just kept going. But yes you need to be mindful of a few things as well - use the brakes as less as possible and keep the speeds and tyre pressures low. 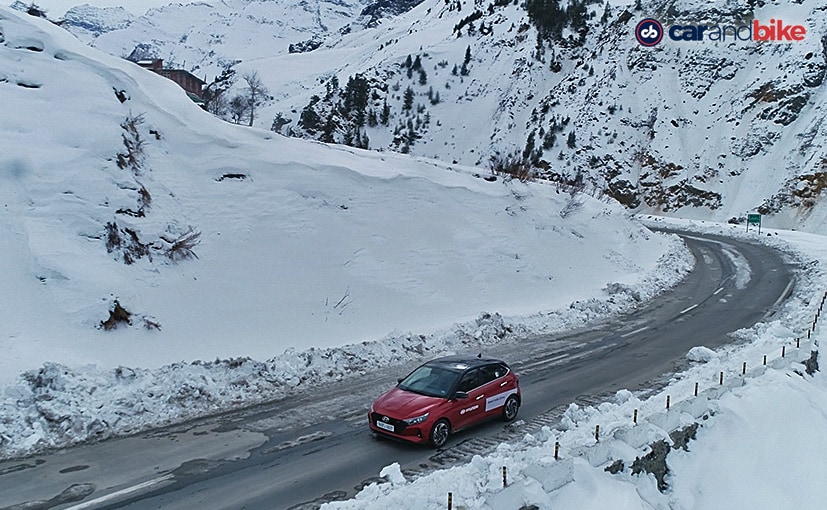 The Hyundai i20 handled the wet, slippery roads with aplomb.

This is the first winter ever where you can cross over to the remote Lahaul valley in Himachal Pradesh which otherwise used to remain cut off from the rest of the country during this time of the year due to heavy snowfall on Rohtang pass. So in a sense almost everyone who is coming here at this time is seeing in these landscapes for the first time in winters. And trust me the sights are truly breathtaking. There couldn't have been a better place to stop, soak in the views and yes capture the new i20 in all its glory. The remote Lahaul valley in winters is a photographers delight.

Not to mention how the tunnel has changed the lives of people of this region who till now used to stock essential supply before the onset of winters. But not anymore. And this tunnel has also given hope that very soon we'll have an all-weather connectivity to Ladakh which will be a boon for the armed forces as well as for essential supplies providers. But for that the wait will be a little longer. 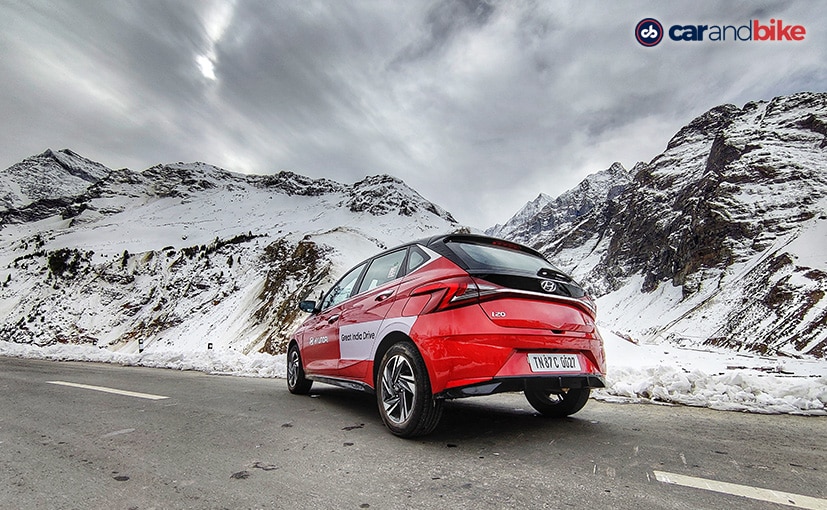 The Hyundai Great India drive culminated in the village of Sissu in Himachal Pradesh.

With deeper snow ahead I had to turn back. I knew the limitations of the driver in me as well as the car I was driving. After all this wasn't an all-wheel drive. The village of Sissu was the point of u-turn and soon enough I was back in the tunnel to marvel at it one more time before I headed back to Manali and onwards to Delhi. This ended really well, seeing India's progress in an able car and crossing the tunnel was literally the icing on the cake.