Hyundai Great India Drive 2020: Taming The Himalayas With The i20

My quest to find out some prime examples that justify progress for humanity took me towards the beautiful hills of Himachal Pradesh. Read on to know how the i20 performed and whats in store for you if you're planning a driving holiday to the hills in winters. 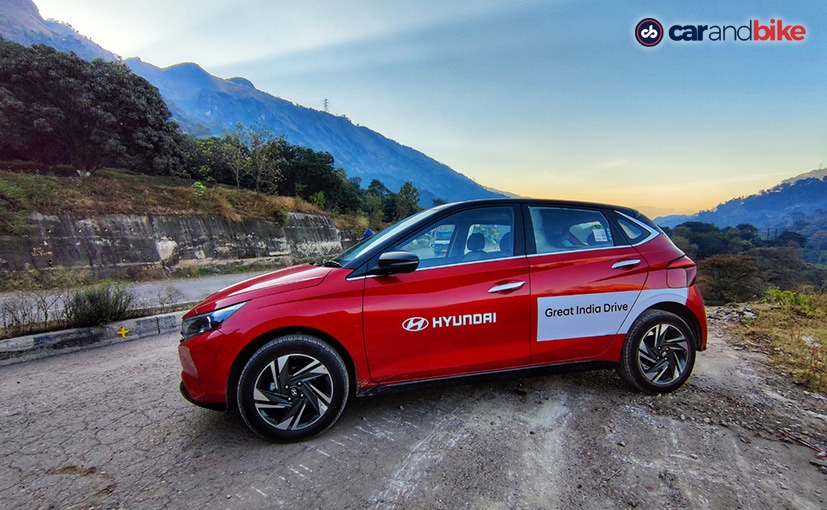 View Photos
I had the Turbo DCT version of the Hyundai i20 with me during the drive.

The Hyundai Great India drive is an annual affair where the Korean carmaker tries to showcase its latest launch in the market in a unique way. This year's theme was progress for humanity and the new generation i20 was my companion as I set out to find out just the right examples to justify that theme. The car was launched in the country just last month and has been a runaway success for the company, so naturally I was looking forward to some drive time with the premium hatchback.

The first major landmark of the journey was the Eastern Peripheral Expressway that bypasses Delhi.

I started from the national capital and decided to head towards the northern state of Himachal Pradesh. But the impending farmer's protests on the borders of Delhi meant I had to look for alternatives to get out of town. And here what came to the rescue was the Eastern Peripheral expressway. Along with the Western peripheral expressway, it encircles Delhi from all sides and has changed the way people travel in the national capital region. Combined both expressways are around 270 kms long and allow for a relaxed drive without worrying about road conditions and traffic. Yes you got to pay some toll and the distance gets a little longer but its all so worth it. 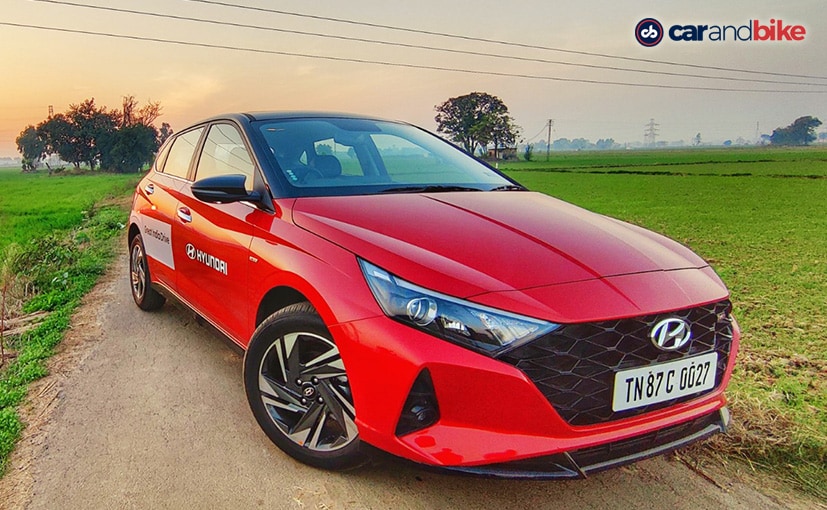 The highway from Delhi to Chandigarh has lush green fields on both sides.

Soon enough I was on the highway to Chandigarh which in a sense is a gateway to all the beautiful destinations in Himachal Pradesh like Manali and Shimla and even beyond to places like Kashmir and Ladakh. Now this highway has been under construction for a while now and till you reach Panipat you have to encounter a fair bit of diversions. Since I was headed to the hills I knew this highway in the plains was where I would cover the maximum distance in the least amount of time. The idea was to enter the Himachal Pradesh on this very day so there was a fair but of distance to be covered. The i20 had no problem in doing that. The stability at high speeds impressed me and I had no qualms with the ride quality either. 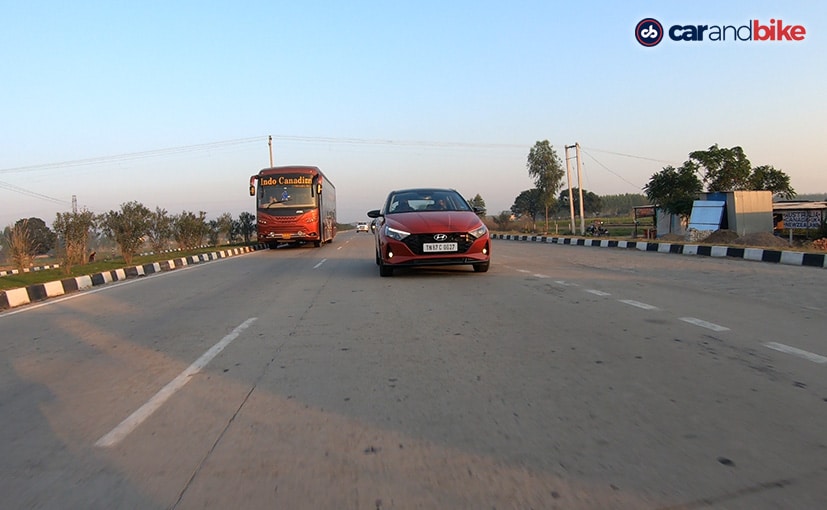 Well I still haven't told you where exactly I was headed, but honestly till then I wasn't sure myself. But there came a point at a place called Ambala on the Haryana-Punjab border where I had to take a call, because accordingly I had to turn in that direction. And chose I Manali, simply because it had snowed there a few days ago. This meant I had to bypass Chandigarh and take the highway that heads towards the iconic Bhakra Nangal dam, located in the Bilaspur district of Himachal Pradesh. But sadly it was pitch dark as I entered the hilly state so just could not get a sense of India's third largest water reservoir, also one of the highest gravity dams in the world at 742 feet. 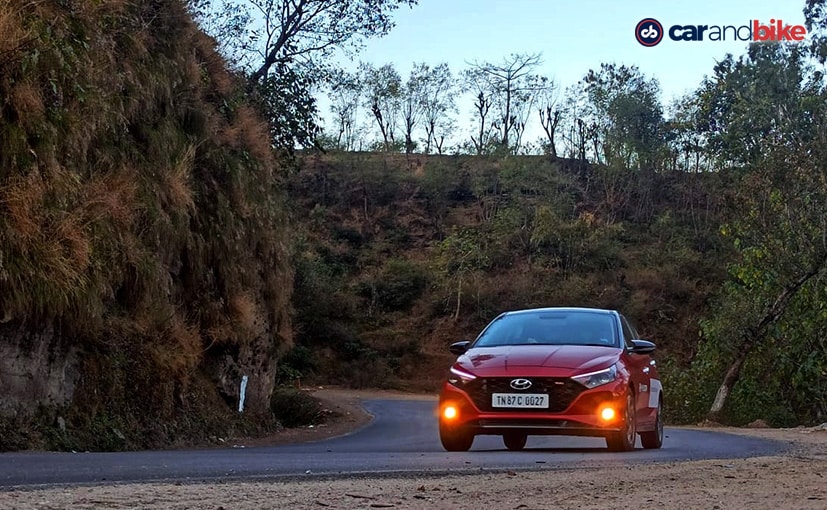 An early morning start on day 2 as I headed to Manali from Bilaspur in Himachal Pradesh.

An overnight stay in Bilaspur and the i20 marched forward towards Manali which was still a good 200 kms away. The smell of clean air was almost liberating. It wasn't actually not as cold as I thought it would be but the idea was to keep chasing the altitudes I could and till the Hyundai i20 and the weather gods were game. Providing good road connectivity specially in hills, on high altitudes has always been a challenge. But the last few years things have really improved. In fact the hill states are a huge testimony to how rapidly India has progressed over the last few years. Travels are definitely getting faster and less tiring. And that's a boon for all stakeholders. 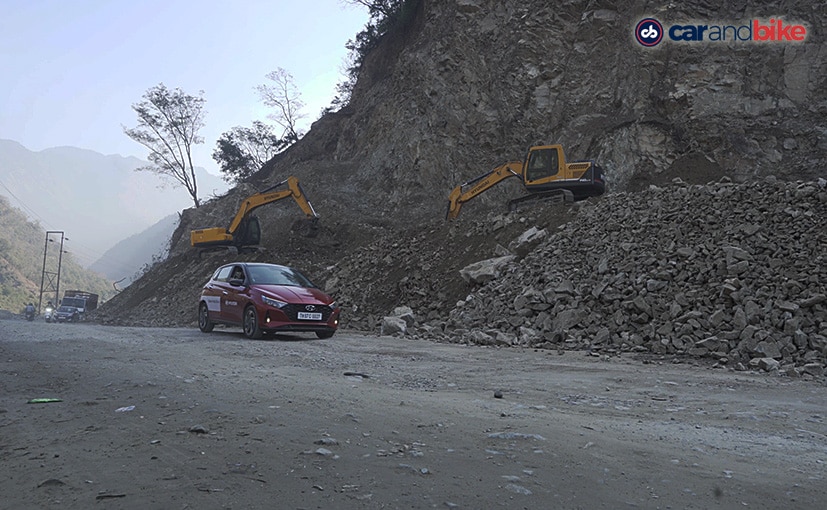 Travel times will drastically reduce once the expressway to Manali is ready.

All along the route I could see tell tale signs of how connectivity is being improved in these parts of the country. This stretch all the way to Manali is being converted into a 4-lane expressway, on the lines of the Himalayan Expressway that connects Chandigarh and Shimla. And while few parts are ready at most locations work is still under progress. That meant some broken, uneven roads and low speeds but when you're sure of a better tomorrow you don't really mind the obstacles. I knew how plush the ride is on the new i20 and suspension proved itself again on these hilly terrains. The Hyundai i20 felt at home on the winding mountain roads of Himachal Pradesh.

I headed towards the majestic Kullu valley in upper Himachal. The winding roads were inviting enough and the i20 munched miles wherever it found good roads. These long hours behind the wheels of the hatch in the hills meant just one thing. That I appreciated the car even more when it came to its dynamics. On these terrains some things really matter a lot, first an agile and responsive steering because you really have to cut corners and make do with smaller spaces. That you surely get with this car. And then I was glad I got the powerful turbo DCT version of the car here because on narrow roads full of inclines there's never enough time to overtake but on most occasions this drivetrain was able to do the job without too much difficulty. The i20 striking  a pose along the mighty Beas river in Kullu valley.

The tourist season had already begun which meant a lot of traffic was also headed to Manali along with me. This was a bit of surprise for me looking at the pandemic and the worries around it. One Of the highlights on this Hyundai Great India drive for me was driving along the beautiful Beas river in the Kullu valley. And trust me it was a tough balancing act. The choice was always between driving a great car on some nice roads and well stopping every now and then, appreciating the beauty of the surroundings and capturing some special moments. The Aut tunnel acts as a lifeline for people of Kullu in Upper Himachal.

As much as I would've liked to spend more time with the Beas, I moved on. Along the way many landmarks that have made these remote hills more accessible in the last few decades. The 2.5 km long Aut tunnel has been a lifeline for the people for the people of this region. And then for the tourists headed to Manali, the Kullu bypass has been a big boon. Crossing this congested town used to sometime take hours and now the same thing happens in a flash, within a few minutes. After this the stretch between Kullu and Manali was the best part of this drive for me. Wide smooth tarmac, lovely hairpin bends and of course a peppy car, this indeed was a driver's delight. 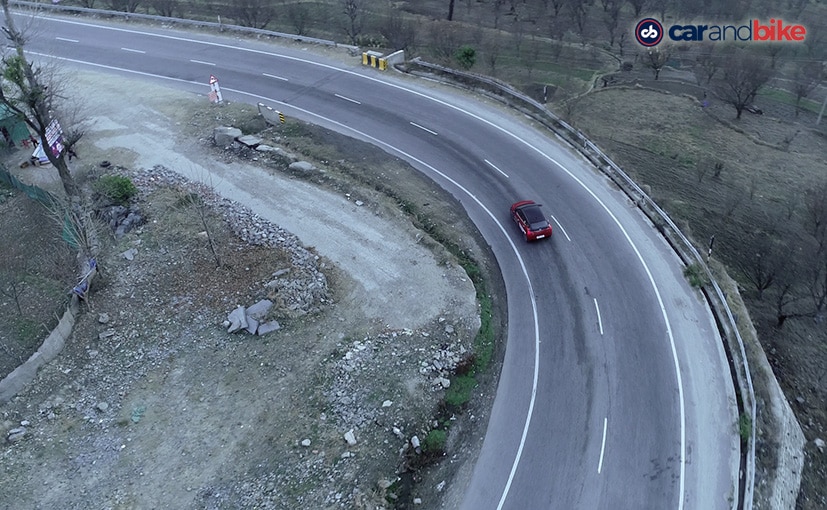 The road from Kullu to Manali is indeed a drivers' delight.

It took me a full 2 days to cover a distance of almost 600 kms between Delhi and Manali. But that included a sizeable chunk of roads under construction and well stops to just soak in the surroundings. But I wasn't done just yet. How could I come all the way and not witness a marvel of civil engineering, human resolve and pure miracle which was a just a few kilometers uphill. Yes you got it right - it was the majestic Atal Tunnel which opened just a couple of months ago to bypass the dreaded Rohtang Pass. 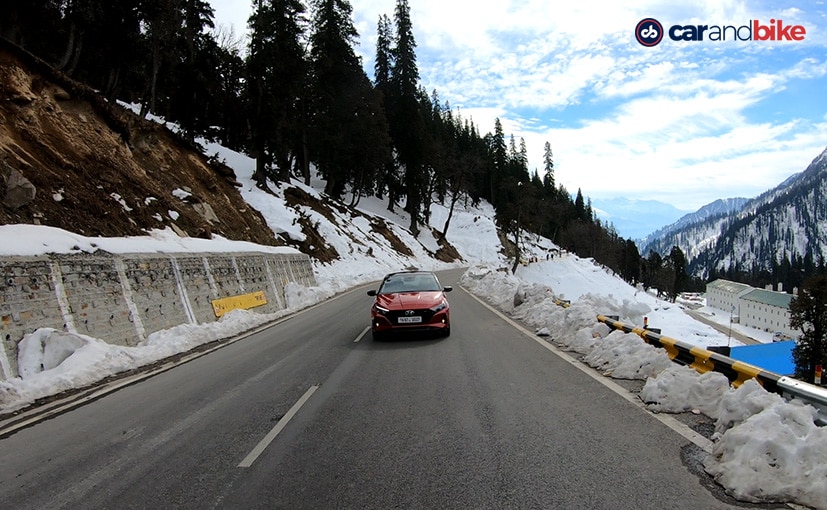 First signs of snow as I headed towards the Atal Tunnel from Manali.

Got first signs of snow as I crossed the touristy Solang valley. As I kept getting higher the car played along well and steep inclines were a cakewalk for the powerful turbo engine I was driving. The sight of fresh, virgin snow was gripping and the i20 driving through these landscapes made for a pretty picture. And in no time I made it to the south portal of the longest tunnel above 10,000 feet anywhere in the world. More than 10 years in the making, there can be no better example of progress than the Rohtang tunnel or more famously the Atal Tunnel. How was my experience of driving through this almost 9 km long marvel, what are its salient features and witnessing the remote Lahaul valley for the first time in winters? Well stay tuned for that.