Patent images filed by Kawasaki have emerged which show a hybrid motorcycle, with both an internal combustion engine and an electric motor. 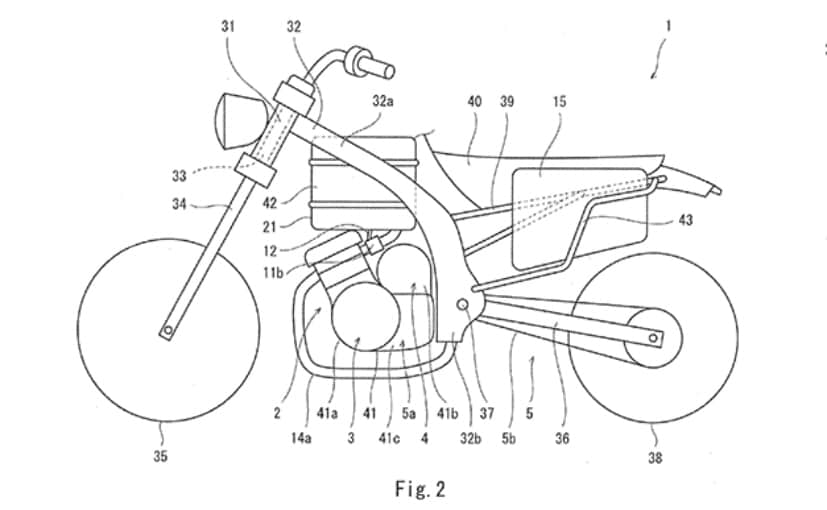 The patent images filed by Kawasaki describe a motorcycle equipped with both an electric motor and an internal combustion engine. The illustrations show a parallel hybrid system, which means the engine and the electric motor work together to deliver power to the rear wheel. The concepts also work in a series hybrid mode, where only the electric motor provides the driving power, while the internal combustion engine acts as a range extender. A split hybrid system is also described in the filings. According to the patent images, the AC electric motor, internal combustion engine and transmission all form a single unit, sharing the same casing. The battery is located above the engine where the fuel tank of a conventional motorcycle would be located. In this configuration, the fuel tank is moved to the side of the seat, or even outside the frame beside the battery. And to make the weight balanced, the coolant tank is placed on the right side of the bike. What this ensures is that the heaviest parts of the bike, like the electric motor, combustion engine and transmission are placed low down, closer to the centre of gravity.

While the patent images were filed sometime back in Japan, and around a year later in the US, these are by no means any confirmation that Kawasaki will be in fact releasing a hybrid motorcycle anytime soon. Patent filings only reveal the R&D efforts, and isn't a guarantee ever that a production model based on such filings will be launched anytime soon.