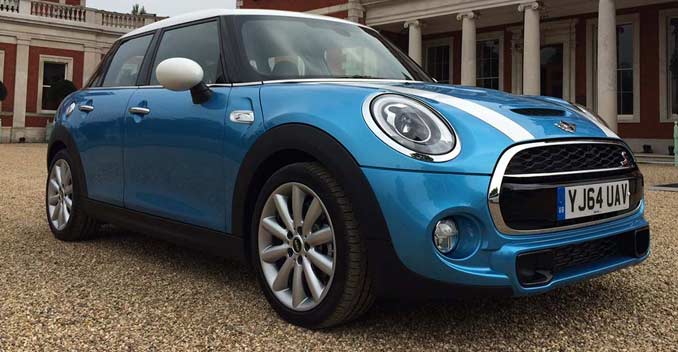 Yes, that sounds confusing, doesn't it? Almost an oxymoron. Well it isn't, because when it comes to stretching, the BMW-owned British brand has been doing that for a while - beyond the boundaries of what a MINI was supposed to be anyway! Now the idea is simple enough. Good business sense demanded that the quintessential 3-door hatchback went 5-door to be able to compete more effectively with the likes of the Mercedes-Benz A-Class or even the VW Golf.

So with the 3rd generation, the plan was to make history and drive in a 5-door hatch for the first time. The new body style is, therefore, an all-new MINI variant, since the brand never did have a 5-door before. No, I am not counting the other body styles like the Countryman or Clubman; I am only talking of the pure MINI hatch, if you can still call it pure that is.

The car I drove a few months ago in Puerto Rico, the new 3rd generation MINI has been stretched by 161 mm, 72 mm of that goes into an elongated wheelbase. I am comparing, of course, to the new 3-door MINI. Anyway, the rest is in the rear cargo space and bumper. The car still has relatively short overhangs but yes, it looks stretched. Given that the MINI was always supposed to be a taut, go-kart-like compact car, with the wheels all the way out, I have to say the obvious stretching of the design is disappointing to me.

However, the overall looks haven't changed. The styling is in-line with the new generation, and so the second car on this new platform, maintains the new family-look, which includes the new horseshoe-like signature daytime running light motif, the new front grille and rear hatch + tail-lamp treatment. The car is very well finished, and the extra muscle added to its flanks and fenders is also rather well done. The two rear doors, also do look well melded into the design overall.

Its only when you see the car driving away from you, the rear 3/4ths that is, that you feel, "Hang on! That looks stretched." The car stays under 4 metres (3982 mm), though the SD version goes just over the line at 4005 mm. It is available in 3 variants like its 3-door sibling: the MINI One, MINI Cooper and MINI Cooper S. Throw in a D for the diesel variants.

That said, the MINI COOPER SD 5-door is the car I have had the chance to drive around in extensively. The first impression is that the car instantly feels heavier and bigger to drive. It has the sense of a large hatch, and yet maintains its precise handling and steering qualities that a MINI has. The diesel unit is responsive and has a lot of grunt; you can throw it about a bit. The car definitely drives best in the Sport mode, though some flashes of good sense had me staying in the Mid and Green modes too!

The throttle response and gear shifts in the Sport mode are clever and the car tends to feel way more agile as compared to how you feel when you have just started driving it. It tightens up quite nicely, especially the steering response and the damper settings, and finally gets close to the promised go-kart ride feel that's promised by the brand.

The diesel unit is a bit noisy though, but rev it and it growls just as wonderfully! The paddle shift is also the more fun way to drive this transmission, and the winding, sometimes bumpy roads of Oxfordshire were perfect testing ground for the new car. In fact it is on such roads that you realise how the car is not quite as direct as the previous MINI hatches. It is not soft by any means, but the longer wheelbase makes for a more comfortable ride quality - something the Indian buyer will appreciate.

Interesting fact about MINI in India is that even though the Countryman diesel is locally assembled, and hence is the least expensive MINI you can buy, the imported hatches are selling at similar levels. Which is why bringing the 3- and 5-door MINI to India is now a priority for BMW India. The car will arrive on our shores by late October or early November as a direct import. Expect the diesel Cooper SD variants first, and we may then get the petrol Cooper S too, but only in 2015. Prices will likely be in the Rs 30-35 lakh bracket.

Check Out the Image Gallery Here