The Avan Xero+ is a new electric scooter from Avan Motors and it is primarily meant for short commutes especially for college-going or elderly people. We spent a day with it to see how it tackles the Delhi traffic. 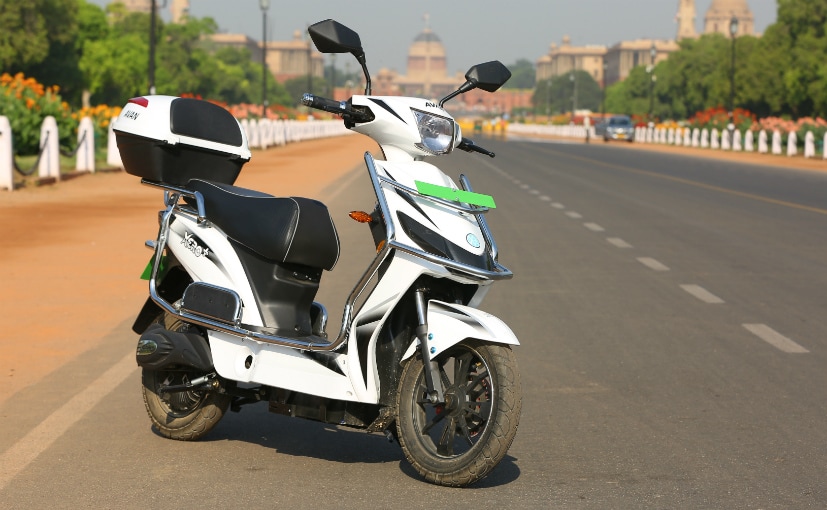 With a definite push towards electrification, the number of electric vehicle manufacturers in India is slowly going up. And one such new EV startup is Avan Motors. It started operations in 2015 and recently launched a new electric scooter called the Avan Xero+. The Avan Xero+ is the company's flagship model and we spent some time riding the electric scooter in Delhi to see whether it can be an eco-friendly and a viable option instead of a regular petrol powered scooter. 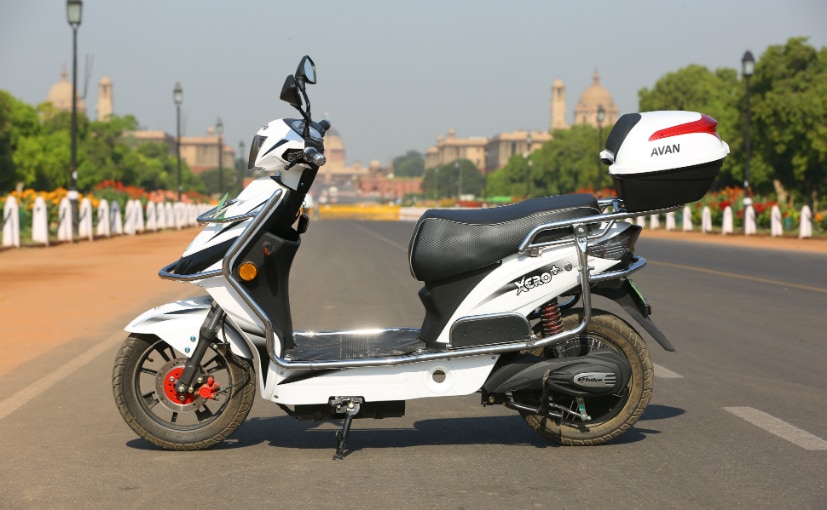 (The Avan Xero+ has a simple design with universal appeal )

The Avan Xero+ has narrow, compact dimensions and has a clean, no-frills design. The front apron gets a black band which adds visual relief and halogen headlamp is mounted on the handlebar in typically scooter fashion. Interestingly, the LED turn indicators are mounted on the inside of the apron and not up front or on the handlebar. But it doesn't look bad. Viewed in profile, the scooter's tiny dimensions become even more prominent. The side panels with graphics offer a hint of sportiness in an otherwise staid design. The top box on the scooter is a standard fitment and it makes the scooter more practical even if doesn't add to the overall looks. Overall, the design is conventional and will appeal to a larger audience. 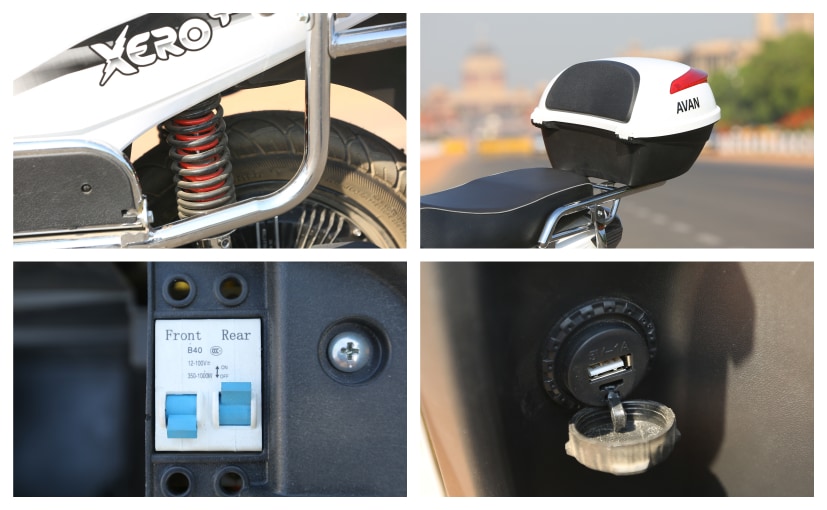 (As far as features go, the Xero+ isn't fully loaded, but it gets the job done)

The simplicity of the scooter is felt when you scan through the features list as well. It gets a plain digital instrument console which displays information such as range, battery, speed etc. The panels are made of plastic and therefore, the body is susceptible to dings and scratches even during daily running. Keeping that in mind, Xero+ gets a metal frame around the body which acts as a crash protector. 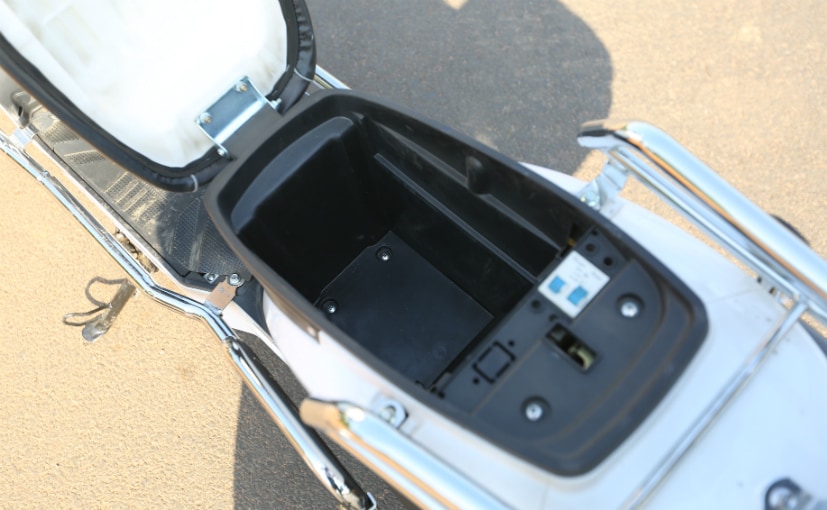 (The underseat stowage is rather small and can fit in small, sundry items. No space for even a half-face helmet)

You also get an USB port for charging your mobile phones but there is no pocket or sleeve to keep it, which is a miss! The underseat stowage too is quite small and you can fit in two loaves of bread along with two packets of milk at best! As far as braking is concerned, the scooter gets a disc brake and a drum unit at the rear. It gets telescopic suspension up front and regular coil springs at the rear. 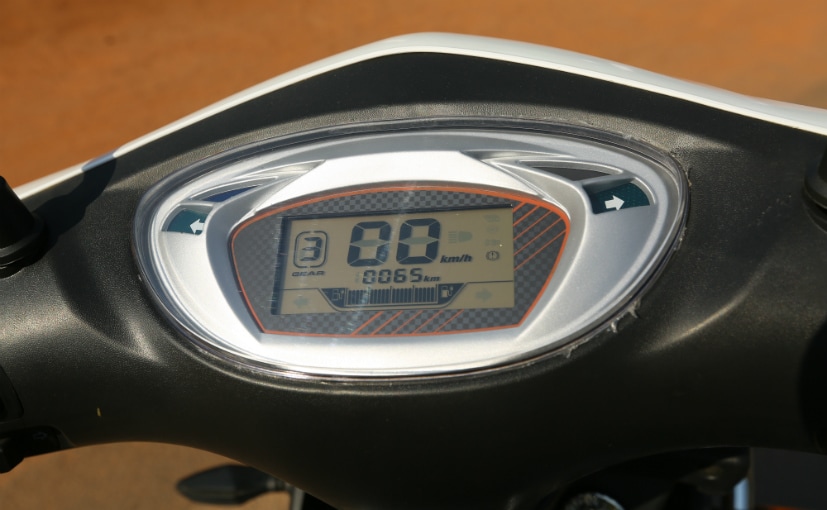 (The digital display is simple and shows information such as speed, range, battery levels and so on)

The Avan Xero+ gets an 800 watt brushless direct current motor along with a 24 Ah lithium-ion battery. This means that the scooter has a range of about 110 kilometres with the dual-battery pack and about 50 kilometres with the single battery pack. Top speed is just 45 kmph, which we figured is a comfortable speed when riding in the city, but you will be stuck with the slower lot in traffic. The Xero+ weighs a measly 85 kg which means it can be easily ridden by people of all age groups. The lithium-ion batteries are mounted under the floorboard and are removable as well, meaning you can recharge the batteries at your home or your workplace as well. Avan says that the battery can be charged fully in about 6 to 8 hours.

How are the riding dynamics? 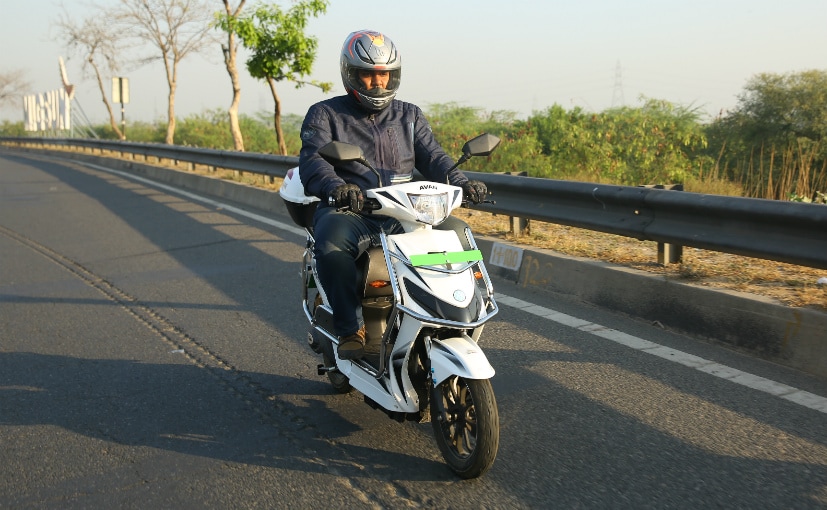 (The scooter has a top speed of 45 kmph, which is good for city commutes )

The Xero+ feels quite light and nimble and therefore, filtering through heavy traffic is a boon. But one has to be extra careful because the low, whirring sound of the electric motor means you will encounter all sorts of obstacles on your way. Motorists changing lanes without seeing, people walking across your path and so on! India is yet to warm up to noiseless EVs and you feel this sense of apathy from other motorists when they see you riding an electric two-wheeler. With a top speed of 45 kmph, it really doesn't leave you much of an opportunity to explore the handling capabilities of the scooter. The scooter will get you from point A to point B at minimum cost and if you are not in a tearing hurry. In case you want to change directions quickly, the scooter is game for that! We weren't big fans of the ride quality though. It is stiff and going over potholes, bumps and flyover joints, you will feel all of it up your spine. A softer suspension would have gone a long way in offering a comfortable ride. 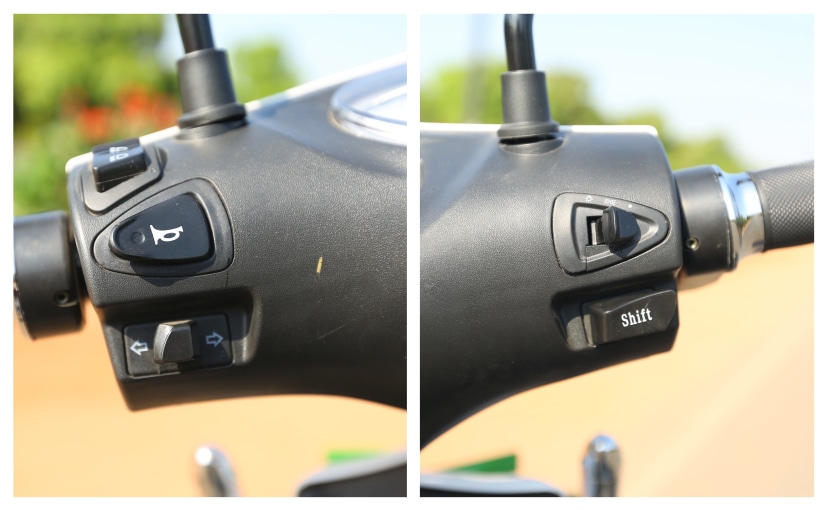 The right switchgear on the handlebar has a button marked 'shift' which acts as a gear knob. So what it actually does is acts as a low range gearbox, which works well in case you want to climb up a flyover with a pillion or some luggage, offering more pulling power. There are three gears and if you want to cruise at 35 to 40 kmph, the third gear works best. The scooter is rated for a 7 degree gradient, which means it can climb up a slope of 7 degrees without a hassle. It carry a maximum weight of 150 kg. 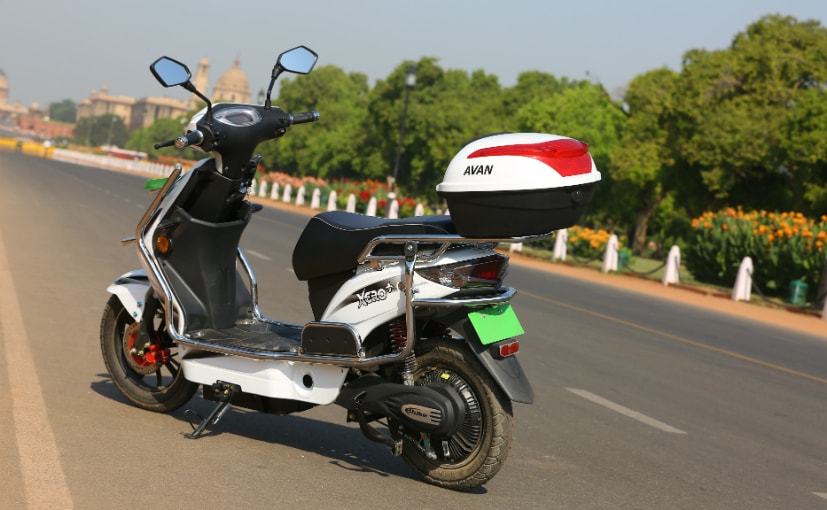 The Avan Xero+ makes perfect sense for college-goers, housewives and elderly people. It is a good mobility option if your daily commute is short and you want to do your bit for the environment. The scooter is priced at ₹ 47,000 for the single battery option and ₹ 55,000 for the dual-battery option and will rival the likes of the Okinawa Praise and the Ridge Plus, which is again a good option to look at. Yes, it is as expensive as other ICE scooters and may not offer similar levels of performance but its biggest USP is clean mobility and low cost of ownership.

New-Generation KTM RC 200 Spied Testing
Subscribe to Our Newsletter
Over 1.5+ Lakhs subscribers
Thank you for Subscribing to Us