Lexus has decided to bring in some units of its smallest crossover SUV to India for testing. The Lexus UX is the only EV model from the Japanese luxury car maker. So how does the first all-electric Lexus drive? And should it be launched here? Read on and decide.
By Siddharth Vinayak Patankar 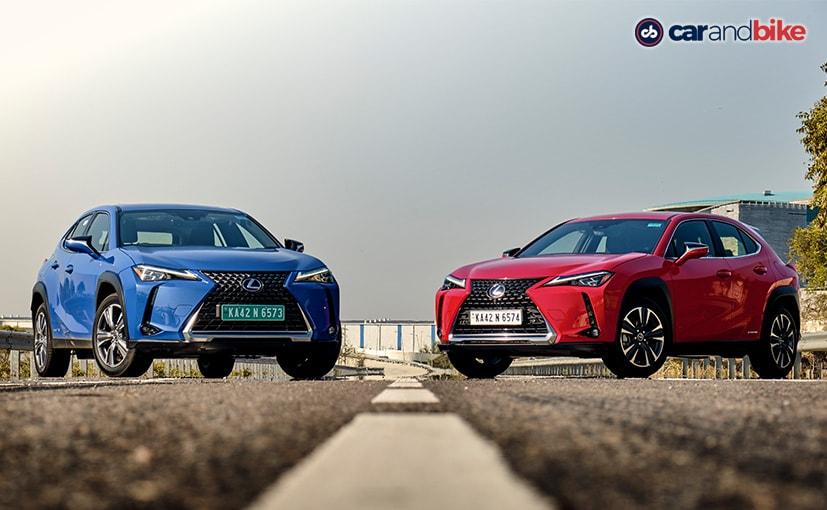 Lexus is still finding its feet in India. But in the past few months we have seen a sharper, renewed focus that aims to take the brand into higher gear here. The new second generation hybrid Lexus NX crossover SUV is a big part of that. But Lexus is also planning ahead for further electrification. Enter this car. the baby crossover from the brand - the Lexus UX. Named so for being an 'Urban Crossover', the model has already been quite popular as the entry car in the Lexus range. But this model also has a special variant. When the Lexus UX first debuted at the 2018 Geneva Motor Show, I remember being really attracted to this car styling. Lexus was undergoing its big design transformation, and I think the UX really embodied that. It's very sharp, and packs a lot of edgy design elements into a tiny crossover footprint. making the car look really hot. But I'm not going to talk more about styling because it's not like this car is being launched here, is it? 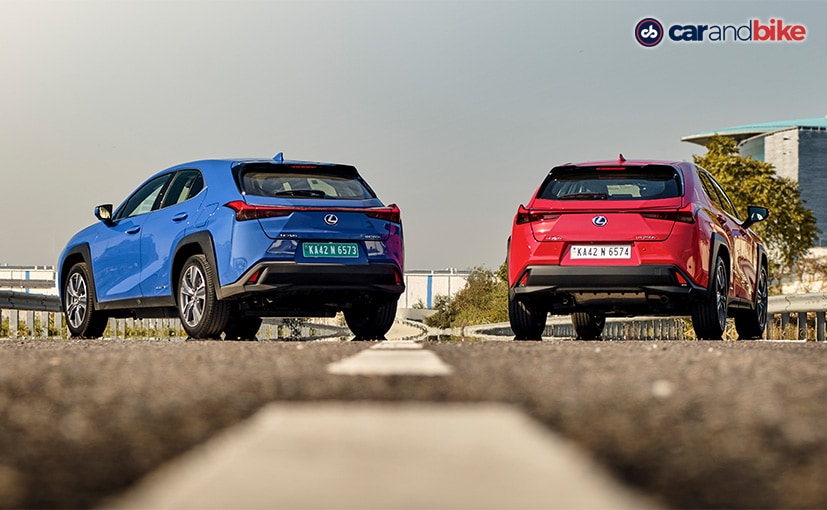 The Lexus 300e is the first electric vehicle (EV) ever from the Lexus brand while the Lexus 250h is a self-charging hybrid.

I do have two of them with me - one is the car you'd expect from Lexus - i.e. the self-charging hybrid model - dubbed the UX 250h. The second is the new baby in the Lexus global lineup. It's the 300e fully electric or EV version of the UX. Yes, the first electric vehicle (EV) ever from the Lexus brand. Both cars are here to gauge interest and test their capabilities in Indian conditions. This is just step one of where Lexus would take its EV strategy for India. So these are not launching anytime soon. But the car itself interests me a great deal. And naturally I will focus on the EV. 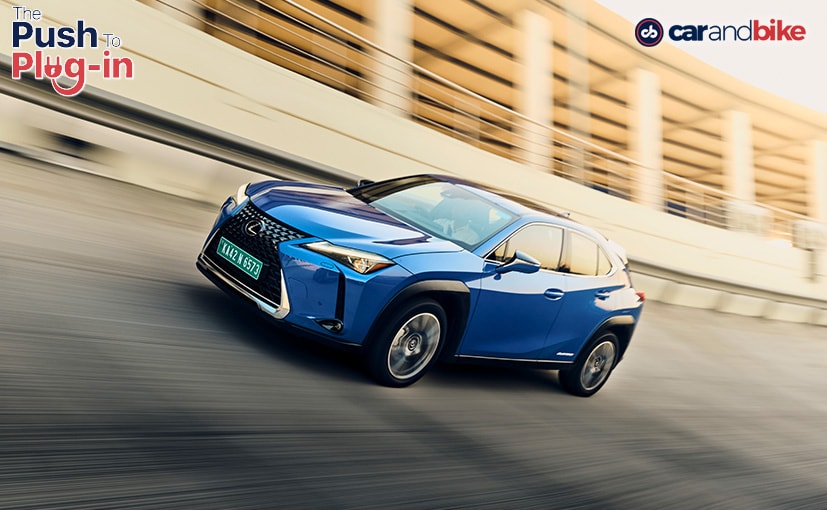 The UX 300e uses a 54.35 kWh battery on the floor pan and a conventional 150 kW permanent magnet motor at the front that replaces the engine. It goes 315-400 kms on a full charge - which is a good range for a compact city crossover. The total power output is a good 201 bhp and you get 300 Nm of all-time torque availability. It goes 0-100 in 7.5 seconds and its top speed is around 160 kmph. Numbers aside it all translates in to a zippy and fun driving experience. To give myself the true comparison, I jumped into the self-charging hybrid first. The 2-litre petrol engine in the Lexus UX250h is well mated to the 216 V battery.

The Lexus UX 250h makes a generous 150 bhp, it is light and quick, and the 2-litre petrol engine is well mated to the 216 V battery. The E-CVT gearbox also works quite well, and the generous 2640 mm wheelbase gives the car tremendous sporty potential when pushed. It can go to 177 kmph. That done, it was time to board the UX 300e. And instantly the car felt different - as it should. When you come off of a petrol diesel or even a hybrid, of course an electric straightaway feels silent and smooth. Once you get past that, you begin to actually assess its performance. The UX EV needed to be sporty and dynamic, keeping performance at its heart because the segment is dominated globally by racy compacts. So to really test that I'm glad there are two things at my disposal. The first is an empty track, and the second is a credible sport mode on this car. I had the two cars to myself all day at the ICAT track outside New Delhi. It really allowed me quality time with both, and uninhibited driving. Lexus may have gone with a conventional EV setup - but being the company's first all-electric and being based on an existing ICE model platform - I think that was a wise decision. The Lexus UX really does well as a sporty crossover. And where it may lose out on commanding SUV height, it makes up with hatch like agility that's a treat to drive.

The UX has three distinctly different and expected drive modes - normal, sport and eco. The latter is best for eking out the most range, but you can still push the car, or get quick enough acceleration for overtaking manoeuvres etc. But put it into sport mode and the thing really takes off. And being on the track because I can tell the differences between modes much better than in traffic. I'm very impressed with the car's firm ride quality and handling. It really does well as a sporty crossover. And where it may lose out on commanding SUV height, it makes up with hatch like agility that's a treat to drive. The UX 300e is also incredibly silent. Sure all EVs are, but this one more so. The brake regeneration isn't as solid as it is on other EVs and even at its highest setting the regen isn't enough to enjoy complete single-pedal driving.

The glass surfaces, wheel arch liners, and overall road noise damping are fantastic. And it lets you hear the EV propulsion in action better. That sound is very nice on this one too - as sci-fi and futuristic as you'd expect. The brake regeneration isn't as solid as it is on other EVs - meaning you can adjust the stages using the paddle shifter, but even at its highest setting the regen isn't enough to enjoy complete single-pedal driving. 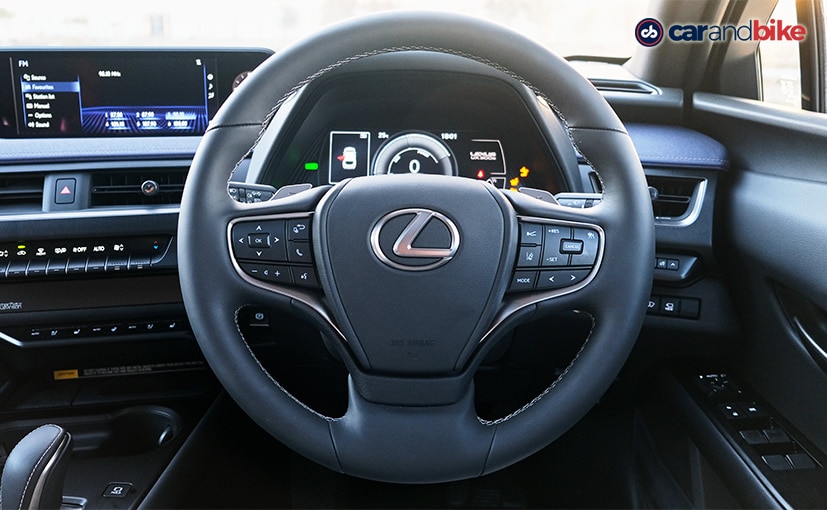 On the inside, the plastics come across as solid, and the design is very different

On the inside the UX is reasonably well appointed. The plastics come across as solid, and the design is very different. I especially like the instrument binnacle with that turn knob on the side for the drive modes. The displays are also modern, and the connectivity and infotainment are on point. Space wise of course the cabin is compact, but then that is the segment the car has been designed for. And on safety too, the UX comes fully loaded. 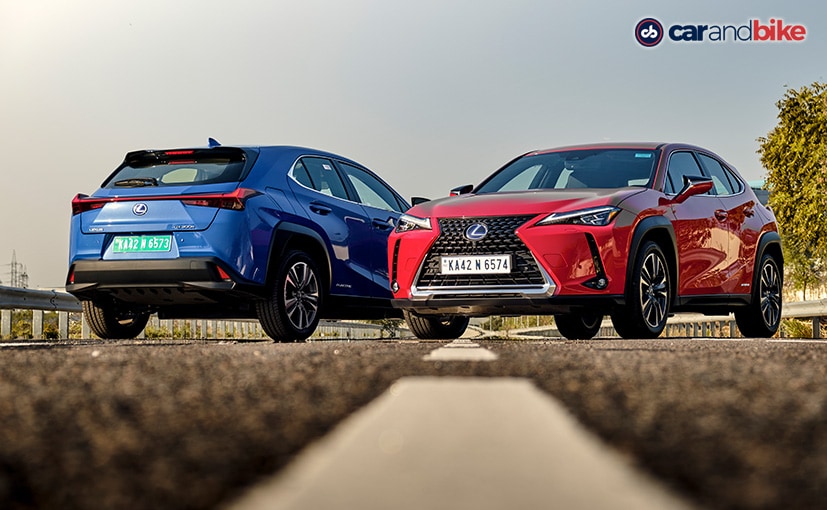 The car gives you the sense of being low to the ground and fun to drive.

Overall, the performance comes across as really taut. I like the fact that the steering feels stiff and precise, and the car gives you the sense of being low to the ground and fun to drive. The only problem is that for India, the UX may not work from a price equation point of view. It is a small car relatively speaking, and so for now Lexus will focus on the NX which is one size bigger. But I still feel there is room to compete with the likes of the MINI electric or even the upcoming Kia EV6 and Hyundai Ioniq 5. If Lexus brings the UX 300e in limited units, it should still find a steady slew of takers who will be willing to spend big for a fully electric, stylish luxury brand EV offering.