Motoring journalists have it made. Travel all over the world and drive around in fancy cars or ride cool bikes. How cushy is that? Right? Now my ilk and me will waste plenty of breath trying to combat this false perception - and defend the hard work that goes with it. But when you get invited to the Caribbean, to test one of the world's most anticipated and fun cars - well then you have simply got to give up and agree - yes it's a great life if you get great weather, an exotic destination, good driving routes and yes - plenty of time with the car. 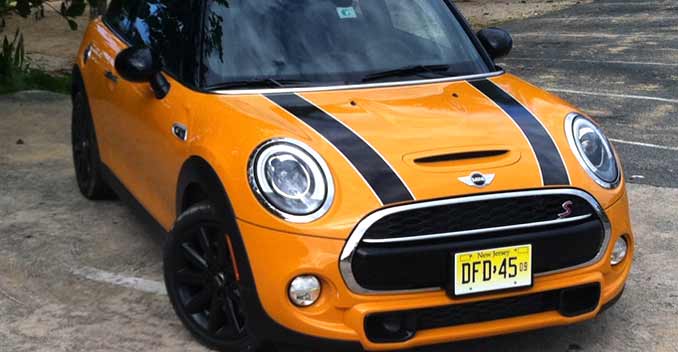 While I could be picky and say the latter two weren't completely fulfilled here, the drive for the 3rd generation Mini will certainly rank right up there for many of us, given it was the first time for the whole group on this island! Puerto Rico is a US protectorate, and has in the past been ruled by the Spaniards for over 4 centuries. And given how important the US and associated markets are for BMW and Mini, it was interesting to note that the Anglo-German brand chose the Americas as the global press drive destination. 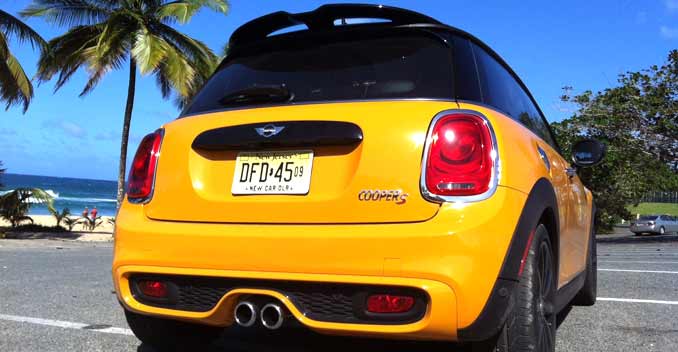 The new car has grown and has also grown up in many ways. In sheer size terms, the car is now 114 mm longer, which includes an extra 28 mm in the wheelbase, and is 43 mm wider too, though the Mini was always a short, squat car with a great stance and a firm, planted sort of feel. You do have to really take a long hard look at the car, to know it's new. Now I have to say, when I first saw the car being globally unveiled in November last year - at the Los Angeles Motor Show, my first impression was - c'mon guys - you could have done more to tell me it's really new. But then I guess every car doesn't have to always be a giant leap in styling terms, just because it must change. A Hyundai Verna going fluidic can be argued as a necessity, but for brands like the Beetle or Mini the car has to remain quintessentially what it was. And now having spent a whole day with the new generation car, I have come to appreciate the changes more.

So it's a new headlamp cluster - complete with a new LED daytime running light signature, and a new trapezoidal front grille. The tail lamps are also smart, and the bumper redesign is certainly aggressive and sporty. The bigger story lies beneath the hood. BMW has been brave and fairly radical when it announced that the 3rd generation of the Mini hatch would include a line-up of 3 cylinder motors - which have been worked on by BMW engineers as part of a new modular family of engines. The family also includes a 2 litre turbo 4 cylinder unit that powers the top-end Cooper S variant. The idea is to use a stacking of 500cc cylinder chambers, with the same 82 mm bore and 94.6 mm stroke, direct injection, and Valvetronic control. Also new are the two 6 speed gearboxes - a manual and an automatic. 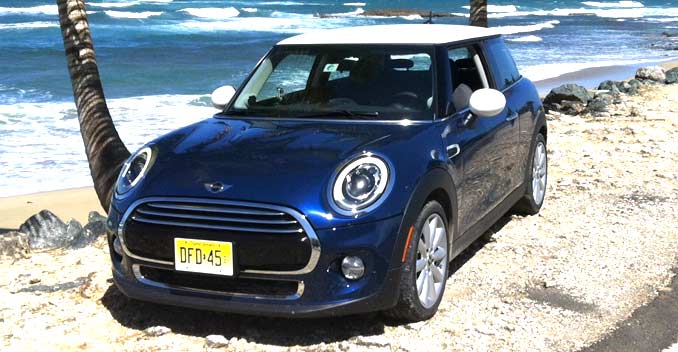 While the base Mini One variant will feature the 1.3 litre 3 cylinder engine, the cars I have at my disposal today are the 1.5 litre Cooper spec and the 2.0 litre Cooper S. There is also a 1.5 litre diesel three pot, but sadly that isn't here in Puerto Rico for us! The 3-cylinder unit on the Cooper hatch seems surprising. The car doesn't come across as underpowered, but can stall at lower speeds, since the clutch is a bit lifeless. But having said that, the engine sounds good, responds well - though takes its time revving - and does the job. Throw the car into Sport mode, and suddenly things change dramatically! Suddenly the little Mini turns a bit potent, and wants to play! The manual gearbox is a winner, with smooth shifts and a very notchy feel. 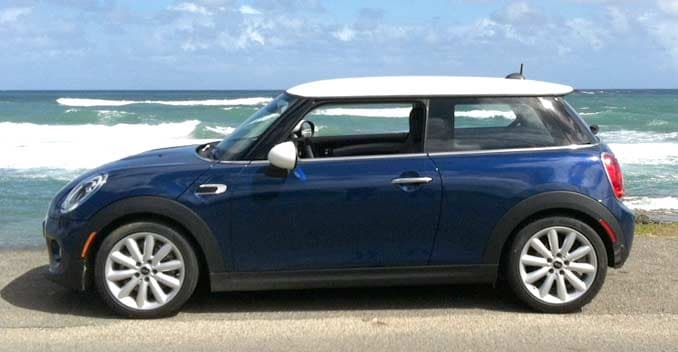 The car's suspension setup seems similar to the previous Mini's but that's more on paper with the struts up front and multilink suspension at the rear. But team Mini has certainly worked on this area, to make the ride a lot more comfortable, which is a boon on rough or broken roads. The car still feels sure, though as direct as the earlier one. Mini has also worked on the car's noise levels, with wind and mainly road-noise significantly reduced.

On the Cooper S, it is all of that and a whole lot more. This car has the 6-speed auto box, that's smooth, quick and very responsive. The gearshifts are imperceptible, and things get more fun with the paddle shift option. Of course, once again throw this car into Sport Mode, instead of the Mid or Green modes, and it becomes a raging, racy riot! Acceleration is superb, and more so when you want immediate power on the downshift. The Mini now handles very well, with a seemingly greater stress on cornering at higher speeds. The car was always planted, but now has a nonchalant sort of air abut it as it hugs corners, and makes it through rather nicely. The steering is very sharp and precise - and is better set up than on the Cooper. The car also has Start-Stop and the Green mode I mentioned, to give you higher efficiency.

On trim the car gets even better and slightly more luxurious. The infotainment screen is still huge, but now packs in more features. The control stalk has been replaced by a large rotary dial ala the BMW iDrive.

The new 3rd generation Mini is based on BMW's new UKL compact car architecture, which will see Mini and BMW brand vehicles emerge on it. Of course the BMW vehicles will be much larger than this car! The platform seems solid, with a lack of any major vibration or incongruity.

Mini has another winner on its hands. The new DRLs will no doubt become the talking point, as the car's face goes from impish and childlike to a bit more mature, upmarket and brazen. The Cooper S is the car to get if you want a stonking old time. But as I drove through winding twisty sections in the hills in north Puerto Rico, and indeed along its spectacular northern coast, it was the 3 cylinder engine on the Cooper that has impressed me. It's a sign of things to come, and the fact that Mini has turned to it so effectively bodes well for the future of turbo powered smaller engines from the more democratic brands too. Expect the new Mini in India over the next few months. Unlike the 2nd generation car, which was made solely at Mini's Oxford, UK plant, the company has said it will also make the 3rd generation in Born, Holland under contract with VDL Nedcar. This opens up the likelihood of CKD kits being shipped to India at last, which means we may get more price points on the hatch too, as we did with on the Countryman last year - which is made by Magna Steyr at Graz, Austria.

For more pictures, check out our gallery of the new MINI