The Ford Bronco makes a comeback after 24 years in the US market. It continues to look rugged but gets a bunch of modern equipment as well. We give you a complete lowdown on what the new Ford Bronco offers and before you ask, No! it is not coming to India. 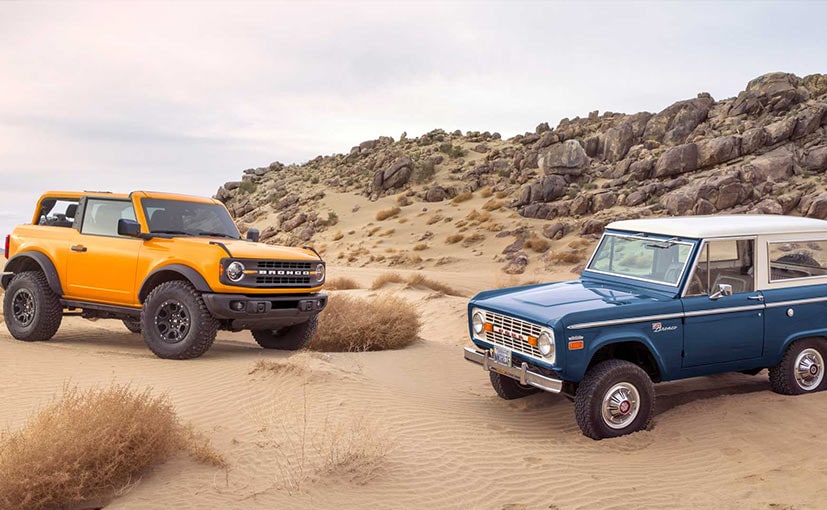 View Photos
The Ford Bronco brand makes a comeback after 24 years in USA.

Finally it's here! The all-new Ford Bronco could be one of the most anticipated launches of the year, globally speaking, of course! And before you get excited, we don't see it being launched in India any time soon. Ford took its own sweet time presenting the 2021 Ford Bronco given the big legacy it has to live up to. The last model was taken off the production line in 1996 after a production run of 31 years without losing its prominence and relevance in the US market. The new Bronco will take on the likes of the mighty Jeep Wrangler and Land Rover Defender both of which have been updated recently as well. On that, the Ford Bronco too will be offered in two-door and four-door variants like its counterparts while there will be an open top and a Sport avatar as well, just like we have seen on the Wrangler Rubicon. 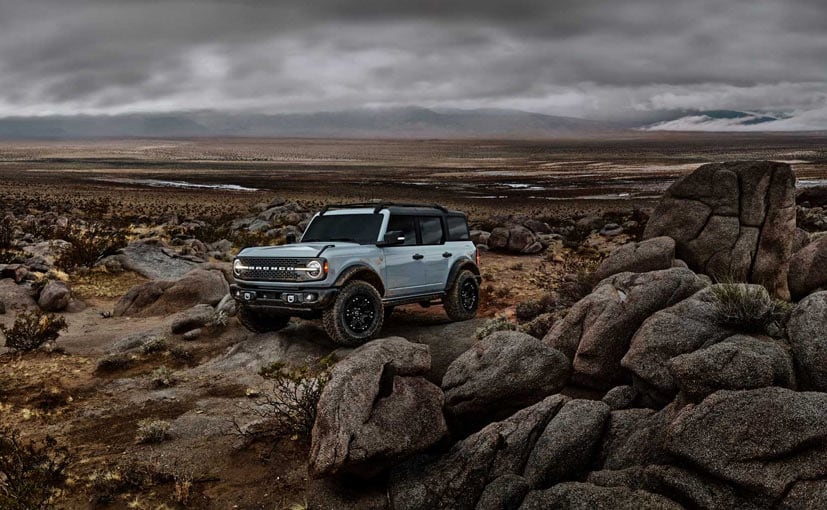 The Ford Bronco also gets the Sasquatch pack that adds a host of off-road features.

In Ford's words, "the new Bronco keeps toughness of an F-Series and the spirit of a Mustang intact". What's also taken into consideration is the practicality of it which is at its best in the four-door bodystyle. It also gets the Sasquatch pack that adds a host of off-road features like 35-inch tyres on 17-inch beadlock wheels to an upgraded off-road suspension and front and rear locking differentials. In terms of design, it has borrowed quite a few cues from the past models like the circular headlamps and bold Bronco lettering on the grille. Then the silhouette and outline will instantaneously remind you of the previous Bronco, just that this one has grown in size.

Also Read: 2021 Ford GT Available With Customisable Colour Options In The US 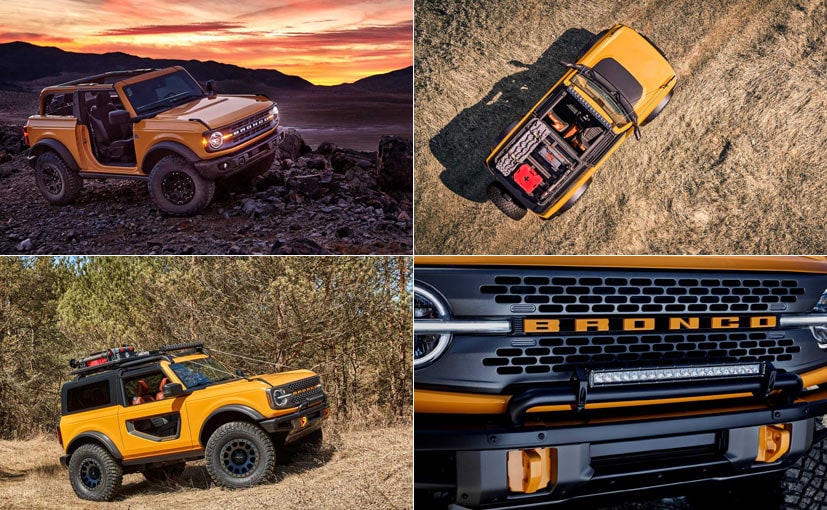 Despite the added flesh, all the Aluminium that has gone into its ladder-on-frame construction will keep a good check on the weight. Also, the Ford Bronco looks neat and tidy despite rough edges and upright angles. There's no overdoing of chrome or unnecessary sculpting. It's still simple, classic and very functional in its demeanour. The corners of the hood too has trail sight design cues from the 1966 Bronco. They do double up as turn indicators and there are tie-down straps for roof-mounted gear as well. The wing mirrors are mounted in the body itself instead on the doors so that they remain usable even when the doors have been taken off. 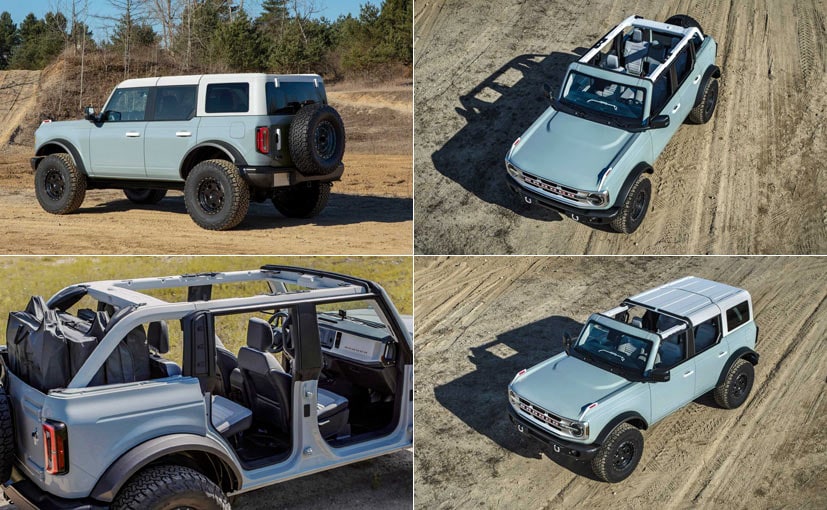 The removable panels in both four-door and two-door variants make the Bronco highly customisable and suitable for outdoors.

To elaborate a bit on the doors, the base models get a three-piece design with two removable front panels and a single rear section. An optional modular roof will add removable panels over the rear seats and cargo area. What's even more impressive is that the panels can be stored neatly on board in the cargo bay so you don't need to worry about finding a safe place for them. The four-door Bronco gets a soft-top as standard and the optional hardtop has four removable panels. 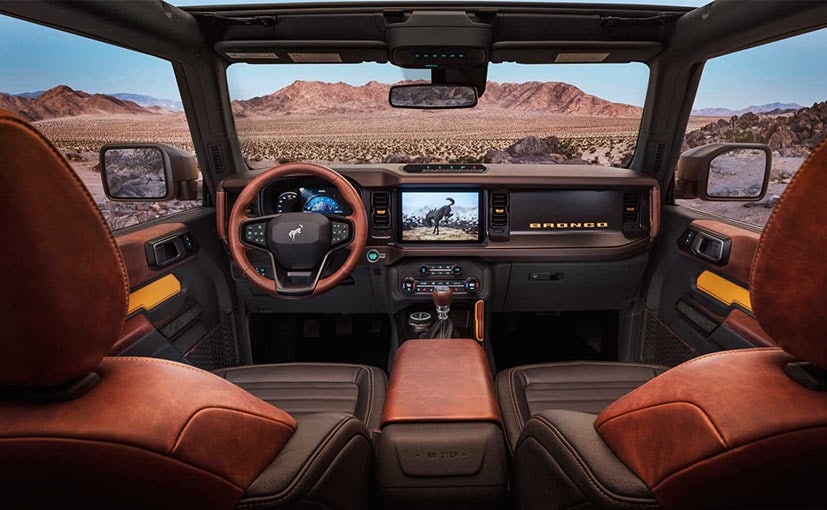 The cabin has been designed to optimise space and the rugged appeal without much exaggeration or adding fancy creature comforts. .

On the inside, it has borrowed elements from other models in the family, for instance the touchscreen, gear lever and steering wheel among others, but the design and layout is all-new, very functional and high on practicality as far as off-roading is concerned. In fact, the cabin has been designed to optimise space and the rugged appeal without much exaggeration and adding extra bulge to the parts. The integrated device rack, allows occupants to attach their phones, camera, or GPS unit without suction-cupping. There's also a 12-volt charging socket, big grab handles on the center console and the ends of the dash give both passenger and driver something to hold which can be customised with different items as well. The bold silver bolts with 'Bronco' lettering are inevitable and actually add to the raw appeal of the Bronco. Now speaking of interior trims, there's a marine-grade vinyl upholstery on offer with both active and passive drain plugs in the rubberised floor. This is done in a bid to free the owners from worrying about getting wet on the trails or cleaning the SUV in the monsoon when driving without removable panels. 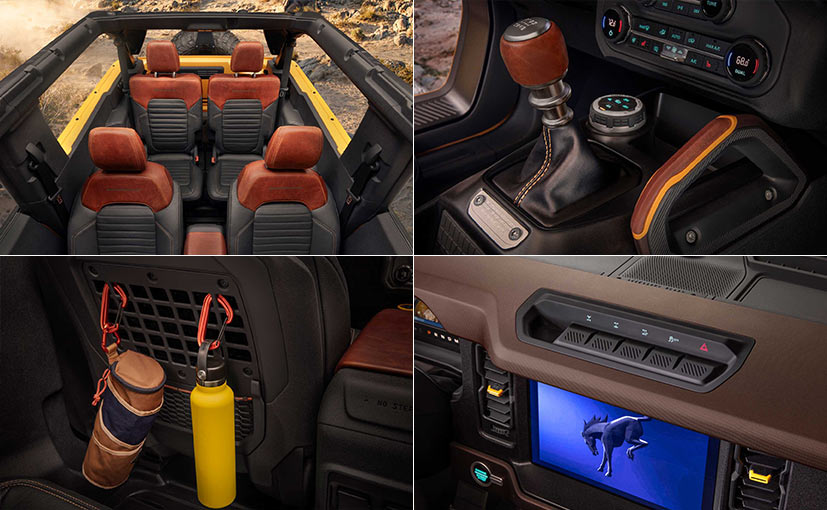 It gets several hooks and mounts inside the cabin which come really handy while off-roading.

The Bronco gets an advanced suite of driver assistance systems over the sturdy and dependable 4x4 hardware. There are off-road tyres, diff-lockers, low-range gear, disconnecting sway bars and a trail toolbox. There's also a trail control system which essentially is a cruise control for off-road, and trail one-pedal drive that helps it crawl over the toughest of rocky surfaces. Then the trail turn assist gets torque vectoring to help decrease turning radius in a bid to make switchback corners easier.

There's a marine-grade vinyl upholstery on offer with both active and passive drain plugs in the rubberised floor.

Also on board is an advanced 360-degree camera system. You get the display view in the 8.0-inch touchscreen infotainment system while owners can also upgrade to a bigger 12.0-inch unit along with over 200 options of factory fitted customisable kit to choose from. It gets Ford's most advanced Sync 4 unit, supporting wireless Apple CarPlay and Android Auto. Additionally, it gets a host of in-built apps for off-roading and exploring, including over 1,000 pre-loaded trail maps and a trail tracking system. 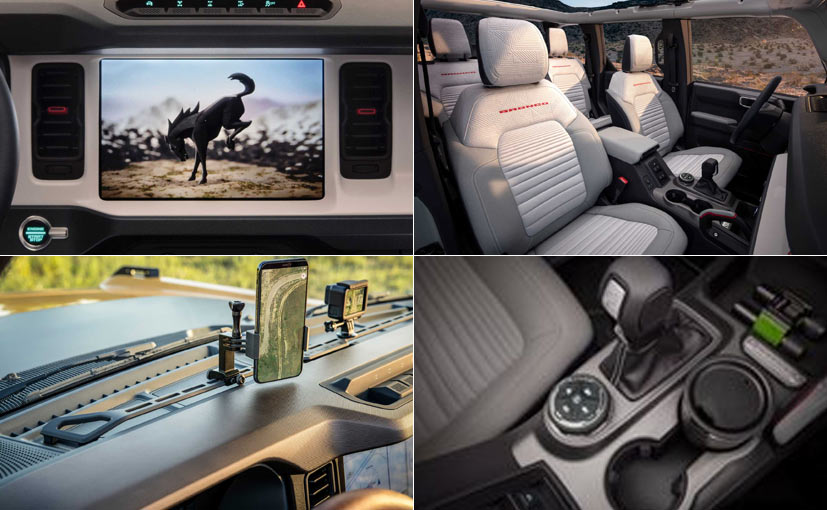 It gets the 8.0-inch touchscreen infotainment system and phone mounts on the dashboard, while buyers can also upgrade to a bigger 12.0-inch unit.

Pricing and deliveries for the US market is yet to be revealed. We really wish Ford brought this car to India but like we mentioned earlier in the story, it is not going to happen anytime soon.