Dwayne Johnson's Next On-Screen Car Is A Porsche Taycan But He Can't Drive It. Here's Why

The Porsche Taycan is part of Dwayne Johnson's next production Red Notice, but he couldn't drive the electric supercar. Read on to find out why. 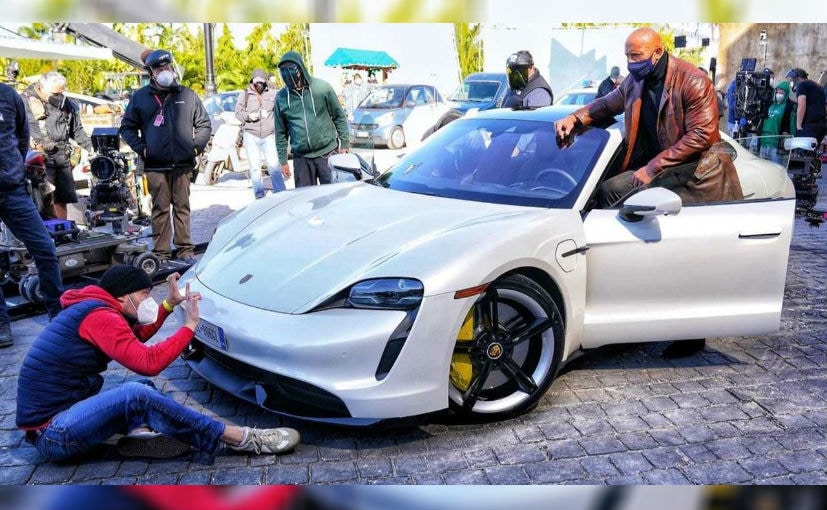 Hollywood action star Dwayne 'The Rock' Johnson is known to flex muscles, drive heavy-duty cars, raise an eyebrow and save the day, all in a span of two hours on celluloid. What we are trying to say that Johnson is one of the world's highest-paid movie stars and can do it all. Well, apart from driving a Porsche Taycan. Surprised? Well, so was he. And before you jump to any conclusions, no, it is not as if the actor is not fond of driving electric cars, but the problem is "wider" than that, as he can't fit inside the Porsche Taycan.

Dwayne Johnson found out about this the hard way while shooting for his upcoming flick 'Red Notice' for Netflix. Narrating the incident in an Instagram post, the actor said that the Taycan was part of a big chase sequence that took months of preparation and high production costs, which included buying the electric supercar and shipping it to the filming location. When the time did come to shoot the scene, writer and producer Rawson Marshall Thurber instructed The Rock to step inside the car only to realise that his back "is a bit too wide."

That's a problem we don't think anyone anticipated but given Johnson's height of 6 and a half feet, it's a problem that does exist for the actor. Nevertheless, the production crew did manage to get the necessary shots making use of some creative angles to do the same. That being said, it would be safe to say that the actor hasn't done the car stunts himself on this one.

In fact, this isn't the first time Johnson made a post about it on social media. Back in 2015, the Jumanji star had a similar issue with fitting in the Ferrari LaFerrari that was being used during the shoot of the HBO series Ballers.

Posted by Dwayne The Rock Johnson on Sunday, 22 November 2015

For the better part, it will be interesting to see the Taycan on screen in an exciting chase sequence. The movie Red Notice is currently in the production stage and will be out on the streaming platform in 2021. The movie is Netflix's most expensive yet with a budget of $188 million and also stars Gal Gadot and Ryan Reynolds. The film was originally slated for release this year but production was halted due to the pandemic with work only resuming in September this year.