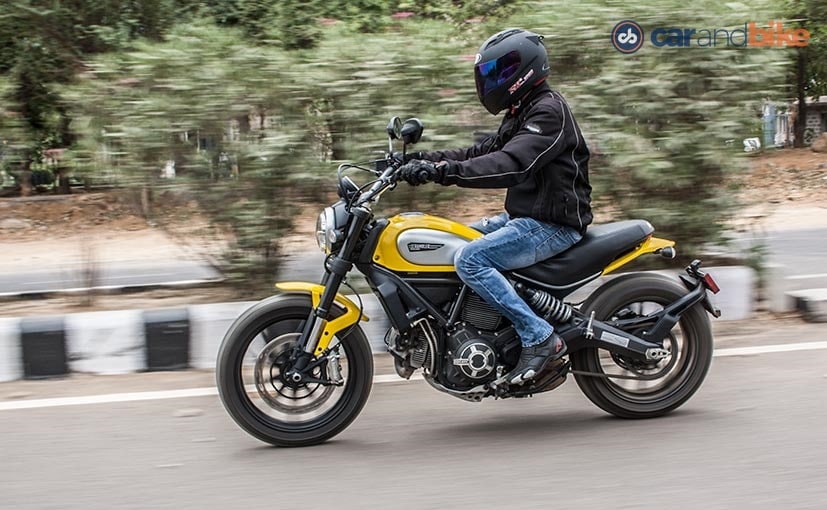 The first Ducati Scrambler motorcycles were built primarily for the American market, from 1962 and were in production till 1974, with engine displacements ranging from 250cc to 450cc. The first Ducati Scramblers acquired immense popularity and cult status in the late '60s and early '70s. The term Scrambler though has evolved over the years and has come to be associated with a road motorcycle which has some off-road capability.

The new Ducati Scrambler is a neo retro motorcycle in the truest sense - and its design is something which Ducati says is "post heritage" - a contemporary take of the iconic Scrambler built back in the 1970s. And Ducati says the new Scrambler is intended to be just how the legendary bike would be today, if Ducati had never stopped building it.

What's instantly likeable is the simplicity of the bike - in its design, proportions and just the way the overall bike looks. The classic round headlight gets modern with an LED powered light guide around it, and the instrument panel is modern too, in the sense that it's a LCD screen but a single-pod unit, with read outs for speedometer, tachometer, service interval etc. What is sorely missed though is a fuel gauge, although the Scrambler does flash a low fuel warning light. 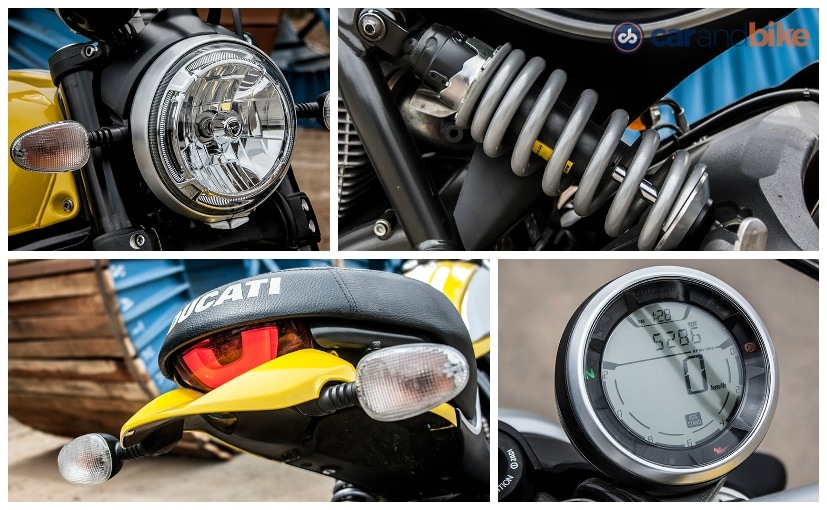 Modern motorcycles will have the throttle and brake cables tucked away neatly, but the Ducati Scrambler has exposed cables, certainly harking back to motorcycles of the '70s. Opinion may be divided on the exposed cables, but for us, it certainly adds to the 'classic' feel of the bike. The tear drop shaped fuel tank looks retro too, but the exposed tubular steel trellis looks more contemporary.

The bike's rear end looks more modern with a LED taillight, nice-looking side mounted number plate and a side-mounted mono-shock suspension. The fat dual-sport Pirello MT 60 tyres also give the Scrambler quite a bit of appeal for that on-road, off-road, go anywhere, do anything kind of look.

With a 186kg kerb weight, the Ducati Scrambler weighs almost as much as a Royal Enfield Classic 500, but the weight is evenly balanced and you don't feel it at all. Swing a leg over it and the first thing you notice is the wide and tall handlebar, and the seat height; at just a shade over 800mm, you can comfortably plant both feet flat on the ground. And that makes the Scrambler an easy bike to straddle for riders of all kinds of height. The Scrambler is powered by an air-cooled, L-twin, 803cc engine which makes 75bhp of maximum power and peak torque of 68Nm at 5,750 revs. The engine note may not be very impressive and the L-twin engine does show its slightly vibey nature, but that's more the character of the engine than anything to be alarmed about. Of course, riders used to parallel-twin engine configurations may not find the Ducati Scrambler's L-twin as smooth and refined. But all those talk about refinement and smooth power delivery are obliterated as soon as you put the bike in gear and open the throttle. 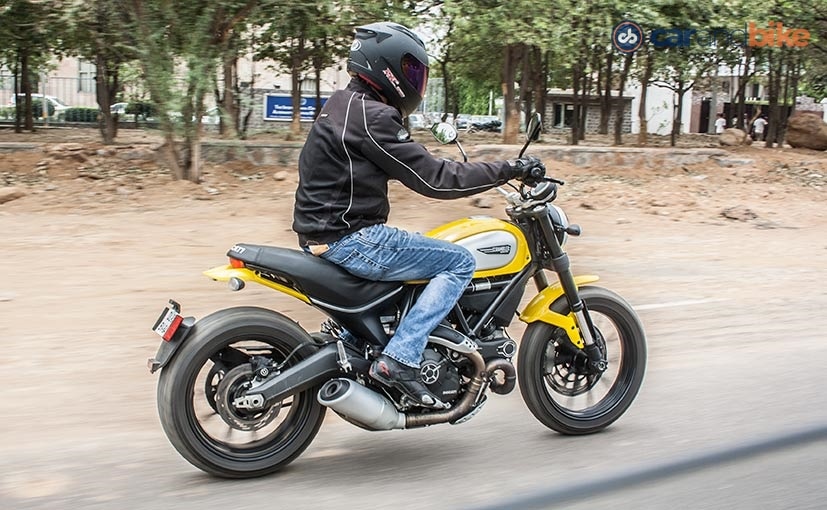 The throttle response is a bit jerky and may surprise you; the bike lurches forward as soon as you open the throttle, but the torque kicks in nice and strong and acceleration is very impressive. Click through the gears and in no time you would have crossed the legal speed limit before you hit sixth. There's ample mid-range power and a wide spread of torque that certainly makes for a very entertaining ride.

The transmission is precise and slick, and the short ratios are a pleasure to work in city traffic. The L-twin has got enough grunt and juice, whether you are tackling traffic on the daily commute or on the weekend jaunt. It's only towards the top end that the Scrambler loses some steam, but you wouldn't really want to rub shoulders with litre-class sportbikes on the Scrambler anyway. 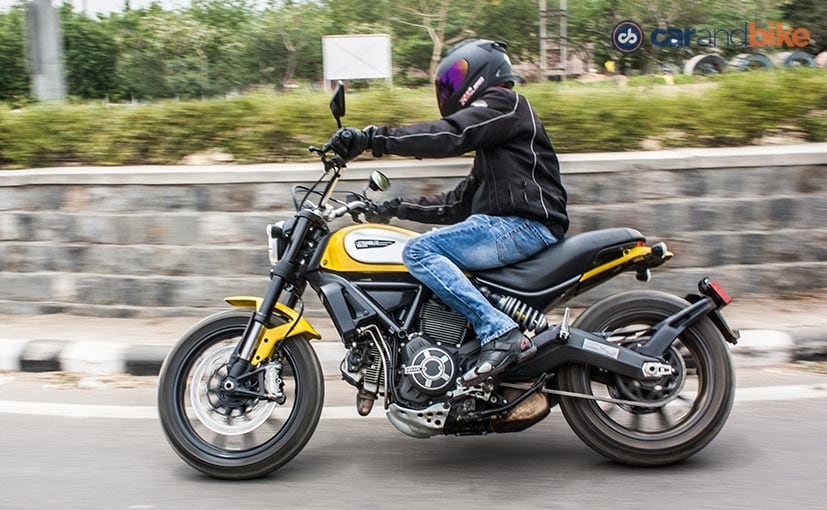 The riding position is upright, with slightly rear-set footpegs, but it's comfortable and makes riding the Scrambler feel easy, even for inexperienced and newer riders. The tall and wide handlebar is comfortable enough for quick steering inputs and the front end is quite communicative; so taking on turns, or even manoeuvring through traffic is intuitive and confidence inspiring. It's a sure footed motorcycle, and even taking on the occasional dirt road, thanks to the dual-sport Pirelli MT 60 RS tyres, is not a problem at all. 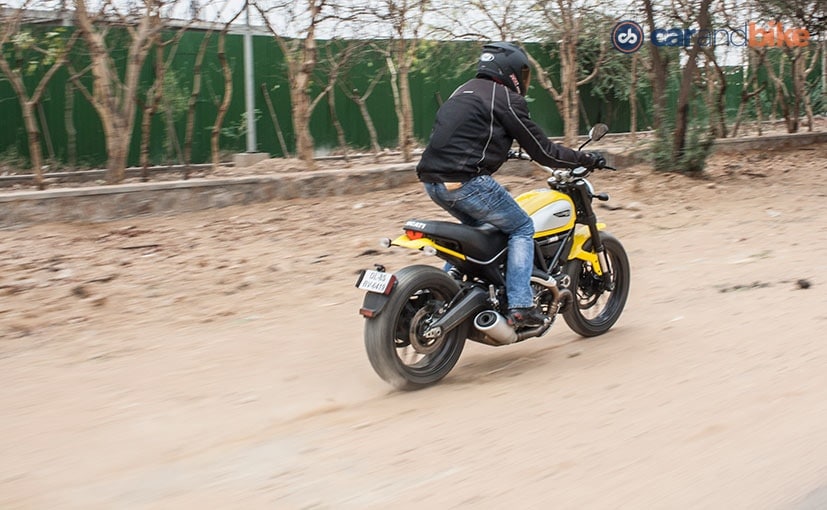 The suspension is on the stiffer side; front is a 41mm upside down Kayaba fork, while the rear is a side-mounted single shock also from Kayaba. The fork doesn't allow any adjustments, but the rear is adjustable for pre-load. The stiff suspension may not be particularly plush, especially for a pillion, but it offers taut handling, and gives the Scrambler a 'point and shoot' personality.

Coupled with the punchy engine, it makes for an enjoyable motorcycle. There's just a single 330mm disc up front and a single 245mm disc at the rear, but they come with switchable ABS as standard. They offer sufficient bite and progression, and work quite well in shaving off speeds quickly. On the flip side though, the Scrambler isn't a bike for prolonged time on the saddle; the seat is well-cushioned but after a few hours in the saddle it starts feeling uncomfortable. 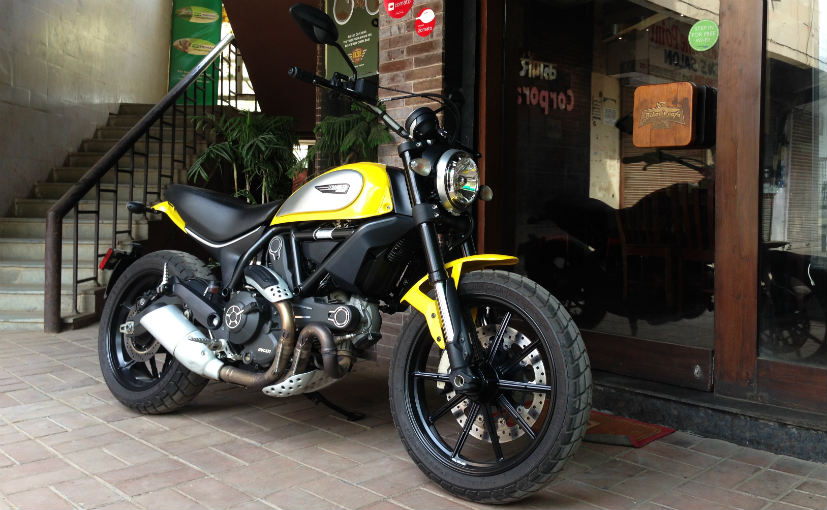 It's not a very big bike, but definitely a headturner, and it's so much fun to ride - isn't that what motorcycles are supposed to be? What the Ducati Scrambler offers is a simple, enjoyable motorcycle with which you can commute, do the early morning weekend run with your biker buddies and even the occasional long distance tour, if you're so inclined. At Rs 6.8 lakh (ex-showroom Delhi), the Scrambler competes against the likes of the Triumph Street Twin and the Kawasaki Versys 650.

Is it worth considering the Scrambler? Certainly, if you want a ride which is stylish, fun to ride and makes a statement. It's not very big, and it may have limitations if you're the touring kind, but the Ducati Scrambler is a package that has 'fun' written all over it, and that's reason enough why anyone with a love for motorcycles should take a ride - and that makes it a very attractive proposition.