We compare the updated versions of the Honda Activa and the TVS Jupiter. Both get BS IV engines and auto-headlamp (AHO) feature. 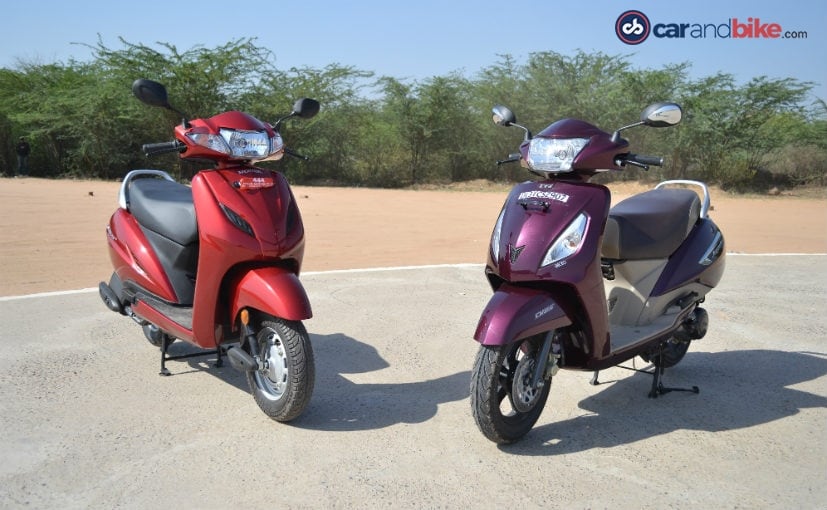 The battle of the ages! The Honda Activa has always been the highest selling scooter in India. While the TVS Jupiter hasn't registered the kind of sales numbers the Activa did, it surely is a quality product and has the goods to take the fight to the segment leader. It is not as if both the scooters are all-new products. But with the 2017 models coming in, we just couldn't resist pitting these two scooters together again, just to see if the subtle updates are worth anything or not. The last time around we had the Honda Activa going up against the TVS Jupiter and the Hero Maestro Edge; and it was the Jupiter which won the three-way comparo. Apples to apples, then! 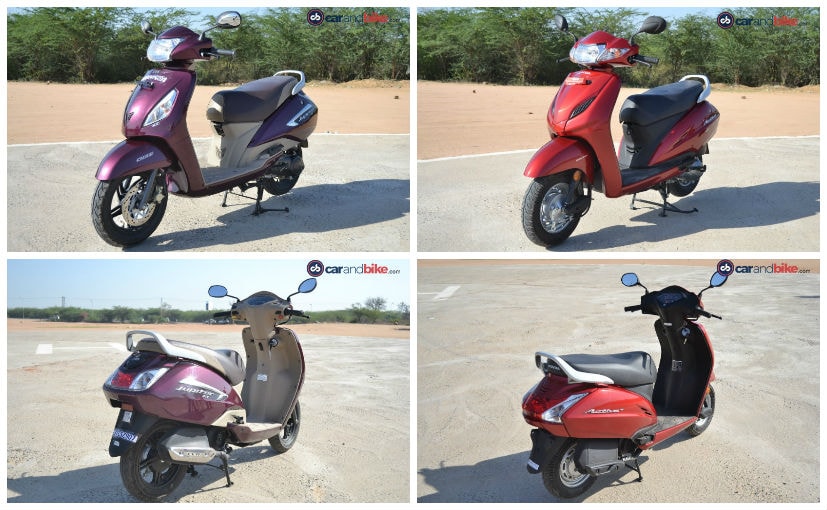 (Both scooters get subtle styling updates)

In all honesty, the looks of both scooters remain the same. For 2017, the Activa 4G was launched with two new colours of Matte Selene Silver Metallic and Matte Axis Grey Metallic. The front panel though, sees a slight revision with different lines. Rest, the bodywork remains the same. Similarly, the Jupiter was also launched with two new colours of Jade Green and Mystic Gold. What adds a hint of premium touch to the 2017 Jupiter are the chrome bits on the rear-view mirrors, indicator housing on the front and the side panel as well. 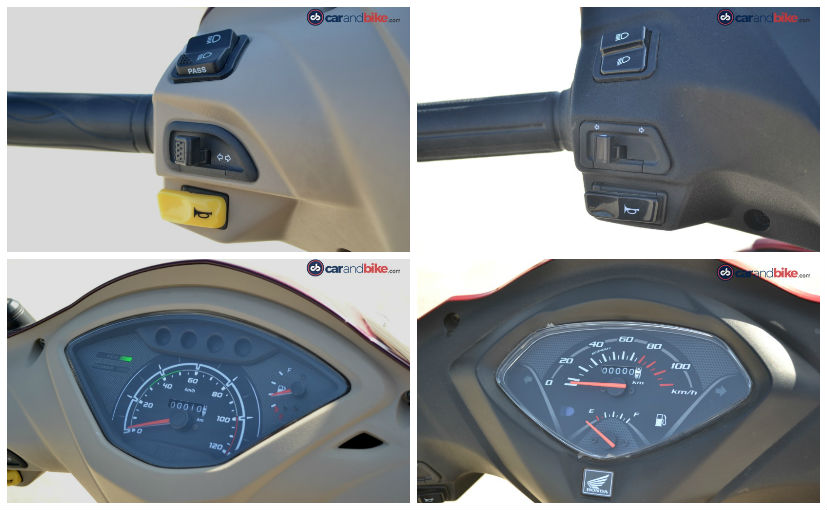 (The TVS Jupiter gets more features than the Activa 4G)

Straightaway, the Jupiter wins this round here! It is a scooter which has been designed to make your life as easy as possible. You get an external fuel-filler cap which saves you the effort of lifting up the seat every time you need to fill up. It gets a pass-switch, which is an important feature to have while riding at night. Should you wish to charge your phone, you can also ask TVS to fit your Jupiter with a mobile phone charger as well. It always had 12-inch tyres with alloy wheels and telescopic suspension. Coming to cycle parts, the Jupiter can also be specified with a disc brake up front.

On the features list though, the Honda Activa 4G pales in comparison. It still gets the old trailing link suspension unit at the front and steel wheels. Optional extras include a side stand, number plates for the front and rear and the mobile phone charger fitment. Honda does not offer a front disc brake either, even as an option. Some more features on the Activa 4G would have been certainly welcome. Of course, both the scooters get the auto-headlamp on (AHO) feature along with the BS IV compliant engine. 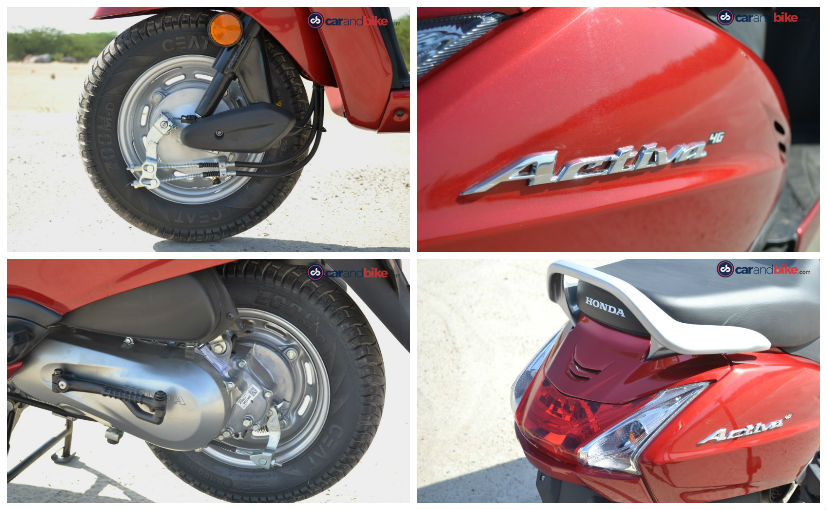 (The Honda Activa is the largest selling scooter in India)

Apart from being BS IV compliant, the engines on both the scooters remain the same. Both scooters come with motors with similar displacement and power output. 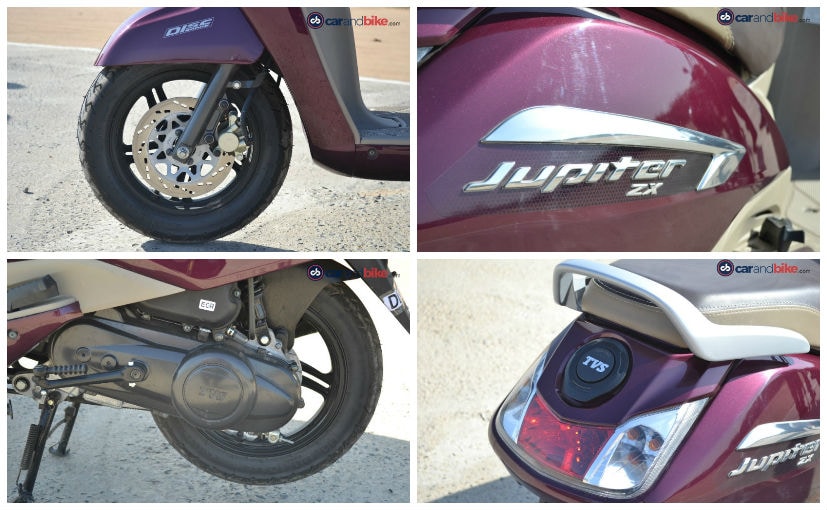 (The 2017 TVS Jupiter gets front disc brake as an option)

The engine on the Honda retains its characteristic refinement and peppy quality. There is absolutely no issue while overtaking slower vehicles in the city. You will not run out of steam if you time your throttle right. The engine performance of the Jupiter stands up to that on the Activa 4G, though not as smooth. It is definitely not a deal-breaker though. If it were to interest you, the exhaust note on the Activa 4G is better than that of the Jupiter. 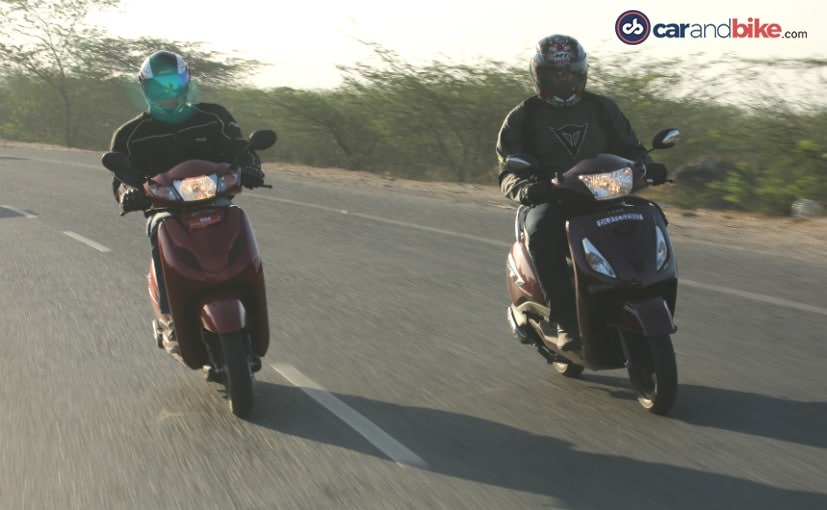 While the Activa 4G just about edges out the Jupiter on engine and performance, it is the other way round in the ride quality department. Simply put, the Jupiter, with its 12-inch tyres and telescopic suspension offers better riding comfort than the Activa. The Jupiter also outshines the Activa when it comes to braking (thanks to a 220 mm disc brake upfront) and holding line under severe braking. The Activa 4G does come with Combined Braking System, but the front disc on the Jupiter gives it better stopping power. In all the Activa 4G has a stiffer ride, which no doubts aids in handling, but ride quality suffers on bad roads. On good roads, there's little to complain about though. 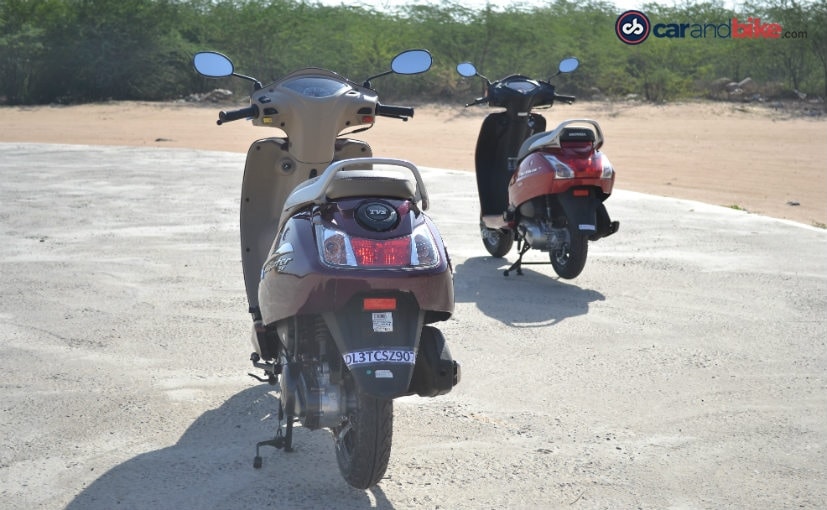 Without a shred of doubt, the Activa brand name has been the king of the ring ever since it was launched and still remains to be. But with the coming of the Jupiter, it was always in danger of being dethroned. And dethroned it has been! At least in terms of convenience and value for money. The Activa 4G is offered in just one variant, at a price of ₹ 50,730, which is good pricing. At the same time, the TVS Jupiter could be purchased in three different variants, which are the standard, ZX with sync-braking system (similar to Honda's CBS) and the ZX disc brake option. The prices for the same are given below.